Unusual tanks of Russia and the USSR. Tank Dyrenkova DR-4 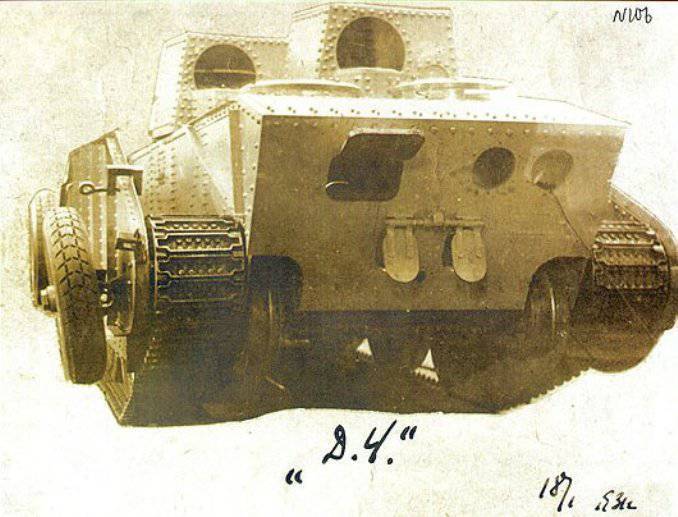 In the late 20s and early 30s, tank building developed rapidly in the USSR. tank The Red Army fleet was replenished with new machines of both domestic design and those created on the basis of foreign models. Understanding the need to equip armored units with combat vehicles only of their own production, the government of young Soviet Russia created favorable conditions for promoting projects of talented engineers and designers. One of these self-taught engineers was Nikolai Ivanovich Dyrenkov (1898 - 1937), the creator of a large number of models of armored cars, armored cars and tanks. Many of his creations remained only on paper, some were released only in the form of prototypes and prototypes, but among them were those that were accepted and put into small-scale production. He also took a direct part in creating the hull for the light tank A-20. In this article, we will talk about one of his projects, known as D-4, also called “Dyrenkova tank”, DRS, or simply “tank D”. 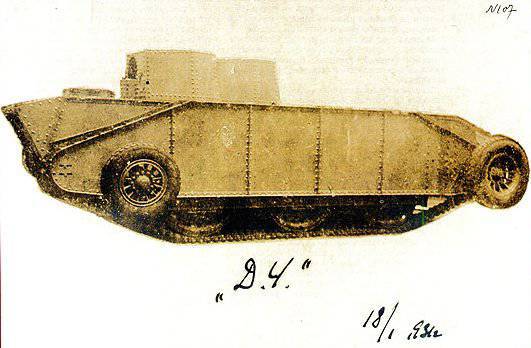 In the RVS of the USSR 5 in October 1929, N. I. Dyrenkovov presented the project of an average wheeled-tracked maneuvering tank. Already on November 18, the commission heard a report on the features of this project, on the basis of which the decision was made: "It is advisable to test the tank of system D, with the aim of giving an urgent order to Izhora plant for 6 prototypes of the tank with a deadline of the first tank no later than April 1 1930 of the year. " In December 1929 of the year N. I. Dyrenkov creates an experimental design bureau at the Izhora plant, becomes its head and starts to implement his original project, which received the designation D-1930 in 4. According to the designer’s calculations, the tank should have a combat mass of 12 tons, with armor thickness from 15 to 20 mm. Armament - two 45-mm cannons of the Sokolov system and four 7,62-mm DT machine guns (Degtyarev Tank) - located in two towers located in the front part of the body with a slight diagonal offset. Although initially it was assumed that the tank would have three towers, but the particulars of the undercarriage did not allow to increase the mass of the car, so it was decided to abandon the three-tower scheme. Chassis of the car deserves special attention, it was a wheel-track, covered with an outside armored screen. 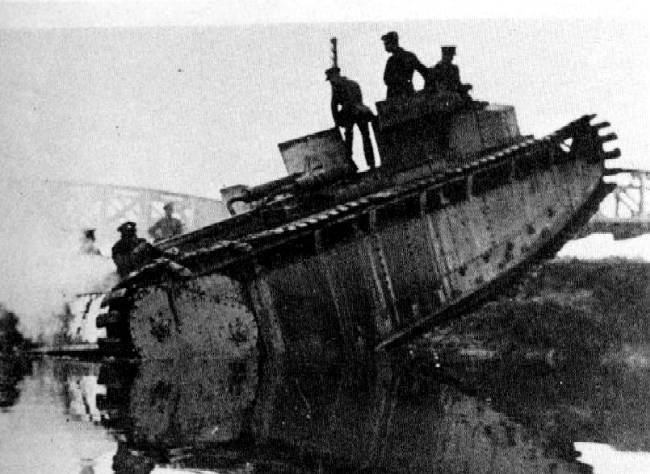 The tracked propulsion unit, on board, consisted of a leading sprocket, a sloth, and two large-diameter rollers. As an option, the use of three pairs of small-diameter support rollers supported on horizontal lamellar springs, which were mounted on a steel box located between the screen and the tank armor, was considered. On the outside of the screen, on the axles of the driving and driving rollers, there were fastened automobile wheels, the rear pair of which was the driving one. If necessary, with the help of jacks driven by the engine, a box with pairs of support rollers attached to it was lowered or raised, thereby lowering the car onto wheels or lifting it onto a tracked vehicle. Equipped with a reverse system, the tank could move both forward and backward at the same speed. Also, the design provided the opportunity to move under water and move independently by rail, for which railways were installed under the bottom of the hull.

The power plant consisted of two engines "Hercules" hp power 105. For various reasons, the project was delayed, and only in March 1931, the “Dyrenkov tank” made its first exit. The tank did not justify the hopes placed on it, the actual weight was more than 15-ti, which significantly exceeded the calculated one, the design of the undercarriage was not carefully thought out and did not have a reserve for modernization, the engine power for movement with the estimated speed was no longer enough. The tank could hardly move even on solid ground, the possibility of moving off-road and in combat conditions was out of the question. It turned out that the transmission of the car is unreliable and requires serious improvement. However, the designer by that time was fascinated by the new project, known as the D-5, and the D-4 project was abandoned by him. Soon all work on it was discontinued, the tank was dismantled for scrap. Like the D-4, the D-5 project was not completed; in November 1931 of the year only a tank model was built on the 1: 1 scale, but the 1 of December 1932 was disbanded. From the report of G. Bockes to the Chief of Mechanization and Motorization of the Red Army I. Khalepsky: “You already know the sad experience of making an experimental model of the D-4 tank, as a result we did not receive the car, but only spent about a million rubles of public money. 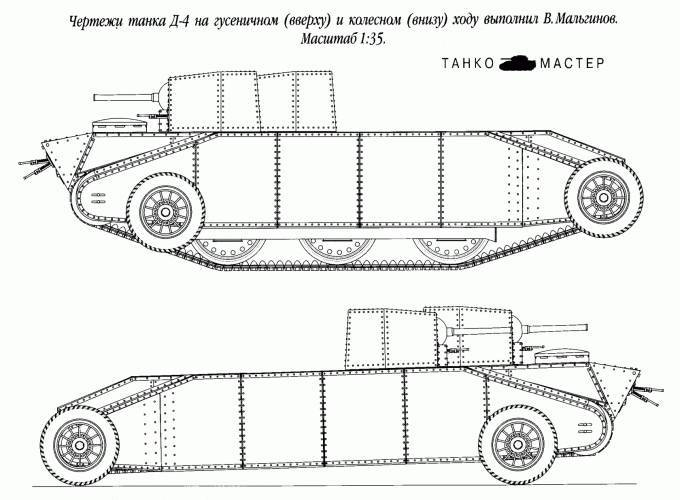 The designer Dyrenkov himself, apparently, decided that nothing would come of this car, and therefore he abandoned the D-4 design and proceeded to redesign the tank in the D-5 type. I have big doubts that something will come out of this car, and whether millions of rubles will not be spent again, and as a result we will again receive a box with different inoperative mechanisms. The fact that the D-5 machine retains the basic D-4 mechanisms convinces me of this. ”Later, in 1937, N. I. Dyrenkov was arrested on charges of participating in a terrorist organization and 9 of December 1939 was shot.

Ctrl Enter
Noticed oshЫbku Highlight text and press. Ctrl + Enter
We are
"Tank Dyrenkova": everyone wants his own ceiling ?!Camouflage tanks of the Red Army westward
25 comments
Information
Dear reader, to leave comments on the publication, you must to register.