Unusual tanks of Russia and the USSR. Mendeleev's tank

In this article we will talk about the first heavyweight project tankincluded in history as "Mendeleev's tank." Vasily Dmitrievich Mendeleev (1886 - 1922) developed the design of his super heavy tank in the 1911 year. Working at 1908 - 1916 as a designer at a shipyard, in his free time he thought about how to create such a machine that would be well-armored and invulnerable for gun and artillery fire, had crushing fire power and could fulfill any combat task . As we know, he was a naval engineer, and in his creation one can trace the basic concepts of the construction of ships of that time, in particular battleships.

On August 24, 1916, V. D. Mendeleev submitted the draft for consideration. It should be noted that the project was developed very carefully, to the smallest detail. The machine, according to the designer, resembled a land battleship rather than a tank familiar to our understanding. However, at that time, by analogy with the sea, tanks were called land fleet. The design of the tank, although the name of the self-propelled gun is more suitable for it, was a box-shaped hull 10 m long (length with a gun 13 m), 2.8 m high. Reservation: forehead 150 mm (solid plate), side, feed 100 mm (solid plate ), the roof is 76 mm (assembled from five cast plates), which was a very high rate at that time. Such armor could withstand a hit of 152 mm. The car was virtually invulnerable to anyone weapons At that time, for its destruction it would have taken a direct hit of at least an 305-mm projectile of a naval gun, here V.D. Mendeleev was the first engineer to use counter-booking. The running gear of the car was based on a pneumatic suspension of support rollers (onboard 6 small-diameter support rollers, 5 supporting and 4 guides, the upper rear wheels were leading), which allowed the car to change the ground clearance or even sink to the ground with heavy shelling to avoid damage to the undercarriage parts. It was also supposed to lower the hull to the ground to increase the accuracy of shooting. VD Mendeleev, taking into account the impressive weight of the car, provided for the chassis design the ability to move by rail by installing on special carts on wheels that could be driven by the engine of the car, allowing it to move by rail independently. The landing of a crew of eight (commander, mechanic, helmsman, gunner, machine gunner, three gunners) and loading of ammunition was carried out through the door, located in the aft armor.

The car also provided for internal lighting from the electrical system. The estimated mass of the machine is 172 tons, with a specific pressure on the ground no more than 2,7 kg / cm2. Estimated speed - 24 km per hour, when the power of the carburetor engine with water cooling in 250 horsepower. The engine was located in the rear part of the hull with a slight displacement to the left side, behind the fuel tanks located in the center of the armored hull, the tanks of which were enough for the vehicle to go 50 km without additional refueling. The tank had a mechanical transmission with a four-speed gearbox, 4 - forward, 1 - back. On the roof of the hull there was a rotating retractable machine-gun (one 7,62-mm Maxim machinegun) cylindrical turret with a circular firing sector, which in the stowed position was lowered inside the hull. The turret booking was 8 mm. The disadvantage of such a deployment was the presence of dead zones, but the project provided for loopholes in the sides of the vehicle for firing crew members from personal weapons. The main armament, the Koné 120-mm naval gun, was located in the front armor plate, with a swiveling armored cannon mask, which was one of the main features of the design, the angle of the horizontal pickup was 16 °. The shells were fed along a pneumatic suspension monorail, thereby significantly increasing the rate of fire of the gun. The Kone gun at that time had almost no indestructible targets. By all indications, it was a formidable and majestic war machine, which was on the shoulder the most difficult and dangerous missions. But the story of this project was over. Later, in the fall of 1916, V.D. Mendeleev again tried to present the design of his car, which had already been upgraded to the combat use of British tanks, but was not considered. There is almost no data about this project. 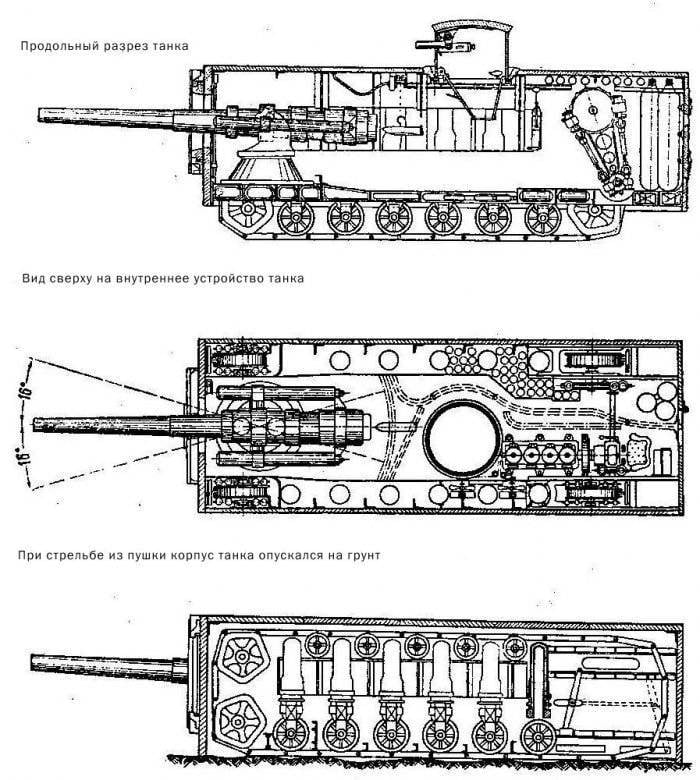 Although this project remained unfulfilled in reality, it was an important stage in the history of the development of tank building. Neither the project itself, nor its thorough elaboration interested the military department, it was not accepted for consideration and was put on the back burner, like many other similar projects.