Serdyukov: the army must be undisturbed, professional and mobile 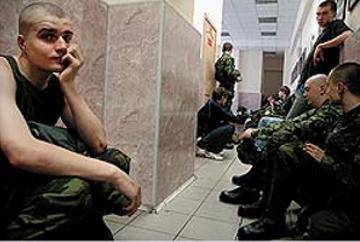 The second autumn month began, which means that the Presidential Decree on invoking young men for military service came into force. First time in stories In our country, the number of those who join the ranks of the Russian army is only 135850 people. This figure suggests that by the summer of next year, the number of Russian armed forces will be reduced to about 800 thousands of servicemen (along with sergeants, warrant officers, officers, generals and cadets). The Minister of Defense of our country, Mr. Serdyukov, declares that it is not necessary to draw from a reduction in the number of draftees of hasty conclusions about the fact that the army is collapsing. According to him, the missing number of soldiers in the near future will have to compensate the contract. He also says that the Russian army should be unbreakable, professional and mobile.


Such upheavals in the Russian army shook the public and divided it into three main groups that see army reform from different angles. The former fully support Mr Serdyukov and declare that at this stage Russia does not need a huge army, in which soldiers, who can’t understand or understand anything in military affairs, “empty their service life” in vain. The second states that reducing the number of recruits will inevitably lead to the destruction of the army, and therefore increase the vulnerability of state borders. Still others take the position that reform is an objective necessity for the Russian armed forces, but it should be carried out without, so to speak, “burning bridges”.

Of course, you need to understand that the state in which our army has been in the past one and a half or two decades is a real threat to national security. The method of recruitment, according to which everything was recruited indiscriminately to the army, has long outlived itself. For obvious reasons, you need to try to break the stereotype of the modern Russian army as an awkward corruption education that is imbued with remnants of the old security system.

The position of many analysts, according to which it is impossible to abandon the old principles of recruiting troops into the army, is surprising. If the army call to try to leave at the same level, then the army will have to call either the disabled or recruit reservists. Such a demographic situation in Russia. The monstrously low birth rate in 1993-94 leads to the fact that there is often no one to call for. Well, who needs such an army, where, for the sake of preserving the number of one million people, the military registration and enlistment offices will be involved in writing posts and call upon unhealthy citizens, who themselves must be protected. If today we conduct a large-scale audit of the health and level of education of Russian conscript soldiers, then the following tendency will be revealed: young people with full bouquets of diseases fill the troops and those for whom even the secondary school program turned out to be too complicated. What kind of modernization of the armed forces with such personnel can we talk about? It's not as easy as buy gold wow.

Therefore, the option of increasing the percentage of contractors is understandable. But in this case, you need to know how modern contract soldiers serve in the Russian army. From a personal example of communication with sergeants serving under a contract, I can say that a certain percentage of these people, when signing a contract, think only of material remuneration. In our time, this is an objective reality, from which it will not be possible to leave. And if a person protects the borders of the Fatherland, keeping in mind only a visit to the accounting department at the end of the month, then this is unlikely to benefit the service itself. And is it possible to be sure that such a soldier will fulfill the conditions of the contract at the moment when he begins to face a real danger.

The Minister of Defense, echoing President Medvedev, states that in the near future the salary of those serving under the contract will be about 35000 rubles. On the one hand, this can be considered a good incentive for signing contractual obligations with a large number of military personnel. However, the Russian army has never been based solely on the material component. Money, taking root in any sphere of human activity in Russia, can not only stimulate, but also corrupt. And if before they went into battle (to certain death) for their Motherland, then today it is difficult to imagine that someone will die for money.

The government also needs to develop an alternative incentive system: career growth, housing (real provision, not empty words), assistance to the families of young military personnel, social guarantees and, of course, the ideological basis. In other words, everything that had to be abandoned after the collapse of the USSR. An army without ideology is dead.

Recently, one of the Russian TV channels revealed quite contradictory information. It turns out that the Ministry of Defense and other departments are recruiting contract soldiers, passing applicants through the crucible of competitive examination. These words can be treated with irony, if you look not at an exemplary part with a pool and gym, but at the most shabby military unit in the Russian outback. Fear God, well, what kind of competition can we talk about if the rotation of contract personnel here reaches 50% per year. Someone is retired, someone is transferred to another part. Why? Yes, because all those promises that are spoken about on television are sometimes not fulfilled one iota. They talk about 35000 rubles - it means that the contractor will receive "hands" no more than 20. After all, it has not been a secret for a long time that fathers-commanders equip in their units real fortified points on extortion of funds. In memory, the story of the pilot of one of the elite squadrons, who told President Medvedev how the unit commander used to manage the wages fund in the unit under his control. You can imagine the level of corruption in military units, if the commanders are entrusted with the right to distribute the housing stock among subordinates.

It turns out that the reform is overdue, but it is carried out without any basis. The call is shrinking, contracts are in no hurry to sign, a really functioning social mechanism is not built. But in our country they love to wave a sword, and then try again to glue the chopped.

Therefore, before reporting on dizziness from successes regarding the transition of the army to a professional basis, it is necessary to evaluate all the pros and cons, on the basis of which to come to a balanced position.

We are in Yandex Zen
Why Russian military reforms do not work. A look from the USA
Summon-2010: Autumn Aggravation
36 comments
Information
Dear reader, to leave comments on the publication, you must to register.