Wheel tank "Boomerang": what it can be

16 May 2015
86
The demonstration at the Parade of Victory of the newest Russian wheeled combat vehicle MIC-7829 of the average unified platform "Boomerang" caused a lot of positive feedback. Indeed, the Russian military industry has created a machine that will be at the level of the best world standards. As expected, a whole family of various combat and auxiliary equipment will appear at its base, including, probably, a wheeled tank. 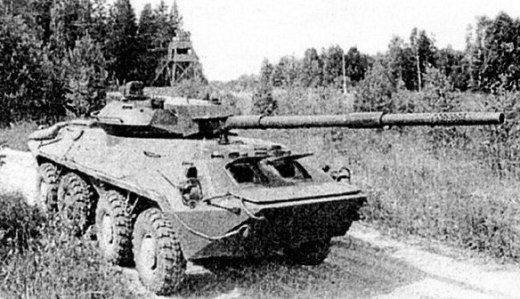 The first national attempt to create a wheeled combat vehicle with an anti-tank gun is considered to be work on the 2C14 "Sting-S", they turned around in the middle of the 70-s. As a base, the BTR-70, which was then produced in Arzamas, was chosen.

The car was armed with an 85 mm 2A62 cannon with an ammunition load of 40 armor-piercing rounds. Two engines with a total capacity of 240 hp dispersed a 12,5-ton fighter tanks"up to 80 km / h. The car" walked "well on water, according to some reports - up to 10 km / h. Reservation protected from rifle bullets weapons and splinters. The crew was 4 man.

Despite successful trials, “Sting-S” was never put into service, which, according to some experts, was a mistake. This combat vehicle could be useful to the parts of the Marine Corps, which until the beginning of the 90-s exploited an outdated tank PT-76. In addition, the M1 and Leopard-2 tanks were only in the Federal Republic of Germany, and potential adversaries had armored vehicles (such as M-60 tanks and the 59 Type) in other directions, which the Sting could successfully fight.

In addition, after some modernization (replacing engines with a diesel-type BTR-80), the 2-14 could be successful in international arms markets. In particular, countries such as Libya and Iraq, which paid for Soviet supplies with hard currency, were in dire need of such armored vehicles. For example, the same Saddam Iraq purchased about three hundred Brazilian Engesa EE-9 Cascavel armored vehicles armed with an 90-mm cannon. Libya has acquired about 400 such machines.

In 90-s in Russia, work was carried out on an armored personnel carrier of a new generation, the BTR-90. This machine was supposed to be the basis for a whole family of different equipment. It was assumed that the wheeled tank 2C28 "Sprut-K" would be created.

According to some reports, this combat vehicle was supposed to receive an 125-mm cannon as the main weapon, similar to the 2-XNNXX tracked "Spruce". Yes, and the tower itself is almost consistent with the one that stands on 25C2.

According to military experts, if the car were brought to the series, then at present the Russian army would have a best-in-class combat vehicle. However, due to 90's chronic lack of money, the base itself, BTR-90, was built up over 20 years. And, despite the official adoption for service, not a single BTR-90 did not get into the troops. And then it was generally decided to make a new armored personnel carrier. 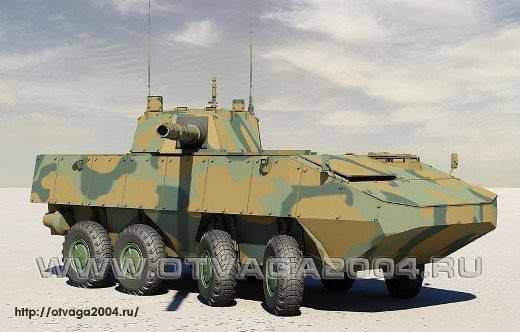 When the exterior of the military-industrial complex-7829 was not yet declassified, a lot of supposed images of this car appeared on the web. For example, there are options for what a boomerang wheeled tank could look like. On it hoisted the combat module, which was developed for the "Sprut K".

In fact, according to military experts, most likely, the layout of the Boomerang cannon variant will be similar to the Armata tank: with a fully automated uninhabited turret with protected ammunition. It is possible that the wheeled tank will be unified with the main battle tank by the sighting system and means of active protection.

Various assumptions about the weapon are made, but, most likely, the discussion will be about the 2А75 variant, which is used on the Sprut-SD on the 2С25. Thanks to him, the "tank" "Boomerang" in firepower will be equal to the modern T-90A. That, in principle, will be sufficient for the performance of all combat missions by medium combined-arms brigades.