Unusual tanks of Russia and the USSR. "The Tsar Tank" of Captain N.N. Lebedenko 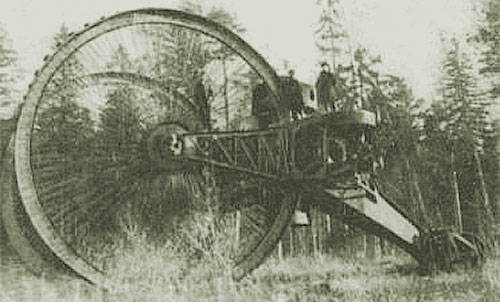 As we know, after World War I, the First World War passed into the phase of positional warfare, better known as the “trench warfare”.


It was almost impossible to penetrate the enemy’s deeply echeloned enemy defenses using traditional methods massed by artillery preparation followed by the breakthrough of the defense line by infantry and cavalry, which inevitably resulted in huge casualties, with little success. Even after a long artillery preparation, it was not possible to crush all enemy well-fortified and camouflaged gun emplacements. Required new weapon and new ways to use it to solve this problem. This new weapon, according to the engineers of the time, was supposed to be a self-propelled vehicle, with powerful armament, well armored and possessing high maneuverability. The army needed a positional tank capable of breaking defenses with its own power, sowing panic in the ranks of the enemy. One of these "armored monsters" was supposed to be the wheel tank N. Lebedenko, known as the "Mastodon", "Bat", "Tsar - tank".

The combat vehicle of this engineer can rightfully be called the first wheeled in the world a tank. The project of this machine N. Lebedenko hatched since the beginning of the war. During his service in the Caucasus, he had to see how easily the high-wheeled carts of local peasants overcome bumps, probably so the idea of ​​creating a car with giant wheels got into his head. To implement his ambitious and at the same time adventurous project, he attracted the engineers B. Stechkin and later A. Mikulin to his side, convincing him that several such machines could easily break through the German defenses on the whole front within one night and thereby Russia will put an end to this war. 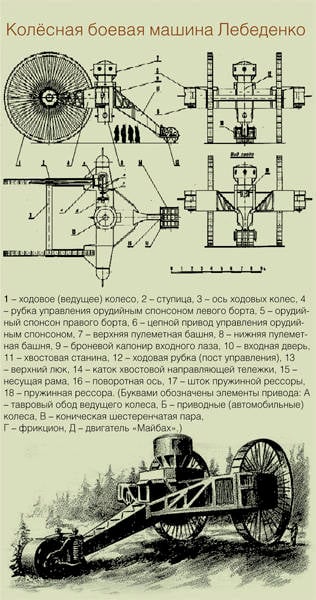 The car looked like a huge gun carriage with huge nine-meter wheels. The turn was made using the rear guide carriage on which the roller was located with a diameter of 1,5 meter. When viewed from the front, the tank hull had the shape of a cross, according to one data, 37-mm guns were placed in the side sponsons, 76.2-mm guns on the other, and machine gun turrets in the bottom and top, which were supposed to be mounted on the Maxim 4 . Reservation of the hull according to the initial design was supposed to be 5-mm, towers - 7-mm. The estimated speed is up to 8 km per hour (some sources call the estimated speed 17 km per hour). Weight - 4 tons. The car had to be driven by two “Maybach” motors with horsepower 40 at 240 rpm. each shot from a padded German Zeppelin. Length - 2500 mm. Width - 17800 mm. Height - 12000 mm. It seemed that, having such technical characteristics, the machine would effortlessly overcome a vertical obstacle or a trench.

Having prepared the scale model of the future car in advance and enlisting the support of influential persons, N. Lebedenko achieved the audience of Nicholas II, the model made an indelible impression on the king, easily overcoming obstacles in the form of books laid out on the floor. The sovereign left the “toy” to himself, and in return ordered to open an account to finance the project. N. Lebedenko immediately began to manufacture the machine. The running wheels were assembled in the Dmitrov area, and parts of the corps were in the arena of the Khamovnichesky barracks in the mode of high secrecy. The assembly of the tank was started in July 1915 of the year in 60 km from Moscow, near the station Orudevo, and already in August in the presence of the highest persons it was put to the test. A. Mikulin, taking the driver's seat, started the engines and set the car in motion. While the tank was going on solid ground, everything was fine, but, once on soft soil, the rear guide car hit the ditch, and the car got up. The power of two 240-strong engines was not enough to pull the cart. The actual weight of the tank exceeded the calculated one and amounted to 60 tons, the specific pressure on the ground turned out to be excessively high, as the supplied sheet metal intended for the hull was thicker than the project had assumed. Thus, N. Lebedenko’s tank was not tested, it was left under the protection of soldiers' guards, and A. Mikulin and B. Stechkin, with the assistance of Ot and Weser, tried to create a more powerful engine to continue working on the project, but in the released time he was not, and soon the commission overseeing the progress of work, stopped allocating funds to support the project. He was declared unpromising. The giant wheeled tank was abandoned in the forest and stood there until 1923, after which it was dismantled for scrap.

The fate of the project was typical for the time when there were no established rules in tank building. However, it was only with the advent of tracked vehicles and with the classic layout that the idea of ​​a wheeled tank was a dead end.

Ctrl Enter
Noticed oshЫbku Highlight text and press. Ctrl + Enter
We are
Tanks disguised as carsUnusual tanks of Russia and the USSR. BT IS 1936 year
17 comments
Information
Dear reader, to leave comments on the publication, you must to register.