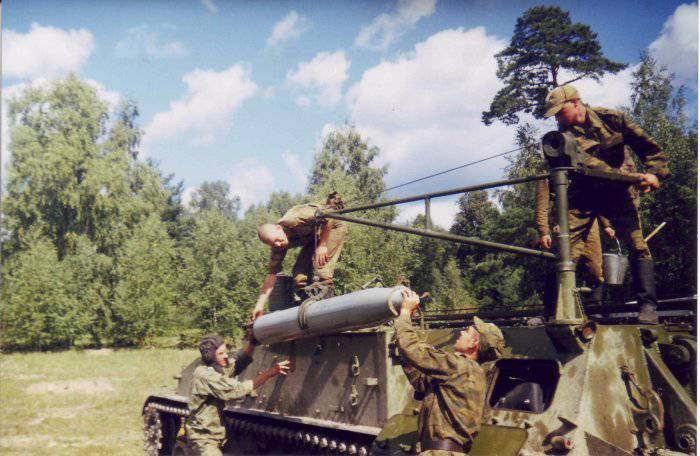 The Russian Ministry of Defense began to create a system for controlling artillery at a distance.

With this system, the commanders of artillery and rocket troops will be able to simultaneously control several dozen systems and guns. The armies of Western countries have already used such systems for several years, while in Russia they are only beginning to be tested.

If you take a closer look, it all looks impressive: heavy guns simultaneously turn around, take aim and hit the target, and the military only see to it that the whole process goes smoothly.

The technological process of the automated guidance and fire control system (ASUNO) is extremely simple: commands are sent from the control complex via high-frequency communications to special modules that are embedded in self-propelled units. These modules calculate the trajectory of the projectiles and, through a special drive system, induce systems and tools, and then fire a shot at the target.

The disadvantage of the Russian system is that it still lacks a modern management complex, which they are currently trying to bring to mind in the Taman Brigade. It is necessary for the distribution of goals and objectives between the instruments of one division.

As military engineers say: “It happened that after a command was received from the control panel, the gun barrels could be directed in various directions. If this happens in combat conditions, the firing mission will fail, and the guns can even fire on their own. That is why we are now carefully adjusting this complex. ”

According to calculations, the end of testing of new ASUNO complexes is expected in 2012. It is also planned to fully integrate these complexes into the Unified Tactical Level Management System (ESU TZ), with the help of which the entire Russian army will be managed in the near future.

The automatic control system will make it possible to increase the accuracy of artillery on 20 – 30%, as well as to optimize the time to prepare for shooting in 6-10. According to the editor-in-chief of the specialized Arsenal magazine, Viktor Murakhovsky, this whole set of measures will lead to a significant increase in the effectiveness of artillery.

Mr. Murakhovsky also noted: “Outdated control systems, such as Kapustnik, could only calculate ballistics. These calculations were transmitted by voice to the commanders of the calculations and entered manually into the weapon. Now this whole process will be automated and occur in real time.

The Russian Ministry of Defense, without waiting for the results of the test of the control complex, began to purchase artillery systems that are equipped with ASUNO. Presumably, as soon as all the tests are completed, the artillery crews will be equipped with command vehicles and the formation of the system will be completed.

Significantly, ASUNO modules are also suitable for obsolete tools on which they can be installed as part of a planned update. Such control modules can be installed on self-propelled howitzers "Msta-S" and "Akatsiyu" (152 mm), as well as on the 122-mm "Carnation".

The Ministry of Defense planned to carry out a complete renewal of the fleet of artillery and missile units with ASUNO weapons before the 2015 year.
Ctrl Enter
Noticed oshЫbku Highlight text and press. Ctrl + Enter
We are
Artillery of the Korean People’s Army. Part of 2. Self-propelled gunsSelf-propelled artillery mounts
15 comments
Information
Dear reader, to leave comments on the publication, you must to register.