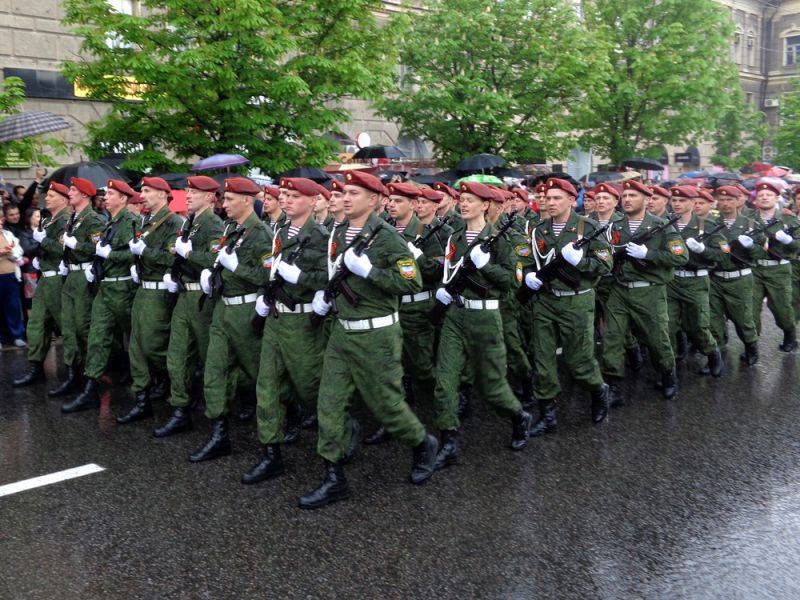 In the morning of May 9 in Donetsk it was raining. But can the usual rain of people, many of whom have experienced lead rains, scare them? 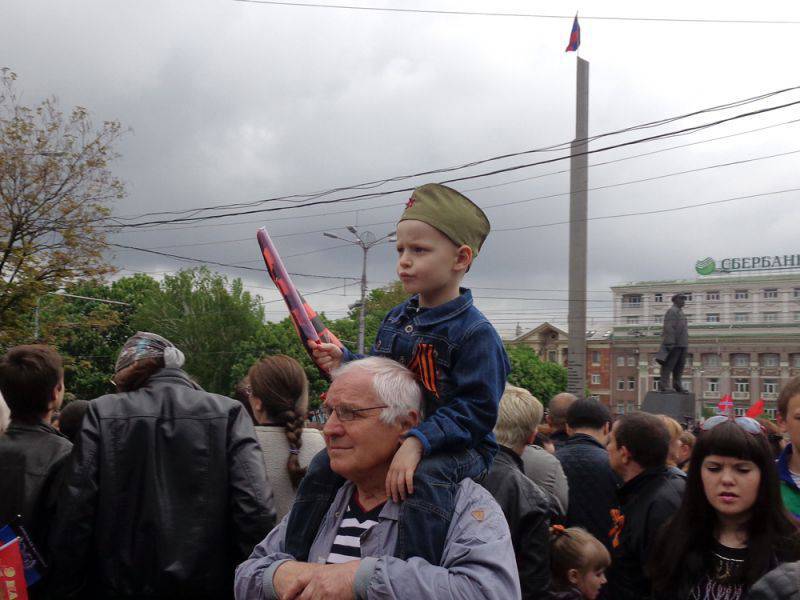 As locals say, the current festivities are the most ambitious in a few years. Even in peacetime, there were not as many people on the streets and squares as this time. 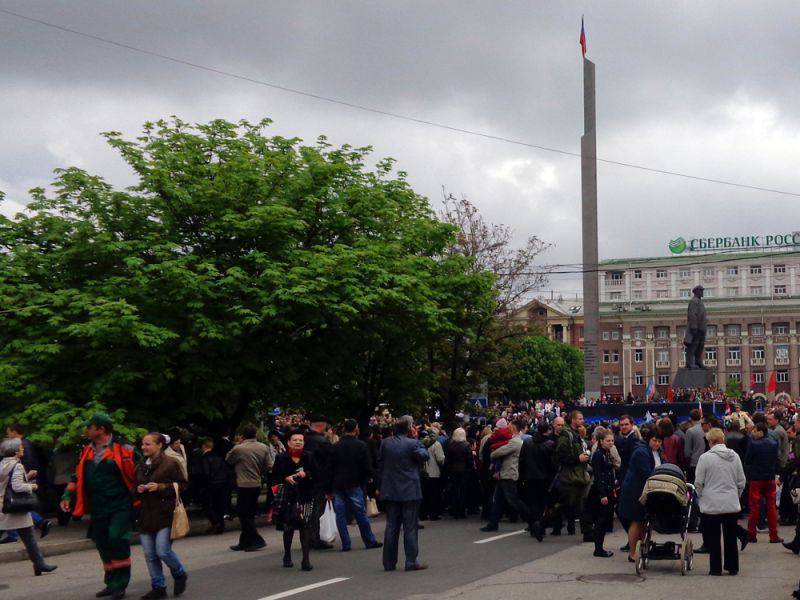 And this is despite the threats of provocations. I was extremely advised not to go to New Russia these days - they said that anything is possible. One can only imagine what attempts at intimidation have experienced on themselves the inhabitants of Donbass. But the people came out. Moms and dads with small children came out. Gone with disabilities. Old men come out. Anyone who can walk and even those who cannot. 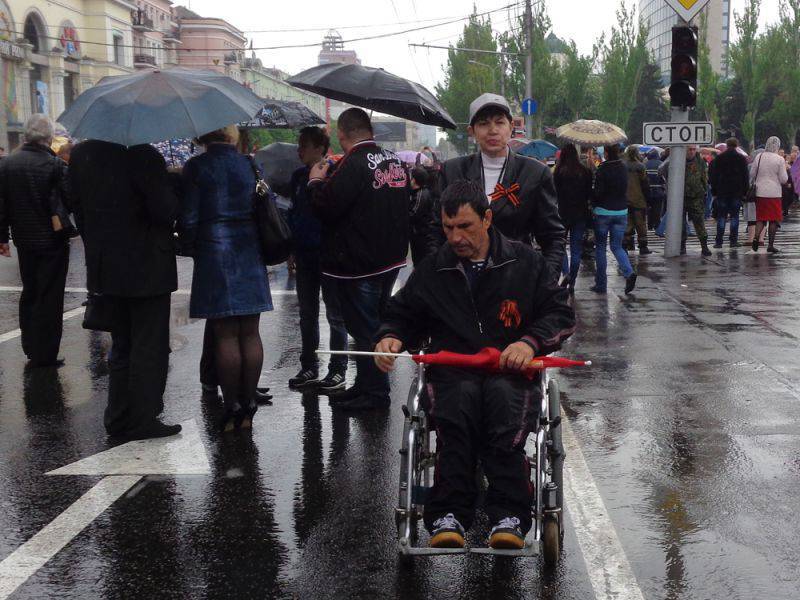 When armored vehicles drove through the streets of Donetsk, many of the participants gave flowers to soldiers who were sitting on the armor. Bouquets flew to the pavement. The joy of people cannot be described in any words - the city exulted. 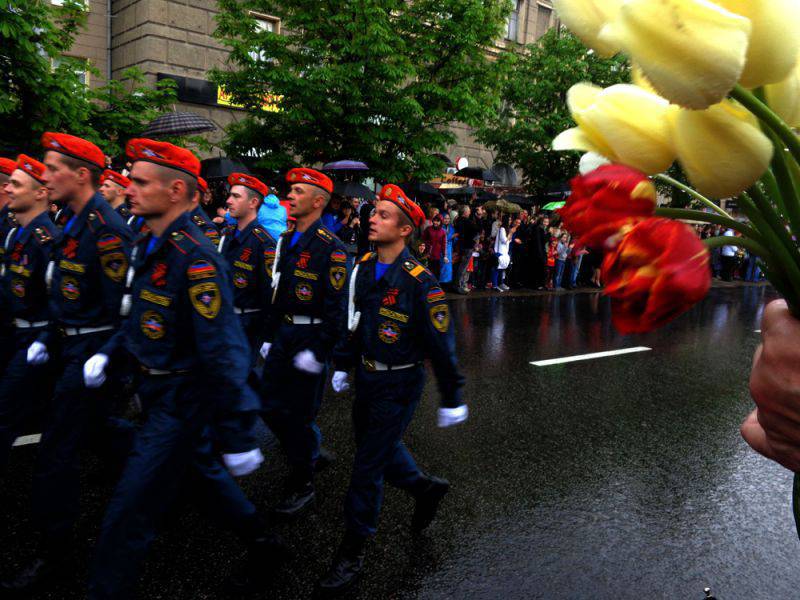 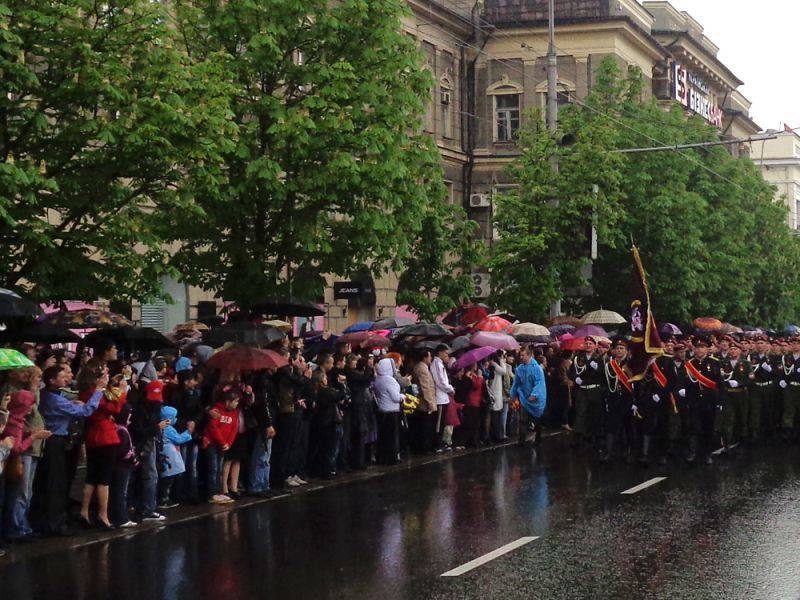 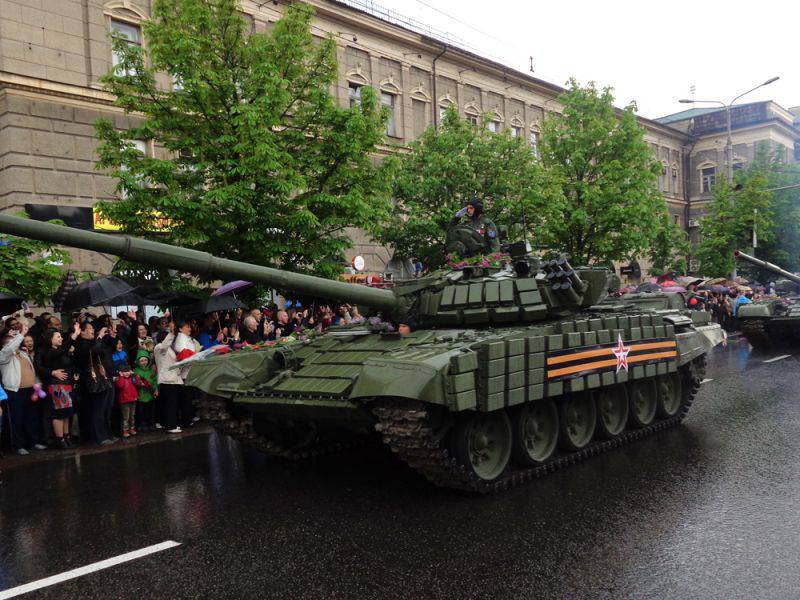 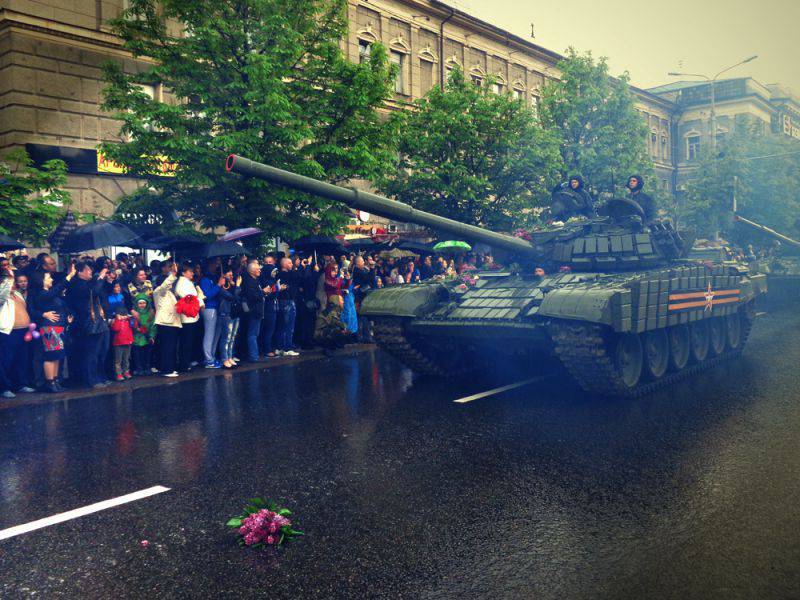 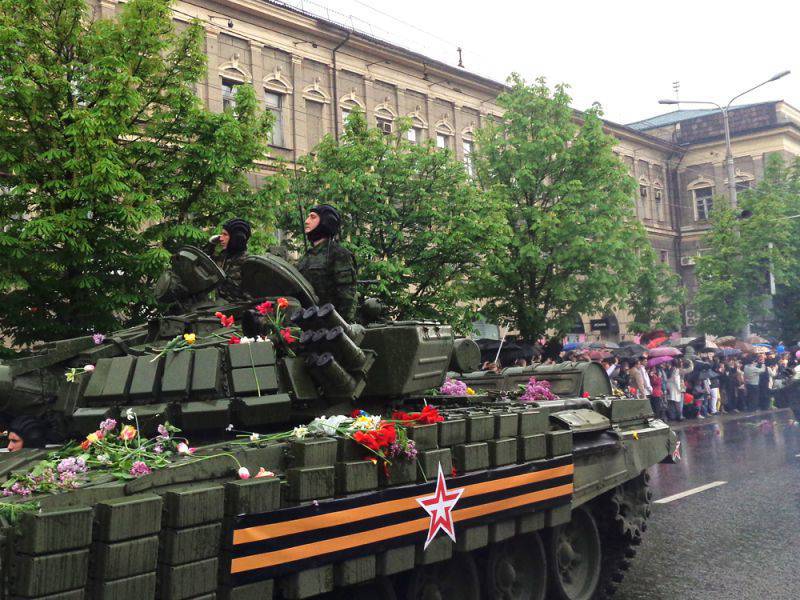 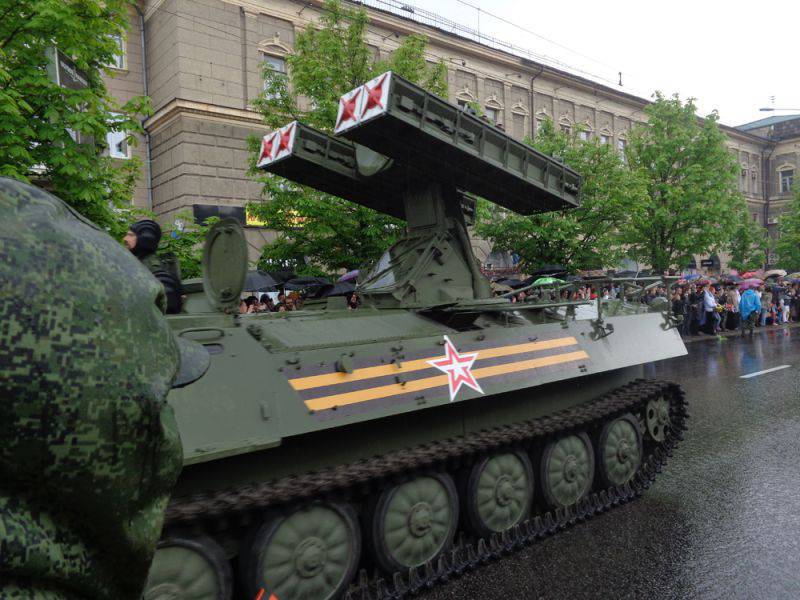 Here, in Donetsk, there is no fierce struggle for the opportunity to set up posters with the Supreme Commander-in-Chief, under whose leadership the Soviet people won one of the greatest victories in the world. It is in Moscow that there are forces that impede historical justice. But in the capital of New Russia, the Leader greets us with a colorful poster. 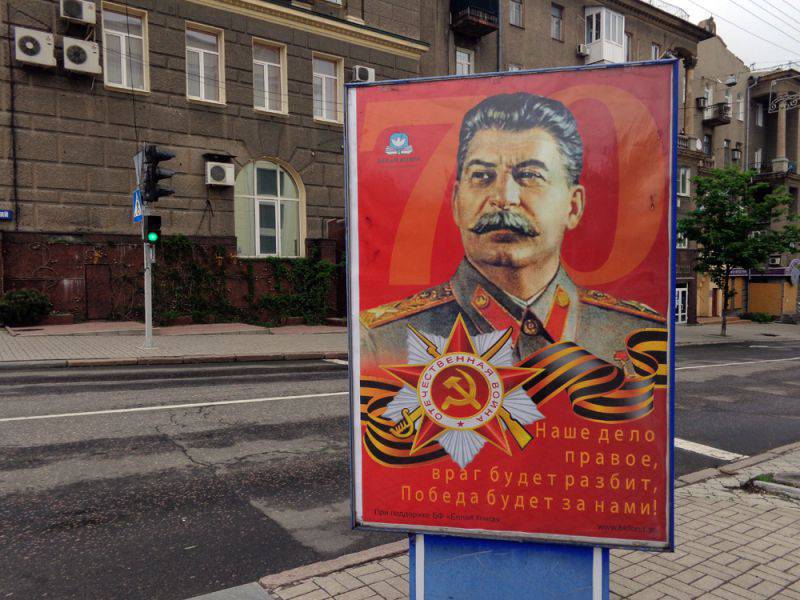 Preparation for the holiday was carried out thoroughly. The whole city is in bright banners. 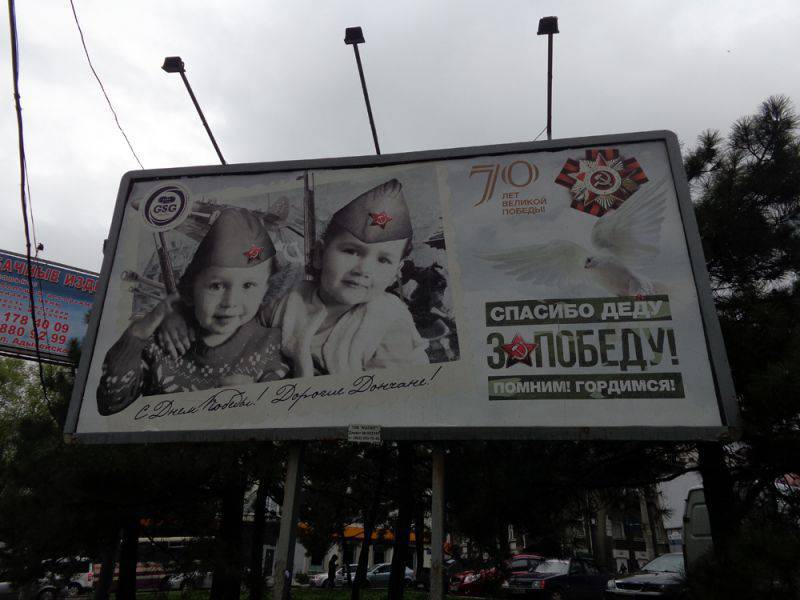 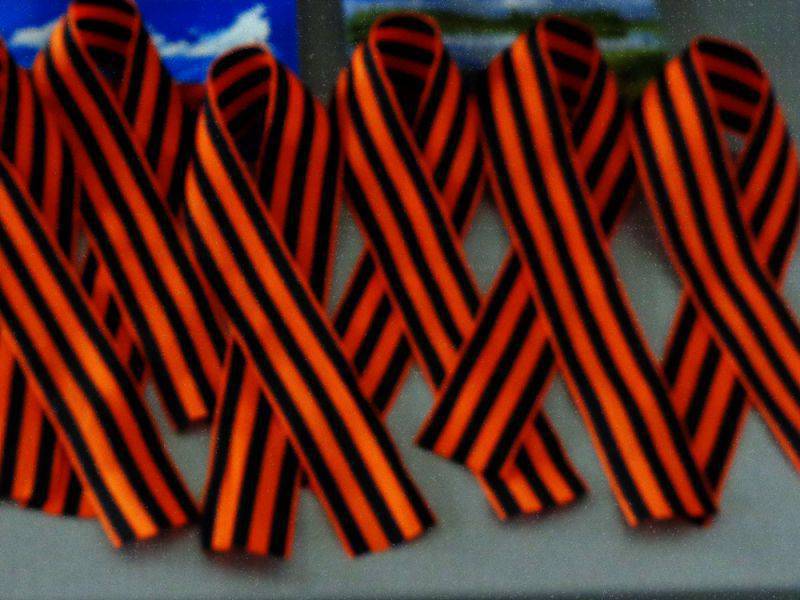 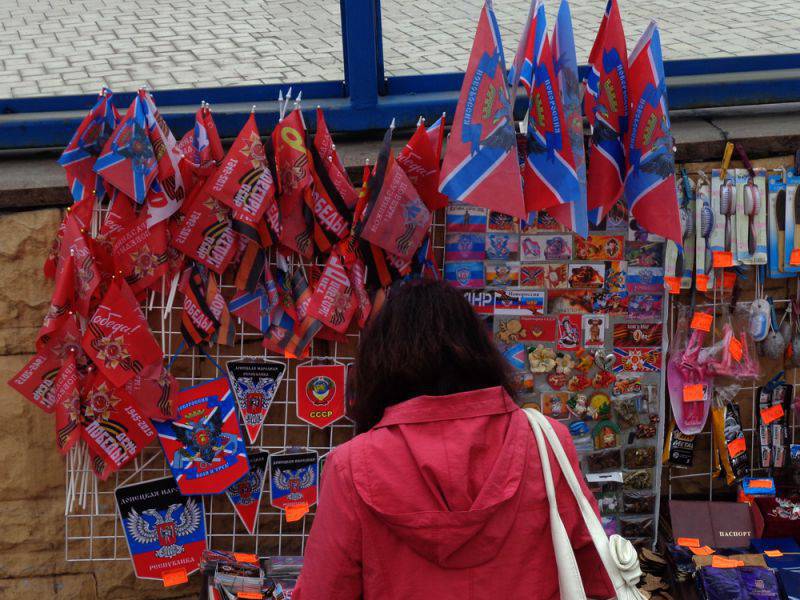 Motorists carefully decorated in the appropriate spirit of their "iron horses". 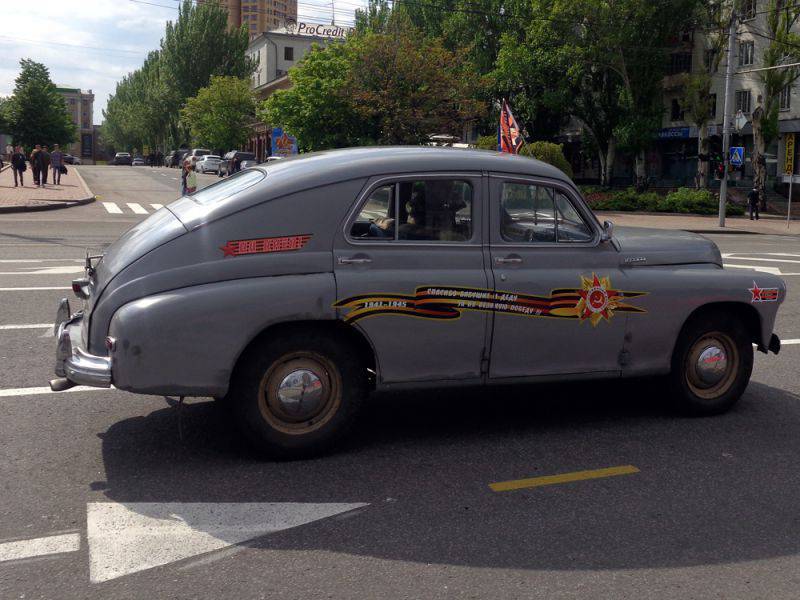 Here and there - concerts. Creative teams, which include, among others, veterans, sing military songs. Children read poems. 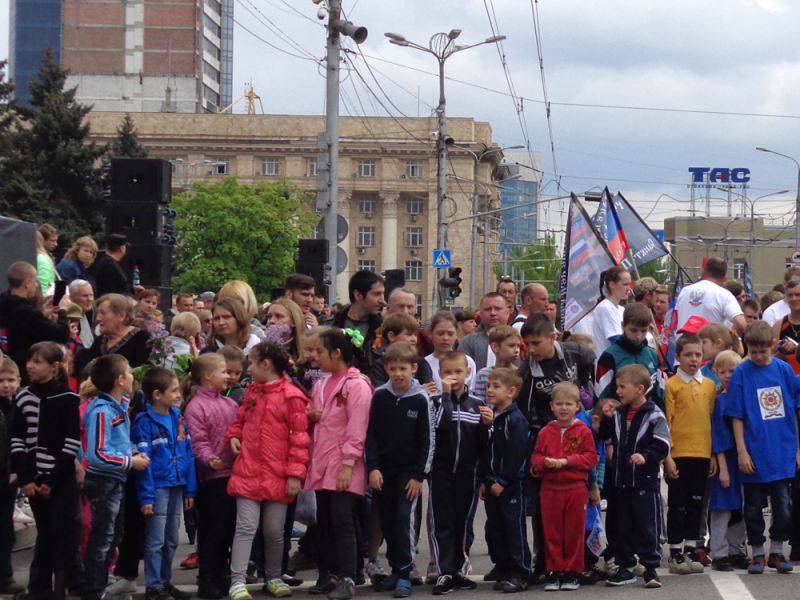 One of these concerts on the eve of the holiday was held near the youth palace "Youth", severely affected by the tombstone. 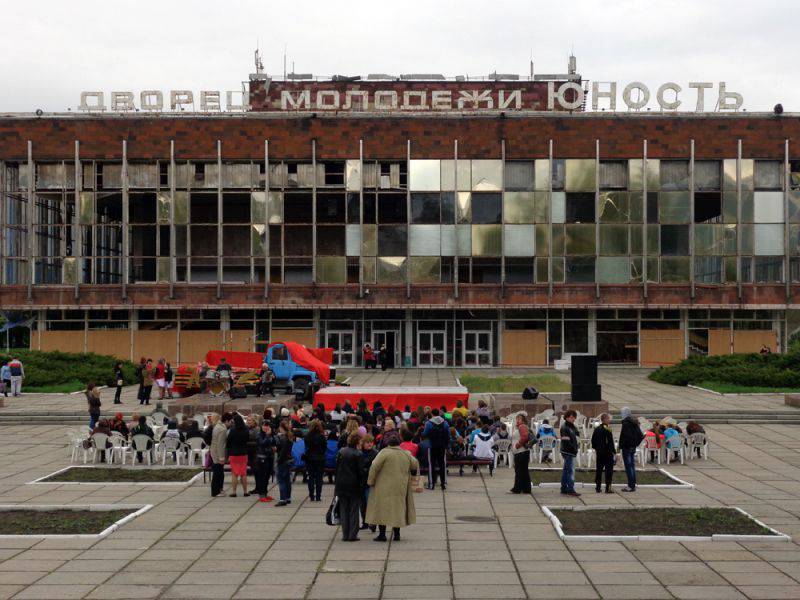 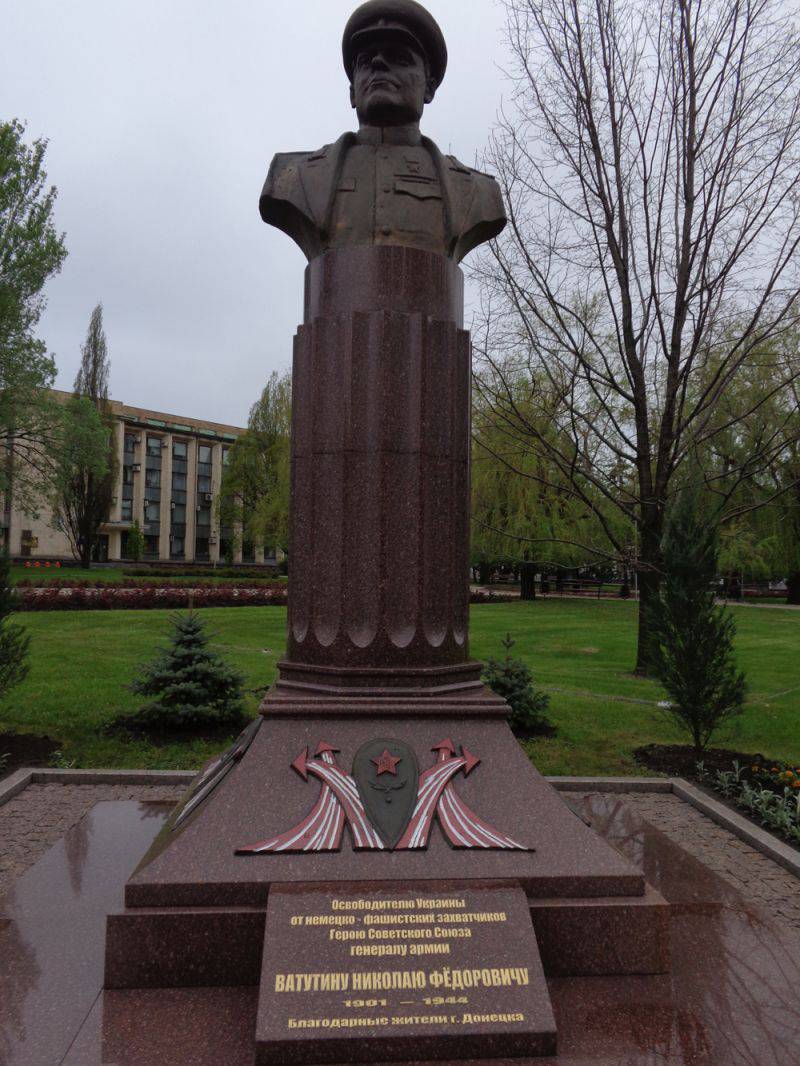 Friends of Novorossia, in particular, the Syrian community, came to honor the memory of those who fell in the Great Patriotic War. 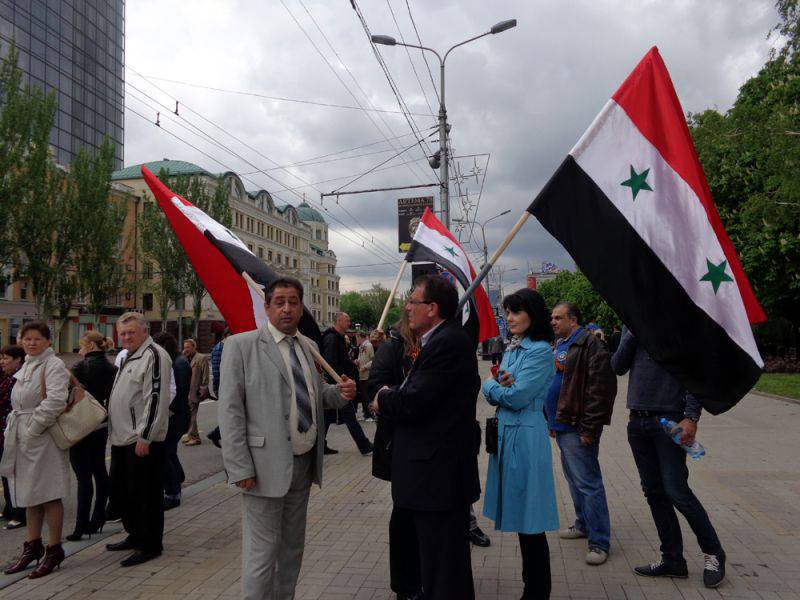 Memorable events were also held in the Leninsky Komsomol Park, near the magnificent memorial "To your liberators, Donbass". To the burning Eternal Flame, to the plates with the names of the fallen laid many flowers. 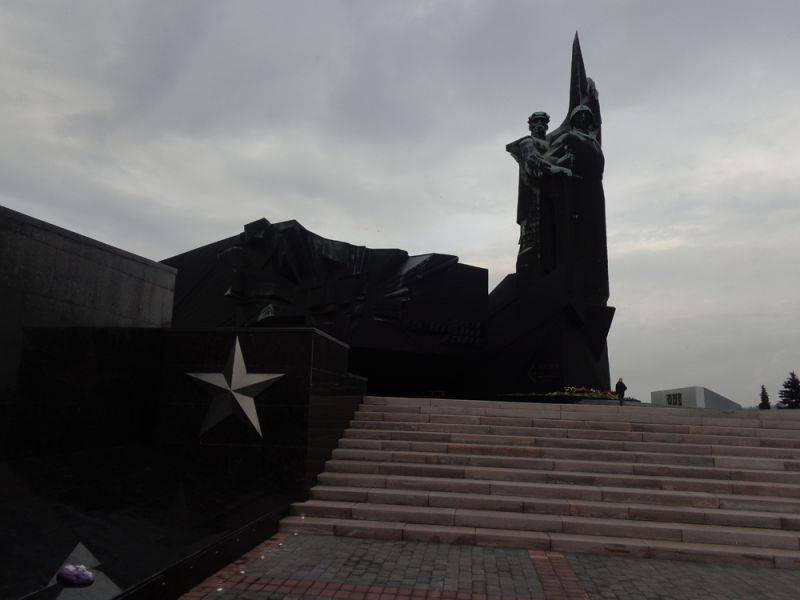 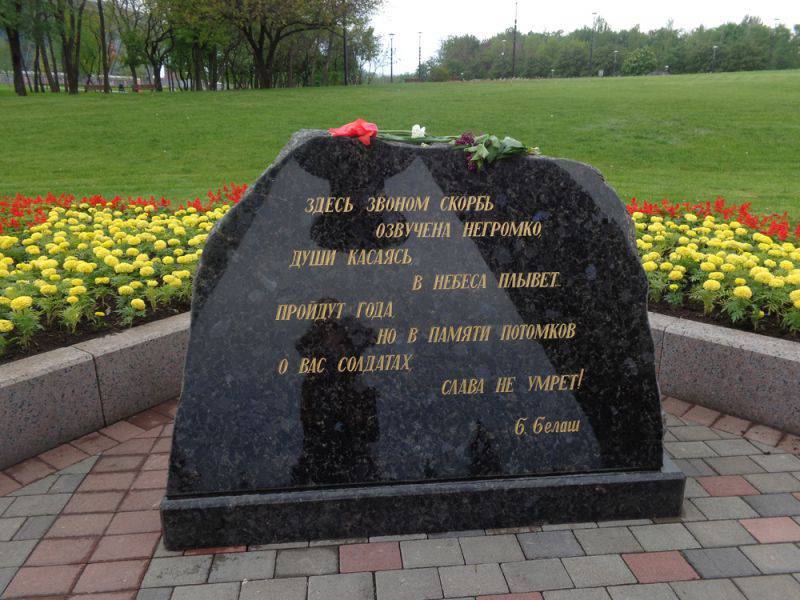 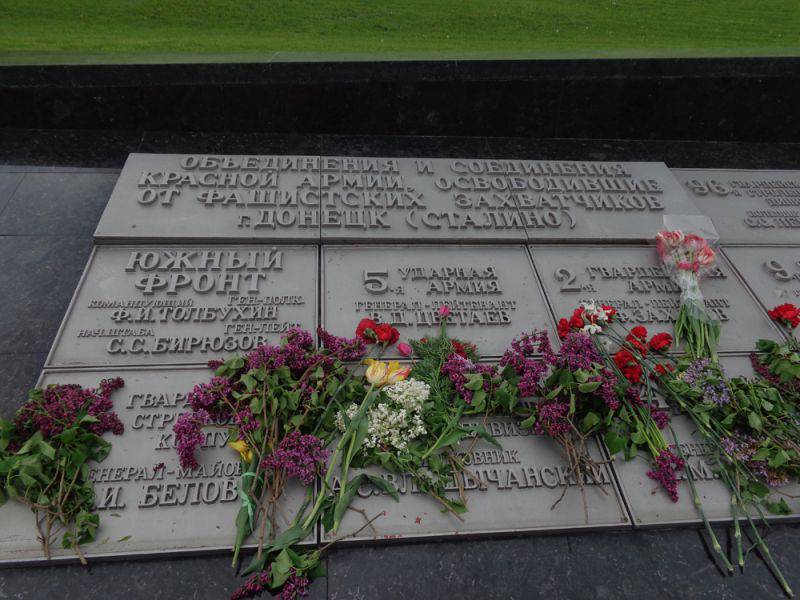 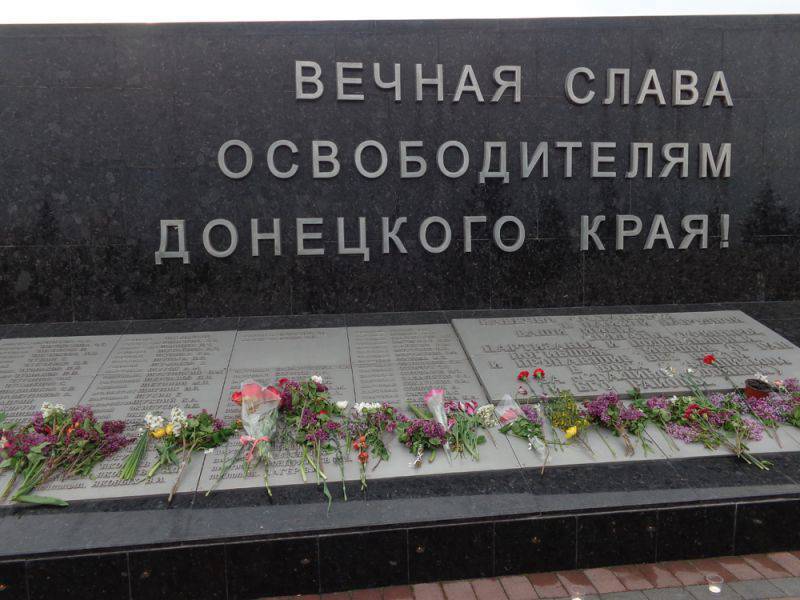 Children were happily photographed against the background of armored vehicles, standing at a huge monument. 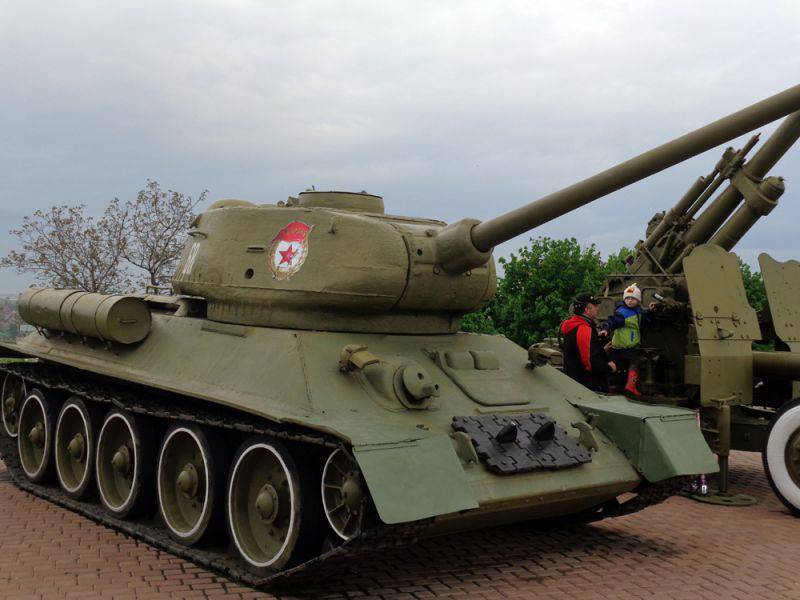 Volunteers put burning candles so that the inscription was: "70 years." 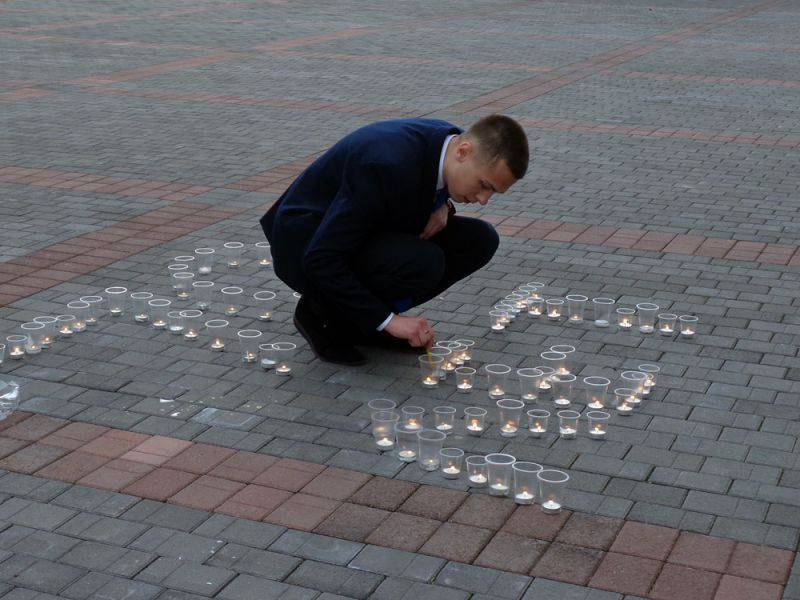 Ukrohunta and its external patrons hurried to declare a national holiday in the Donbass ... "outside the law." Claimed that the parade is a violation of the Minsk agreements (and what about the constant shelling of the outskirts of Donetsk by ukrokrateley?)

But with their massive appearance on the streets of their native city, the residents of Donetsk showed that, in general, they do not care about the opinion of the Kiev junta illegally seizing power. New Russia has its own way. The path on which no one will forget the fallen heroes.