Reflections after the Parade

12 May 2015
233
Such is the thing: everyone who has trampled down the pavement of Red Square at a parade at least once, treats this event with a special feeling. I'm not an exception. I watch each. In the company of their own kind or alone. And at the same time I have different feelings every year. 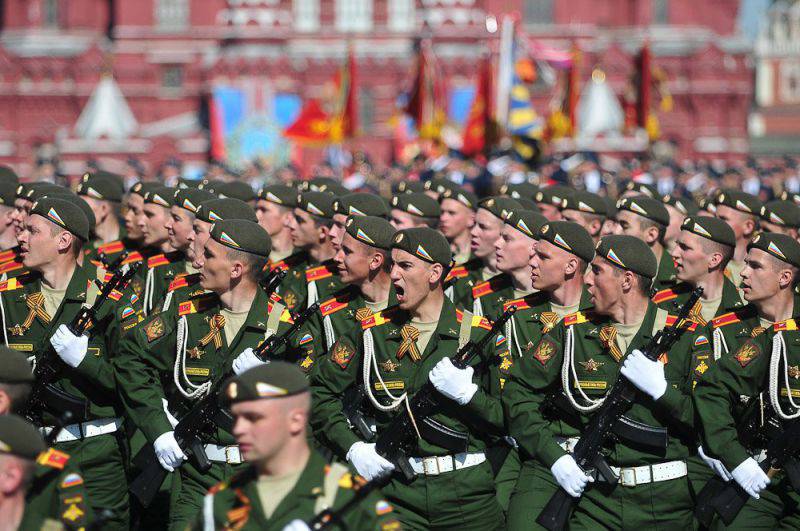 Quite recently, everyone spat and growled. From misery. From the fact that the parade commanded by representatives of the family of non-ruminant artiodactyls in civilian suits. From the way they took the parade and reported to the Supreme. From who and how went on these parades. Intendants, financiers and other managers.

No, representatives of these services are necessary in the army. And even at the parade they have the right to attend. The question is in quantity.

Saddened by the lack of technology, replaced by receptions with weapons and other frills.

Glory to Russia, that all this poverty in the past. I hope forever.

Last year’s parade was already a parade. And made me think, what will happen next year?

And here it is over. “Ffuuhhh” - we breathed.

It was really a Victory Parade. Demonstrating, as in the good old days, the power and might of our Armed Forces. It was a masterpiece.

Nervous, yes. For "weave" and "thirty". For "Almaty". And for their crews. It is hard, to lead that a completely new tank, that one that is at least 70 years old. But - gone. Now, I hope, those who squealed for joy at the “Armata” stalled at the rehearsal will calm down. That's why she is a rehearsal. And the nerves of the crew ... well, anything can happen.

I will not regret a single ruble spent on this Parade. Although, I am sure, now the mourners will show up sobbing that "it would be better to spend this money on ...". I do not regret. And I do not advise you.

The deepest reflections caused an unusual beginning of the Parade. If you move your brains deeply, then at the Parade of such scale and dedicated to such a date should have been present those who, in fact, won. That is, the USSR and the allies. Right?

The USSR is no more. It means that the presence of representatives of the Armed Forces of Armenia, Azerbaijan, Belarus, Kazakhstan, Kyrgyzstan, Tajikistan together with Russia is what is needed. This is us.

How should there be those who fought against fascism on the side of the USSR. That is, the country of the anti-Hitler coalition. Is it logical

Serbs. No questions. Sole Representatives historical wretchedness of Europe. Beauties. Even in ancient times, Emperor Alexander III once proclaimed this toast: “I drink for the health of the king of Serbia and Montenegro. Russia has no other friends and allies in Europe! ” The scandal then was serious, but now, historically, how it turned out ...
Respect and respect for the little people who fought the whole war against the fascists and who were not afraid of anyone today. By law in the system, by law.

Mongols. And, by the way, they were great! Allies too. Though not fought with the Germans. But Mongolia’s contribution to our victory is enormous. This should be discussed later. But it’s just great that the Mongolian soldiers were at this Parade.

But then ... India and China. No, historically we seemed to be on the same side. Well, in a sense, the enemies were common. Japanese. But if you think well - this is politics.

What the Indians looked like and went more than cool - I will not argue. In general, such a highlight came out and passed in front of the stands. Yes, and the Chinese fighters also looked. But deeper ...

We have already said that the Parade, as a litmus test, will show who and where. Apparently, I had to add to this cocktail policy. There is no USSR and allies - sadly, but here you have Russia and allies ... Like, you will receive and sign.

And the fact that the allies from the East - who is to blame?

So, the parade took place. It has already become a story, which will include the most luxurious and wonderful as possible (well, for me, for example, parade No. 117 will forever be the best, after all). For now, at least.

The world is changing a little every day. Little, but changing. I think that this day, the day of such a great celebration of the greatest, probably, in our history, Day, will still bring its results.

Perhaps those about which we still do not guess.

But the fact that they will be - for some reason no doubt.