7 May 2015
26
Back in the fall of 1945, the United States Department of Defense developed requirements for a promising strategic bomber. The latest Convair B-36 Peacemaker aircraft have yet been arranged by the military, but the expected rapid development aviation allowed to operate such equipment only for the next few years. By the mid-fifties, it was required to completely renew the fleet of distant bombers. To this end, a program for developing similar projects was soon launched and a competition announced.


The winner of the competition in the end was the company Boeing with the project of a bomber, later named B-52. In addition to Boeing, several other aircraft-building companies participated in the competition, offering the most daring designs. Among the participants of the program was the company Douglas. By 1950, when the final stage of the competition began, this company developed several versions of a preliminary project under the general name Model 1211 or simply “1211”.

According to some reports, during the 1211 project, Douglas specialists reviewed several dozen variants of the overall architecture and layout of the prospective aircraft. At the same time, only some proposals were worked out at the level of the preliminary project. All of them, by the standards of the company, received additional letters in the designation. Thus, at different times, engineers were engaged in projects "1211-A", "1211-B", etc. At the time of the submission of the draft, the project with the letter “J” was military relevant. It was he who stayed in stories American aviation as not very successful competitor of the future B-52. 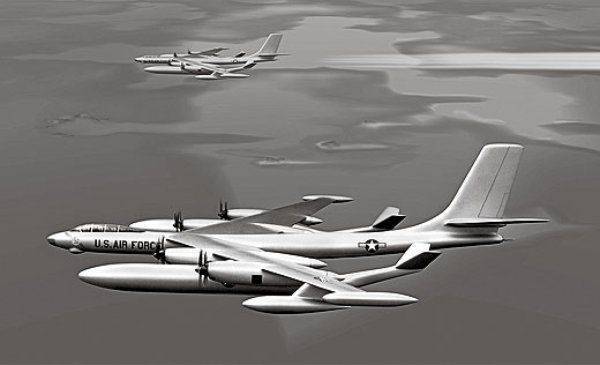 Gradually developing the initial ideas, the Douglas specialists gathered in the Model 1211-J project a number of the most daring and unusual technical solutions. In order to maximize the performance they went to a number of original steps of layout and other character. At the same time, however, in the project "1211-J" were viewed some of the trends characteristic of American developments in the field of long-range bombers.

Bomber Douglas Model 1211-J should have a sufficiently large size. The large elongation fuselage had a length of the order of 49 m, the swept-wing span reached 70 m. The proposed swept wing could provide high flight data. The plane, equipped with four turboprop engines, could reach speeds of up to 830 km / h and fly to a range of almost 20400 km. The combat radius at the same time was 8050 km. Estimated ceiling machines - 16500 m.

During the development of the project, an unpleasant feature of the chosen scheme was found out. To achieve the required flight range, the aircraft had to carry about 77,3 tons of fuel. Despite all the efforts, the designers were not able to place all the fuel tanks needed for this inside the wing and fuselage. Inside the aircraft, it was possible to place no more than 55 tons of fuel, i.e. about 70% of the required amount. Because of this, four additional tanks for 22,6 tons of kerosene were forcedly introduced into the fuel system. Such tanks were to be suspended under the wing, between pairs of engines and under the consoles.

After that, the project developers again had problems. The wing spanning the 70 m, loaded with fuel in the internal and external tanks, was supposed to be seriously bent. Moreover, on the take-off wingtips could hurt the concrete strip with the corresponding sad consequences. For this reason, the external pair of fuel tanks was equipped with drop-down additional landing gear. They had to keep the tanks at the desired height above the surface of the runway and protect the aircraft from damage. 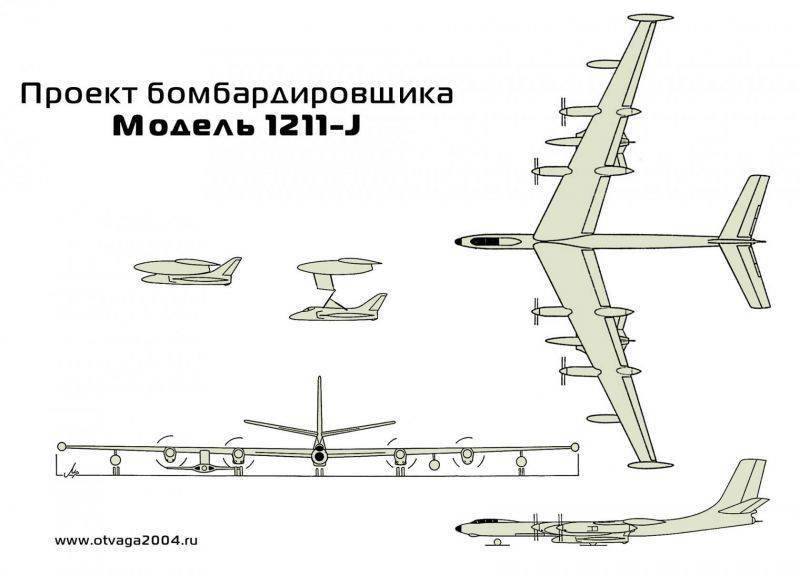 Scheme of the aircraft in the version of the bomber and carrier fighters. Figure Otvaga2014.ru

Apart from the large size and original structure of the fuel system, the Douglas Model 1211-J bomber was a typical representative of its class of technology. Inside was to accommodate the crew and the payload, as well as part of the fuel. On the wing were four engine nacelles for engines. In the tail of the fuselage was fixed swept plumage. According to calculations, the normal take-off mass of the prospective aircraft was 146 t.

On takeoff, it was planned to use its own chassis in combination with additional drop racks. Due to the emptying of tanks and reducing the load on the wing, you could only sit on your own chassis. The main landing gear were placed in the internal engine nacelles, another rack was in the forward fuselage.

As the power plant, it was planned to use Wright XT35 Typhoon turboprop engines with a power of 5500 hp. each. In addition, the possibility of using other turboprop engines was considered. It is known about the development of a variant of the project "1211" using turbojets. The engines were planned to be equipped with twin coaxial propellers with a diameter of 4,3 m.

To accommodate a nine-man crew, the Model 1211-J aircraft was to receive a two-story, sealed cabin in the forward fuselage. In the upper part of the cabin there were places for two pilots, a navigator and a flight engineer. In the lower, which had a nasal blister, the places of the scorer and the avionics engineer were envisaged. Manage the plane should have been six people. In addition, the cockpit had space for three pilots who could take control during long flights.

High speed of flight allowed to simplify defensive armament. To protect against enemy fighters approaching from behind, the plane had to use one 20 mm automatic cannon. The gun was equipped with a remote control system. In addition, the possibility of equipping a bomber with nodes for the suspension of air-to-air missiles was considered.

In the fuselage cargo compartment it was possible to place weapons with a total weight of up to 20 t. The newest non-nuclear bomb of the caliber 1211 thousand pounds (about 43 t) was supposed to be the heaviest ammunition for the Douglas Model 19,5-J. In addition, the aircraft was supposed to carry various nuclear weapons of suitable size and weight.

Overall, the 1211-J project looked interesting and promising. However, according to some characteristics, he lost to the developments of other project participants. In particular, the leadership project of the company Boeing has already been outlined. Among the shortcomings of the Douglas project were oversized dimensions that made it difficult to operate, as well as turboprop engines with insufficient performance. As the promising bomber development program was implemented, the military began to prefer machines with turbojet engines.

It should be noted that the specialists of the company "Douglas", seeing the new desires of the customer, attempted to update the project. So, in the version "1211-R" it was proposed to use a set of six engines: four turboprop and two turbojet. According to calculations, such a power plant did not give special advantages. Cruising speed was only 655 km / h, and the combat radius was reduced to 8000 km. Thus, the aircraft with a combined power plant in terms of flight data was almost no different from the base Model 1211-J.

The latest version of the Douglas Model 1211 project was a project with the letter “W”. Again trying to improve the performance and meet the requirements of the military, aircraft designers decided to equip the aircraft with four turboprop and four turbojet engines. There were no significant benefits anyway, which led to a halt in development.

Along with attempts to improve the characteristics of the aircraft by changing the composition of the power plant, Douglas specialists tried to solve other problems. The characteristic lack of jet fighters of that time was a small radius of action, because of which they could not defend long-range bombers on most of their route. In order to defend bomber formations, from the end of the forties the United States developed various so-called projects. parasitic fighters - light aircraft suspended under a bomber and delivered to the place of a possible battle. 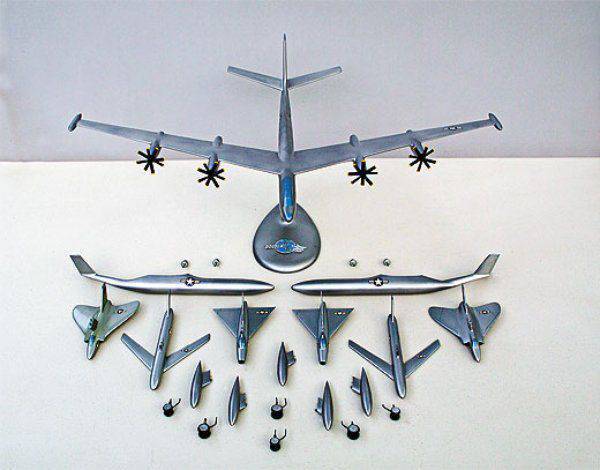 In the fighter carrier variant, the Model 1211 aircraft did not receive an internal pair of additional tanks. Instead, it was proposed to install nodes for mounting two fighter F4D Skyray. Such "flying aircraft carriers" could accompany the bomber compound and, if necessary, detach the fighters. The task of the latter was the fight against enemy fighters and the protection of their bombers.

The competition to develop a promising long-range bomber lasted several years. The number of contestants has steadily declined: the first unsuccessful projects were stopped already in the middle of 1946. Project Model 1211 was developed until the early fifties. All work on it was stopped shortly after the military chose a proposal from Boeing and supported the further development of this project. The result was the emergence of a strategic bomber B-52. The project of the company Douglas went to the archive.