May Day in the style of Airborne 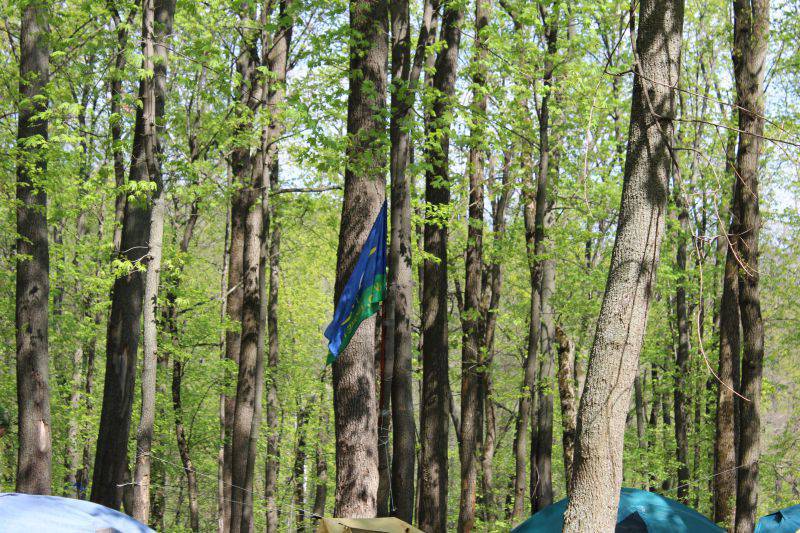 I will not reveal the huge secret that Voronezh in terms of respect for the airborne forces is not much inferior to Ryazan or Pskov. The birthplace of the first landing is, you know, obliging.

Marines are not just a lot. It so happened. And the range is amazing. Especially on 2 August.

But, oddly enough, it will not be about discharged bathing lovers in the fountains.

It will be about those who care who and what will be in our day after tomorrow.

For five years, under the auspices of the Voronezh Union of paratroopers, training and fees have been held for the younger generations. And so it happened that I got to the opening of such an event. And then he lingered until the end of the first day.

Everything is generally predictable. The same as in one of my articles I called “private initiative”. Camp in the forest, tents, boys and girls. And the group, let's say, enthusiasts in their field. Which instead of barbecue at the cottage or other pleasant pastime held these competitions.

Present 6 teams from the city and region. About 70 members. Last year there was more, but in connection with the celebration of the Victory Day some "plowed" in the field.

Everything was more than modest and simple. The shortest rally in honor of the opening, minutes on 10, passed into the briefing. And got down to business.

On this day, participants had to go the route on the map and the legend, to descend and ascend with the help of equipment. The route had to be passed covertly, at some points “snipers” with cameras kept watch. Contact with the lens was punished with a serious 10 minute penalty. 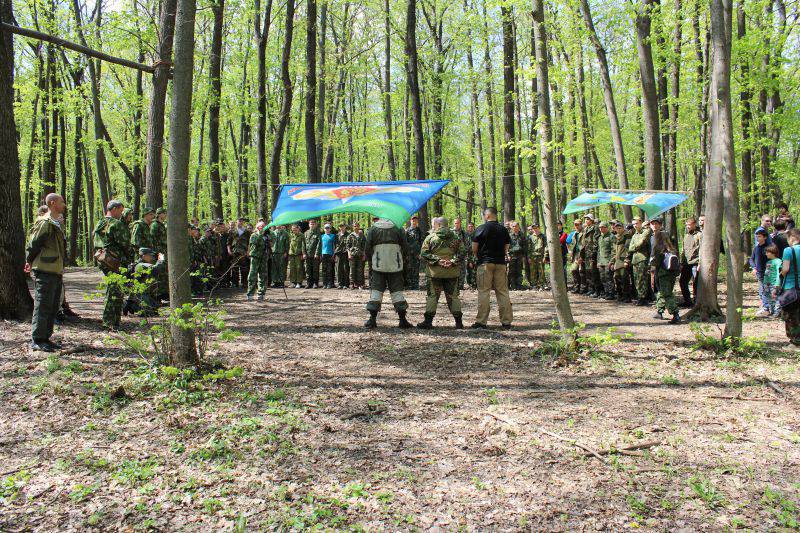 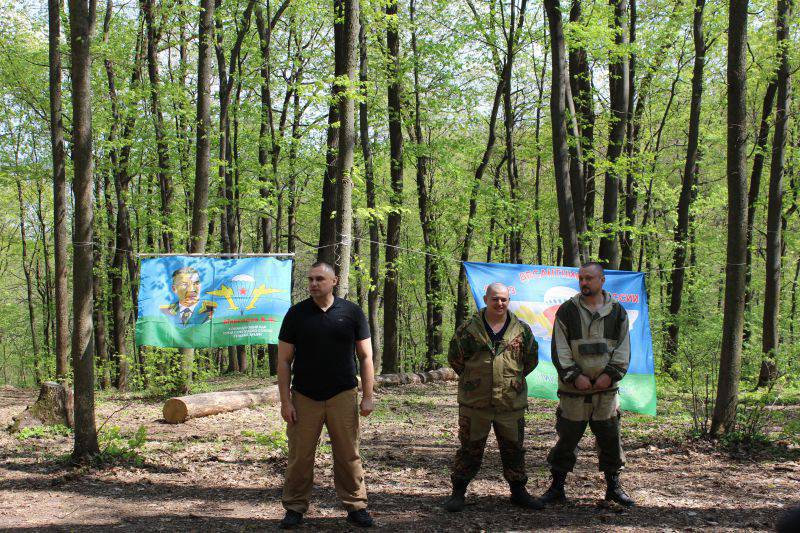 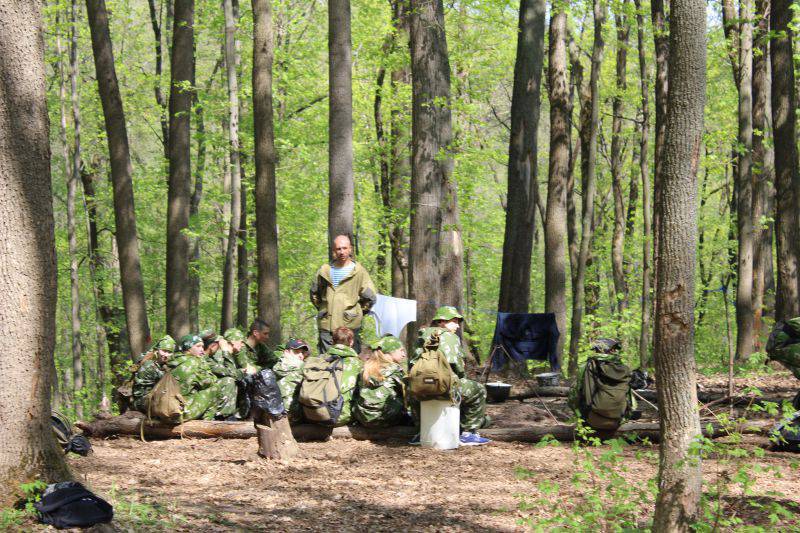 Last instruction from the tutor. At a distance, participants leave without teachers. 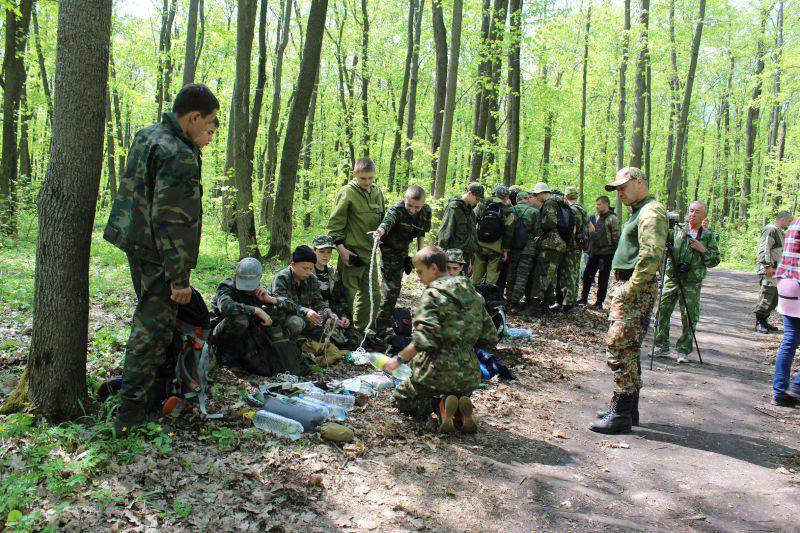 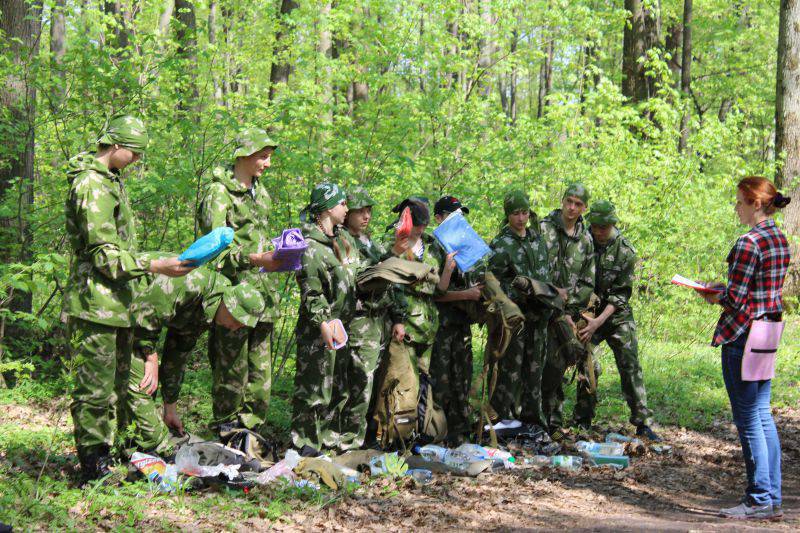 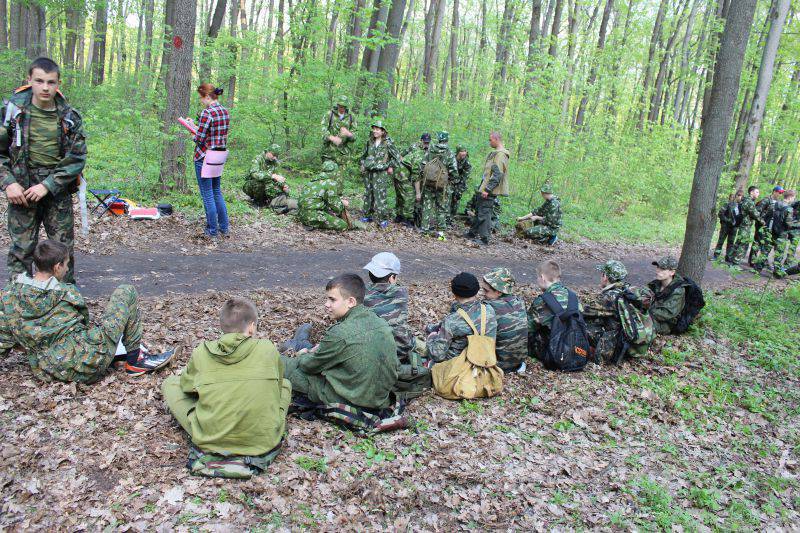 Three minutes before the start. 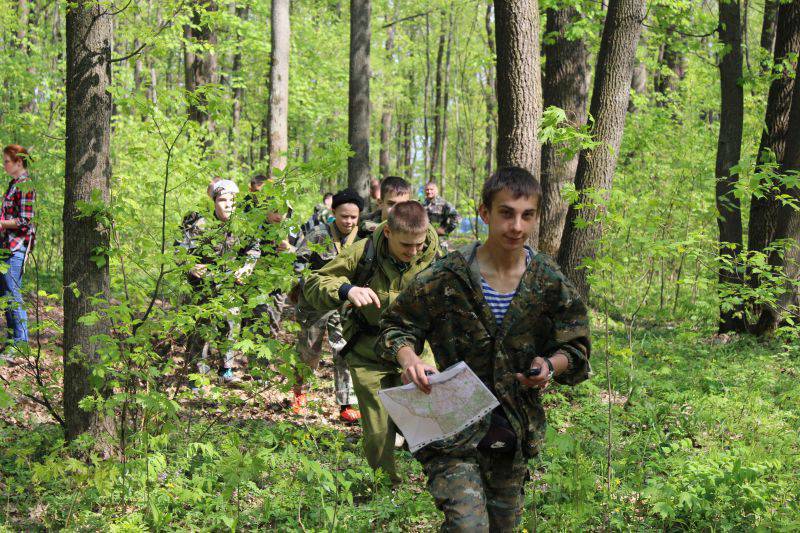 Frankly speaking, I couldn’t be able to say saiga along with the participants. Therefore, I chose the site where they were supposed to overcome the rise, and quietly trotted there. 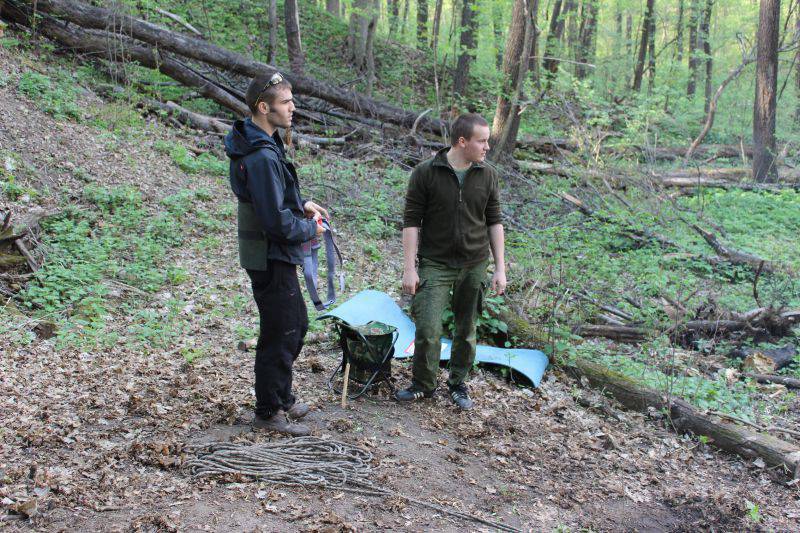 The judges are waiting. 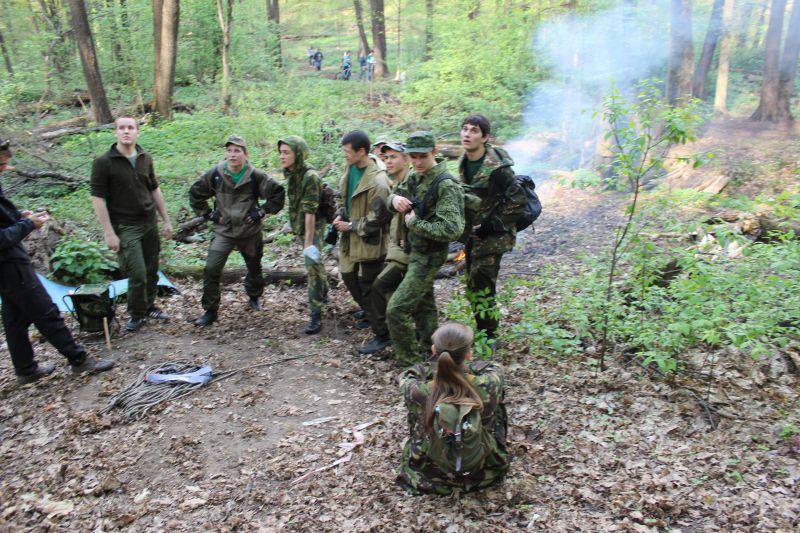 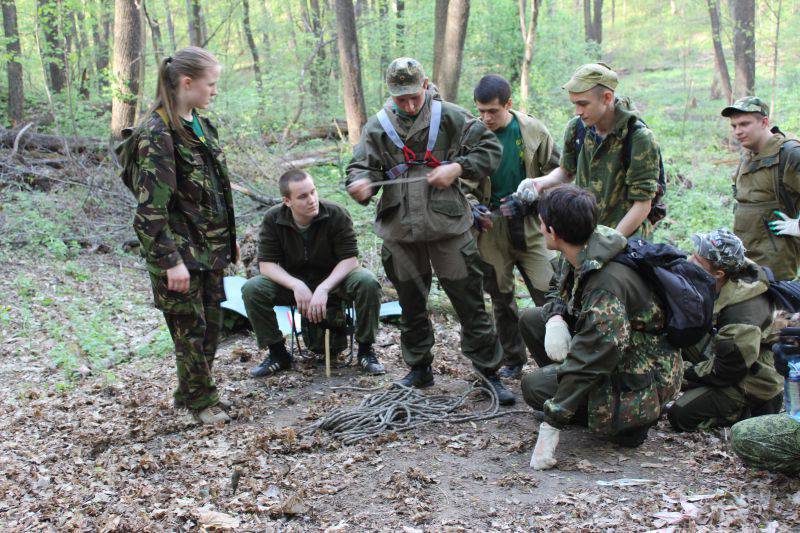 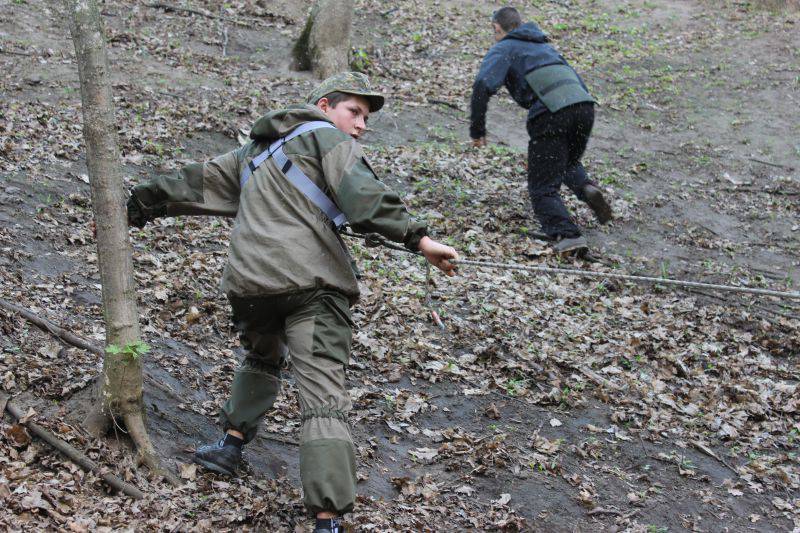 The first participant and one of the judges carry out lifting. 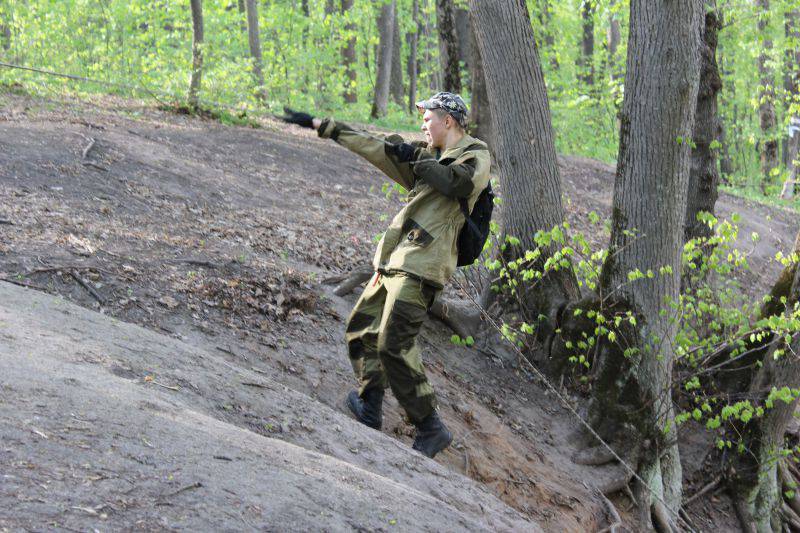 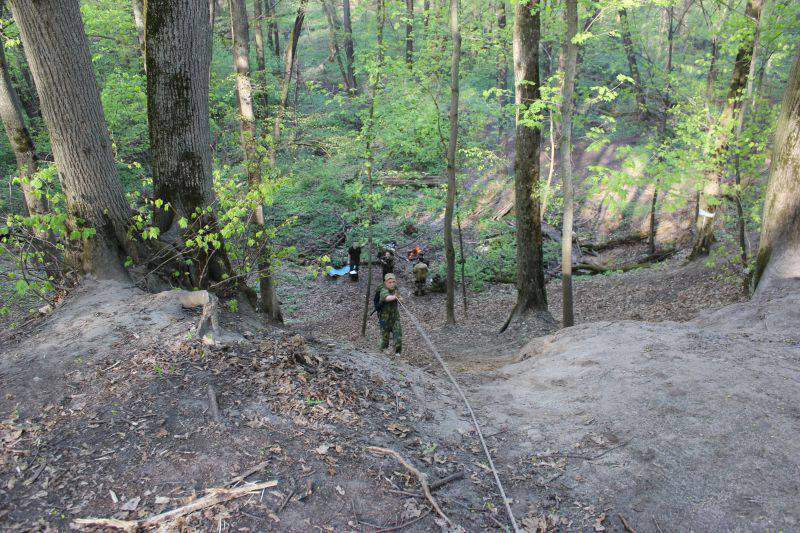 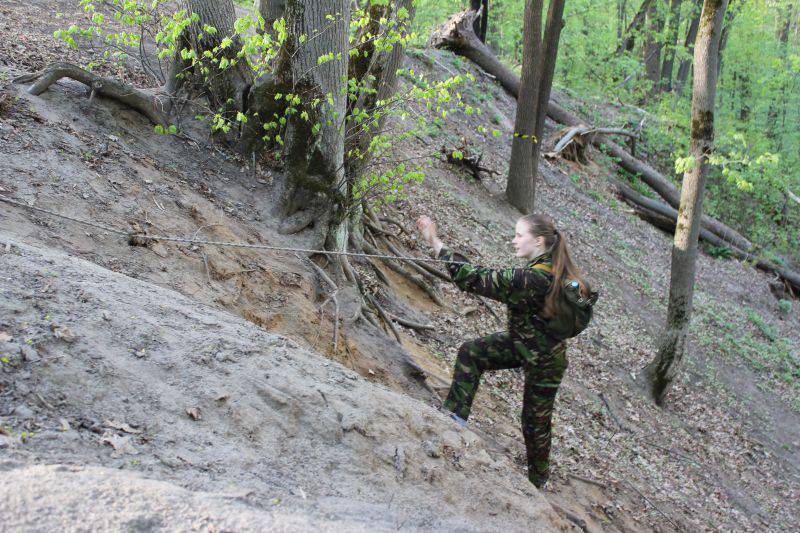 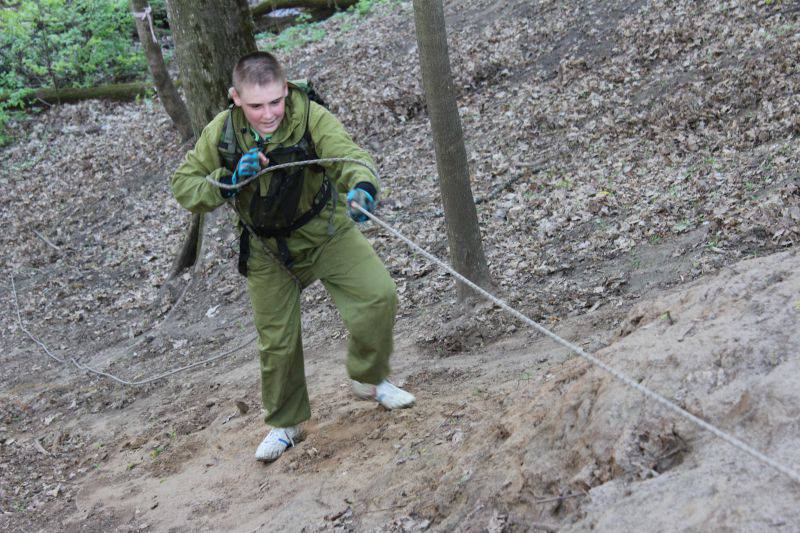 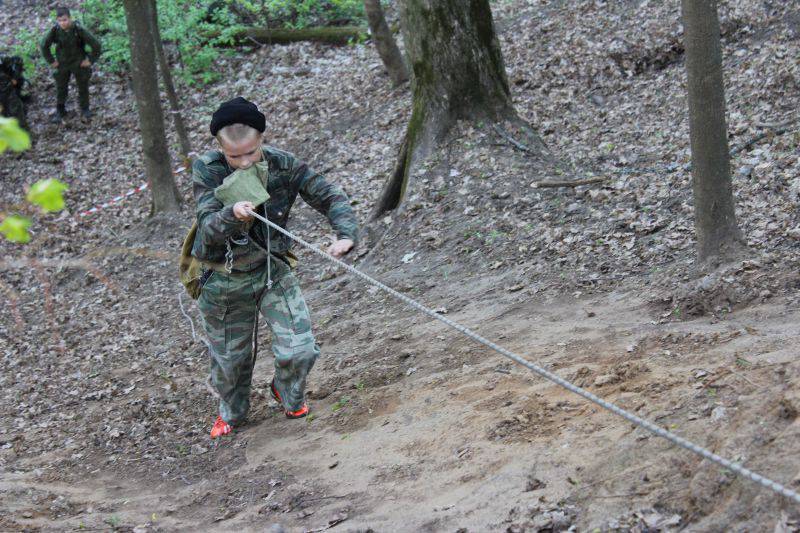 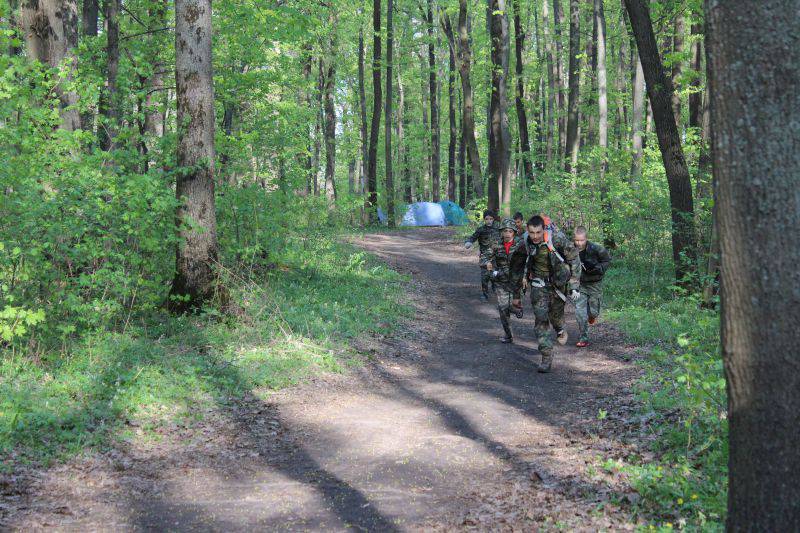 To the finish line! 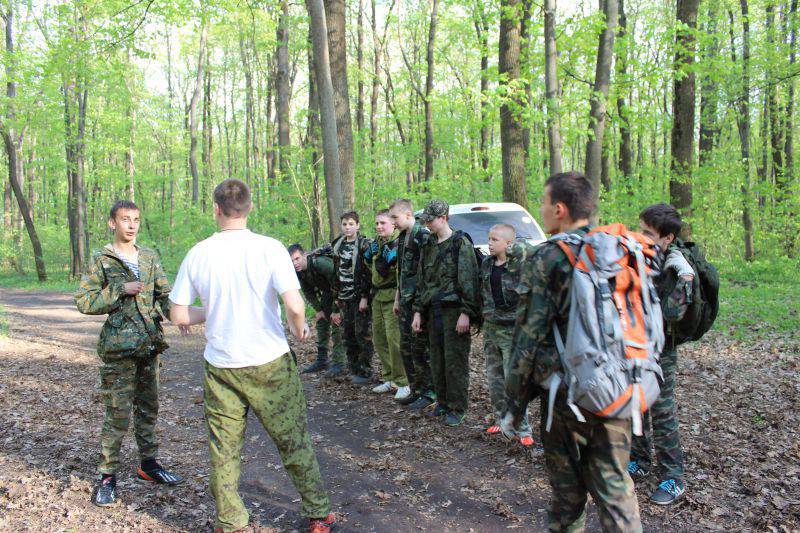 Report to the mentor. 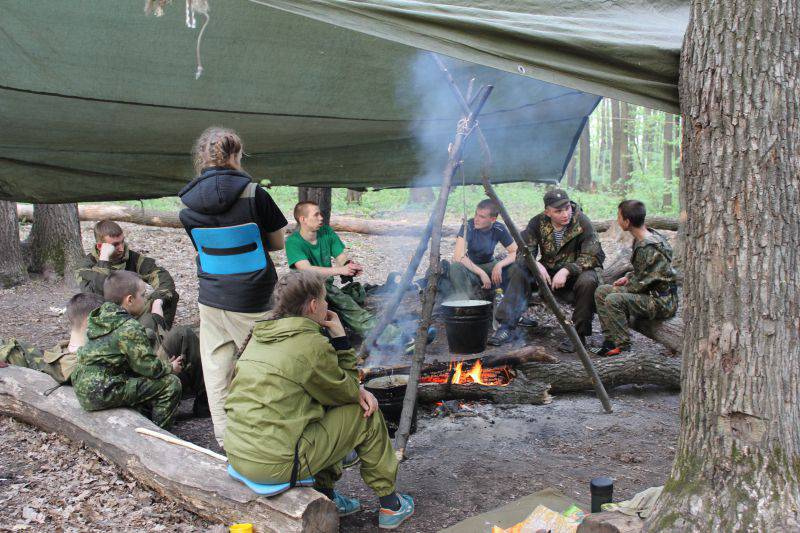 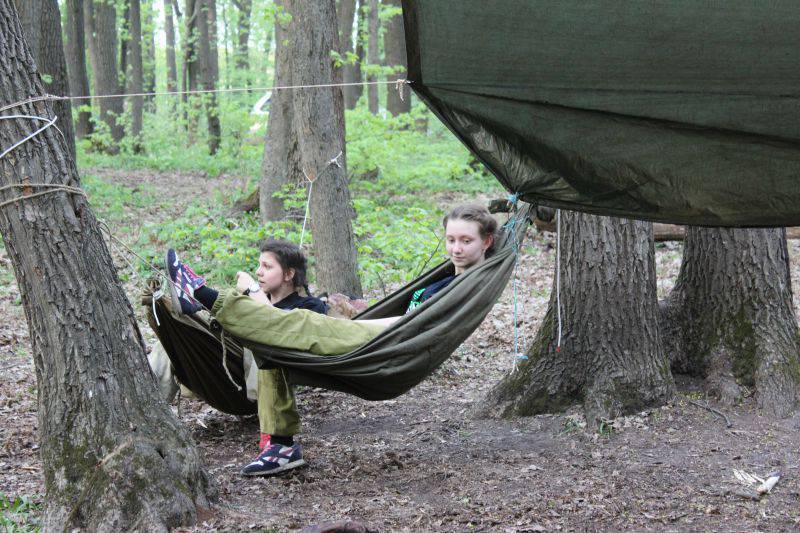 The lady has her advantages.

Amused such a moment: the organizers summed up, waited for the "snipers" to come, and the participants quietly dispersed to the camps and started cooking. On their own.

"And they have prepared tourists!" - told me. This was addressed to his team one of the mentors. It was about students 7 classes ... Slightly stunned, I went to check. He returned a little dumbfounded, for it was so.

In general, as an amateur to talk, I learned a lot of interesting things. So much so that the presentation of some moments of the patriotic education of young people intends to devote a separate material.

And I would like to finish today's story with such an episode. I asked, I confess, from personal interests, how it turns out to “reach out” to the guys and tear them away from computers and other delights of today. And Semyon answered me the following:

- I tell them the following: this is your country. You are her future. And, if I die in my old age in the Chinese garbage can, only you will be guilty of this. Here, it works ...

Here is such a May Day turned out in green-blue tones. And you say, "pheasants in fountains" ...

Ctrl Enter
Noticed oshЫbku Highlight text and press. Ctrl + Enter
We are
Results of the week. “In our cooperative, the board is always agreed”Special Purpose Triathlon 2012 Competitions
38 comments
Information
Dear reader, to leave comments on the publication, you must to register.