1 May 2015
28
The recent visit of Japanese Prime Minister Shinzo Abe to Washington was accompanied by noisy protests of the population in Okinawa and shelling from an improvised mortar (and this is not the first such case) of a US base in Kanagawa Prefecture. The completely open hatred of the Japanese population for the American military presence did not prevent the leaders of the two countries to discuss current relations in a warm atmosphere. Moreover, the Japanese leader was received with such honor that no one of his predecessors was honored. 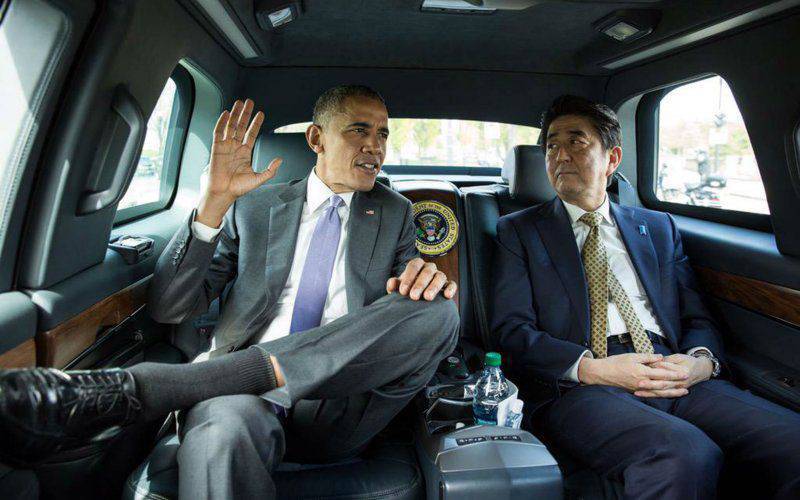 This honor, of course, turned out to be not just. Thus, Barack Obama clearly demonstrated to Congress and the entire American its concrete actions on the long-announced reversal to the Pacific Ocean. After all, in the United States for any big business you need clarity, a show and demonstration of the visit of the leader of the allied country for these purposes is quite suitable.

However, practical planes are much more important than visible effects. For example, negotiations on Trans-Pacific cooperation, which are quite difficult, because Japan fears an influx of agricultural products from the United States. Russia should be primarily interested in the military-political component, and it bears a very important, without exaggeration historical nature.

American officials have already said that the new principles of bilateral military relations will abolish any geographical restrictions for the Japanese Self-Defense Forces, which allows Japan to participate in defense operations around the world with the permission of parliament. In accordance with the previous agreements, Japanese and American operations were focused on the protection of Japanese territories.

Secretary of State John Kerry said that the agreements represent a historic breakthrough for Japan and its alliance with the United States. “Today we celebrate the creation of a new potential of Japan, which is able to protect not only its territory, but also the United States, as well as other partners as needed,” he said, speaking in New York to US and Japanese officials. “This will increase Japan’s security and contribute contribute to regional peace and stability. "

"The current principles are unlimited in geography," added Secretary of Defense Ashton Carter. "This is a very big change."

President Obama, in turn, reaffirmed that the United States remains firmly committed to providing military assistance to Japan in the event of a conflict with third countries. The size and nature of this military assistance will obviously vary depending on the degree of threat and the specific owner of the White House. So, the assumptions that Tokyo will be left in the face of threats from China and the DPRK have no basis. There are several reasons for this.

The first is the legal side. Japan and the United States are bound by a security treaty. Ignoring it would cast doubt on US guarantees in other parts of the world. For example, a treaty on military assistance within NATO. Yes, and direct image losses from the surrender of the main Asian ally will be enormous. Moreover, the administration that decides to do so will lose seats in the White House and Congress for a long time - voters and political opponents will not forgive weaknesses.

Japan is extremely important to the USA as the largest economy. Japanese transnational corporations, in fact, are Japanese-American, linked in an inseparable whole. The country of the rising sun is at the same time a major producer of sought-after goods and a key sales market, for example, for the American agricultural industry.

No less important is the geostrategic cause. Japan is the key to Asia and the Pacific. The Japanese island of Minami-Ivo, attributed to the metropolitan prefecture of Tokyo, is just 340 kilometers from the US-owned island of Faraglion-de-Paharos, which is part of the Mariana Islands. Marcus Island (Japan) is located in 1400 km from the famous Wake Atoll. The loss of Japan as a strategic beachhead poses a threat to the Northern Mariana Islands, Guam, Hawaii. And in the future, and the very American continent. 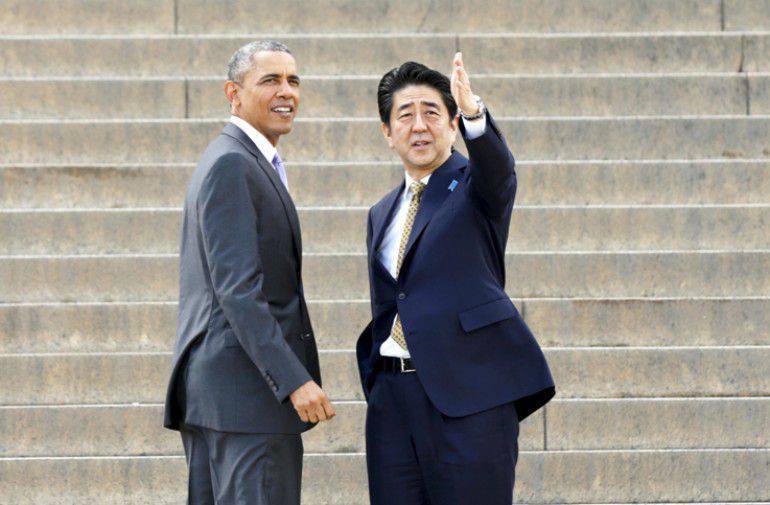 Understanding all this, the current US administration wants to show that it can not only demand, but give in return, so as not to inflame already strong anti-American sentiments. A preliminary agreement was reached on the transfer of Futemma's marine base from the densely populated part of Okinawa to outside Japan - an important and sensitive issue over which diplomats have been fighting for decades. If the base is moved from Okinawa to Guam, and the US President described the agreement in just that way, then this will be an important victory for Shinzo Abe in the domestic field, where the public has long demanded the elimination of this legacy of the occupation period. It is no secret that it is in Okinawa that the population is most negatively disposed towards the ruling party and now there is a chance to improve the situation.

The agreement on Okinawa also became a kind of compensation for Japan from the White House for spoiled relations with Russia, where an unprecedented breakthrough was planned before the Ukrainian epic began.

The Japanese themselves express well-founded claims in the press and blogs to the renewed alliance with the United States. No, patriotic citizens are not at all against strengthening the country's military power, but there are not unreasonable concerns about how this power will be used. In the meantime, everything looks in such a way that the Self-Defense Forces will become another US auxiliary army, such as how the British and French are now carrying out similar tasks. And Japanese taxpayers will pay for all this, and they have a reasonable question: “In exchange for what benefits are these victims?”

Logically, the collective defense provisions should come into force when the aggressor attacks not only Japan or the USA, but also the state with which both Tokyo and Washington are allied. At the same time, the attacked state does not have to be located in East Asia. It may belong to Europe or the Gulf region.

At the same time, it is necessary to take into account the peculiarity of American foreign policy, when any disagreeable country is appointed as global evil, against which a crusade is immediately being gathered. 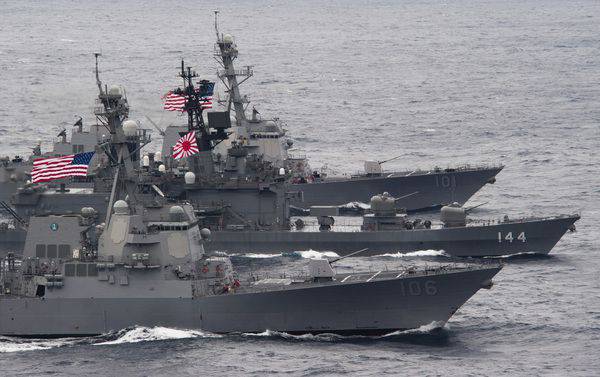 The epoch of the new redivision of the world, as we have already seen, suggests a flock of attacks on the one appointed to be a victim. At one time, Japan itself was in such a position, now it is gradually becoming the predator, even if in a pack under the guidance of others. The example of other former Axis countries is inspiring - for example, Italy has long been freed from military restrictions, built its own aircraft carriers and participates in military expeditions.

Anyway, the Japanese government expectedly preferred a bird in its hands to a crane hovering in the sky. In the role of tits is a long-standing US-Japan alliance, and the prospect of normalization of relations with Russia serves as a crane. Almost simultaneously with a visit to the United States, it was announced that Abe would not fly to Moscow for the Victory Parade on May 9, but at the same time the Japanese ambassador would officially represent the Land of the Rising Sun. In addition, the Japanese Prime Minister 30 even sent Putin a personal letter explaining the formal reasons for the absence of the Victory Parade, thus making it clear that he was forced to take such a step - thereby observing the necessary politeness. So, Tokyo does not burn all the bridges behind it, although diplomatic breakthroughs in such an atmosphere are hardly worth the wait.