One of the least known heavy fighters, created in our country on the eve of the war, was the so-called long-range fighter escort IDS created under the leadership of PDGrushin.

Peter Dmitrievich Grushin began working in the field of aircraft while still a student at the Moscow Aviation Institute with the construction of the aircraft "Steel" MAI. After receiving a degree in mechanical engineering in aircraft construction, Grushin was left at the institute and worked at the 101 (Aircraft Building) department, and then became the chief designer of the MAI design bureau. Working in this position from 1934 to 1940 year, he built a number of aircraft, among which the most famous was the BB-MAI light bomber.

In 1940, Grushin had the opportunity to prove himself at the real production base of the serial aircraft factory No. XXUMX in Kharkov, where he was transferred to the post of chief designer of the OKB KhAZ.
The main task assigned to the designer was the creation of a heavy long-range fighter as part of the overall development program for this type of aircraft.

Work on the project went pretty quickly. In December 1940 of the year, the non-built aircraft was given the name Gr-1, that is, Grushin-first.
Unlike the heavy twin-engine fighter OKO-6 built here, the IDS Grushin was designed for two liquid-cooled AM-37 engines designed by A.A. Mikulin with 1200 power HP. In terms of its aerodynamic configuration, the aircraft rather strongly resembled the German multipurpose fighter Messerschmitt Bf .110, which was well known at that time, and had overall dimensions close to it.

True, unlike Messerschmitt, Gr-1 was single, and the engine cooling system radiators were located under the center section of the wing and were made retractable. The exhaust manifolds of the engines were brought to the upper surface of the wing, as was done on the DIS of Mikoyan-Gurevich and TISe Polikarpov. The cockpit was armored. It is interesting to note that this factor was the basis for determining the crew size - one pilot or two. In terms of weight, the double version of the cabin with equipment for the gunner-radio operator was by no means heavier than an armored box welded from steel sheets and fully protecting the pilot. Nevertheless, Grushin gave his weights the task of analyzing the one and the other option, so it turned out that a fully booked single-seat cabin would be lighter on the 18 kg. And so this plane went single. Perhaps this decision was somewhat hasty, since the need for a second crew member on machines of this class was subsequently confirmed by the war.

The armament of the SID was powerful enough and in no way inferior to its main enemy - Bf.110. In the forward part of the fuselage there were two ShKAS machine guns, and above them were two 20-mm ShVAK cannons. Two more ShKAS were installed in the wing wings. All machine guns had 1250 ammunition for each barrel. The guns included ammunition for 300 shells. There was another lower ventral setting with two 37-mm guns with ammunition for 200 shells per cannon.
Under the wing of the aircraft, it was possible to install four girder holders for the suspension of eight 100-kg bombs or four missile shells PC-82 or PC-132. In addition, instead of the ventral cannon container on the inner suspension it was possible to place up to 500 kg of bombs. 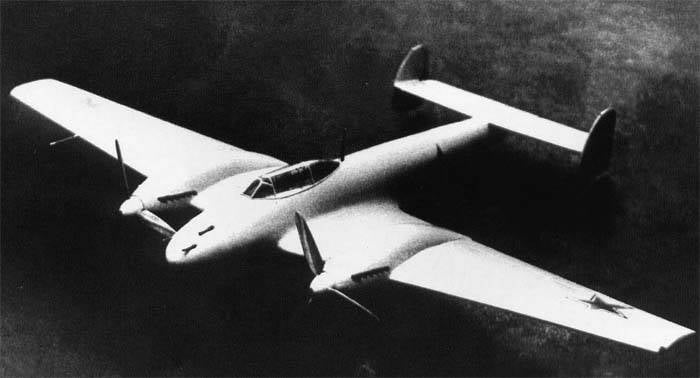 Despite the seeming similarity with the German Messerschmitt Bf.110, the Grushinsky IDS had a completely different design from it. The wing spars had a box-shaped cross section. Their walls and shelves were made of tapered steel strips welded in a closed loop. The knot connector spar had an original design with transverse combs.
The construction of the fighter, which received the designation Gr-1 in advance, was completed in just 9 months. Static tests on the strength of the structure took only a few days and, after the elimination of minor flaws, in the early spring of 1941, the prototype of the aircraft was sent to pass full-scale purging at TsAGI. For this, Gr-1 in June 1941 had to be disassembled and sent to Moscow. The assembly of the fighter was to be carried out at plant number XXUMX, but on the way from Kharkov, the train fell under bombing. The prototype was badly damaged, and all the project documentation was burned. In such circumstances, further work on the Gr-185 decided not to continue. In addition, by September the X-NUMX of the Pe-1 was already being built in series, and the Tairov Ta-1941 fighter was at the final testing stage and was also ready for mass production. But in the Gr-3 laid impressive flight performance.
According to Grushin's calculations, at the optimal height of 7200 meters, his fighter could reach a maximum speed of up to 650 km / h, and at a height of 5000 meters - 645 km / h. The practical ceiling of the Gr-1 was 11700 meters, the maximum range of flight (with full refueling of 2550 fuel liters) - 1890 km. At the same time, the plane had a run-up of just 400 meters and a mileage of 450 meters.

Even compared to the Ta-3, the Grushin fighter looked very promising, but it was not possible to actually confirm the high fighting qualities of the Gr-1. What was done with the damaged aircraft remained unknown. Perhaps, in order to avoid capture by the enemy, the remains of the prototype were completely destroyed.
Pd himself Grushin was sent to work at the plant number XXUMX, where he served as chief engineer and then deputy chief designer S.А. Lavochkin. After the war, he worked on the creation of anti-aircraft missiles and was subsequently awarded the title of twice Hero of Socialist Labor.

Maximum speed km / h
off the ground xnumx
at height 650

Ctrl Enter
Noticed oshЫbku Highlight text and press. Ctrl + Enter
We are
An-12 in AfghanistanFighters of the Second World War: the best of the best. The look of an engineer.
36 comments
Information
Dear reader, to leave comments on the publication, you must to register.