April 29 2015
39
Grenade launchers as a class of independent, not auxiliary weaponsappeared almost by chance. At some point, one of the skilled gunsmiths had the idea to adapt a separate type of weapon for throwing grenades, and then, as they say, it started. The prototype of the grenade launchers were flint, and at first, wick mortars designed for shooting hand grenades. They were already known in the XVI century. At one time, Peter the Great tried to introduce them widely into the Russian army, but nothing came of this idea because of the very strong recoil that made the firing of this weapon impossible except from the stop.


Today, rocket launchers have made a big step forward, occupying their niche on the battlefield. A grenade launcher is a portable small arms, which is designed to defeat equipment, enemy manpower, various structures with a shot of ammunition, which significantly exceeds the caliber of small arms in its caliber. Currently, the word grenade launcher denotes several classes of weapons: rocket-propelled grenade launchers (disposable and reusable), muzzle (barrel and barrelless), easel and hand, as well as barrel-mounted. It is about the latter and will be discussed in this article.

It is worth noting that the Russian arms school, traditionally occupying a very high position in the world, presented a huge number of samples of small arms. Any country in the world could envy this arsenal. So it was with the series 40-mm grenade launchers GP-25 and GP-30, which were created by Tula gunsmiths from the Design Bureau of instrument-making and are still in service with the Russian army and armies of other countries. The use of grenade launchers can radically expand the combat capabilities of an infantryman in the context of modern highly maneuverable combat operations. 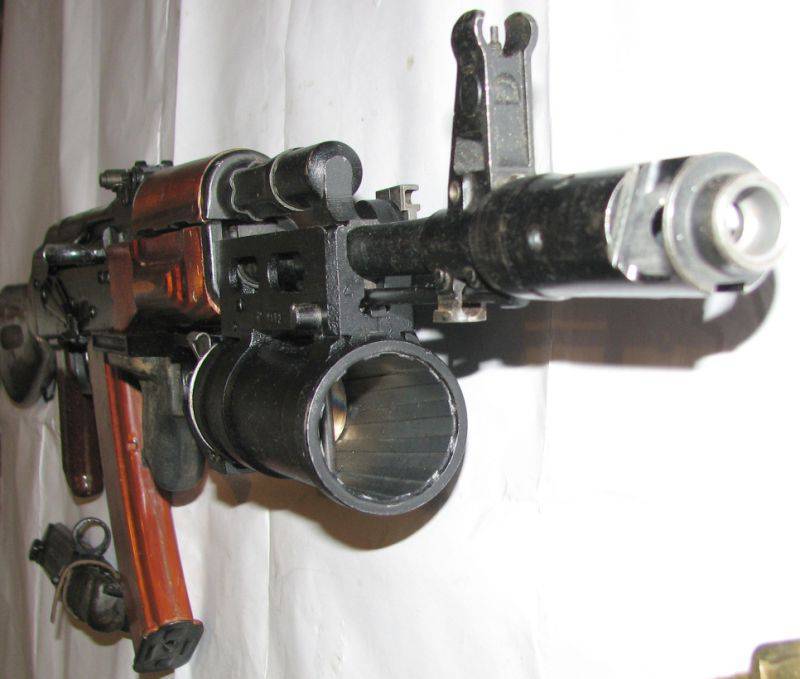 Work on the creation of a grenade launcher in the Soviet Union to expand the combat capabilities of infantry units began in the early 70s of the last century. The basis of these developments was based on the rich experience gained in the second half of the 60-s in the development of experimental grenade launchers in the framework of the design theme "Iskra". In 1978, the new grenade launcher was fully prepared and put into service under the designation GP-25. The grenade launcher was intended for installation on all existing Kalashnikov assault rifles - AKM, AKMS, AK-74 and AK-74С. In the 1989, the Soviet Army adopted an improved GP-30 grenade launcher, the main differences of which were a simpler design and a smaller mass.

The fact that the combat effectiveness of small arms can be increased by several times, combining machine guns and grenade launchers in a single design, Soviet specialists were well aware of, but active work in this direction began only in the 1970-s. According to the terms of reference required to create a grenade launcher caliber 40-mm. The work on the project, the complexity of which at that time was really high, was taken by the team of TsKIB SOO from Tula, a city in which love and passion for creating reliable and high-quality weapons is passed on from generation to generation. At that time, Vladimir Telesh, under the direction and control of which experimental work was carried out, already had a number of projects that were similar in their scheme to the project of a new grenade launcher.

But despite the experience of dealing with such systems, the USSR acted as a catch-up in this area. Shortly before the start of work on the grenade launcher in Tula, the Americans developed their own version of such a grenade launcher under the designation M-203. After a few years of hard work, trial, error, and various experiments, the first Soviet grenade launcher was created in the Soviet Union, which was designated GP-25 "Bonfire". 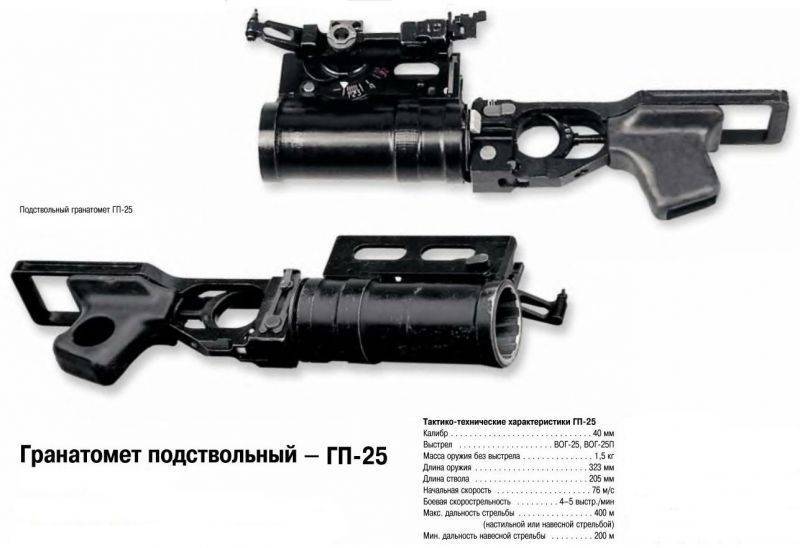 Sergey Milchak, an expert in the field of small arms and a veteran of military operations in Afghanistan, in an interview with the Russian television channel Zvezda spoke about his personal experience in using GP-25. According to him, the under-barrel grenade launcher is an indispensable thing in modern conflict. However, as in the case of the domestic GP-25, and with the American M-203, they were not immediately adopted. According to Milchak, with the start of the war in Afghanistan in Tula in 1980, a new grenade launcher began to be mass produced.

According to the expert, technically “Koster” is a very simple tool, as simple as a boot. At the same time in the army he was sometimes called the signal for the similarity with the signal (start) gun of that time. The grenade launcher trigger was very simple - the moving parts were at a minimum. He put a grenade in the barrel, aimed, fired a shot. Even a schoolboy could handle it. 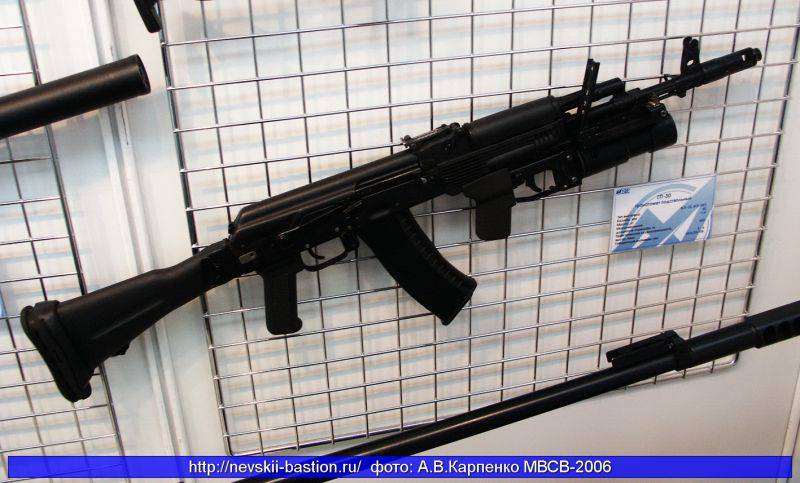 Being an individual shooter’s weapon, the “Koster” rifle grenade launcher could be used to defeat the open, as well as hiding in trenches, trenches and on the reverse slopes of enemy manpower. Possessing small dimensions (length 323 mm) and relatively small mass (1,5 kg without a grenade), the grenade launcher provided a sufficiently large range of aimed shooting. In terms of the rate of fire, the GP-25 was significantly superior to all other single-shot grenade launchers due to the lack of the need to extract spent cartridges from it, open and close the bolt, and also trigger the trigger. The combat rate of fire was 4-5 rounds per minute.

The VOG-25 and VOG-25П shots specially made for him made it possible to effectively hit the enemy's manpower at a distance of up to 400 meters. Standard gunner arrow consisted of 10 shots, located in two fabric bags, with slots for shots - 5 pieces in each. Bags were placed on belts on both sides of the fighter's torso, which made them available regardless of the position of the shooter at one time or another. Thanks to the wearable additional ammunition (NDB), the fighter’s arsenal could be brought to the 20 shots. At the same time, the submachine gunner always had to have an emergency supply of three shots to the grenade launcher, which the soldier could spend only with the permission of his commander. Sergey Milchik noted that during all the years of the Afghan war, GP-25 never failed those for whom it was created. According to him, the failures of this weapon in his memory have never been, and the veteran-Afghani did not meet soldiers who complained about this development of Tula gunsmiths.

After serving the good service to Soviet soldiers in Afghanistan and having completed all the tasks before him, in 1989 the GP-25 "Bonfire" was successfully replaced with an advanced grenade launcher of the same caliber - the GP-30 "Obuvka". It is worth noting that both names were quite in the style of the Soviet gunsmiths. This grenade launcher absorbed in its design all the best from its predecessor, as well as the experience of fighting in Afghanistan. Unlike its predecessor, the GP-30 has a sight on the right and does not require a range switch. In addition, the grenade launcher "lost" (weight without a 1,3 kg grenade) and became less labor-intensive in production. Also, the design has undergone changes in sight. 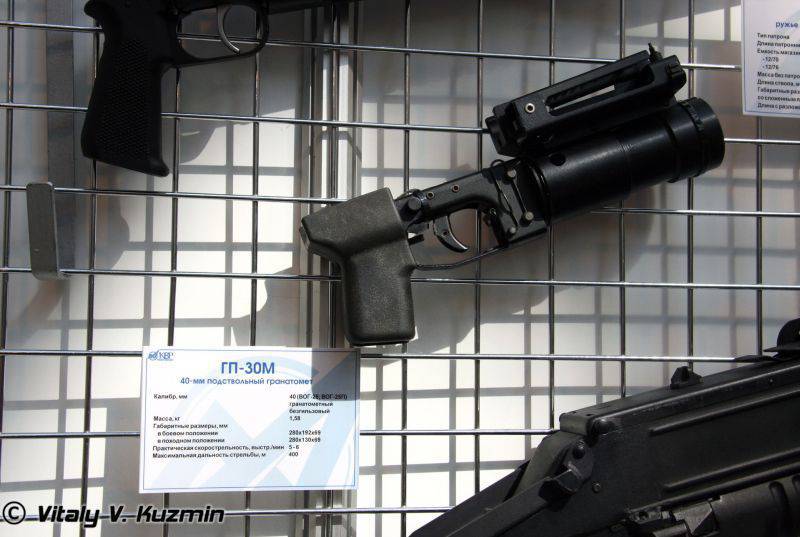 Despite the general similarity of the design and appearance, the GP-30 “Obuvka” had a much higher rate of fire than its Soviet predecessor and even more so its American counterpart - M-203. The combat rate of fire of the GP-30 grenade launcher reached the 10-12 rounds per minute. Once again, the task set before the Soviet gunsmiths designers was carried out brilliantly: the army received an excellent and quite effective means of fighting the enemy manpower, having received a reliable tool in their hands for solving problems on the battlefield.

A separate line in the military fate of the grenade launcher GP-30 are Russian military campaigns in the North Caucasus. Nikolay Kotz, the commander of the motorized rifle unit and the reserve officer, in an interview with the journalists of the TV channel “Zvezda” told him exactly what he remembered this, seemingly ordinary, grenade launcher. “I will never forget the case when we were surrounded by militants. Ammunition began to come to an end, but by some lucky chance we in the "Urals" turned out to be several boxes with "vogs" (shots for a grenade launcher). And here we are as dumbfounded, firing pistols in one direction and from grenade launchers in the other, were able to hold out for 4 hours, until our "turntables" flew to us. Commanders then told this historyNobody believed that it was possible to keep a defense for half a day from grenade launchers. Well, they didn’t believe their right, the main thing is that my company was able to leave without a loss thanks to this occasion, ”said Nikolay Kots.

In terms of their design, the GP-25 and the GP-30 are single-shot rifled grenade launchers charged from the barrel. On the case of a grenade there is a leading belt with ready-made cuts. They have a self-cocking trigger with automatic blocking of the shot when installed incorrectly on the machine and a manual safety device. The grenades used with them possess an original “caseless” design with a chamber for a propellant charge, which “flies” out of the barrel directly from the grenade. This decision made it possible to exclude from the reloading cycle of the weapon actions to remove the spent cartridge case from the barrel, which significantly increased the practical rate of fire of these grenade launchers in comparison with most foreign analogues. 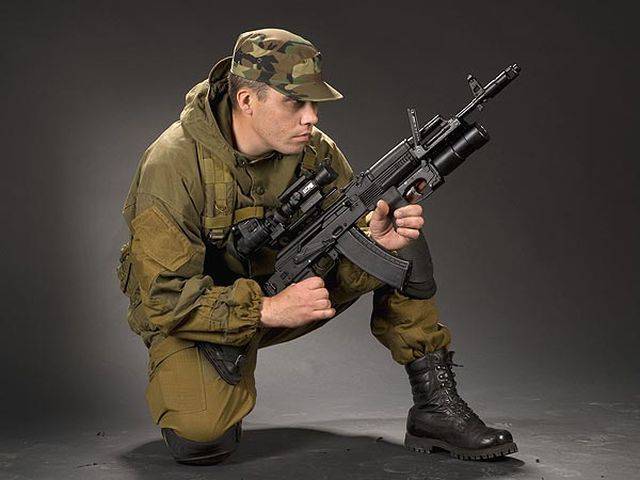 One of the main drawbacks of the “Koster” and “Obuvka” grenade launchers in comparison with counterparts from Western manufacturers is the limited selection of ammunition. With these grenade launchers, soldiers can use the entire 3 type of grenade. This is a standard FOG-25 fragmentation grenade, a "jumping" VOG-25P and a non-lethal Grenade grenade, which is equipped with tear gas. The VOG-25P jumping grenade differs from the usual one in that after hitting the ground near the target it does not explode immediately, but at first due to the special charge it “bounces” up to a height of about half a meter-meter and is already undermined in the air. This provides a more effective target cover (infantry in a shelter or a trench) with shrapnel. For VOG-25 grenades, the radius of the effective zone of destruction by shrapnel is about 5 meters, and the most effective firing range is 100-150 meters.

The modern version of the GP-30M, produced in Tula, can be used with all possible modifications of AK Russian-made, and with the implementation of appropriate modifications and with other models of automatic weapons. This significantly expands the fire potential of these weapons. This grenade launcher provides high combat readiness and is characterized by ease of use. The use of a trigger mechanism (USM) self-cocking type increases the combat readiness of the weapon and ensures its safety. The locking devices in the USM completely exclude the possibility of carrying out an accidental shot when exposed to inertial overloads, as well as firing from a grenade launcher that is not attached to the machine gun. For ease of targeting, the GP-30M is equipped with a mechanical frame sight, which takes into account the derivation of grenades over the entire range of the mounted and mounted trajectory of firing. The sighting frame is mounted on the bracket GP-30М, which gives the fighter the opportunity to use the grenade launcher in combination with any sample of the machine gun without mounting a special sight. 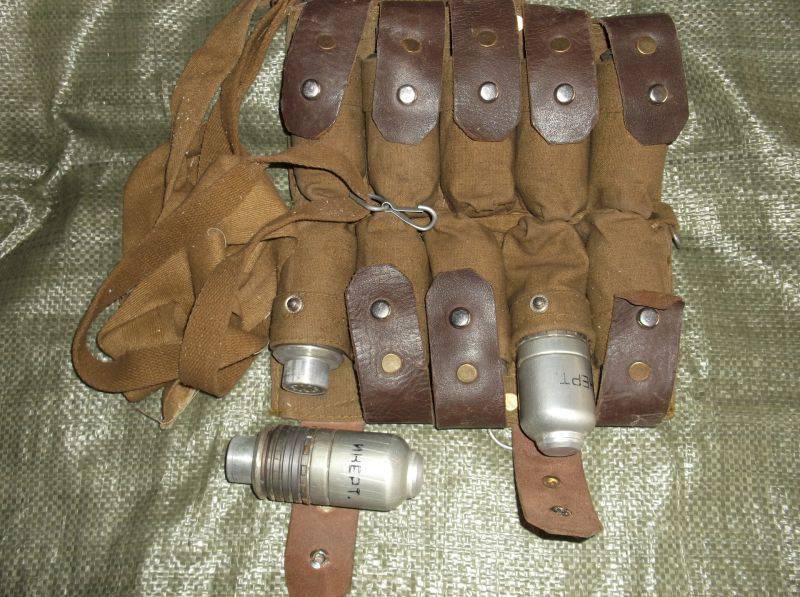 Tactical and technical characteristics of GP-30M: