What is the point of sniping, if the shooter, who possesses good skills, cannot, out of his adjusted rifle, charged with a powerful cartridge, accurately send a bullet to the target due to poor-quality aiming equipment?

Unfortunately, in the modern Russian army over the past 20 years in service did not appear new serial sniper sights of domestic production. Moreover, a number of fairly decent products produced, for example, the Novosibirsk Instrument-Making Plant, are in demand among the same hunters. Why this happened is a topic for a separate and, possibly, not one article. In most army and military units, including special forces, armed with are well known to many who still served in the SA sightings of the PSO series. 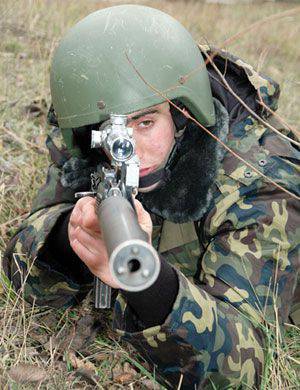 Photo from the archive of the author

The first of them - PSO-1 was developed in the distant 1963-m under the then adopted Dragunov sniper rifle (SVD). It is still in service with our army, although in the troops it is now called an automatic with increased accuracy, since it no longer corresponds to its mission. Sniper criteria armshave increased. But the sight, despite its age, has a number of advantages, which allows it to compete with foreign counterparts in the performance of regular combat missions for a motorized rifle sniper and even special units. What is the secret of such longevity?

He, according to snipers, lies primarily in the simplicity of bringing the JI to a normal battle and shooting at different distances. The sight allows you to work without loss of time for various calculations. For firing at any distance, you only need to switch the drum to the appropriate number, and at a distance of more than 1000 meters, aim the target at an additional target mark. The grid helps to measure the distance to the target, which is necessary for accurate shooting. The sighting square (otherwise it is also called the sighting mark) is the most successful of all used in the world sniper practice, since it does not close the target either from below or from above and therefore allows you to clearly select and control the aiming point. This is very important in sniper practice. The advantages also include the fact that the sight does not require parallax adjustment at different distances, since it has already been adjusted to them.

On the sight, there is a rubber eyecup, which is characteristic for PSO, and has an optimal length that facilitates the installation of the correct position of the aiming eye. In addition, it does not allow the appearance of light highlights of the eyepiece lens, which unpleasantly “illuminate” the visual field and tire the eyesight. There is a backlight sighting mesh, which when shooting at dusk is difficult to overestimate. In addition, the scope is very easily removed from the rifle and joins it.

This long-liver is also suitable for more modern sniper complexes adopted for service mainly in special forces units such as VSS, VSK and others. It is worth quoting several combat episodes with the participation of JI, mounted on these rifles.

Vladimir O., the commander of one of the special forces of the Armed Forces, noted the case when the fighters of his unit destroyed five militants from the VSS even before the main group of the enemy realized what was happening. “In the city of VSS (with PSO or night NSPU. - R.I.) is an irreplaceable thing, and the night is not a hindrance either.” The enemy does not hear or see ... Meters before 300 you shoot like in a dash, the main thing is alignment of sight, at night the result is the same, ”Sh. Aliyev shared his experience from the pages of Soldier of Fortune magazine in the North Caucasus. From a similar rifle, according to the recollection of Vladimir N. - then an ensign, instructor of the special intelligence unit of the 8 of the OSPN VV MIA of Russia, the special forces were silently neutralized the guards guarding the repeater on Mount Chaban in August 1999.

And today, having talked with snipers Sergeant Alexander V., Private Mikhail M. (604 of the Central Scientific Clinical Hospital of the Internal Troops of the Ministry of Internal Affairs of Russia) and junior sergeant Timur G. (31 of the Omsbr of the Central Military District), you can see that these sights are used in layouts with various rifles, fully justify themselves when performing regular tactical tasks. So, Alexander V. and Mikhail M., who repeatedly went on special business trips to the North Caucasus regions, noted that in the kit, for example, with the SIDS, the standard sight practically did not let them down. JIP is still easy to handle and unpretentious in operation, which allows you to conduct aimed fire at small targets at distances of the corresponding battle.

Another thing when it comes to sniper competitions or aimed shooting at a distance. Here the merits of the “grandfathers of sniper optics” end. All the interviewed snipers said with bitterness that when shooting with PSO (or its Belarusian counterpart - POSP, mounted on the Russian rifles MT-116M, CB-98, CB-99) at a distance over 300 – 400 meters, shooters have serious problems. A well-disguised target becomes invisible, merges with the terrain. The disadvantages of PSO snipers also include a weak fastener to the receiver, because of which amendments to the horizon are often strayed. The poor clarity of the optics (there are sights with glass of a yellow shade) and, again, a weak fastening of the battery, which is why there is often no backlight of the grid.

What do the valorous mare berets do in such cases? They simply buy good imported sights for their hard-earned sights and with their help achieve quite decent results in competitions in which they compete with experienced colleagues from the FSB, FSO or GRU of the General Staff of the Armed Forces. Only those who are armed, as a rule, are import samples of the sights of the companies NightForce and Leupold. The cost of them, by the way, from 160 thousand rubles.

Pro snipers, who work mainly as part of mobile or search reconnaissance groups in mountainous and wooded areas, cannot afford to target an enemy for a long time or to search for him at long distances. The only exceptions are ambush events, when the shooter is provided with a special sniper complex that allows you to complete the task. Observing over long distances and identifying a target through JI is very difficult. The size of the aiming mark at these distances can completely overlap the target, which leads to a loss of uniformity in aiming.

And in conclusion: the main problem of the PSO sight is still not a small magnification. Shooting with optics over long distances is hard in principle. Beginners try to put sights on their weapons with a larger increase. But then most often they state that they get worse with optics than with an open sight. This is due to the physiological characteristics of the human body: the greater the increase in sight, the more the arrow in the visual field jumps to the target and the harder it is to get into it. The heartbeat rhythm of the arrow only intensifies the problem of accuracy with the use of strong optics. Shoot with a large increase in sight can only be very trained snipers or those of them, the combat specificity of which allows shooting with the use of emphasis (bipod).

During the Second World War, the German and Finnish snipers on the Mauser-7,92 high-precision rifles, recognized as the best in the world, had sights with an increase of only two and a half times. It was believed that no longer needed. The Germans had scopes with a tenfold increase, but only masters fired with them. Such a sight got as a trophy, for example, the famous Russian sniper Vasily Zaitsev in a famous duel with the head of the Berlin school of snipers.

Ctrl Enter
Noticed oshЫbku Highlight text and press. Ctrl + Enter
We are
Commentary on A. Petrov's interview “Fire and Tactics in the Russian Army: Another Look”Trojan Horse for Asia Minor: how modern empires are built
Military Reviewin Yandex News
Military Reviewin Google News
28 comments
Information
Dear reader, to leave comments on the publication, you must sign in.