Bundeswehr tanks do not have effective ammunition ("Die Welt", Germany) 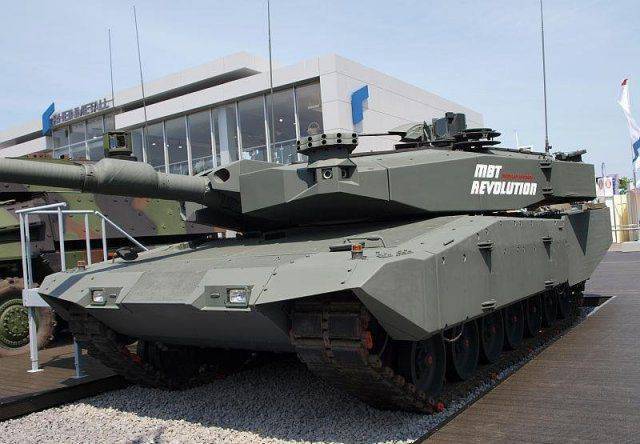 Tank Leopard 2, which is in service with the Bundeswehr, is one of the best in the world. However, the Bundeswehr soldiers lacked effective ammunition. This means: no chance against Russian tanks.

Currently, the Bundeswehr is not able to effectively deal with modern Russian tanks. In fact, the German army is armed with the 2 Leopard - one of the best battle tanks in the world. However, according to the newspaper Welt am Sonntag, the Bundeswehr lacks effective ammunition for this type weapons.

Tungsten-based feathered projectiles that are in service with the Bundeswehr do not produce enough kinetic energy in order to penetrate the technologically advanced booking of the latest Russian T-90 combat vehicles and the upgraded T-80.

Specific information regarding the capabilities of the 2 Leopard tank to counter modern protective technologies is secret, the Ministry of Defense emphasizes in response to a question from the Welt am Sonntag newspaper. However, "it is possible that in some cases there may be a modern booking capable of withstanding the effects of those projectiles that are currently equipped with a 2 Leopard tank." According to the Ministry of Defense, all significant arms manufacturers are participating in a constant competitive race and are trying to improve both the effectiveness of weapons and the protection of armored vehicles. Germany is also working to improve tank protection and projectile efficiency.

And Russia is actively engaged in modernization

During the implementation of the reform of the Bundewehr, the number of tanks Leopard 2 was originally reduced to 225 units. Due to the Russian aggression in Ukraine and to increase the combat readiness of NATO forces in Eastern Europe, Defense Minister Ursula von der Lyayen (CDU) decided to redeem 100 from previously destroyed tanks for 22 million euros from the 325 industry and bring their numbers in armed power up to xnumx units.


However, without effective munitions, these activities are “militarily meaningless” and more reminiscent of “placebo use,” notes Hans Ruehle, former head of the Defense Planning Planning Headquarters in the pages of the Welt am Sonntag newspaper. In his opinion, it is necessary to use shells with a uranium core. However, their use is a delicate matter politically.

According to the Welt am Sonntag, in the 2017 year, work will be carried out to further improve the existing fired tungsten based shells for armored vehicles. However, according to the available data, they can be used only by the latest version of the Leopard 2 tank - the A7 model. Such tanks in the armed forces of all 20. Most battle tanks are A6 and A5 series models. And the 100 of tanks being returned to production belong to an even earlier version of the A4. The 2 Leopard battle tank has been produced since 1979, and since then it has been constantly refined.

There is a significant increase in the combat capabilities of this tank in the A8 version, which is to be put into service with the Bundeswehr in the 2020s. As for the period after 2030, the possibility of creating a new combat vehicle in cooperation with France, which will be called the “Main Ground Combat System”, is being discussed.

But Russia is also actively engaged in the modernization of its tanks. The protection and effectiveness of the T-90 tank ammunition, which began shipping in the 1990s, was repeatedly improved. In the period between the 2017 and 2020, the year in Russia is planned to adopt the new Armata tank.