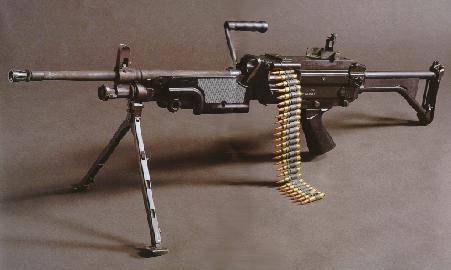 The FN Minimi machine gun was created by the Belgian company FN in 1974. He created the machine gun Ernest Verviers, which, unfortunately, is little known to the public (although he also participated in the creation of such a machine gun). armory legends like FN FAL and FN MAG). Minimi immediately took its niche in infantry weapons. A machine gun with tape power, under the cartridge of an intermediate caliber, significantly increased the firepower of the squads.


It is interesting to note that the Minimi prototype was created for the 7.62x51 cartridge, but then the caliber was changed in favor of the 5.56x45.
The principle of operation of the automatic machine gun based on the removal of gases from the barrel, which push the gas piston acting on the bolt carrier. The bolt carrier begins to move backward, but the bolt remains motionless for the time being. After some time, the shutter is unlocked. This is done to ensure that the pressure in the barrel has dropped to acceptable values ​​by the time the bolt is unlocked. The bolt is locked by cranking the larva and has an 2 lug. Shooting is conducted from an open shutter, which provides better ventilation of the chamber and the barrel.

The machine gun has a two-position gas regulator. As usual with machine guns, the second position of the gas regulator is used only in difficult firing conditions and is not designed for long-term operation under normal conditions. Also, the second position raises the rate of fire to more than 1000 rounds per minute. The weapon has a mechanical button fuse above the pistol grip. In the "protected" position, the sear disconnects with the other elements of the trigger. The machine gun has only an automatic fire mode.

Mimini is equipped with a quick-detachable barrel that allows you to continue firing when overheated. Also because of this, you can often watch modifications of a machine gun with a different barrel than is provided for. 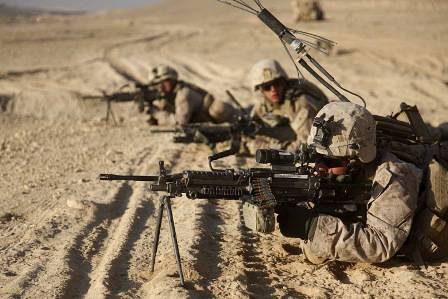 A US Marine is firing from a M249 Para with a PIP barrel mounted.

The receiver of the machine gun is made of extruded steel, the pistol grip and handguard are polymer or metal (depending on the modification). The weapon is equipped with a folding bipod.
The original version of the FN Minimi had a polymeric forearm and a metal frame butt. The Para model created on its base was completed with a shortened barrel and a telescopic frame butt.

In 1982, the FN Minimi machine gun was adopted by the United States under the M249 index as part of the Army Small Arms Program after conducting competitions for the SAW (squad automatic weapon) concept. Also, Minimi Para was adopted as the M249 Para. By 1985, the M249 production order was suspended due to military dissatisfaction with burns on the open part of the barrel of the machine gun. In connection with this was launched
program product improvement program (PIP) to address these shortcomings. A modernization kit was released for existing machine guns, including a new polymer
closed on the fore-end and polymer awkward stock with a hydraulic compensator recoil. New machine guns that were released after the implementation of the PIP program have lost
two-position gas regulator in favor of one-position. The handle for carrying was transferred to a removable barrel. On some parts of the machine gun were added chamfers for
prevent cuts about them. All butts and trunks of all versions M249 are interchangeable. 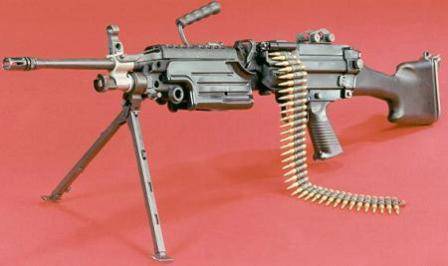 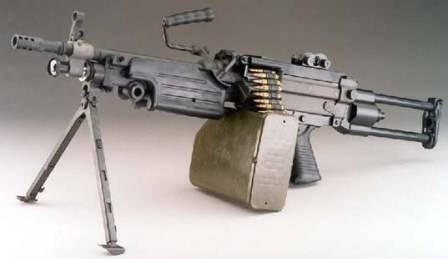 After some time, within the programs of the Soldier Enhancement Program and the Rapid Fielding Initiative, a cloth box-cartridge pouches for ribbons were created, on top of the receiver were added
Picatinny rails, and the butt replaced by a telescopic multi-position. Also within these programs, a metal forearm with Picatinny rails has been created. 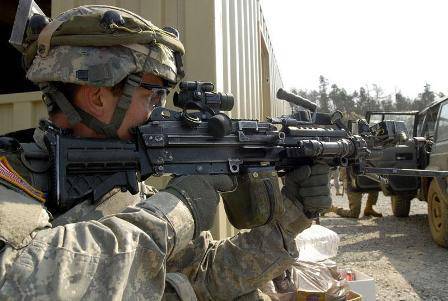 By order of US SOCOM, a Minimi Para modification was created known as M249 SPW (Special purpose weapon). To facilitate the possibility of store supply was removed from the machine gun,
installed metal forearm with Picatinny rail. 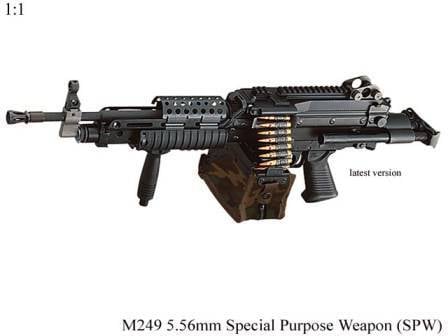 Another version of the machine gun for special forces called Mk 46 Mod 0. The modification is equipped with a lightweight barrel, high metal forearm with Picatinny rail. The possibility of food from the stores removed. Later an improved version of the Mk 46 Mod 1 was created, among other things, also equipped with titanium bipods. 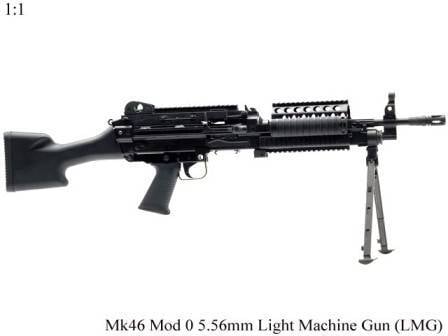 Separately, it is worth mentioning such a modification of the machine gun as the Mk 48 Mod 0. Option created by order of US SOCOM, chambered for 7.62x51. The main difference from the version for chuck 5.56х45 is the new self-regulating gas discharge system and the new hydraulic recoil compensator in the butt. Sights also differ. A modification of the Mk 48 Mod 1 with a shortened barrel was also released. 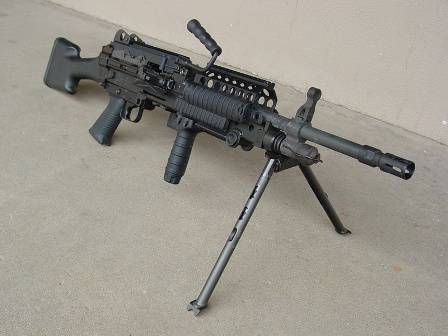 All M249 machine guns are manufactured by FN in the USA.

The machine gun in its characteristics surpasses such samples as the Russian PKK, the British L86 LSW and other machine guns under an intermediate cartridge, fed exclusively from shops. AT
Unlike these samples, Minimi was originally created as a machine gun, and is not an adaptation of the assault rifles that existed at that time.