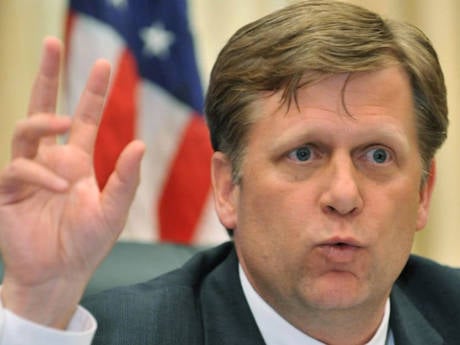 The decision of Russian President Vladimir Putin to annex Crimea ended the era that began after the end of the Cold War in Europe. From the last years of Gorbachev-Reagan, this era was determined by the zigzags of cooperation and disputes between Russia and the West, but its main meaning was always that Russia gradually joined the international order. This is no longer.

Our new era is defined by ideological clashes, a nationalist upsurge and territorial seizure — an era to some extent similar to the tragic European periods of confrontation in the 20 century. And yet there are important differences - and an understanding of these differences will be crucial to the success of American foreign policy in the coming decades.

We did not seek this confrontation. A new era has crept up to us, because we have not completely won the cold war. Communism has disappeared, the Soviet Union has disappeared, Russian power has diminished. But the collapse of the Soviet system did not lead to a smooth transition to democracy and market relations within Russia, or the integration of Russia into the West.

Some Russians have advanced further than others on a huge agenda of revolutionary changes that led to the results: the relatively peaceful (so far) collapse of the Soviet empire, which has become richer than ever before. stories, Russian society, greater protection of private rights and episodically functioning democratic institutions.

But the simultaneous introduction of democracy, economic depression and the loss of the empire led to a reverse counter-revolutionary reaction - longing for the old order and discontent with the conditions of the end of the cold war.

Proponents of this view did not always constitute a majority in Russia. The coming to power of the advocate of this ideology, Vladimir Putin, was not inevitable. Even Vladimir Putin’s own views have changed over time, hesitating between nostalgia for the old order and a realistic understanding of the need to move forward for Russia.

And when he chose the pro-Western liberal, Dmitry Medvedev as 2008 as his successor, Russia's internal transformation accelerated the pace. Although the invasion of Georgia in 2008 isolated Russia for some time, in the end its integration into the world order was given a significant impetus.

In the first years of my work in the government, I witnessed the mutually beneficial cooperation between President Medvedev and President Obama: a new treaty on strategic offensive arms, new sanctions against Iran, new supply routes through Russia for our soldiers in Afghanistan, and Russia's membership in the WTO. These results of the "reset" promoted several US vital national interests. It seemed that the American policy after the end of the Cold War to engage and integrate, equally practiced by democratic and republican administrations, is working again.

When Vladimir Putin became president at 2012, this impulse slowed down again and then stopped. He returned when tens of thousands of Russians protested against rigged elections and, in a broader sense, against an unaccountable government. If the majority of Russians praised Putin for his actions during the first two terms, from 2000 to 2008, for restoring the state and growing the economy, some (not all) wanted more from his third term, and he did not have a clear answer for them .

Mr. Putin was especially angry at the young, educated and wealthy protesters in Moscow, who did not appreciate (from his point of view) that he made them rich. So he turned back, setting a limit on independent behavior, so reminiscent of Soviet days. He attacked independent media outlets, arrested demonstrators and demanded that the rich go home. In addition to autocracy, Vladimir Putin needed the enemy — the United States — to strengthen his legitimacy. His propagandists started creating clips about the immoral methods of American imperialism and the alleged plans to overthrow the Putin government. As an ambassador in Moscow, I often appeared in these works of art in the lead role.

The shrill anti-Americanism of the Russian leaders, taken up by state-controlled television, achieved a fantastic supply with the annexation of Putin by the Crimea. He made it clear that he is confronting the West, no longer feels restricted by international law and is not afraid to reconsider international order with the help of force.

Mr Putin made a strategic turn. Guided by our past lessons learned from the conflict with Moscow, the United States must also build its policy through deterrence and commitment.

The parallels with the ideologically rooted conflicts of the last century are striking. The revisionist autocratic leader stirred up this new confrontation. We did not start it, nor did Russia, only Mr. Putin himself did it. It was not by chance that before the invasion of the Crimea, he weakened democratic institutions in Russia over the past two years, and then completely switched to the closure of independent media during the seizure of Ukrainian lands.

In addition, as in the past century, the struggle between autocracy and democracy has returned to Europe. Democratic institutions have not fully taken root in Russia, and this struggle has not stopped. But now democratic societies must recognize Putin’s rule as autocratic and lead an intellectual and legal struggle against him with the same energy that we had in Europe against anti-democratic governments in the past.

And as before, the Kremlin has ways of undermining democratic governments and countries with the help of old tools — armed forces, money, the media, secret police and energy carriers.
These common features recommend certain strategic steps. Most importantly, Ukraine must succeed as a democratic, state-driven market economy. First on the list of its reforms should be energy efficiency and diversification, as well as military and anti-corruption reforms. Other important states of the region, such as Moldova and Georgia, also need urgent support.

In addition, as in the 20 century, states on our side must be assured of security guarantees. NATO has already advanced in this matter, but these efforts should be supported by placing more military equipment in the border states, greater efforts to train and integrate forces, and reduce the dependence of NATO member countries on Russian energy resources.

As before, the Kremlin regime must be isolated: the strategy of changing its behavior through integration and rhetoric is over. There should be no more membership in the G8, accession to the Organization for Economic Cooperation and ABM negotiations. Instead, sanctions should be applied, including against organizations and propagandists, state-owned enterprises, bankers associated with the Kremlin, all those who act as an instrument of Mr. Putin’s compulsory power. On the other hand, individuals and companies not affiliated with the government should be supported, especially those who are trying to withdraw assets or emigrate from Russia.

Finally, as during World War II and the Cold War, the United States and our allies can cooperate with Mr. Putin when our vital interests overlap. But this obligation should be understood as strictly transactional, and not as a means to keep Russia in the field of accepted international norms and values. This is how he will see this commitment. You should also do us.

At the same time, many important differences distinguish this new confrontation in Europe from the Cold War or the era between wars. Most help us. Some do nothing. On the one hand, unlike communism or even fascism, Putinism is not attractive outside of Russia. Even in Russia, brave civil society leaders still challenge autocracy, war, and nationalist fervor; they have mobilized tens of thousands against Mr. Putin’s interference, while a large but quiet part of society will simply mourn the advent of this new era.

In my last job, I met these quiet skeptics — in government, business and society. Citizens rally around the flags of the country during crises, and propaganda works. But Putin’s nationalism is fueled mainly by oil revenues and non-Soviet anti-Americanism. It will be difficult to continue to frighten Russians with the American environment and domestic intervention, they are too clever for that.

Secondly, Russia’s Mr. Putin has no real allies. We must keep this state of affairs. Dividing Chinese from Moscow revisionism is especially important, it will help preserve independent states in Central Asia and the Caucasus.

Another difference is that Russia's military power is only a shadow of Soviet power. A new global conflict is unlikely. But the Russian military can still threaten the border states, so Europeans should strengthen their defenses, and Western governments and companies should stop providing assistance for the military modernization of Russia.

Another difference is that during the last confrontation the Internet did not exist. Attempts by the Kremlin to cut off its citizens from independent information take place, but the revolution in communications means that modern Russians will not be cut off like their grandparents.

The greater impact of the world provides Russians with information for comparative analysis to reflect on their internal situation. It is a powerful tool that should be cherished through the system of educational exchanges, the system of equal dialogues and the possibilities of connecting the Russian private sector and its international partners.

But there are two significant differences that weaken our position. First, the United States does not have the moral authority that was in the world in the last century. As an ambassador, it was difficult for me to defend our obligations to sovereignty and international law, answering the question of the Russians: “What about Iraq?”. Some existing practices of American democracy also do not inspire observers abroad. To win in this new conflict, we must restore the idea of ​​the United States as a model.

Secondly, we are experiencing disunity in international affairs. After two wars, it was inevitable. As we retreat, Russia is coming. Leaders in Congress and the White House should work together to signal our readiness to lead a free world in this struggle.

The United States, along with Russians wishing to live in a prosperous and democratic Russia, will win this new European conflict. Over the past century, democracies have consolidated at a marked pace, while autocracies continued to fall. Especially in educated, wealthy, urban societies, such as in Russia, democracy is ultimately established. A democratic Russia will not always define interests as it is now, but it will become a more stable partner along with other democratic states.

We cannot say how long the current autocratic government will tolerate in Russia. But a sober, realistic strategy to counter this new threat will help reduce the tragic era that we have just entered.