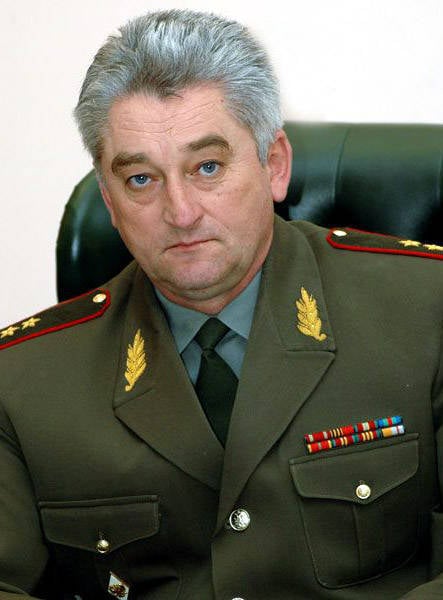 In the Main Operational Directorate of the Russian General Staff, the chief has changed. Vladimir Zarudnitsky was appointed to the place of the dismissed President Andrei Tretyak. According to the official version, the reason for the resignation was the state of health of Tretyak, but experts do not believe this.


On Monday, President Medvedev signed a decree dismissing Lieutenant General Andrei Tretyak from the post of chief of the Main Operations Directorate (GOU) of the General Staff of the RF Armed Forces. In his place was appointed Lieutenant General Vladimir Zarudnitsky, who had previously served as deputy commander of the Southern Military District. The same decree, published on the Kremlin’s website, sent to the reserve the deputy chief of the department of state administration and national security of the General Staff Military Academy, Major General Yevgeny Derbin and the deputy commander of the military transport aviation Major General Valery Shemyakin, and Colonel Dmitry Voloshin was appointed chief of combat training for long-distance, military transport and special aviation - the chief inspector-pilot.

Experts believe that the position of the head of a public educational institution is perhaps more important than the position of chief of the General Staff. “The head of a military educational institution is the brain of the army,” Colonel Anatoly Tsyganok, head of the Center for Military Forecasting, told MN. With the help of the State Educational Institution, the General Staff organizes the planning and management of all troops of the Armed Forces of the Russian Federation. The head of the military educational institution is responsible for how, if necessary, the army will act in each operational sector. In addition, the Main Operational Directorate organizes the interaction of the Armed Forces with federal executive bodies, as well as with the CSTO Joint Headquarters.

The fact that Tretyak will leave his post, it became known in the summer. In July, the media reported that he, along with the Chief of General Staff - First Deputy Commander of the Ground Forces, Lieutenant-General Sergei Skokov and Head of the Electronic Warfare Directorate of the General Staff Major-General Oleg Ivanov, wrote a report on dismissal. It was asserted that the cause of the demarche was the dissatisfaction of the generals with the ongoing military reform and difficult relations with the chief of the General Staff, Nikolai Makarov.

These reports were refuted by the Secretary of State of the Ministry of Defense Nikolai Pankov. Confirming that the generals had indeed filed reports of dismissal, he said that the reasons for this move were more prosaic than the press claimed. According to him, Skokov and Ivanov were offered other positions, but they preferred to leave the ranks of the Armed Forces, and Tretiak decided to quit due to health problems.

“My decision to dismiss from the army is in no way connected with the issues of reforming the Armed Forces, and even more so with some disagreements with the leadership,” he said after some time that the rumors appeared himself.

The statement that health problems caused the Tretyak’s dismissal sounds strange, to say the least, says Anatoly Tsyganok. “Officers, when appointed to higher posts in the General Staff, undergo a thorough examination, since they are expected to serve there for at least five years. In addition, every year the officers undergo medical examinations, ”the expert explained.

Doubt that Tretyak quit for health reasons, and the chief editor of "People's Defense" retired colonel Igor Korotchenko. “Of course, anything happens, but to believe that the general resigned due to illness is difficult,” he said.

According to the expert, it is much more likely that the Tretyak did not want to rotate and leave somewhere from Moscow. A similar opinion is shared by the Gypsies. He recalled that the two generals who had written reports of dismissal at the same time as Tretiak directly connected their decision with their reluctance to serve in another region. “Indeed, what is the point of sending, for example, to the Transbaikalia a person who has served up to the general in the General Staff, albeit for an equivalent position? The senior officers of the General Staff are all the more valuable the longer they have worked in one place, since it only takes a year to fully take over the business of their predecessor, ”said Gypsy.

Experts explain the time lag of several months between the writing of the report by Tretyak and his actual dismissal by technical difficulties that accompany his dismissal from such a significant post. “He had to find a substitute,” believes Tsyganok. In addition, Korotchenko said, there is a tradition: before the dismissal, the generals go to the hospital for a month and a half, where they undergo a full medical examination. “He could spend this time there,” the expert believes.

Curriculum Vitae:
Lieutenant-General Vladimir Borisovich Zarudnitsky was born on 6 in February of 1958 in the city of Abinsk, Krasnodar Territory.
In 1979, he graduated from the Ordzhonikidze Higher All-Arms Command School (Vladikavkaz). In 1989, he graduated from the MV Frunze Military Academy, in 2003, the Military Academy of the General Staff.
He served in the Group of Soviet Forces in Germany (GSVG).
In 1979-1985 - commander of a platoon, reconnaissance company as part of GSVG.
In 1985-1987 - The chief of intelligence regiment as part of the GSVG.
From 1991 to 1994, the year was chief of staff of a regiment, commander of a regiment in the Far Eastern Military District.
In 1997-1999 - Chief of Staff, commander of a separate motorized rifle brigade in the North Caucasus Military District.
From 2003 to January 2005 commanded the 27-th Guards Motorized Rifle Division of the Volga-Urals Military District.
From January 2005 to February 2007, Vladimir Zarudnitsky was chief of staff - first deputy army commander in the Siberian military district.
From February 2007 to April 2009, Commander of the 36 Army of the Siberian Military District (Ulan-Ude).
In 2009-2011 - Chief of Staff - First Deputy Commander of the Moscow Military District.
In March, 2011 was appointed deputy commander of the Southern Military District.
October 3 2011 by decree of the President of the Russian Federation Dmitry Medvedev, Lieutenant-General Vladimir Zarudnitsky was appointed Chief of the Main Operational Directorate of the General Staff of the Armed Forces of the Russian Federation - Deputy Chief of the General Staff of the Armed Forces of the Russian Federation.
He has state awards and prizes of the Ministry of Defense of the Russian Federation: the medal "70 years of the Armed Forces of the USSR", the medal "50 years of Victory in the Great Patriotic War 1941-1945", the medal "For strengthening the military community", the medal "For distinction in military service" I degree, medal "For perfect service" II and III degree, etc.
Ctrl Enter

We are in Yandex Zen
General with Syrian experience. The head of the military operation in Syria was appointed commander of the Southern Military District
Heroes of the war with Georgia are returning from opals
10 comments
Information
Dear reader, to leave comments on the publication, you must to register.