2 September 2013
32
"Zoo-1" (index GRAU 1Л219М) - radar reconnaissance and fire control (counter-battery radar). The radar complex is designed for reconnaissance of the firing positions of enemy missile-artillery weapons (mortar positions, artillery positions, positions of the MLRS, launchers of tactical missiles and air defense systems). "Zoo-1" performs the calculation of the trajectories of missiles and shells, is able to adjust the fire of their artillery, monitor the airspace and monitor unmanned aerial vehicles.


The complex began to be designed in the USSR in the 1980-s for the replacement of the ARC-1 complex in the artillery troops (GRAU index 1RL239, “Lynx”), which was developed at the end of the 1970-s. The new complex was placed on the base of the MT-LBu chassis, thanks to which it has an external similarity with ARC-1. 2 enterprises, the research institute Strela and NPK Iskra, were involved in the creation of the Zoo. The collapse of the USSR that followed soon led to the fact that these two enterprises turned out to be in different countries, where they independently continued to work, being now competitors. NPK Iskra, which turned out to be on the territory of Ukraine, continued to work on the creation and modernization of the 1L220-U Zoo 2 complex, based on a different chassis with a greater target detection range, but lower bandwidth and other software and hardware solutions.

FSUE SRI "Strela" from the city of Tula continued work on the modernization of the complex "Zoo-1" (in particular, work was carried out to improve the communication system and the software and hardware of this complex). The new complex, developed by the company, received the index 1Л219М (modernized) and was first presented to the media in 2002 year. Most likely in 2004, a number of these complexes in single copies were transferred to troop tests in the Armed Forces of Russia. The end of military tests of the complex officially ended on February 19 of the year 2008, the complex had already been adopted by the Russian army a year earlier. It is assumed that several such complexes could take part in the August 2008 events of the year in South Ossetia. As part of the modern Russian brigades, the complex is part of the battery of command and control and artillery reconnaissance, which, according to the state, must have 3 of such complex. 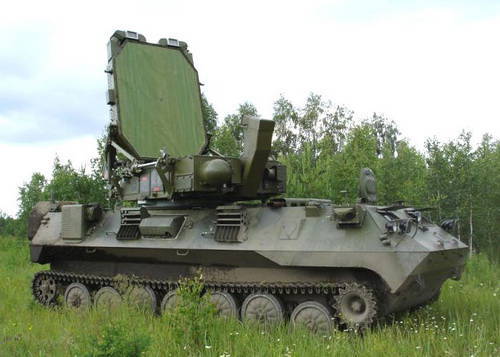 The purpose of the Zoo-1 automated radar complex is to determine the coordinates of enemy fire weapons (leading mortars, artillery guns, multiple rocket launchers, and tactical missile launchers) by firing or firing. Fixing a shot and tracing the trajectory of the projectile / missile, the complex issues target designation to its own fire weapons and controls the effectiveness of their firing.

"Zoo-1" has a sufficiently high survivability, which is achieved by using a short time radar for radiation, the use of countermeasures for unintended and deliberate radio-electronic interference, rapid carrier frequency tuning. Calculation of the complex - human 3 - is protected by anti-bullet and fragmentation armor. 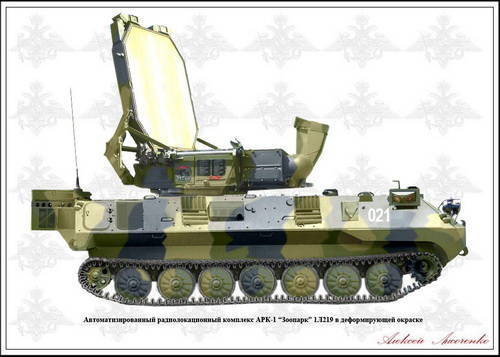 ZLK-1 RLC is located on one transport unit - an armored high-passable tracked tractor MT-LBU. Radar equipment, autonomous means of orientation and navigation, communication devices, input devices and processing of digital terrain maps, as well as power sources, which gives the complex high mobility, are deployed at its base.

The complex includes a radar station 1L259М radar on the basis of the MT-LPP crawler tractor, a maintenance vehicle (MTO) of the complex for 1 and 30 repair and maintenance works based on the Ural-43203 vehicle, an ED30-T230P-1PXPXPXPPP electric power station. PN-1 for carrying out routine and educational work, as well as autonomous means of topographic targeting and orientation.

1Л259М is a 3-x single-axis mono-pulse radar with a phased-array antenna (PAR), which provides combat work with a high-speed digital distribution system - a digital computing system with advanced software. An overview of the area of ​​responsibility in the target search mode or firing control is implemented by the radar station using discrete electric beam scanning in the sector up to 90 degrees in the horizontal and up to 1,8 degrees in the vertical planes with a constant elevation angle of 40 degrees. The radar is able to automatically detect flying mines, shells and rockets, accompany them and conduct trajectory measurements.

Based on the results of these measurements, an assessment of the movement of the projectile flight is carried out, the class of shooting systems is determined, the coordinates of the enemy’s firing positions are calculated with an accuracy sufficient to carry out an effective counter-battery struggle (in the target intelligence mode). It also calculates the points of incidence of own means of destruction (in the control mode). At the same time, the formation and transmission of messages with data on the enemy’s firing positions, as well as the results of firing of their own weapons at the command post of automated missile systems and artillery battalion, is carried out. 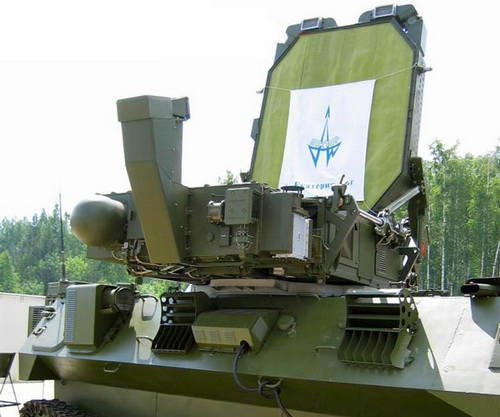 1L259M radar
The 1L259M radar contains autonomous means of topographic location, orientation and navigation, which provide, while driving or stationary, the definition of the azimuth and coordinates of the station location in a single coordinate system. The radar is equipped with an interface to work in the command and control system.

The CWS of this complex provides high automation of the whole process of combat work and allows detecting and tracking simultaneously up to 12 targets, as well as revealing the coordinates of enemy firing positions from which simultaneous, intense fire is fired.

MTO based on the "Ural" is designed to perform repair and maintenance work aimed at maintaining radar equipment in combat condition and has all the necessary equipment for this.

The power supply of the complex is carried out using a mobile power station EDZO-T230P-1RPM with a power of 30 kW (during the calculation exercise and maintenance work) or from a generator that takes power from the propulsion engine (under the conditions of the complex’s combat operation).

The time of deployment and collapse of the RLC without leaving the crew takes no more than 5 minutes.
Driving speed over land - up to 60 km / h.
The complex is able to overcome water obstacles by swimming.
The complex has a cross on the roads of any type.
The power reserve with full refueling is 500 km.
The complex is able to work at altitudes up to 3000 m. Above sea level
Work at influence of all types of an atmospheric precipitation, dust and strong wind to 30 m / s is possible.
Work at ambient temperatures from -45 to + 50 degrees Celsius.
The possibility of transportation by all modes of transport: rail, air, road, water.
Autonomous toporavizka and orientation.

From small arms weapons and shell fragments
From the defeat of bacteriological and chemical weapons.
From exposure to low and high ambient temperatures.

Full automation radar control.
Ensuring comfortable conditions for the crew (ventilation, heating, air conditioning).
Built-in automated control of the complex.
The complex is transferred from the marching position to the combat position and vice versa without leaving the settlement of MT-LBu.
Power autonomy. 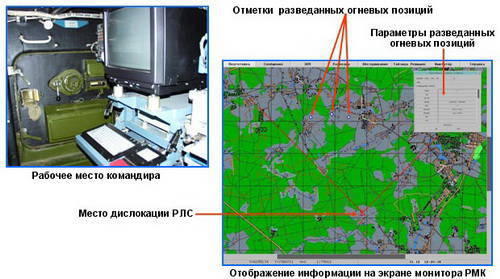 In the "Intelligence" mode, the coordinates of the firing positions of the shooting artillery systems of the enemy are determined. The product sequentially scans the space above the terrain, overlapping the sector width 90 degrees. In this case, the probe beam, carrying out electronic scanning over the masking surface, forms the so-called “potential search barrier”.

At the time the projectile crosses the specified barrier, it is detected, captured and accompanied, followed by extrapolating the trajectory to the point of departure of the projectile.

In the “Control” mode, the coordinates of the points of falling of the shells of their shooting means are determined. According to the initial data entered into the computing control unit (WUU), the coordinates of the points of the beginning of the tracking of shells, the appearance of which is carried out in the working sector, are calculated. VUU sets the probe beam in the direction of the proposed meeting point and organizes an electronic search for the expected projectile. When a projectile is detected in the zone of the meeting point, it is captured, accompanied and extrapolated to the point of its fall.

In the “Functional control” mode, the complex equipment is diagnosed (up to the module of the lowest level) using a digital computing control device (CCD). "Functional control" is carried out both before the start and in the process of combat work.