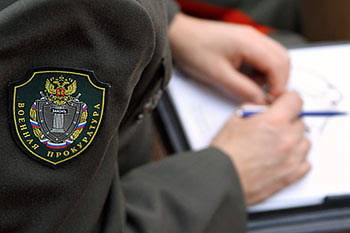 
According to him, most often the military receive timelines for fraud, misappropriation and embezzlement of property, official forgery, abuse and abuse of office, as well as receiving and giving a bribe and commercial bribery.
Harutyunyan admitted that "corruption penetrates into the higher military authorities, and even into the central apparatus of the military department, whose officials themselves should be engaged in curbing this evil."
The Ministry of Defense of Russia charged more than 153 million rubles from the convicts in compensation.

The military procurator with a certain frequency talk about his fight against corruption in the Russian army. According to similar public “reports,” the past few years, the number of corruption cases has been growing in multiples.
Back in the beginning of 2011, the Russian president admitted that his campaign against corruption had not brought results, but recalled that such changes could not happen quickly.

Thus, the Balashikha Garrison Military Court sentenced Lieutenant Colonel Andrei Kaseyev, the deputy head of a military warehouse, to 3,5 years of imprisonment for having stolen foodstuffs for 37 million rubles from a warehouse.

Major-General Valery Znakhurko, head of the Directorate of the Main Missile-Artillery Directorate of the Ministry of Defense of Russia, bought 14 thousand body armor without testing.
The prosecutor's office claims that body armor "were obviously unsuitable for use in combat," because "they easily penetrated the rifle weapons and splinters. "

The former 62 chief of the orders and supplies department of the logistics services of the Russian Defense Ministry, Colonel Nikolai Chekulaev, will have to pay a fine of 29 million rubles, which is more than a sane bribe in 70.
The Russian service BBC repeatedly wrote about cases of corruption in the army.

In March of this year, the East-Siberian District Military Court sentenced the former chief of the automobile service of the Siberian Military District, Major-General Alexander Stetsurin, to nine years in a high-security penal colony.
The general was obliged to pay a fine, deprived of titles and state awards for the fact that in 2009, the general wrote off and "handed over about four million rubles to motor vehicles from warehouses."

In the same month, the former commander of the Plesetsk cosmodrome, and then the head of the main educational department of the Ministry of Defense, Anatoly Bashlakov, was sentenced to seven years in prison for taking a bribe of 700 thousand rubles.

Against the former deputy commander of the Special Forces Command for the rear, Vyacheslav Dvurechensky, who is already serving a term on fraud charges, another criminal case has been initiated - on suspicion of embezzling more than 60 million rubles.

Then the expert of Nezavisimaya Gazeta, Vladimir Mukhin, told bbcrussian.com that he was not surprised by the large number of cases against the generals.

“The majority surrounded by the Minister of Defense are people from fiscal bodies who know how to do an audit and ensure that funds are properly spent,” Mukhin explained.

And Novaya Gazeta military observer Pavel Felgengauer said that the reason for the large number of corruption cases against senior military officials is unknown, "because we don’t know how much it costs to purchase, and because the expenses and the distribution of money are classified."

We are in Yandex Zen
Missed chapter "Strategy-2020"
Independent expert report "Putin. Corruption"
7 comments
Information
Dear reader, to leave comments on the publication, you must to register.