Azerbaijan at a dead end: devaluation, failure of TANAP and recognition of the Armenian Genocide 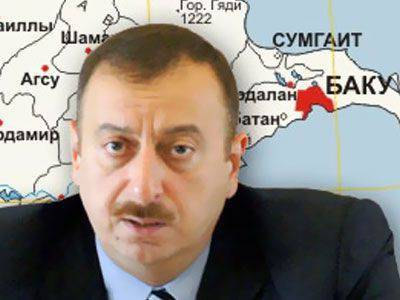 Azerbaijan is going through one of the most difficult stages in its newest stories. It all started when the Central Bank made 21 in February devaluation of manat by 35,5%, setting the official exchange rate of the national currency at 1,05 manat for $ 1, instead of the former rate in 0,78 manat for $ 1. The drama of the situation was that several days before that, President Ilham Aliyev loudly assured all citizens that no devaluation was planned. Three days after the devaluation, the president called this step deliberate and necessary, which for many has become monstrous. Overnight, depositors of Azerbaijani banks lost $ 1 billion. The average monthly salary was officially announced 442 manat ($ 560), and then became equal to $ 420. 30% has devalued pensions, salaries and scholarships.

Moreover, since the beginning of 2015, the currency reserves of the Central Bank have decreased by $ 4,29 billion (31,2%) and as of March 31 amounted to $ 9,47 billion, reports Trend. Local experts believe that if the Central Bank’s participation in strengthening the national currency continues at this pace, by the end of 2015, all its reserves may be exhausted. But this is only one side of the coin. The other side is that the gold and foreign exchange reserves of Azerbaijan, which, according to some data, amount to $ 50 billion, are mainly stored in Western banks. And now, under various pretexts, they refuse to give them to Azerbaijan. This gives grounds for some experts to assume that the West is preparing a “monetary revolution” in Azerbaijan, meaning that all this can lead to a social explosion throughout the country, where, according to the politician Erkin Gedirli, “power from top to bottom is based on financial support ". “There is no ideology, rule of law, judicial authority as such. The only thing on which loyalty of citizens rests is money. The government has won over all these years the loyalty of citizens. Now, when money becomes less, it is difficult to continue in this spirit, and over the years it will become impossible in general, ”Gadirli believes.

Overnight, the authorities' myth about the “analogous development” of Azerbaijan collapsed. In recent months, I remember a number of I. Aliyev’s trips to European countries, where he, having “the greatest number of gas trumps” amid deteriorating relations between the West and Russia, tirelessly assured everyone that “Azerbaijan is able to become the only alternative for Europe to provide gas ". At the same time, the Azerbaijani side verbally, although it asserted that Baku is not going to compete with Moscow in this direction, in fact, on the sly, did everything to ensure that Europe chooses the Azerbaijani TANAP pipeline, and not the South Stream gas pipeline. Recall that the supply of TANAP (project cost - $ 10-11 billion) at the first stage will be 16 billion cubic meters, of which 10 billion is intended for Europe, and 6 billion - for Turkey. In the future, it is possible to increase the capacity of the pipe to 31 billion cubic meters. Commissioning of the gas pipeline is scheduled for the middle of 2018, and after the completion of the construction of the Trans-Adriatic Gas Pipeline (TAP), approximately at the beginning of 2020, gas will also be supplied to Europe. According to the partnership agreement signed by 13 in March, 58% share in the consortium belongs to SOCAR (Azerbaijan), 30% Turkish “Botash” and 12% British BP. It was assumed that, for the first time, only Azerbaijani gas would be pumped through TANAP, but at the same time the issue of Turkmenistan’s participation in it, and even, according to some Baku media, Iran was discussed. On March 17, a solemn TANAP groundbreaking ceremony was held in Kars, Turkey with the participation of the heads of Azerbaijan, Georgia and Turkey.

After that, not entirely clear things happened that made the experts change their views on the TANAP perspective. The first blow came from the Turkish Minister Taner Yildiz, who said that "in the case of a profitable commercial offer, Turkey may sell shares in the TANAP project." Note that this statement was made two days after the visit of Turkish President Recep Erdogan to Tehran. It forced some observers to speak about a new strategic energy alliance of Russia, Turkey and Iran. Such opinions were further strengthened after the signing of the well-known agreement of the “six” with Iran in Lausanne, and the subsequent decision of Vladimir Putin to lift the ban on the supply of the C-300 missile system to Iran. Against the background of the changing priorities of Turkey in the choice of partners and the deepening economic and financial crisis in Azerbaijan itself, some Baku analysts have already begun to doubt that I. Aliyev will achieve his goal in this direction. Especially since the country's poorly depleted budget is unlikely to withstand such a burden. And some in Baku, at last, recalled that the “brotherly” “Muslim people” lived in Iran.

As they say, trouble never comes alone. Following this, events occurred that literally put all of Azerbaijani society into an apocalyptic shock. Recall that April 12 held a traditional mass in memory of Christians who became victims of the genocide in the Ottoman Empire in the period from 1915 to 1923 in the Vatican. In his speech, Pope Francis assessed these events not only as the Armenian genocide, but also the genocide of all Christians - both Orthodox and Catholics. In addition to 1,5 million Armenians, in those years almost 1,4 million Greeks, 800 thousand Assyrians, 500 thousand Yezidis and 200 thousand Molokans were killed. At the same time, the liturgy itself took place according to the so-called “Armenian rite”, where the highest hierarchs of the Armenian church were present. And on April 15, the European Parliament (EP) adopted a resolution stating that "the tragic events that took place in 1915-1917 against Armenians in the territory of the Ottoman Empire are genocide." The resolution calls on Turkey "to use the commemorative events on the occasion of the centenary of the Armenian Genocide, to reconcile with its past, recognize the Armenian Genocide and thus, pave the way for genuine reconciliation between the Turkish and Armenian peoples."

Turkey’s reaction to these events was harsh, which in some sense is even understandable. But what is happening in this connection in Azerbaijan is an obvious stir. All socio-political forces of the country, ranging from members of parliament to opposition politicians and analysts, turned against the Pope of Rome and the European Parliament. As if having forgotten how enthusiastically the recent visit of I. Aliyev to the Vatican was received in Baku, during which the importance of various cultural projects implemented by the G. Aliyev Foundation was emphasized. All fell on the pontiff. He was accused of being a "descendant of criminal conquistadors," and the president was reminded of the restored Vatican catacombs, of the expensive gifts that were presented to Francis. As for the EP resolution, MP Ganira Pashayeva said that this decision, "based on lies, will never be taken by any Turk." According to her, "the whole Turkish world must rebel against this slander."

All this you can write for a long time that is not included in the plans of the author. The leadership of Azerbaijan has not been able to develop a more or less correct strategy in the matter of choosing allies, to create a coherent foreign policy platform. The country is at an impasse.