5 May 2015
1
If we compare the countries of the First World War from different military-political blocs, the comparison of Austria-Hungary with the Russian Empire suggests itself. In some respects, the Ottoman Empire can be recorded in the same camp. All three empires were great continental powers that united dozens of nationalities and needed social and economic modernization. Like Russia, Austria-Hungary and the Ottoman Empire burdened domestic political problems, among which were social and national. However, if in the Russian Empire the social issue was more acute, in the Austro-Hungarian and Ottoman empires the national problem was the main one. In Austria-Hungary, the titular nations (Germans-Austrians and Hungarians) did not even make up half of the total population. The national question became for Austria-Hungary and the Ottoman Empire a “mine”, which crushed two powers, all that was needed was a “fuse”, which was the First World War. External forces interested in the collapse of old empires, actively used the national map to their advantage.

A big role on the national question in Austria-Hungary (as well as in Turkey) was exerted by the situation on the Balkan Peninsula. Greeks, Serbs, Montenegrins and Bulgarians gained independence, re-created states. This was a prerequisite for the development of relevant trends in the territory of Austria-Hungary and the Ottoman Empire. Russia had its own interests in the Balkans. Serbia has become the main stumbling block in the Balkans. Russia and Serbia had special relations, the Serbs were the closest to the Russians in terms of their mentality. At the same time, the Serbian kingdom, which successfully withstood the two Balkan Wars of the 1912-1913, created enormous problems for the Austro-Hungarian Empire. The Serbian elite bore plans for the construction of "Greater Serbia" at the expense of the Slavic possessions of Austria-Hungary (these plans secretly supported external forces that hoped to set Europe on fire). In Serbia, they hoped to unite all South Slavic peoples.

For the Austro-Hungarian Empire, the implementation of such plans was a disaster. In addition, Serbia was an economic rival, undermining Hungary’s agriculture. Determined Belgrade gave support to St. Petersburg. All this annoyed the Austro-Hungarian elite, most of whom were increasingly inclined to solve the problem by force. Many in Austria-Hungary wanted to start a preventive war, not to wait for the South Slavic peoples to rise, to defeat Serbia. Militarily, the Austro-Hungarian empire was much stronger than Serbia, and if the war could have been located on one Balkan front, Vienna hoped to achieve quick success. According to the Austro-Hungarian elite, this victory was supposed to eliminate the threat to the integrity of the empire and return the position of leader in the Balkan region.

The decline of the empire. Army

The traditional supports of the house of the Habsburgs were the army and the bureaucracy. The army was the "favorite toy" of the monarch. However, the army gradually lost its former unity. The national composition of the "imperial and royal army" was becoming more colorful. At the turn of the XIX-XX centuries, the 102 infantry regiments in the 35 army were Slavic, the 12 were German, the 12 were Hungarian, the 3 were Romanian, and the rest were of mixed composition. Austrian (Landwehr) and Hungarian (Honveda) territorial armed groups existed as separate types of land forces, as well as militia (landsturm), which was called for during general mobilization. By the beginning of the 20th century, 29% were Germans, 18% were Hungarians, 15% were Czechs, 10% were southern Slavs, 9% were Poles, 8% were Russian, and 5% were Slovaks and Romanians and 1% were Italians . At the same time, among the officers, the Germans and Hungarians prevailed, and among the Slavs there were mainly Poles, Croats and Czechs, the rest were few.

In the all-imperial army, there were “fuses” against friction between representatives of different nationalities. So, if in a particular regiment representatives of a particular nationality made up more than 20% of the personnel of a unit, their language was recognized as a regimental language and his knowledge (at a level that is necessary for normal service) was recognized as mandatory for officers and non-commissioned officers. The command language for all types of troops, except for the Hungarian Honored, was German. Every soldier, not to mention officers, should have known German at least at the level of basic commands and military terms. German was also the official language of the army, correspondence was conducted on it, it was used by military courts, logistical and economic services, etc. The emperor was the commander-in-chief of the armed forces. In fact, initially the army in Austria-Hungary was a supranational structure, based on Germanism. The main defender of this principle was the emperor. Allocation of national units in the army led to the general degradation and destruction of the empire building. 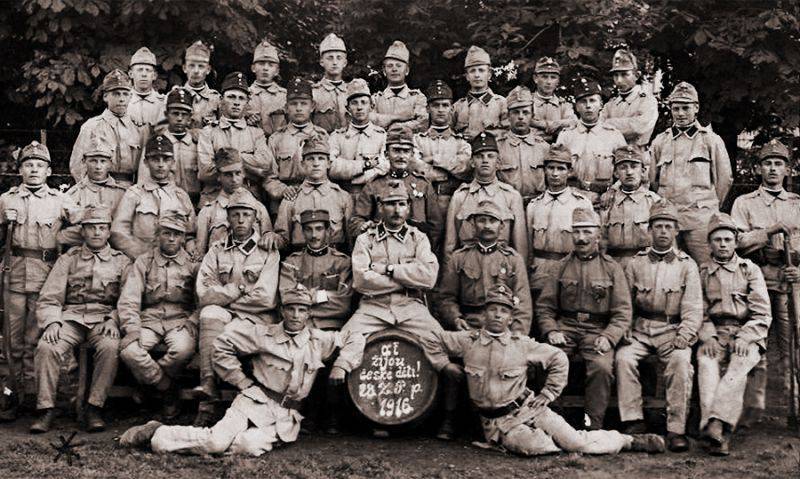 Soldiers of the 28 (Czech) Infantry Regiment

By the beginning of the First World War, the processes of depriving the unity of the army gradually gained momentum. The democratization of the army officer corps intensified this process. The aristocracy gradually lost its leading position in the army and the state apparatus. So, in 1880-1910. the share of majors in the general army, who had a noble title, decreased from 37,7% to 18,2%, lieutenant colonels - from 38,7% to 26,8%, colonels - from 46,7% to 27%. If in 1859, the nobles were the 90% of the Austrian generals, by the end of the First World War - only every fourth general. Although, on the whole, the military elite remained loyal to the throne, but gradually nationalist and democratic sentiments penetrated the stronghold of the empire.

This was especially pronounced after the 1914 campaign of the year, when, after a series of unsuccessful battles that led to the mass death of the army cadre, and general mobilization at the front, reservists — yesterday’s teachers, teachers, doctors, lawyers, shopkeepers, and etc. By October 1 1918, out of 188, thousands of Austrian and Hungarian officers, only 35 thousands were professional soldiers. This led to a sharp increase in nationalist and democratic sentiment in the army. We can see a similar situation in the Russian Empire, where the death of the core of the regular army on the battlefields of the First World War predetermined the death of the empire and the fall of the Romanov dynasty. The army of the stabilizing factor, which stopped the destructive tendencies, itself became a factor of general destabilization.

Army recruited conscription. The conscription age in the general army was 21 year. The term of service was: a) for 3 years of service, drafted into the all-imperial army, 7 years in the reserve army, 2 years in the reserve of landwehr, b) for service years called up for 2, and 10 years in the reserve of landwehr. In numerical and qualitative terms, the Austro-Hungarian army was seriously inferior to the French, German and Russian armies. However, it clearly had an advantage over the armies of Italy, the Ottoman Empire and the Balkan states. In the 1902 year, the 31 infantry and 5 cavalry divisions were divided into 15 corps (mostly two infantry divisions each) dispersed throughout the empire. Thus, the 1 body was located in Krakow, the 2 body was in Vienna, the 3 body was in Graz, the 4 body was in Budapest, etc.

The number of army in peacetime in 1905 was 20,5 thousand officers, about 337 thousand lower ranks with 65 thousand horses and 1048 guns. Then 3,7 million people were liable for military service, but only about a third had satisfactory military training. This was a weakness of the Austro-Hungarian army, which had a small trained reserve and was not ready for a long war. For example, the German Empire already in 1905 had more than 4 million trained military serviceers.

A big problem was the technical security of the army. The troops lacked new types weapons. The budget expenditures on the army clearly did not correspond to the military-political situation in Europe and especially in the Balkans. The military expenditures of Austria-Hungary in 1906 amounted to 431 million German marks, France in the same year spent 940 million marks for military needs, Germany - about 1 billion marks, Russia - more than 1 billion marks.

Before 1906, the armed forces were headed by Friedrich von Beck-Rzhikovsky. Beck was chief of the General Staff of the Austro-Hungarian armed forces from 1881. Unofficially, Beck was called "Vice Kaiser" under Franz Joseph in the area of ​​defense policy, as he concentrated in the General Staff leadership of the armed forces. Beck was a cautious leader who balanced between the progressive liberal current and the conservative camp. The new head of the General Staff was Franz Konrad von Höttsendorf (Götsendorf), who was the soul of the “party of hawks”. Hettsendorf played a large role in the fact that Austria-Hungary launched a big war in Europe. As the head of the “war party”, he advocated the revitalization of Vienna’s foreign policy, the unleashing of a preventive war with Serbia and Montenegro, and hegemony in Albania. Not trusting Italy (she was then part of the Triple Alliance), he called for strengthening the Austro-Italian border. Hettsendorf vigorously developed and re-armed the army, strengthened the artillery (especially heavy). 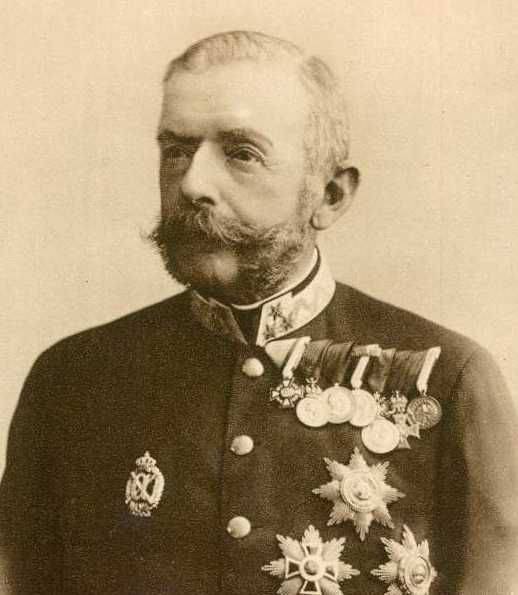 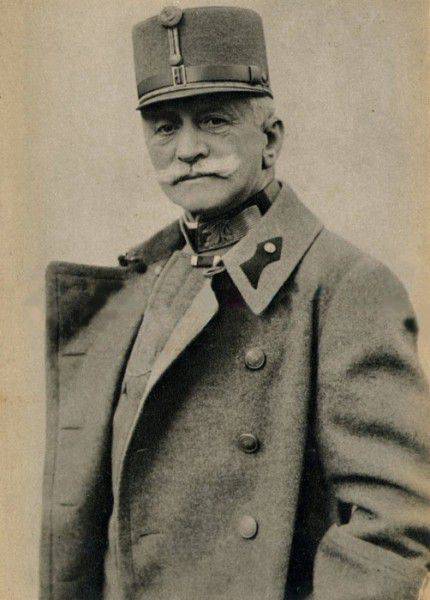 Hötzendorf was literally obsessed with a preventive war against Serbia or Italy, and preferably against both at once. One day during a conversation with Emperor Franz Joseph, in response to the warlike thoughts of the Chief of General Staff, the monarch said that “Austria never started the war first” (obviously having sinned against historical truth), Conrad replied: "Alas, Your Majesty!" Thanks to the efforts of the chief of the General Staff and heir to the throne, Archduke Franz Ferdinand, who was deputy emperor in the high command of the army (he also did not like the Serbs, but was opposed to a preventive war, holding back the "hawks"), the imperial army in 1906-1914. made a big step forward in the field of technical equipment and combat training of troops. According to the law of 1912, the size of the regular army in wartime increased from 900 thousand to 1,5 million soldiers and officers (not counting the territorial armed forces, reserve units, and land-assault militias). Military spending has risen markedly; programs for the construction of new fortifications and rearmament have been approved fleet and combat development aviation.

It is worth noting another feature of the army of Austria-Hungary. The all-imperial army no longer fought for nearly half a century. After defeating the Austro-Prussian 1866 war of the year, the Austrians did not fight. The operation in Bosnia in 1878 had a local character and did not add combat experience. The lack of combat experience and military victories could not but affect the moral and psychological state of the imperial army. It was not for nothing that the Archduke Franz Ferdinand believed that, despite the overall impressiveness of the Austro-Hungarian army, she was incapable of prolonged hostilities with a strong enemy. Konrad von Hoettsendorf thought otherwise. The heir to the throne and the chief of the General Staff argued on this issue. As a result, the war showed that Franz Ferdinand’s assessment was correct.

The Austro-Hungarian army was good at the parades, it threatened the neighbors, cemented the unity of the empire, but long-term hostilities affected it in the most negative way. The Hapsburg military did not fight for a long time and did not win, which affected their fighting spirit. The officers and soldiers of the all-imperial army were not cowards, but the army, which had forgotten the taste of victory, was at a disadvantage when confronted with the enemy. The weak point of the Austro-Hungarian army (as well as the Russian) was the generals, who lacked the necessary military aggressiveness (activity), determination and initiative. The generals of "peacetime" did not know how to fight.

Author:
Alexander Samsonov
Articles from this series:
Austria-Hungary in the First World War