April 19 2015
77
Under the next shelling came the representatives of the OSCE monitoring group in the Donbass. This time the shelling of the mission’s vehicles took place in the area of ​​the settlement of Shyrokyne. Shooting was conducted from the territories occupied by the militants of the Ukrainian Nazi battalion "Azov", in which several dozen foreign citizens are fighting. And it was opened at the very moment when the cars with the symbols of the organization appeared in the village. In response, they began to shoot from the positions of the militia in order to suppress the fire. As a result of the shelling among the representatives of the OSCE mission there are no dead.

According to the deputy head of the OSCE monitoring group, Alexander Hug, representatives of the group were forced to urgently leave the village Shyrokyne.

Ukrainian media reported that the Azov regiment had lost at least one foreign mercenary. It turned out to be a certain George Dzhanelidze (call sign "Satan"), who arrived to fight on the side of the Ukrainian Nazis from Georgia. Initially, it was reported that he died as a result of shelling of Azov positions by militias. However, then the Azov militants themselves spread details on social networks, stating that they themselves “attacked the checkpoint of the terrorists (militiamen - note“ IN ”) and suffered losses”.

This statement of the “Azovtsevs” once again speaks about exactly who carries out provocative attacks in the Shirokino area.

It should be noted that the militants of “Azov” declare that they are not going to leave Shyrokyne, creating a demilitarized zone, since this could allegedly threaten Mariupol.

An interesting photo from the page of "Azov" (one of the "heroes" in the photo from the Middle East is the Georgians with the call sign "Jadot Koldun", marked by the killings of civilians in the Donbass): 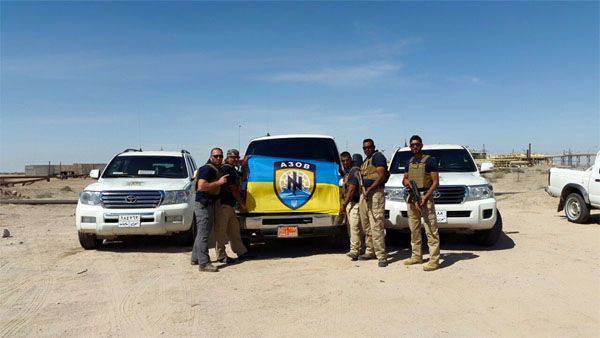