Peter I and the Eastern Question. On the Z00 anniversary of the translation of the Quran into Russian 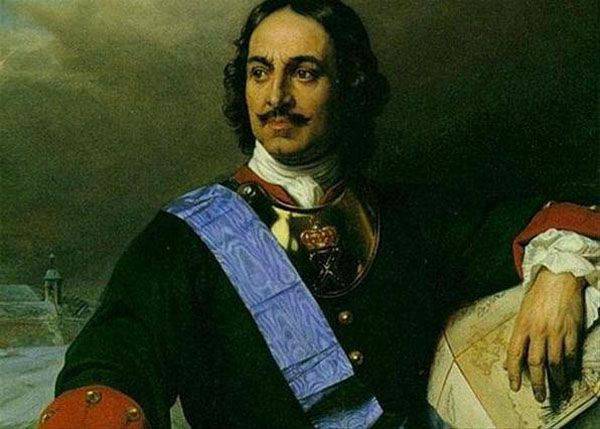 The years of the reign of Emperor Peter I became a time when more or less systematic study of the Muslim East, translation and study of the Koran began in the stream of the eastern policy of Russia. By order of Peter I in 1715, the first translation of the Quran into Russian from the French translation of Andre du Rie was made. In 1716, it was published in St. Petersburg under the name “Alcoran on Mahomet, or Turkish Law”. Who exactly did the translation, it is not known exactly, authorship was attributed to both Peter Posnikov and Dmitry Cantemir.

The original feature of the XVIII century - the speed of change, occurring mainly from above, from the height of the imperial throne. Peter's reform divides Russia into two parts. The first - the nobles, the second - all the rest. A common language between those and those in the literal sense of the word, and figuratively, is lost. The nobility suddenly began to speak French, leaving the Russian niello. In some ways, it was a betrayal of one’s language, one’s culture, one’s people, but one’s betrayal wasn’t definitive, “Frenchization” wasn’t irrevocable - it’s not betraying one’s spirit and faith, because bilingualism didn’t lead to the loss of one’s native language and in essence, the nobles did not speak the language, they remained Russian in psychology and mentality. Although…

An unexpected consequence of this half-hearted betrayal was the appearance of the type of “a penitent nobleman,” but also, “as it were, a penitent,” but not quite ... Enlightenment and slavery in the Petrine era are so far apart from each other that they do not seem to interfere with each other . Academy and poll tax, schools and recruiters, calendars, grammar, textbooks, translations and the landowner's right to refer peasants to Siberia, the executioner's pride for the ability to kill the ridge with one blow of the whip ... Civilization and slavery - all in one coil, all in one life, in one of life. Everything is intertwined. Russia…

The editions of the Petrine era come out in huge editions, in a hundred years they will be printed ten times less. So much so that many of the books will rot in the stalls, even if a tiny fraction of them find the reader, the publication is already justified! Petrovsky education is either carried out by force, or lured to knowledge, as in a kunstkamera (according to the kunstkamera charter, each visitor is poured a glass of vodka - if only he came in!). Be that as it may, the number of manufactories during the reign of Peter grew seven times. With its production of 10 and millions of poods of pig iron every year, Russia comes to the first place in the world by the end of the 18th century. The Russian cart, chased by a skillful whip, rushes faster than an English steam train!

There is a general growth of culture. Through the window cut by Peter, the air went simultaneously to life and acrid at the same time. Russia takes lessons from Voltaire. Educated people become capable of merciless introspection. However, new knowledge and impressions come not only from Europe, but also from the East. There is a desire to compare oneself with a relatively close neighbor, and with a distant obscure soul.

Peter becomes the first of the Russian sovereigns, who study peers at Muslim faces, trying to comprehend an unfamiliar cultural image, the foundations of foreign and in many ways alien morality and faith. This desire is at first indistinct, but it is growing. 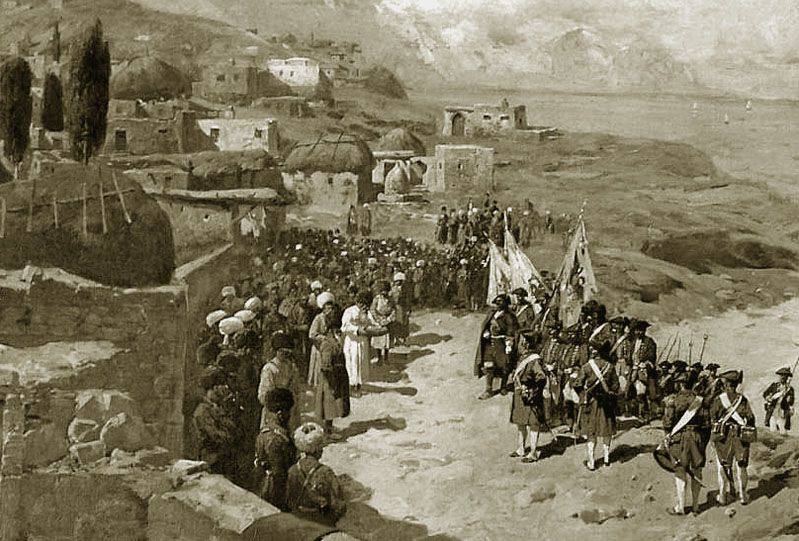 It is the wars with Muslim Turkey that make us watch the enemy closely. With small discoveries begins a thoughtful peering of Russian education into the people of Islam. The sources of information are initially vague. These are translations from Greek, Latin and Polish languages ​​of religious treatises and historical chronicles. All of them, without exception, contain distorted information about Islam, the Koran and the Prophet Muhammad, but it is these fables that fill the historical works in Russian.

It must be said, the first essay, specially dedicated to the Qur'an, was published in Russia as early as 1683. In Chernigov, the Alkoran Macometov ... treatise on Polish princes John and Peter, the future Russian emperor, was compiled in Polish by the rector of the Kiev-Mohyla Collegium, Ioannik Galyatovsky. Russian translation is made by the Ambassadorial order. The book does not contain genuine Quranic quotations, shows the author’s complete unfamiliarity with the contents of the Koran.

However, on the basis of fantasies and conjectures, and they are obvious to Peter and his entourage, it is impossible to make government decisions, it is impossible to build long-term relations with the Eastern world. And then on the orders of the king begins collecting information about Muslim antiquities. 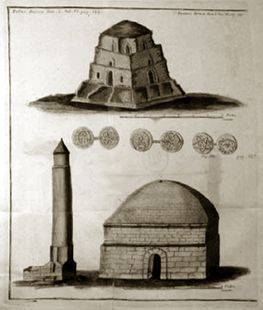 Mosque, minaret and mausoleum in the ancient Bulgar. From the book of P.S. Pallas “Journey to different provinces of the Russian empire”, 1773

In the 1712 year, by special decree of the king in the Volga region, where the ruins of the ancient Bulgar stand and where Islam was adopted by its rulers (see "Embassy in the country of Turks, Bulgars and Rus"), traveling clerk Andrei Mikhailov. He will have to allocate land for the Orthodox Assumption Monastery, as well as explore the ancient Bulgar, the foundations and the remains of buildings. Diak reports that the place is still Tsar Fedor Alekseevich was loved and revered. Having studied the documents, Tsar Peter decides that His Grace Josaph, an employee of Kazan, should henceforth be called the Metropolitan of Kazan and Bulgar, and during the Persian campaign, the Tsar personally visits and inspects the remains of the ancient city. Later, from Astrakhan, Peter I sends a decree to the Kazan governor on the restoration of the buildings of Bulgar, and the castle site itself needs to be carefully examined, and the antiquities studied and described. 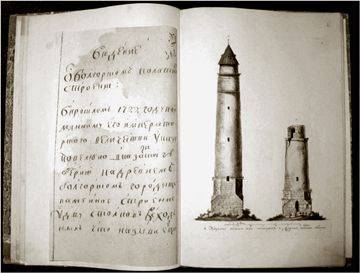 Architectural drawings of the ruins of the ancient Bulgars. Removed from life in 1827. Architect A. Shmitov

Information on the restoration of the monuments is preserved in the papers of the Cabinet of Peter I, in a note entitled “Management of the Bulgarian Bulgarian Building”. By imperial decree, Lieutenant Colonel of the Kazan garrison regiment Nikon Savenkov and geodesist Ivan Krapivin were sent to Bulgar, who measured and described the site of ancient settlement. Through translators, local abyz and mullahs were surveyed, legends were collected about what had been in the place of the Bulgarian fortified settlement before. It became known that the “stone castle” inside Zamoshny Val was previously a mosque. The main "tagged attribute" - the minaret - "the pillar of the high, one of the Cossacks of the Munar." Here, nearby, two old Muslim cemeteries, separately for men and for women.

Thanks to the investigations undertaken by order of Peter, the contents of the inscriptions on the tombstones, which at that time were available for reading (many are lost today), have reached us. Soon, under the supervision of Commissioner Mikhail Molostov, excavations began on the site. “Judicial mirror with Arabic signature”, “silver Arab kopecks”, “two gold rings”, “gold plaque with a string” and “Persian earthenware jug about two pens” were found.

These were the first in Russian history targeted archaeological research of Muslim antiquities.

In St. Petersburg, in 1716, the first translation of the Quran into Russian was printed, made not from the Arabic original, but from the French translation by Andre du Rie, about which the historian PP Pekarsky gives the following information: “The Frenchman Du Rie, who had been a consul in Egypt for some time, learned the Arabic language and translated it into French. Alcoran, but not quite right. " The full name is “Alcoran about Mahomet or Turkish law translated from French into Russian. Printed by the command of Tsarskogo Majesty in the St. Petersburg Printing House 1716, in the Month of December. ” 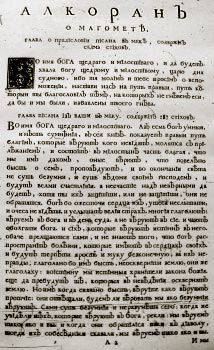 The first page of the book "Alcoran about Mahomet, or the Turkish Law"

The translation was probably published in connection with the preparation for the Persian campaign, since it coincides in time with the work of the expeditions of Prince Alexander Bekovich-Cherkassky to explore the Caspian Sea in 1714-1715. The translator into Russian is unknown, most likely it is Peter Vasilyevich Postnikov, but there is no consensus of opinion both by authorship and the time of translation. Perhaps the translation was made earlier than 1715 of the year. The translator's knowledge of French is not deep - he not only repeats, but also multiplies the mistakes of du Riet.

After a few years, Du Rie's work is being translated into Russian again, but more carefully. The work was performed, as historians suggest, Peter Postnikov is a Russian diplomatic agent in Paris, a doctor at the University of Padua. But this work also explains little in Muslim customs and practices. There is no confidence in this book among the sovereign’s entourage, but the subject deserves to be looked into. Peter I orders another translation of the Koran to his comrade-in-arms, the Moldavian prince Dmitry Cantemir. In his youth, Cantemir spent several years in Turkey (was a hostage), is familiar with the local order, knows a little eastern languages. Peter instructs him to set out in detail the contents of the Qur'an and to compile a life story of the Prophet Muhammad.

Peter I’s attempt to build a new city on the Caspian Sea coast, Astrabad, a place to trade with Bukhara, India and other Eastern countries, ended in failure. An expedition sent for this purpose in the 1716 year was looted by Khivans. Its commander, captain of the Life Guard regiment of the Preobrazhensky regiment, Prince Alexander Bekovich-Cherkassky, was beheaded. The Khiva Khan sent Bekovich’s head as a gift to the Bukhara Khan, and the death of the prince became a saying (“disappeared as Bekovich”).