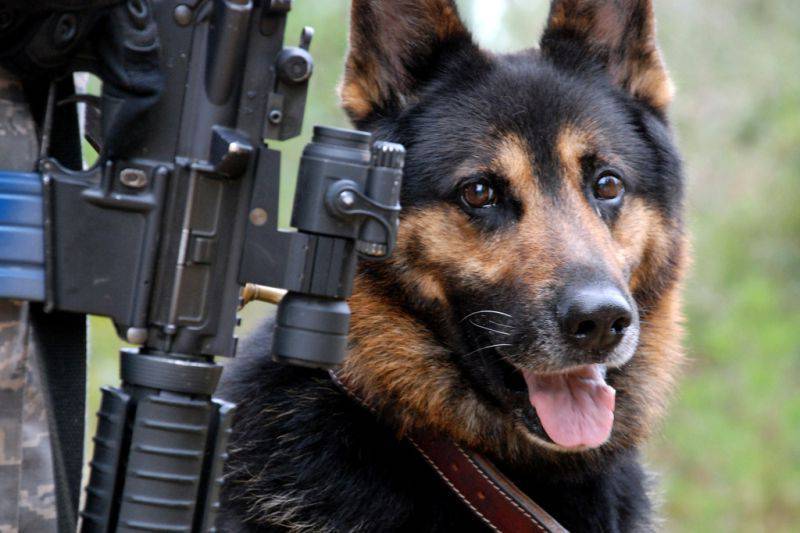 The dog is not only a true friend of people, but also one of the most perfect species. weapons. For many centuries and even millennia, people use this animal as a reliable assistant in battle. In the modern army, military dogs do not break through the camp of the enemy and do not rush under Tanks, but even now in many military units it is impossible to do without a sharp eye and the scent of a dog.

So, for example, in the modern border detachment it is practically impossible to do without these animals. At the same time, dogs began to be used relatively recently for this purpose. By the decree of Tsar Alexander III, the transition was made from customs to special troops. In particular, the document stated that the presence of dogs at the border service would not only facilitate the detection of the approach of smugglers, but also help them quickly find their tracks.

In 1908, the St. Petersburg police also began using service dogs in their service.

During the First World War, these animals were actively used by all the opposing sides as medical orderlies, signalmen and watchmen. And the reason for this was extremely simple: from the very beginning of the fighting, almost the entire front line was blocked by minefields and wire obstacles, so conducting reconnaissance raids became extremely dangerous for life.

Historians claim that the Austrian-Hungarian and German armies were the first to use dogs during the war: guard rottweilers and shepherds, sensing an enemy approaching the trench line, raised the alarm. In addition to the functions of guards, the dogs served as a cohesive.

In April, the 1915 of the Year in Lviv established the School of Military Guard and Sanitary Dogs, which was headed by State Councilor Lebedev, who had previously trained police dogs. With the beginning of the offensive of the German-Austrian troops, the school had to be evacuated to Kiev. The staff consisted of 8 instructors and more than 100 lower ranks. The school was engaged in training not only police dogs, but also those animals that were voluntarily handed over to civilians. By September 97 here there were four-legged pets, including 21 belonged to the breed of Belgian shepherds, 37 - were average European Shepherds and Dobermans 12, 19 Airedales, German and Austrian 5 captured shepherds and beagles 3.

The further development of the Soviet service dog breeding is also connected with the name of the canine scientist V. Yazykov, who in 1919 year applied to the Headquarters of the Red Army with a proposal to organize military dog ​​breeding. But it was not until August 1924 in the Red Army that a special organization of military dog ​​breeding was created, which is considered to be the initial page in stories Soviet military cynology. The school nursery was organized at the Higher Shooting and Tactical School "Shot", and N. Yevtushenko was put in charge of it. The center was named the Red Star. By the beginning of 1941, training of dogs in 11 directions was conducted in the kennel school.

During the war, sled and sanitary dogs brought thousands of tons of ammunition to the front line around 3,5, and about 700 thousands of seriously wounded soldiers were taken out of the battlefield. The mine-searching dogs in the service were about 6 thousand, and they were able to neutralize up to millions of land mines, mines and other explosives. Communication dogs delivered more than 120 thousands of reports and helped lay about 8 thousands of kilometers of telephone wires to establish communications. Tank fighter dogs undermined more than 1300 units of enemy armored vehicles during the war years. Subversive dogs were used to undermine railway bridges and trains. And reconnaissance dogs conducted through the enemy advanced positions of fighters, found hidden firing points, ambushes. Watchdogs worked in ambushes, outposts to detect the enemy in inclement weather and at night.

In addition to the eleven areas of training military service dogs - orderlies, sappers, tank destroyers, reconnaissance men, communications men, messengers, saboteurs, demolition men, escorts, guard, sled and investigative - there was another group of animals - these were dogs that were used specifically for military contact with the enemy, his detention.

Representatives of the latter group were erected a monument in the Cherkassy region in Ukraine several years ago. The tragedy that occurred at the very beginning of World War II was the only confrontation between people and animals in the entire history of armed conflicts and world wars.

Everything happened in the very center of Ukraine, on the border of Kirovograd and Cherkasy regions. Here they were surrounded and almost completely destroyed the 6-I and 12-I armies of the South-Western Front, headed by Generals Ponedelin and Muzychenko. At the beginning of August, there were a total of 130 of thousands of military personnel in two armies, and only 11 of thousands of soldiers and officers went to Green Brama. The rest were either captured or killed.

In a separate battalion of the border guard detachment of the rear of the South-Western Front, created on the basis of the Separate Kolomiya border commandant's office, there were service dogs. Despite the lack of food and the terrible conditions of detention, the battalion commander, Major Lopatin, refused to let the animals go. On July 12, the battalion took its last battle near the village of Legesino. However, the forces were too unequal, because a whole fascist regiment opposed half a thousand Soviet border guards. The commander gave the order, along with the border guards, to send hand-to-hand fighting and 30 service dogs. It was the last reserve. In that terrible battle, all 150 Soviet border guards died.

Later, when the Germans took the bodies of their dead, the people of Legezino were allowed to bury the Soviet soldiers. The bodies of all the dead border guards were gathered in the center of the village, and then buried along with the dogs.

Only in 1955, did the villagers manage to collect the remains of all five hundred dead soldiers and transfer them to the school where the mass grave is now located. And on the site of that terrible hand-to-hand combat of soldiers and dogs with fascist invaders in May 2003, a monument was erected to a man with a gun and a dog. Such a monument is no longer anywhere in the world. It was installed on charitable donations of war veterans, canine scientists and border guards of Ukraine.

I must say that, in total, during the war, about 170 regiments and battalions of various dog breeding services were formed. In general, there were about half a million dogs at the front in the service.

For the training of dogs that participated in hostilities, a special system was developed. The main emphasis in the preparation was placed on the development of special skills: identifying the trace, distrust of strangers, searching by smell. They were taught to navigate the terrain. Resilient, physically strong animals, with a strong sense of affection and loyalty to man, were selected for military service. In determining the suitability of a particular dog for training to a particular type of service, the type of behavior and breed, level of excitability and reaction were taken into account. So, for the protective-guard and investigative services selected dogs with pronounced active-defensive reactions, good eyesight and hearing. For the preparation of mine detectors selected animals with excellent sense of smell and hearing and low levels of excitability.

Modern technology is in many ways able to replace the four-legged friend. In particular, with the help of special detectors it is possible to quickly find explosives, but to detect and detain a criminal, to find a caches of weapons, to search the goods in search of smuggling can only specially trained service military dogs. To do this, they use their nose, which is several hundred times greater than human, and hearing, which is 7 times sharper than in humans.

Military dogs must be diligent, intelligent and hardy. German shepherds, rottweilers, Dobermans and Collies are most suitable for training. At the same time, experts avoid taking light-colored dogs, because they are much easier to notice.

The raising of animals begins at the age of two months. At first, all puppies undergo a general training course, and by the 10 months they begin adult life and special training begins. As a rule, by this time each dog has its own talents, according to which they begin to learn and develop the best qualities.

All military service dogs in the training school are divided into search, combat, guard and breeding. Accordingly, training takes place according to different programs and principles.

One of the most difficult training specializations is the sapper case, since it is the hardest to teach him. Training is considered complete only when the dog is able to find any type of ammunition for complex smell, located at a depth of one and a half meters. In addition, the dog should be able to detect booby traps, streamers.

Service dogs are not aggressive, they love affection and care, but their job is to bite the criminal, attack, look for danger, so you should not joke with them. As a rule, military service dogs serve 7-8 for years, after which they are sent to well-deserved rest. But even after the termination of the service life, dogs live on frontier posts as family members of border guards. All these animals have fulfilled their duty to the state, so they deserved a calm life, care and respect.