Madame "Wow" dreams of a throne 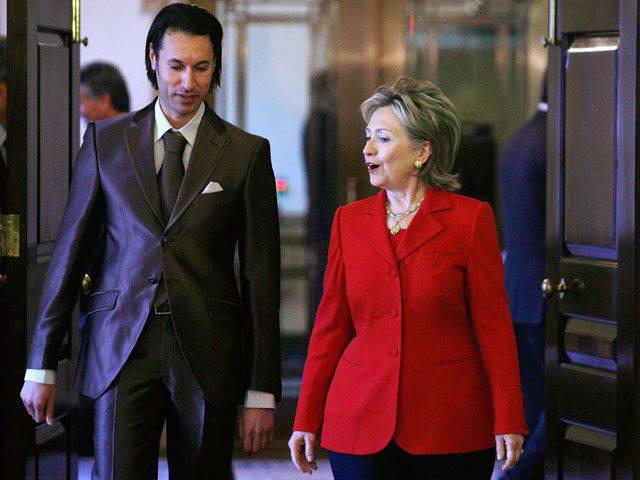 This episode has already entered history as a vivid example of how low a politician of international importance can fall today. October 20 2011, on the mobile phone of Hillary Clinton, who was then US Secretary of State, received footage of the brutal murder of the Libyan leader Muammar Gaddafi and his son Mutassim. This woman, I may say so, laughed and enthusiastically shouted “Wow!”

Two thousand years ago, the biblical Herodias, the Queen of the Jews, was also rejoiced when her daughter Salome presented the severed head of John the Baptist on a dish. But at one time Hillary met with Mutassim Gaddafi, shook his hand, and then on her face shone the same smile.

“They came, they saw, he died,” Clinton said then, either trying to joke, or seriously imitating the Roman emperor Caesar. True, the victory over the Libyan Jamahiriya was given to the United States and its NATO allies is not so easy as Caesar in the battle of Zela. The United States did not “come, see, win” at all, and before that, during the 7 months, Libya was subjected to barbaric bombardments, sparing no one on its way.

Then the scandal associated with further events in Libya, largely forced the frantic Hillary to leave the post of US Secretary of State. The “Democratic rebels,” who were so vehemently supported by Washington, killed in the city of Benghazi, American diplomat Christopher Stevens and several other employees of the American consulate. Then it became known that shortly before his death Stevens appealed to Clinton with a request to strengthen the security of the building of the consulate, but was refused. Madam Secretary of State did not want to think badly about these very Libyan "rebels". In American society and political circles, she was very strongly condemned for the incident, and soon after that, at the beginning of 2013, she had to resign.

Along with the same Christopher Stevens, Clinton with might and main supported another “democratic rebels” in Syria. According to US Senator Rand Paul, Stevens coordinated the supply of weapons to terrorists operating against the SAR, and also participated in the recruitment of "Syrian opposition" militants. And a week before his murder, Stevens, with the knowledge of Clinton, was involved in sending a ship from Libya with a huge party weapons for the anti-Syrian rebels.

Now Madame Madden is aiming even higher - for the US presidency. He wants to run for the Democratic Party and spend a record amount on his campaign - 2,5 billion dollars. Republican competitors immediately after her announcement began the Stop Clinton campaign.

Earlier, in the fall of 2007, Hillary had already tried to participate in the presidential race, but from the Democrats to the highest position went Barack Obama. Now that the latter’s second term is ending, there are many chances that it is the former US Secretary of State who will become the candidate of the Democratic Party.

Even as the first lady of the United States during the presidency of Bill Clinton, Hillary has established herself as a very ambitious and overbearing lady. She played a significant role in politics. Her husband was particularly distinguished by the scandal with Monika Lewinsky, and, in order to hush up uncomfortable voices in the press, he began the monstrous bombardment of Yugoslavia.

Hillary as state secretary confirmed the saying “Husband and wife are one Satan”. If Barack Obama was not eager to get into the Libyan conflict, then Clinton turned out to be a “war hawk” and did everything in her power to push the decision on military aggression against Tripoli.

Then Madame Clinton took a tougher position than Obama regarding military intervention in the internal affairs of Syria. She insisted on increasing the support of Syrian terrorists (who already received quite a lot of so-called “non-lethal” assistance). In this regard, it is closely intertwined with Democratic opponents - Republicans.

Yes, and with respect to Russia, the ex-Secretary of State takes a frankly hostile policy. Back in the distant 2008 year, when there were no current sanctions and confrontation between the US and the Russian Federation over Ukraine, Clinton responded to George W. Bush’s statement: “I looked into Putin’s eyes and saw in them a soul.” “He was a member of the KGB and, by definition, he has no soul,” Hillary said. (You can relate differently to V.Putin. But do American officials, without a twinge of conscience, have the ability to “bomb into the stone age” any small country that they did not like and did not please them?)

Wanting to reward Clinton for the hatred of Russia, former Georgian President Mikhail Saakashvili even presented her with a Georgian passport, so she is now a citizen of Georgia. And she also has a much tougher rhetoric than Obama’s against Iran. And she zealously in favor of delivering weapons to the junta Poroshenko, so that he killed even more people in the Donbas.

A likely candidate for future presidents from the US Republican Party, the son of 41 and the younger brother of 43 President of the USA, Jeb Bush, was also named. But the same US in its propaganda actively condemned the Syrian president only because he was the son of the previous president of this country, Hafez Al-Assad. They were extremely unhappy that the Libyan leader Muammar Gaddafi planned to transfer, after all the necessary procedures, power to his son Seif Al-Islam. Say, “dictatorial regimes”, “dynasties”, “inherited power”. Washington not only closes its eyes to the dictatorial hereditary monarchy in the ally's country - Saudi Arabia. Now, perhaps, the third person from the Bush dynasty will be in power in the USA itself (unless, of course, the “democrat” wins).

Against this background, Russia's decision to lift the ban on the supply of C-300 complexes to Iran looks absolutely fair and logical. Only by strengthening our defense capability — our own and our allies, who can repel US aggression — can we survive in the world to come. At least, in order not to give such as “Madame Wow” new motives for cruel joy.