April 15 2015
129
Today, after the Holy Sunday of the Lord, after the greatest holiday of Orthodox Christians in the world, I want to write a good article about faith. You always want good, but it turns out again not very.

And again, the cause is Ukraine and the Ukrainian question. 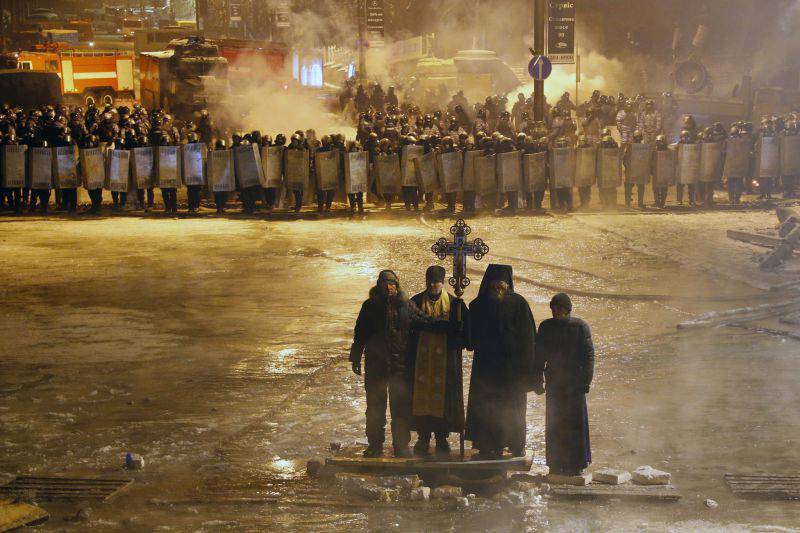 Orthodoxy is that rope, that steel cable that holds our souls together. It is the soul, at some sacred level. Economy connects the stomachs, if you will, the peoples digestive systems. Politics unites heads, bodies of states. But only faith, only one God unites souls.

Our faith, our Orthodox Church, the one that has blessed martial and worldly for feats for more than a thousand years, is now being subjected to another test. Church want to break from the inside. They want to create ukroerzats faith.

Back in Soviet times, when it was not customary to advertise their commitment to the church, in a small church in the territory of one of the Moscow factories, one could constantly see strong, trained men with a hard look. Obviously not the workers of this plant or the ZIL plant that was nearby. They silently laid flowers on the graves of the warrior monks Peresvet and Oslyabi. Silently put the funeral candles. They silently prayed about the icons and left. They left to return or never to return. But this is so, the lyrics for those who returned. Not the lyrics that even in those days it was necessary for the soul, in addition to the Charter of the CPSU.

You ask, what about Ukraine? And despite the fact that it is by faith that the next blow will be dealt.

The most powerful is still UPTSMP. Just because once it was strengthened in these places. Because Khreshchatyk in Kiev. Because Kiev-Pechersk Lavra. Many citizens of the former Ukraine, Orthodox Christians, the flock of this church.

The second largest is the UTSCP. The church, created in opposition to the UPTSMP. In many ways, openly opposing the Moscow Patriarchate.

And the third, the smallest of the existing - UAOC.

This is the initial balance of power.

For several years, the churches and monasteries of the UPTsMP have been seized by representatives of other churches. Priests are expelled from the parishes with the full connivance of the authorities. Monasteries and temples in the east of the former Ukraine have been desecrated and destroyed for a year. In the zone of the so-called ATO. But this is not enough. Faith persists.

Inside the competing churches a new plan has matured. More precisely, he matured a long time ago, now he was just voiced. Obvious from the point of view of formal logic, but not feasible before. Talk about the merger of the UOCCC and the UAOC begins. It is not even about the union, but the absorption of one of the churches.

The main opponent of such a union was the head of the UAOC, Metropolitan Methodius. It was he, with his energy and authority, that kept the Autocephalous Church independent. Yes, and personal relations with Metropolitan Filaret were, to put it mildly, not very. But just recently, 24 in February of this year, Methodius died. Eternal people does not happen. We all come and go in due time. The time has come and Metropolitan Methodius.

Macau became the locum tenant of the UAOC. And it was he who, in his interview after the holiday liturgy, declared his desire to unite. Moreover, the statement said about the removal of conditions for the association.

“I do not pretend and will not claim a leadership. I am ready to yield. ” These words of Macarius speak for themselves.

The reaction of the UTSCP was instantaneous. Patriarch Filaret was not long in coming.

"If they seriously want to unite - let's unite" Ie readiness of both parties is confirmed.

Where does the wind come from? Where did this idea come from? And it becomes clear when you dig a little bit of material. Constantinople. More precisely, the Ecumenical Patriarch Bartholomew of Constantinople. It was from his submission that Ukrainians began to push in every way to create a single Ukrainian Orthodox Church, independent of the Moscow Patriarchate. It was after the meeting with him, having enlisted his support, Mari made a statement about the union.

What does this threaten the souls of Ukrainians? Yes, and our souls, too? Well, unite, so what? Faith will remain Orthodox. So, no contradictions. Only not so simple.

We are present at the birth of a new, fairly large church. Orthodox, but competing with PCMP. The church, which for the first time in stories Orthodoxy will not be built on the attraction of new believers, not on the creation of new churches and monasteries, but on the capture of already existing Orthodox communities. On the revision of the orthodoxy itself.

Such a Bright Week began in Ukraine.

The program for the restructuring of the brain in Ukraine continues to gain momentum. And each head has its own woodpecker. Young and young - the Internet. Older - TV. Believers - the church. No one, as they say, should remain "uninspired."