April 15 2015
9
The "father" of armored vehicles in the United States was a major (later Colonel) P. Davidson, commander of the North-Western Naval Academy in Lake Geneva, Wisconsin. In 1899, Davidson put the Colt-Browning machine gun on a three-wheeled car chassis and, as he had an armored shield, he received, thus, the first American BA! The machine gun could rotate 180 degrees, shoot 2000 yards, and had 480 gunfire per minute. The car crew consisted of four people sitting in pairs back to back. When fully loaded, this miracle of military equipment could also carry a tent and 5000 cartridges. Well, this car was supposed to be used as a road patrol car and to support cyclists. In 1900, he already used a four-wheeled chassis, so progress, as you see, was steady! 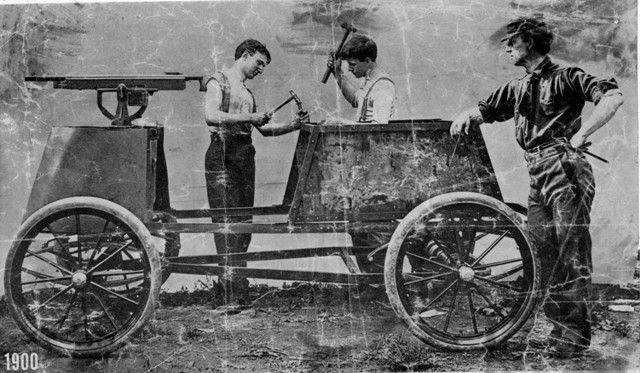 In the summer of 1900, Davidson took this car from Fort Sheridan, Illinois, and went to Washington to show General Nelson A. Miles. The demonstration impressed the general and in 1903 he suggested that the Secretary of State should equip Davidson’s five existing cavalry regiments in the event of war. But since no war took place, in practice it could not be realized. 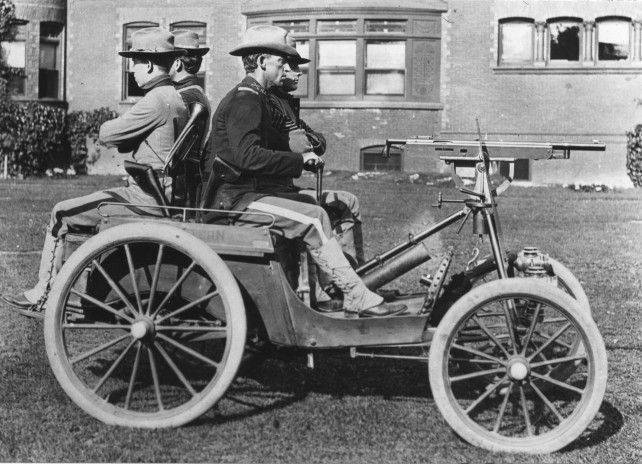 However, the inventor did not stop it, and in 1902, he put the machine gun on the steam car and showed it at the motor show in St. Louis. In 1909, he acquired a new Cadillac and again equipped it with a Colt-Browning machine gun. There were followers who put the Maclean's automatic 37-mm cannon on the truck, and soon, during the 1909 exercise, the army team tried all of this. At that time, the threat from the air began to grow, and Davidson was one of the first to propagandize similar BAs as an air defense system capable of “catching up and eliminating any newcomers” from the sky.

In 1910, Hugh Gallagher designed and built the BTR on the 2 chassis of the White ton commercial truck. He could carry 16 private men and a squad leader. But the army did not bother with his car.

Two more Cadillacs in 1911 and 1912. they were equipped with radio equipment, a powerful searchlight, a telescopic mast for a heliograph, and even ... small balloons for lifting the antenna. Without exaggeration, it was possible to say that at that time it was the most modern reconnaissance device in the world, although the reservation on it was, as before, only a machine gun shield. And four of these cars immediately bought the Government of Guatemala, although what they really explored there and whom only God knows. Meanwhile, Davidson built a reconnaissance vehicle, including a voice recorder and roller skates, an ambulance car with a stretcher and an X-ray machine, a field kitchen with an electric stove driven by an engine and a generator. 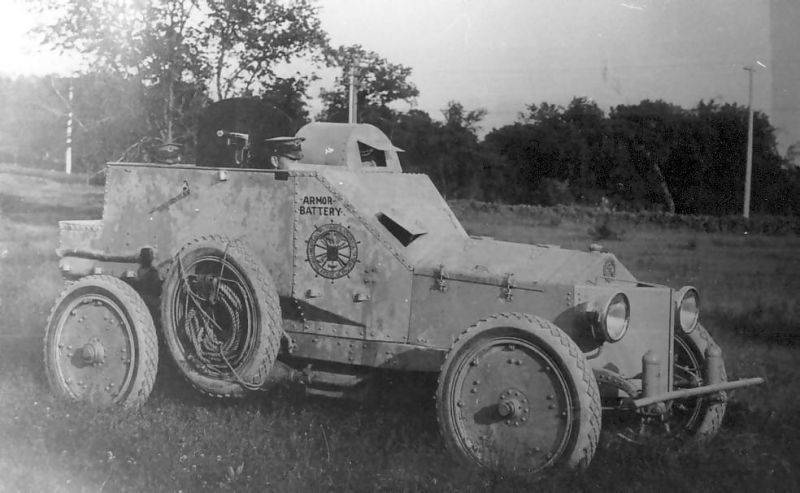 There he is - the first real armored vehicle of Colonel Davidson

Finally, in 1915, Davidson built an already fully armored vehicle, which became the first real American armored car. The rear part of the hull was completely open and there was a machine gun on the rack behind an armored shield. For the driver was envisaged armored cabin. In June, 1915, Colonel Davidson and 30, his cadets on his BA and seven auxiliary machines drove from Illinois to the International Exhibition in San Francisco, California. Although most of the journey took place in the rain, 34 a day after the start, all eight vehicles arrived at the site, proving their high reliability. However, this time this car did not arouse much interest among the military. And it turned out that Davidson's armored cars were used only ... in the Academy under his jurisdiction, moreover, until the 1927 year, and one of them was even kept in the Museum of Science and Industry in Chicago. 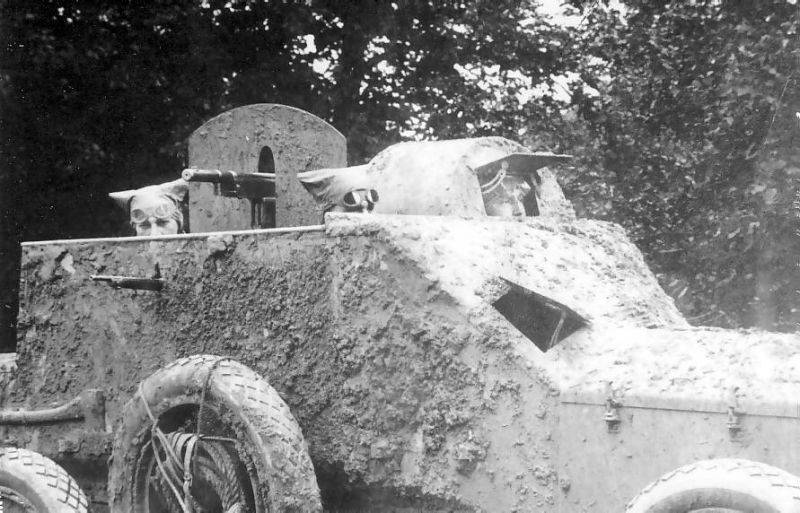 And this is how he looked after the tests 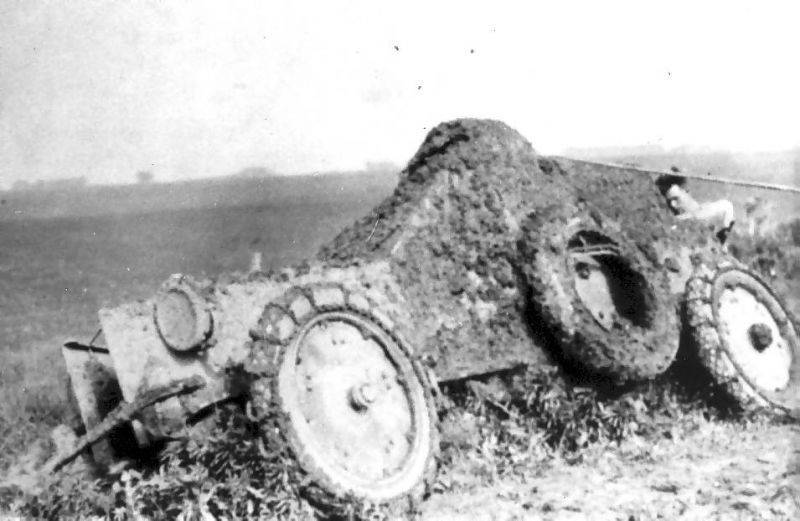 And so, too, sometimes he looked!

In 1914, the superintendent of the Thomas B. Jeffrey factory, named Jerry de Cou, designed and built an armored vehicle on the chassis of the all-wheel drive Jeffrey-Quad car. Then two more BAs were built on the same chassis, differing in details. One of the three BAs was with an octagonal central superstructure (with large opening embrasures for machine guns) and closed wheels. The other had a relatively low hull with a round rotating turret, and the third, known in the United States as the “Armored Vehicle No. 1”, had a tall hull with a turret in the center, and a second turret in the rear. The second machine immediately found a use: it was used by the US Army on the border with Mexico in 1916, during the Pancho Villa uprising. A third machine of this type was also used there. 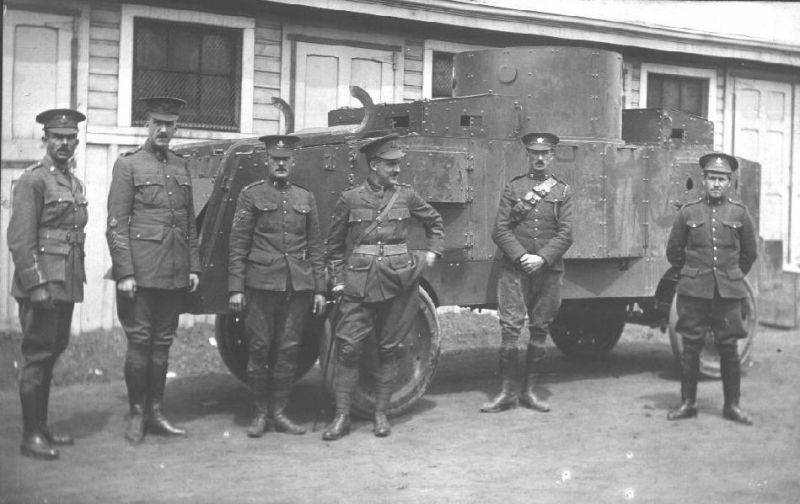 The car had controls both front and rear. At the same time, all the wheels were leading and steering, which for that time was something out of the ordinary. Another innovation was two curved beams on the hull to cut wire fences. The suspension consisted of semi-elliptic leaf springs in front and behind, and solid tires. These BAs weighed about 6 tons and four-cylinder engine power 40 l. with. The maximum speed was about 32 km / h both forward and backward. But the armor on it was very thin: 3,8 — 5,1 mm. The crew consisted of a 4 man.

Armored cars were liked by the military, exported to Canada, and then produced there, and delivered to Europe by the British. It was not possible to establish the exact number of cars produced, but at the end of 1917, about forty "quads" were sent to the British army in India and twenty-two more vehicles were in Ireland in 1919. Cars in India were used to equip one of the newly formed parts of the Royal Tank Corps in October 1921. Later, many of them were disassembled for parts, as the latter were in short supply and had to be repaired according to the “one of the two” principle. Bad roads on the northwestern border of India (as Pakistan was then called) showed that the Jeffrey Quads were not built well enough. The remaining vehicles were decommissioned in 1925 and auctioned off.

It is known that the original Jeffrey Quad models each had four or even more Benet-Mercier machine guns, but machines in Ireland and India were usually armed with only one standard Vickers machine gun of rifle caliber mounted in the turret. Benet-Mercier machine gun is actually the same Hotchkiss, but adapted to be mounted on a tank or armored car. Power supply from standard cassettes, but refilled into it not on the left, but on the right. High combat qualities did not possess.

In 1915, AMC commissioned the United States Marine Corps to launch the first full-fledged armored vehicle, the King. It was built according to the layout scheme with a front engine, had a wheel formula 4х2 and spoke wheels. The rear wheels were twinned.

The fighting compartment was equipped with a Colt-Browning machine gun and a Lewis machine gun on later models. On the BA was installed 8-cylinder gasoline engine.

Armored car "King" could be parsed for transfer by water. However, the car did not show sufficient reliability, besides the lack of qualified mechanics affected the quality of its maintenance.

Armored "King" was also used in the US Army. Five of these armored vehicles were used in Haiti and Santo Domingo until the 1927 year. All vehicles were finally decommissioned in the 1934 year. 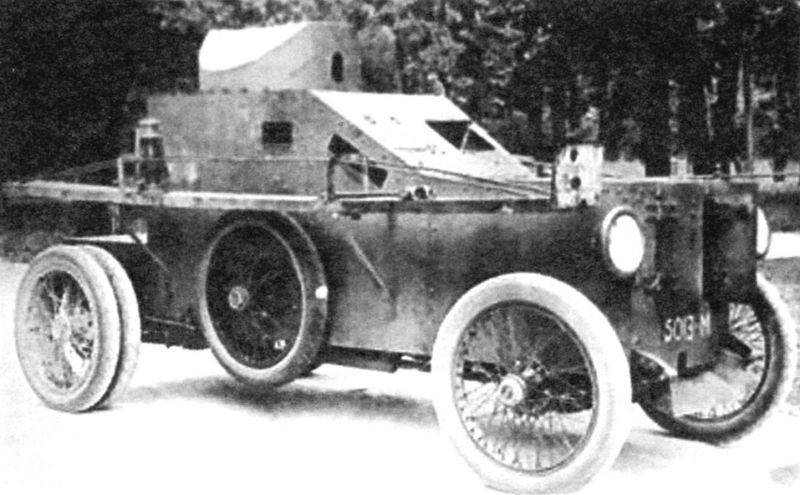 Comparing the genesis of American armored cars with European ones, one should not be surprised that he had such a strange character. Being a "overseas country", the United States could not be afraid of the appearance of enemy soldiers on its territory, which means that the Americans simply did not need armored cars. No wonder even powerful trucks from the United States in their homeland were not booked, but were delivered to Europe, where heavy cannon armored cars were made on their base. Americans themselves, they were simply not needed!

Even when the American soldiers finally arrived in Europe, they were in no hurry (or rather, their commanders were in no hurry) to drag all the weapons they needed across the ocean. No wonder they were armed with English airplanes, French cannons, machine guns and tanks. There weren’t enough of them even for parades, and tanks for plywood were built especially for “ceremonial purposes”! 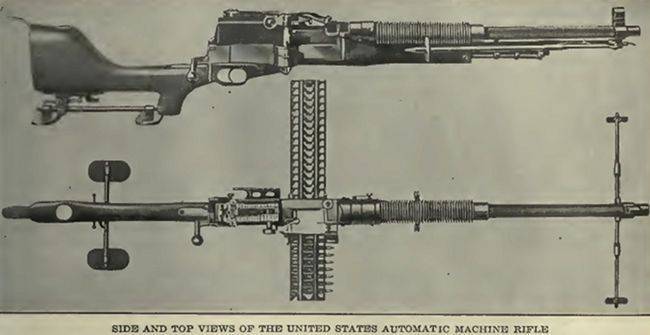 Another interesting feature was the installation of weapons. Due to the fact that Colt-Browning machine guns, which had a swinging lever under the barrel, were mounted on all American BAs, the embrasure on the turret had to be done quite high. Otherwise, this lever hit the body of the car when firing. Or in general it was placed in an armored cockpit (in the terminology of the Americans themselves), so that only the trunk protruded.