"Shock" Leszek is already in Ukraine

April 13 2015
47
Last week, the Ukrainian media casually mentioned the name of such a person as Leszek Balcerowicz. The general tone of the publications associated with this name looked like this: former Deputy Prime Minister and former Minister of Finance of Poland Leszek Balcerowicz urged the Ukrainian government to immediately start implementing the privatization plan. For the overwhelming majority of Ukrainian citizens, this “appeal” emanating from Balcerowich’s mouth (if Ukrainian citizens even paid attention to these “fleeting” publications of Ukrainian news agencies against the background of squabbles in the Rada, the rise in prices for all without exception and against the background of the situation in Donbass) seem no more than the next rant of another foreign "expert". Considering that foreign “experts” already and the ranks of members of the Cabinet of “Square” replenish, speaking to the right and left about their readiness to lead Ukraine to a brighter future, an ordinary Ukrainian citizen is not wisely confused in both the “experts” (internal and external) and in their statements and sentences. Moreover, a considerable number of "friends of the Ukrainian people" spoke about privatization in Ukraine and before Balcerowicz.


But Leshek Baltserovich is not a figure at all, whose statements to Ukrainian citizens can be easily ignored. This character is well known to those who still spit or are baptized at the mere mention of such terms as "500 days program" or "shock therapy." It was to these terms that the Polish economist, who, by the way, had time to work at the Institute of Marxism-Leninism, had the most direct connection.

So what advises the Ukrainian government, Mr. Baltserovich, and who is he at all? Everything in order ...

Leshek Baltserovich, outwardly having absolutely nothing to do with Ukraine, voiced as much as a whole list of economic steps that Ukraine should take. The most important step, according to the Pole, is large-scale privatization, which “must end state property in order to ensure demonopolization, create competition and, as a result, economic growth”.

Balcerowicz quotes Ukrainian newspaper Zn.ua, telling that this person comes to Kiev for the second time this year:
I am not saying that everything should be privatized. But it is impossible to postpone privatization. If there is stabilization, and with the successful implementation of the program it is possible in a few months, then the prices of enterprises will also increase.

Demonopolization. Where there is a list of monopolies that need to be broken, that is, create real competition. Mass deregulation. Is there a commission? And the commission of the highest level. After all, there are many good people in parliament who could quickly create a commission for deregulation. Moreover, in parallel to introduce such mechanisms so that new regulations do not suddenly begin to revive. And this is a very important point. 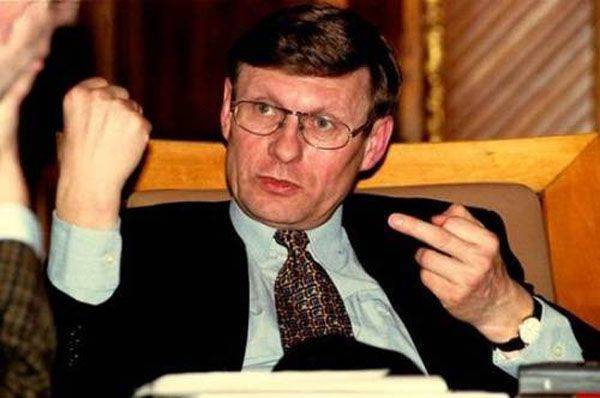 So, once again a foreigner arrives in Kiev, who seems to be directing the work of the government in the direction necessary for Ukraine. But is it for Ukraine? .. And this is a key question, given the personality of the ex-Minister of Finance of the Polish government.

For reference: Leszek Balcerowicz - a native of the Polish city of Lipno, a graduate of the Faculty of the External Main School of Planning and Statistics of Poland, a student at the University of St. John in New York. It is considered the author of the scenario of the Polish “shock therapy” (“Balcerowicz plan”), the basis of which was the procedure of total “denationalization” (privatization) of strategic Polish enterprises. The Balcerowicz Plan, which Western historiography presents as “a series of positive reforms after 45 years of communist management inefficiency”, in fact led to a huge increase in unemployment, 6 -fold increase in foreign debt, the transfer of the most “tasty” from an economic point of view of companies into the hands of foreign owners and the emergence of an unprecedented stratification of society in terms of income. Nothing like? Well, of course, it reminds ... Our "dear" shock therapy "of the early nineties, when inflation gushed the population mercilessly, when for the beautiful candy wrappers -" vouchers "thanks to the" galaxy of young economic geniuses "of new Russia almost the whole country went at a ridiculous price foreign "investors" and those who today are called oligarchs.

And “Balcerowich’s plan” reminds of the Russian “shock therapy” precisely because this same Leszek, as already noted, who managed to learn the economic skills in the States, was a consultant to the Russian “young reformers”. It was he who at the beginning of 90 had distinguished himself as an adviser to the Russian ministers of the economic sector, urging those to repeat what he had already done in Poland, namely, to plunge into dragon loans from the IMF, to sell even the largest enterprises at the price of provincial one-bedroom apartments, to turn people into means for making money by transnational corporations.

Is Balcerovich himself writing his “plan”? Naturally, not myself ... Him, how to put it more softly, helped ... And the people we knew helped. The main one is the "old" Soros. Yes, yes, it was George Soros who supervised Balcerowicz’s work while he was in a high state position in the Polish Cabinet of Ministers. It was through Soros, who later recognized the “Balcerowich Plan” as an outstanding (it is understandable ...) set of reforms, that the Polish minister pushed the idea of ​​transferring the economy to those who should have earned the most, and, to put it simply, to those who the sacred right of the economy to be plundered was intended ... And it was precisely acquaintance with Soros that allowed Baltserovich to tour across Russia, convincing the "young reformers" of the vital importance of contacts with his chief puppeteer (although they were convincing, it was superfluous - they were simply helped by projects to get to assets more efficiently). They say that George and I will not advise you of the bad, but on the contrary - we will help you with word and deed, we will send you in the right direction. What turned Balcerowicz and Soros advice for the Russian people? - well known; what is called, on the skins have tested ...

Considering that Soros has recently begun to show a special interest in Ukraine, it becomes clear why Baltserovich began to visit Kiev. The plan does not change. However, if Poland is still trying to get out of Soros-Balcerowovich’s “shock therapy” thanks exclusively to loans, which are mainly used to pay off previously allocated loans from the IMF, and this is more or less successful with it, new "large-scale denationalization"? Here you need to understand that the previous privatization waves in Ukraine were passing with a twinkle, and its new stage will definitely not burn like a child ... But if Poland and Russia were included in the “therapy” with relatively low indicators of public debt, Ukraine would go into the “plan” Balcerowicz ”(and for some reason it seems that Ukraine will go in there if the next Maidan does not occur) with a national debt over 60% of GDP (and this is also not counting the new requests of the government of Yatsenyuk for the allocation of loans). With such an indicator, and in the presence of real, and not concocted by all sorts of "Fitch" and "S.-Pursami", the garbage rating of ukroeconomy, even what happened in Russia at the beginning of 90's, will seem to flowers in modern Ukraine. Balcerovich priyde - order povede ...

Ctrl Enter
Noticed oshЫbku Highlight text and press. Ctrl + Enter
We are
Prime passion. Who will replace Yatsenyuk as prime minister of Ukraine?Situational analysis of the death of the MH17 flight (Malaysian Boeing 777), made on the basis of engineering analysis from 15.08.2014
Military Reviewin Yandex News
Military Reviewin Google News
47 comments
Information
Dear reader, to leave comments on the publication, you must sign in.