April 22 2015
7
As for the technology itself, the construction of such “hill-based locks” was simple, but very effective. Firstly, the slopes of the selected hill were gently scraped off with ledges in accordance with the profile of the future wall. Then the largest stones were placed in the base, which determined the slope of the wall. After that, the wall was built up (for this purpose, scaffolding was used), but the space between the stones and the slopes of the hill was covered with cobblestones, on which large stones rested. Finally, when the wall reached the top, a moat previously dug around the castle was filled with water. 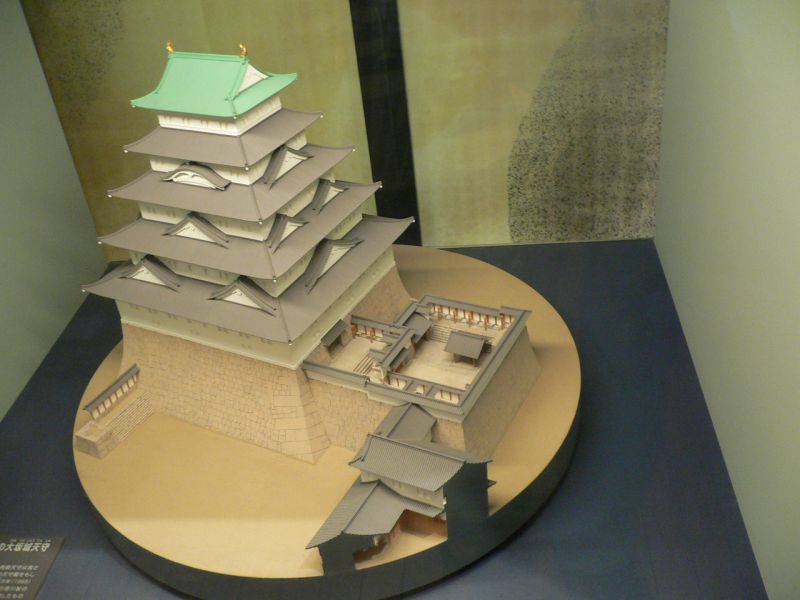 But above, on these stone foundations, it was customary to install relatively low walls made of rods, clay and broken stone, which were painted white with plaster. It was in them that the loopholes were made for firing at the enemy: triangular for riflemen and rectangular for archers. From above they were covered with a roof of tiles, bamboo shingles or straw. Another feature of these walls were trees planted right behind them, usually pines. Such a “living fence” served to protect against bullets and arrows, and besides, it obstructed the observation of what was happening outside the castle walls. In any case, this only added exotic castles to the Japanese castles — a ditch filled with water and framed the castle, a massive sloping base above it, a white whitewashed wall for us, and a green wall of pines above which usually hid fruit trees provisions! Usually the walls for the shooters were bunk. In this case, the arrows of the lower tier were located under the platform and shot at the enemy while sitting, but those that were on the platform itself could shoot again, sitting, through the loopholes, and standing above the roof covering the wall from bad weather. All this allowed on the attacked areas to cause a maximum of shooters on the wall and conduct almost continuous fire at the enemy! 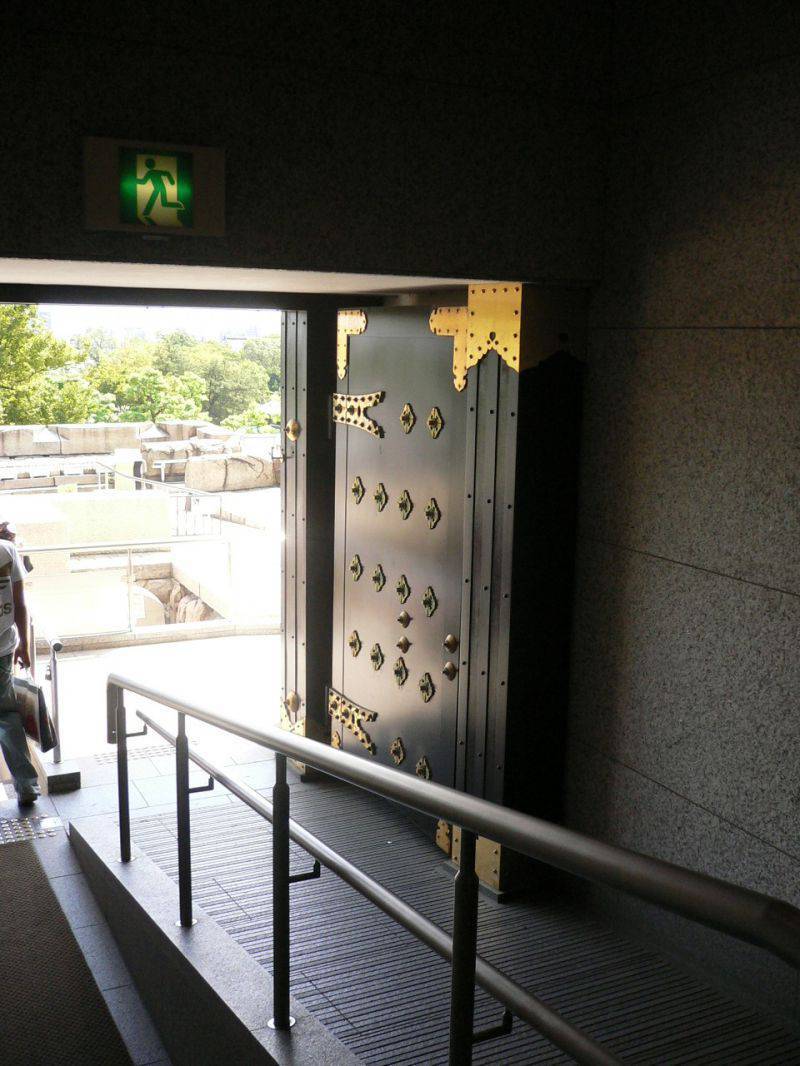 The door to the inner chambers of the castle looks very impressive.

At the corners of the walls were different, two- or three-tier towers, known as Sumi Yaguro (corner towers), they were an important element of the defense of the castle. They often had ishi otoshi (holes for dropping stones) - the Japanese equivalent of mounted loopholes-mashikuly. There was a special tower above the main gate to the castle. It was called the Watari Yagura, which meant “tower-bridge”, since it was usually possible to go through the gate of this tower to the bridge leading to the gate. Well, the gate itself was always made of very strong and massive wooden bars, hung on iron hinges and on top of that strengthened with iron plates with sharp spikes. 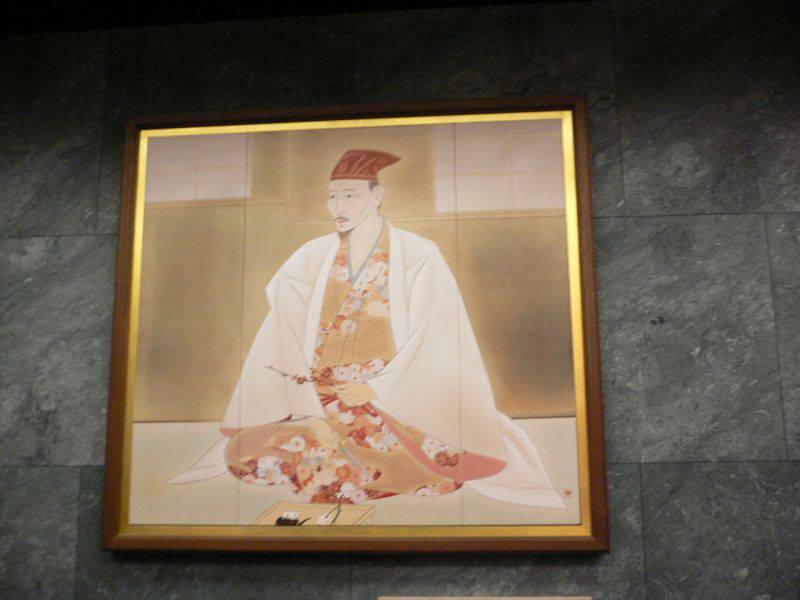 The founder of the castle, Kvampaku Toyotomi Hideyoshi, was the son of a woodcutter and attained the highest administrative position at the court. 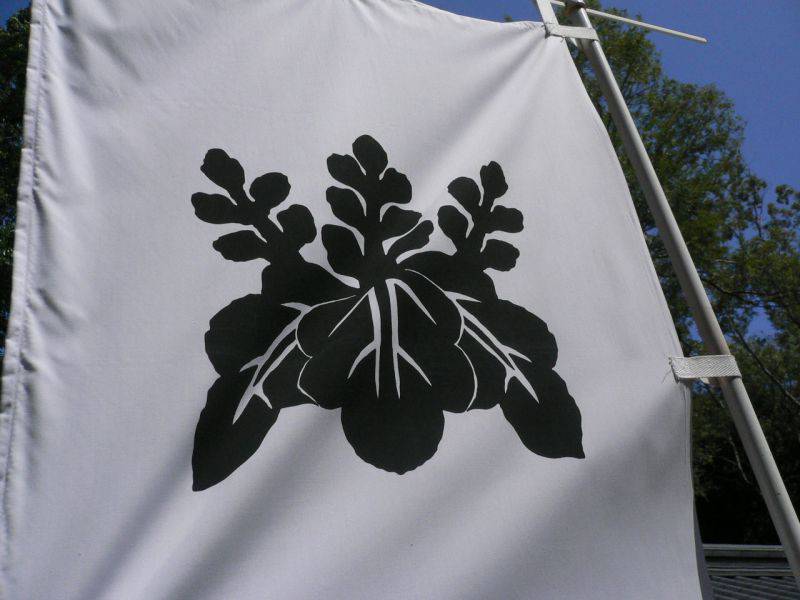 The flag with the image of Pavlon (mon Kiri) was assigned to the Ashikaga clan by the grateful emperor. Toyotomi also dared to use it, although he could not be a shogun because of his plebeian origin.

The largest tower in all Japanese castles - an analogue of the European dungeon - was called tenyukaku, or “main tower”. The word tensukaku means “the supreme heavenly protector,” and the height of the tower is usually its main feature that you pay attention to. In fact, the main tower is indeed the center of the Japanese castle, attracting the eye even before a person approaches its gate or walls, since it is almost always the tallest building in the whole castle complex and can be seen many kilometers away. In some castles, only the main towers are preserved, which may be the reason for the appearance of a misconception about how the Japanese castle looked in reality. A typical main tower consisted of at least three tiers, although the number of the latter could have reached seven. And again, the appearance of the tower often did not match its design and internal structure, since it could have several underground floors. Tensyukaku had the following main functions:
1) served as an observation post;
2) acted as the last defensive line;
3) symbolized the power of a daimyo;
4) was used as a stockpile and treasure chest. 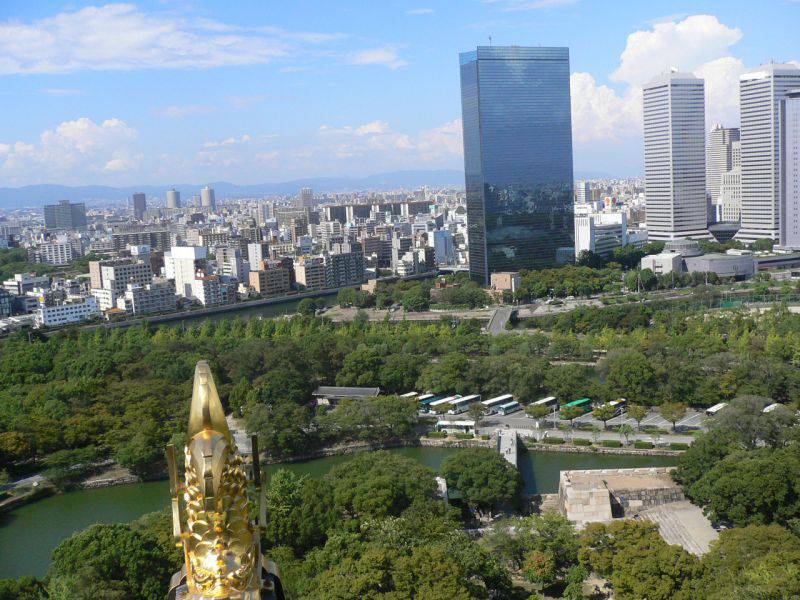 View from the tower of the castle on the surrounding skyscrapers 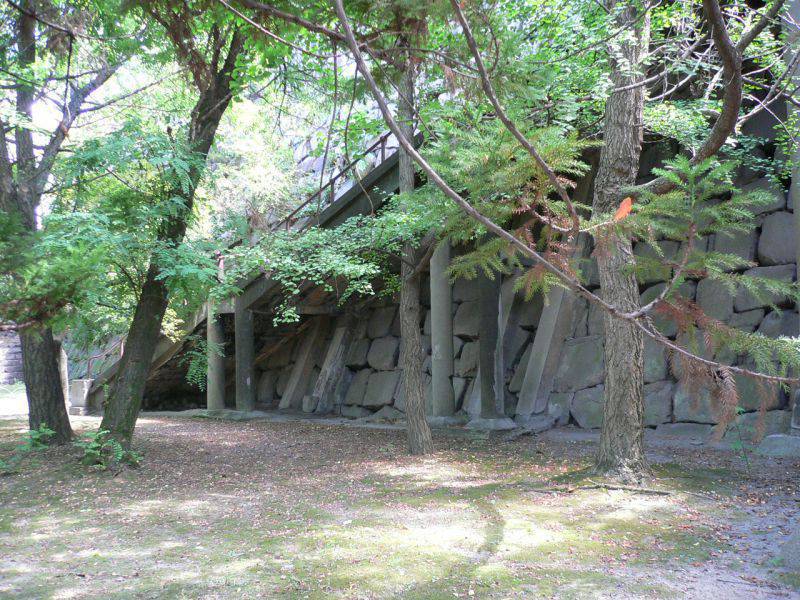 Ramps in the castle replaced the stairs

Portuguese Jesuit Joao Rodrigues, who visited one such Japanese castle, wrote about this: “Here they keep their treasures and their wives are gathered here during the siege. When they can no longer withstand a siege, they kill their women and children so that they do not fall into the hands of enemies; then, after burning the tower with gunpowder and other materials, so that even their bones do not survive, they rip their bellies ”. 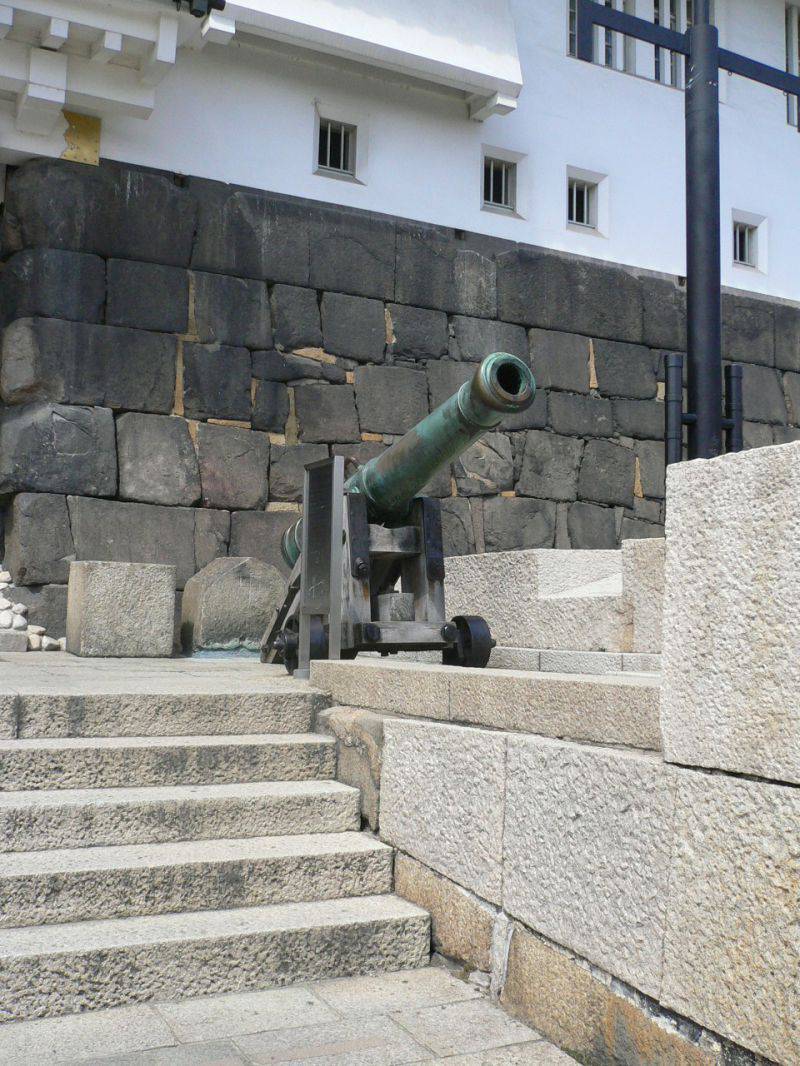 One of those guns that the Dutch provided Ieyasu Tokugawa for the siege of the castle. His defenders went to the negotiations and eventually surrendered after the core fired from such a gun killed two maidservants in the castle tower of the castle and almost lost his head to Hideyori himself - the son of Hideyoshi who died by this time 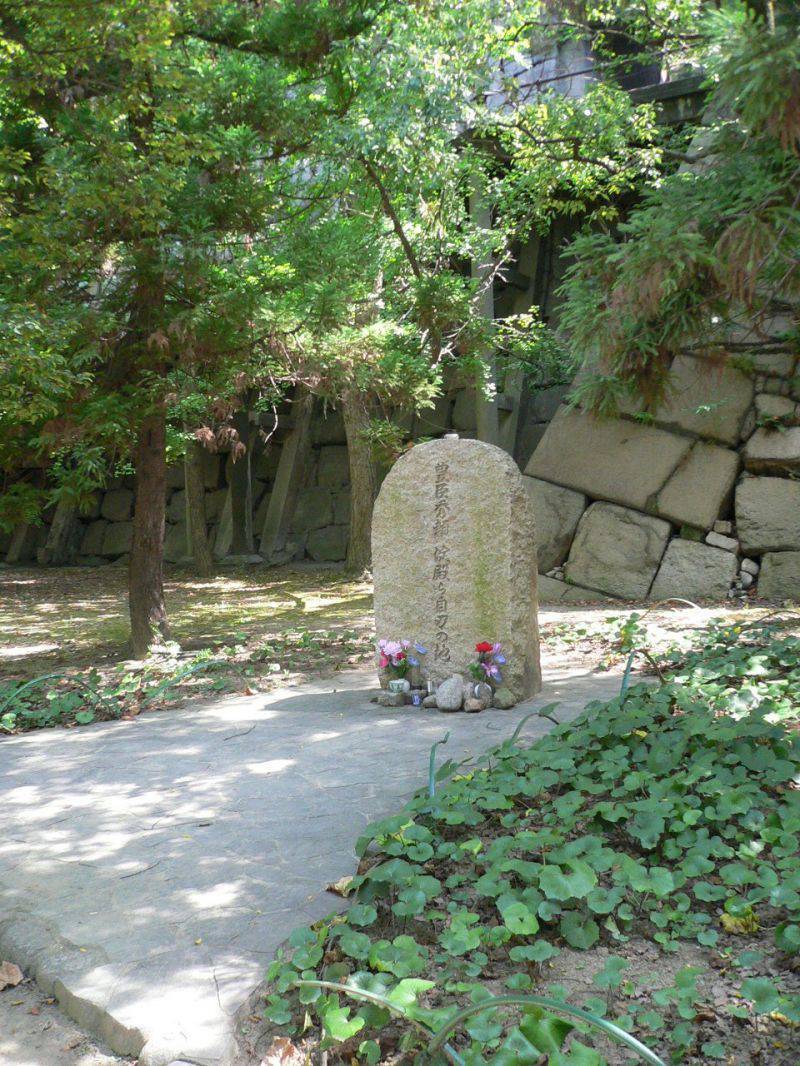 But on this very spot, seppuku Hideyori and his mother, the princess Etogimi

The main towers that have survived to the present day are usually painted white; however, it is not necessary that this was their original color scheme. It is known that the Azuchi and Osaka castles were painted in bright colors with patterns in the form of tigers and dragons. The exceptions are the so-called “black locks”, for example, such as Kumamoto and Okayama, where the color of ebony prevails over white plaster, and the only decoration is carved mon daimos on the gables. 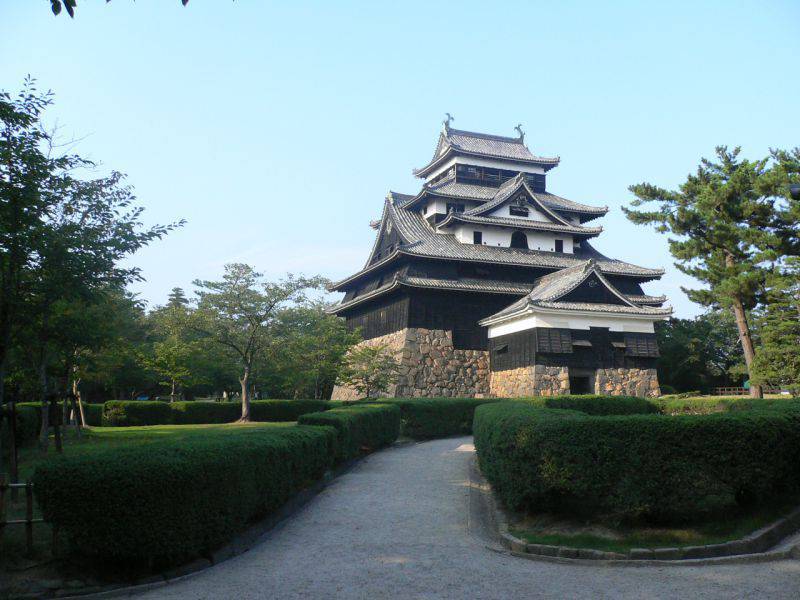 Usually Japanese white locks. Black is a rarity, and one of them is Matsue Castle 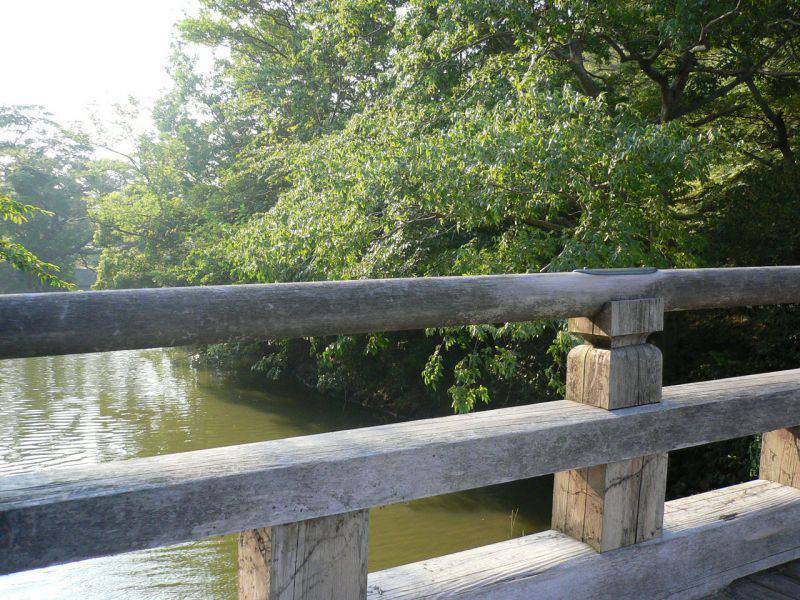 These rails on the bridge to Matsue Castle have not changed since its construction.

From a military point of view, Japanese castles differed from European ones also in the fact that, even in the most recent ones, there were no places for the installation of artillery pieces. Stones were thrown at the enemy who had risen to the walls, the simplest catapults were occasionally used, but the “heavy weaponry” of the castle was usually limited to this. Another thing is that the Japanese, both in the storming of the castle and in its defense, used thousands of arquebusiers and archers who maintained continuous fire from the walls at the enemy, while his soldiers, using the sloping walls of the castle, tried to climb them up with swords in their hands! 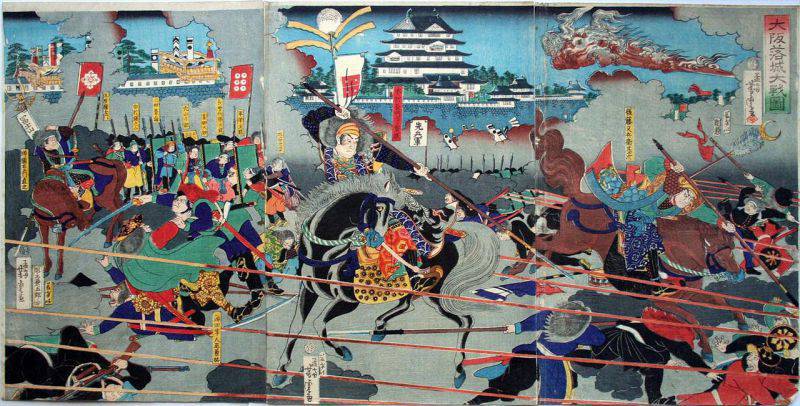 Battle at the walls of Osaka castle. Woodcut Utagawa Ösitor

Another disadvantage of the Japanese castle was its relative availability for ninja spies, for whom it was not difficult to penetrate it. And the matter is not only in the inclined stone facing of the base, on which they could climb up without much difficulty, but also in that the external walls standing on top of it with loopholes for musketeers and archers also presented no obstacles for them, because such was their design. After all, they were made of twigs, plastered with clay and covered with plaster so that, having the appropriate tools, a ninja could quickly make a hole in such a wall of sufficient size to get through it. Of course, sentries walked the wall. But people are people, they are not always as vigilant and attentive as discipline requires, so for skillful and experienced people like ninjas these walls were not an obstacle! 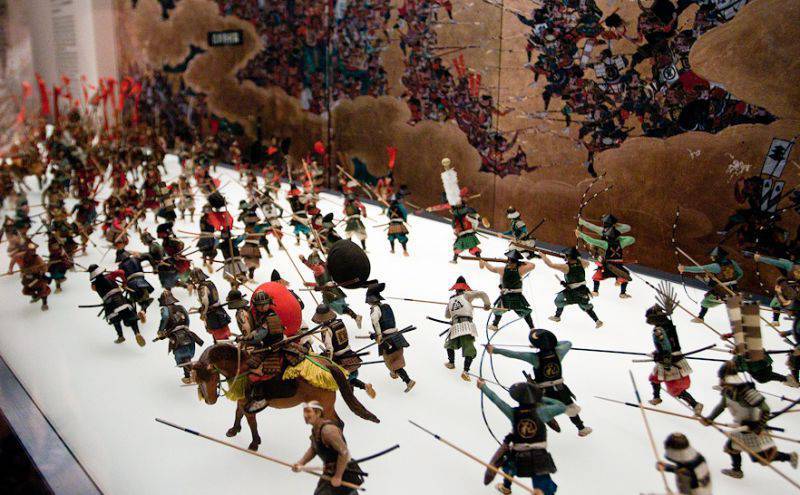 Inside the castle there is a museum dedicated to its siege by the troops of Ieyasu Tokugawa in the 1614-1615 years. But there is nothing to photograph there, except this huge diorama, which reproduces the last battle for this castle. 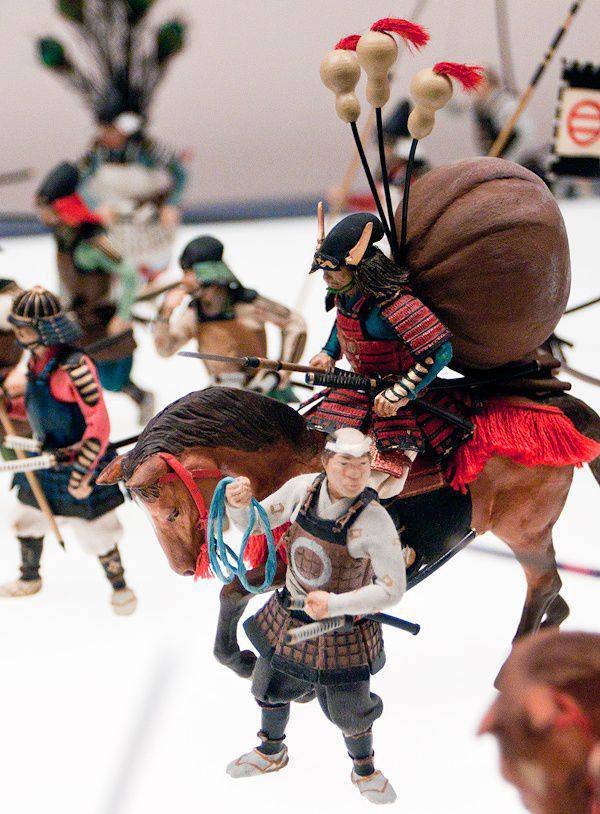 All the figures are made on the diorama very carefully and historically authentic. For example, a rider with horror behind him and a sashimono in the form of three pumpkins! Near each famous person is a sign with an explanatory inscription in Japanese and English.[/ Center] 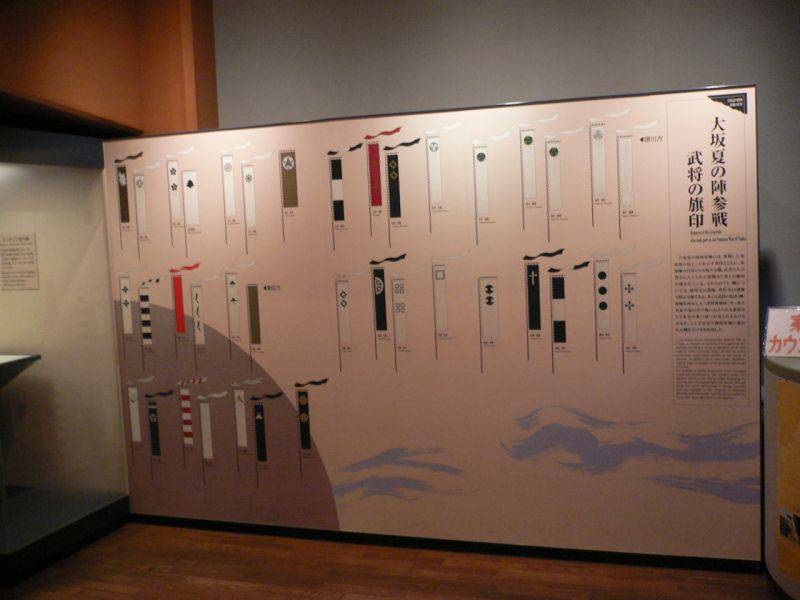 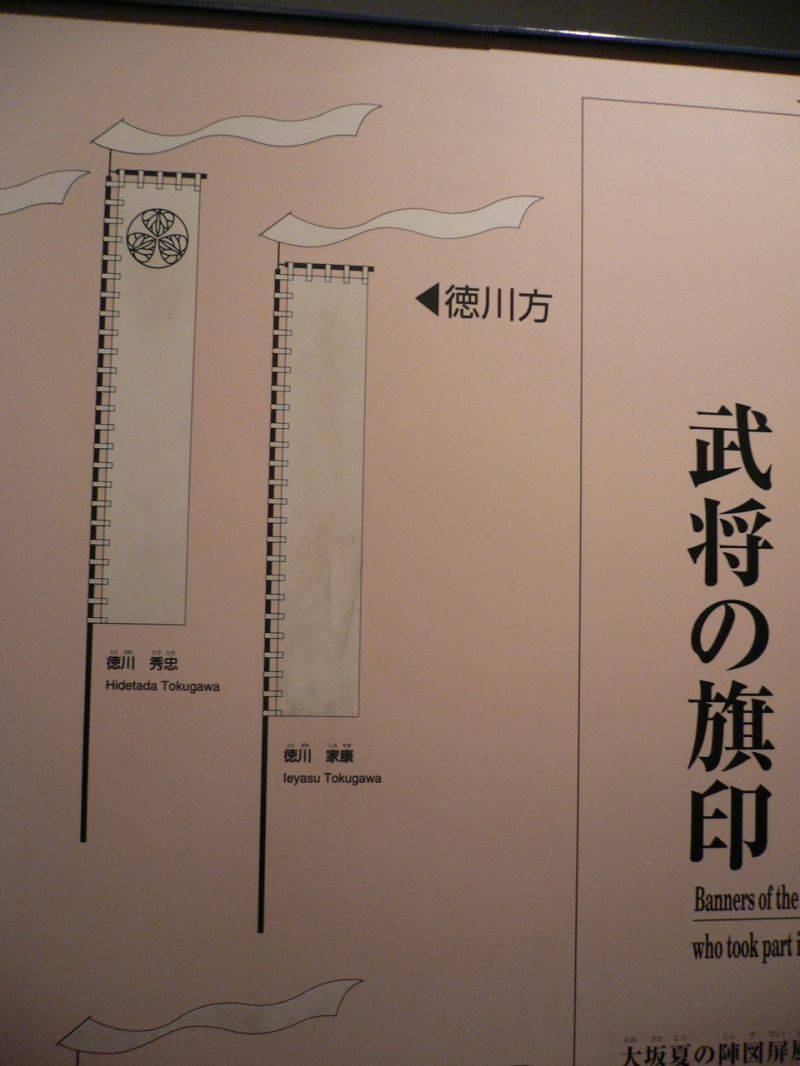 The flag of the besieging castle of Tokugawa Ieyasu looked like a simple white cloth, and his son Hidedead bore the image of a stock-rose - a generic sign of this family.[/ Center]

As for the living quarters, the ceremonial halls usually got off with a luxury that made a very strong impression on Europeans. For example, the Portuguese Luis Frois, after visiting one such castle, wrote: “No palaces and houses that I saw in Portugal, India and Japan can compare with these in luxury, wealth and purity.” Then followed a long description listing the drawing rooms and gardens that made up the Nobunaga Palace at the foot of a high mountain, on which stood the main tower of this castle. When Froish visited the Azuchi castle, he described the abundant use of gold, as well as the fact that everything was "beautiful, excellent and sparkling." He also did not forget to note the fortress of stone foundations and (as well as other visitors to the castles in Edo and Osaka) particularly highlighted the power and strength of the castle gates. 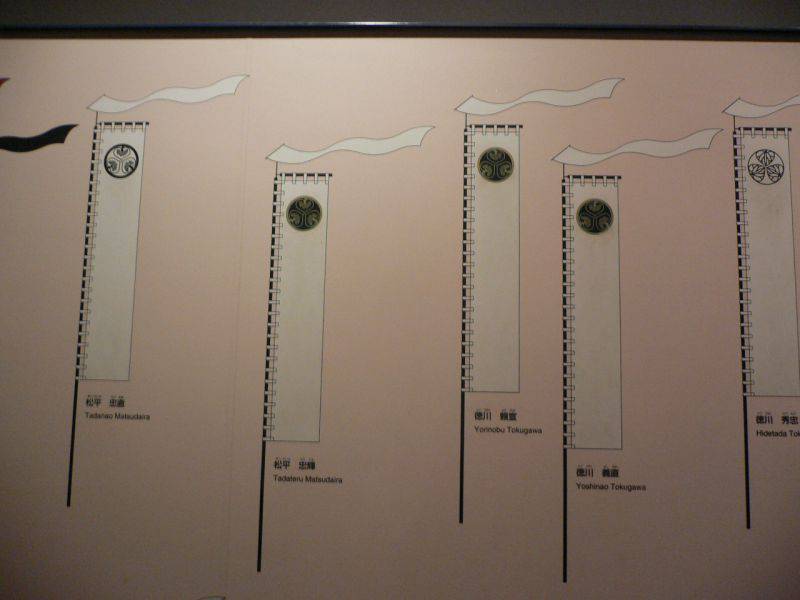 Another Portuguese, Rodrigo de Vivero-e-Velasco, had an audience with Tokugawa Hidetad, the second Shogun of Tokugawa, in Edo Castle in 1609, and described the first room he entered: “They put tatami mats on the floor , decorated with gold brocade, satin and velvet and embroidered with many golden flowers. These mats have a square shape, like a small table, and are so well suited to each other that they make an extremely pleasant impression. The walls and the ceiling are covered with wooden panels, which are decorated with a variety of hunting scenes painted in gold, silver and other colors, so that the tree itself is almost invisible. ” 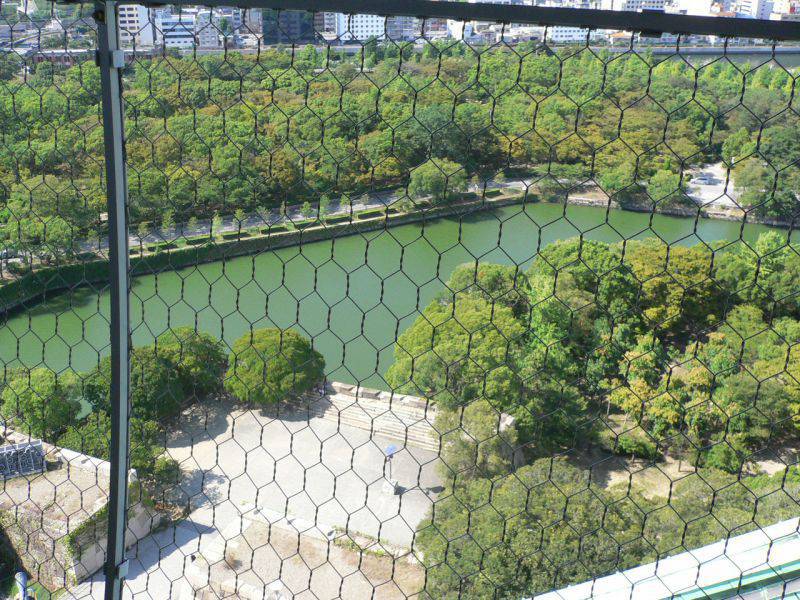 The observation galleries of the castle are surrounded by a net against suicides. Not a year goes by, so that, in spite of all the tricks, someone wouldn’t rush down with her head!

Subsequently, in the Tokugawa era, the rule was established: "one province - one castle", as a result of which many castles were destroyed, but others became real residences of provincial daimas with their gardens, parks and decorative ponds. Many castles were hit by American bombing aviation during the Second World War, however, they were subsequently restored, although a whole series - using reinforced concrete and modern construction methods. At the same time, other castles were restored using historically reliable materials, which is why they are very valuable monuments of the medieval castle architecture of Japan. The most beautiful castle is considered to be Himeji - a castle located west of Osaka, whose main tower dates from 1601. The castle in the center of Osaka, the one that besieged Tokugawa Ieyasu in order to put an end to Toyotomi Hideyoshi's heir, first burned down and then suffered severe damage. But its main tower today has been restored in all its splendor; walls and a wide moat around the castle with green water have also been preserved. Once inside the castle, everyone can inspect his courtyard, see what is inside the tower, and climb to the observation platforms. You can imagine yourself in the role of Toyotomi Hideyoshi and think about why fate is so ruthless to one and so favors the other. Although, of course, what he was thinking, looking at the Tokugawa troops surrounding his castle, we will never know! 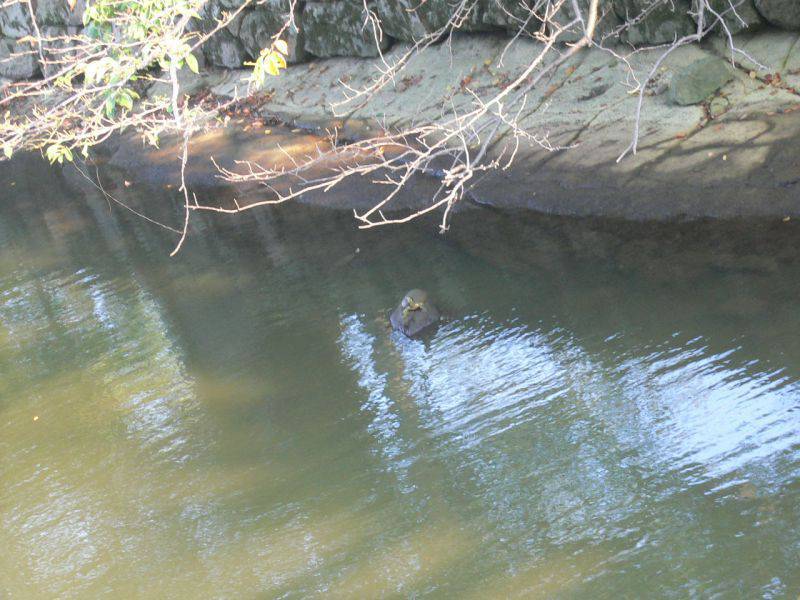 Just a duck: he lives in the moat of the castle and is not afraid of anything and no one! 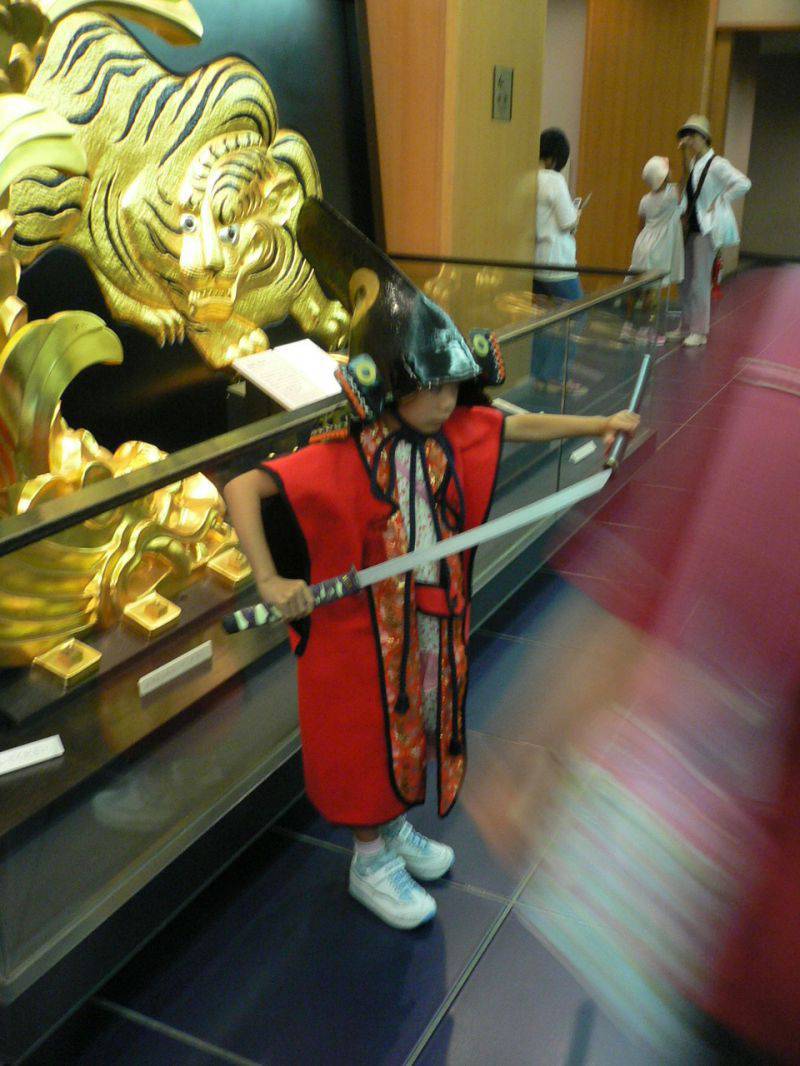 Japanese children in the castle expanse: you can try on ancient armor and play with the sword. That's how they are their history and learn!