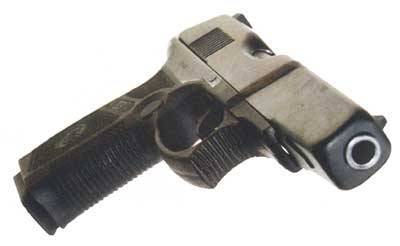 Army 6P35 pistol. In 1993, Grau specifies the requirements for the new arms. From this point on, it was decided to develop an army pistol for a new domestic 9x 19-mm cartridge, which later received an 7H21 index.

This cartridge is made in the dimensions of a standard NATO pistol cartridge 9x 19 mm. Parabellum., But it has more power, penetrability and striking effect. As conceived by the customer, this allows, when necessary, to use NATO ammunition when firing new domestic pistols. In addition, such a solution would allow the supply of a new pistol for export to countries traditionally using NATO pistol cartridges.

Currently, the most common in the world, received two schemes of automatic pistols. Automation with a free gate and a fixed barrel is used, as a rule, only in weapons for low-power cartridges. An example of this. domestic PM. Higher power cartridges require the use of an automatic circuit with a moving barrel, which is engaged with the bolt before firing. Practically, these are almost all pistols chambered for .parabellum. and even more powerful. This design with a high reliability of the entire system allows to slightly reduce the mass of the shutter and the impact of recoil when shooting. However, this scheme has its drawbacks. 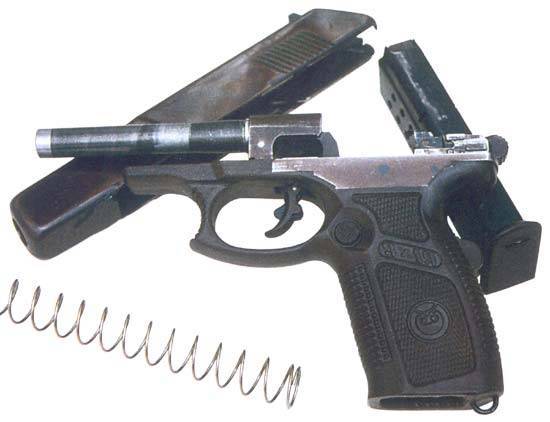 Specialists from TsNIItochMash, famous for its unconventional solutions in the development of new weapons, and here they went their own way. The designers of the 6P35 pistol TsNIItochMash, Peter Serdyukov and Igor Belyaev have studied in detail the foreign technological simplification of the pistol due to the rejection of the hammer impact mechanism and the manufacture of the frame of the plastic injection molding pistol. However, this path was not considered appropriate. To create a self-loading pistol, which has a small mass, but under a powerful cartridge, a bolt was developed, consisting of two main parts. Actually the body of the bolt and the battle larvae, spring-loaded among themselves. At the same time, the combat larva has the possibility of longitudinal movement relative to the body of the bolt.

Such a constructive solution, by the way, used in pistols for the first time in the world, allowed to spread one blow of a massive bolt against the frame limiter in the extreme rear position to two successive impacts of parts with smaller masses. In the proposed scheme, the impact of the valve body on the frame is applied at the moment when the shooter’s hand as a result of the first strike of the larva on the protrusion of the frame begins to move backwards and, consequently, the shooter experiences less pressure on the hand. It also allowed to reduce the weight and dimensions of the gun. 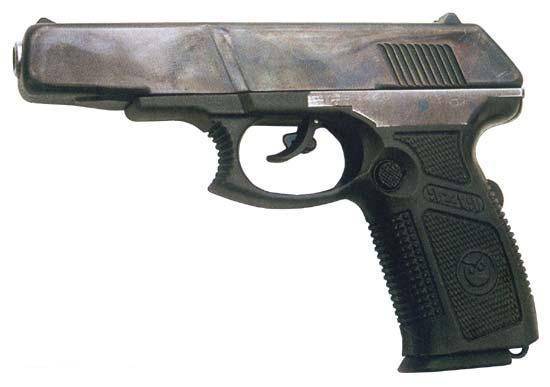 All parts of the gun have a streamlined shape, which reduces the possibility of hooking it for items of equipment when removing. The frame of the gun consists of two main parts. metal fittings, which is the power structure of the body, and a plastic pistol grip, made integral with the trigger guard. The stem is pressed into the reinforcement with six right-hand grooves. For the manufacture of the handle used high-strength plastics.Armid (a substitute for polyamide, the production of which, after the collapse of the USSR, remained in Ukraine). The handle has a large notch. Making part of the frame of plastic not only reduces labor costs for the production of weapons, but also allows you to make the gun easier.

The body of the shutter is made of welded from two stamped parts box-shaped. Unlike conventional manufacturing techniques for metal pistol gates or precision casting parts with subsequent machining, mainly related to drilling and milling, this solution significantly reduced the labor intensity and cost of weapons manufacturing. In the back of the bolt there is a large notch, convenient for it.
grip and retraction of the shutter in the rear position. The window for the extraction of spent cartridges is made with large bevels along the edges of the hole. This form of the valve body prevents dirt from getting inside the gun.

Trigger pistol. trigger, double action. As in other similar constructions, it ensures the production of the first shot by a self-platoon. However, for this the trigger must be put on a preliminary platoon (which, however, is absolutely safe for the shooter and practically does not upset the mainspring). Twisted combat spring is in the trigger.
The pull force is 1,5.2,5 kg,
and when shooting self-cocked. 4.6,5 kg.

Protection against accidental firing is carried out by two automatic fuses. One of them is located on the back of the pistol grip and blocks the sear, the second. on the trigger, it blocks the trigger. Extraction of the liner is carried out with a spring-loaded rotating ejector installed in the gate larva. Placing the ejector inside the valve body prevents dirt from entering it and delays. The reflection of the liner is provided by a reflector located in the frame. There are two stops on the frame to stop the larvae. Braking of the body of the bolt is carried out as a result of its impact on the frame stand, to which the barrel is fixed.

The sighting device consists of a fixed pillar and front sight, located on the body of the shutter. To bring the pistol to a normal battle, a set of pillars of different heights is used. Aiming at different ranges is carried out by removing the aiming point in height. To facilitate aiming at dark targets on the rear surfaces of the rear sight and front sight white stripes are applied. In order to avoid glare on the top flat surface of the shutter, between the front sight and the whole, guilloche is performed.

The supply of cartridges is carried out from the detachable 18-charging double-row magazine with two-sided feed of cartridges. The magazine is disconnected by pressing the stopper button located behind the trigger guard. Removing the magazine is facilitated by the feeder spring, which pushes it out of the handle. The button can, if necessary, be independently rearranged under the right or left hand.

Ctrl Enter
Noticed oshЫbku Highlight text and press. Ctrl + Enter
We are
No noise and dust. Part-2Automatic control systems for self-loading firearms (Part of 1)
29 comments
Information
Dear reader, to leave comments on the publication, you must to register.