April 20 2015
8
PR is not only posters, but also events and actions, which later will be happy to write to the media. During the First World War, the British, accustomed to high levels of consumption, were actively urged to save. Newspapers and magazines published recipes of various economical dishes, city fairs and contests of women hostesses were organized. About how women of Britain, who shorten their skirts, work on farms and in workshops, constantly wrote newspapers and magazines, and these photos even got into our Russian magazine Niva. 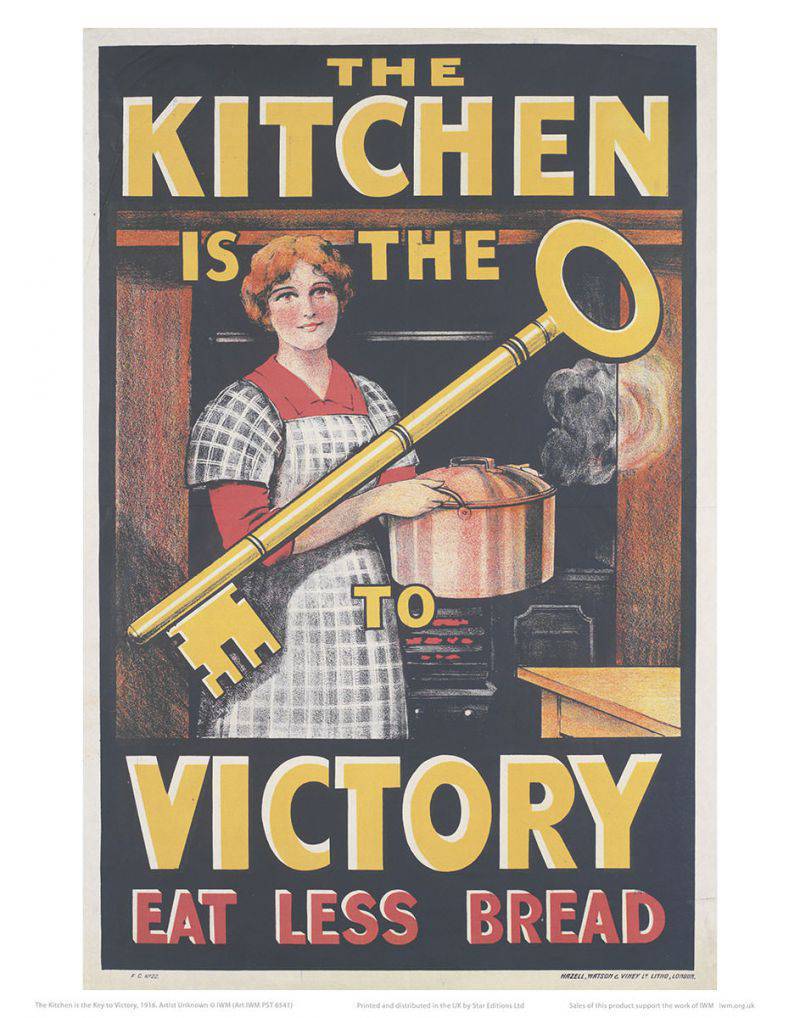 A poster that called housewives save. "The key to winning the kitchen!"

But ... it is impossible to keep saying “war, war!” All the time during the war. When in Wales the residents decided to hold a festival of Welsh songs and dances, Lloyd George personally came to them and said straight from the car that we would sing and have fun in spite of our to enemies that the war did not break us! ”Naturally, his photos immediately placed all the newspapers and magazines, which only strengthened his reputation. 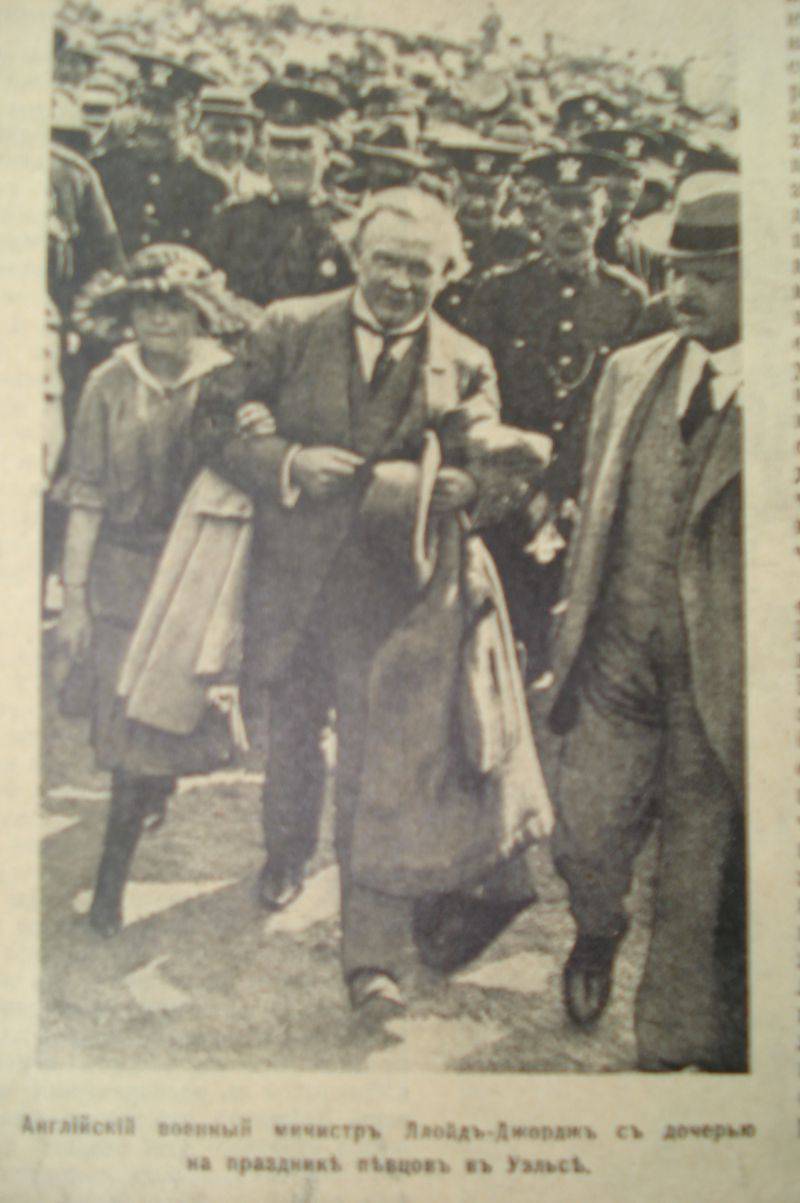 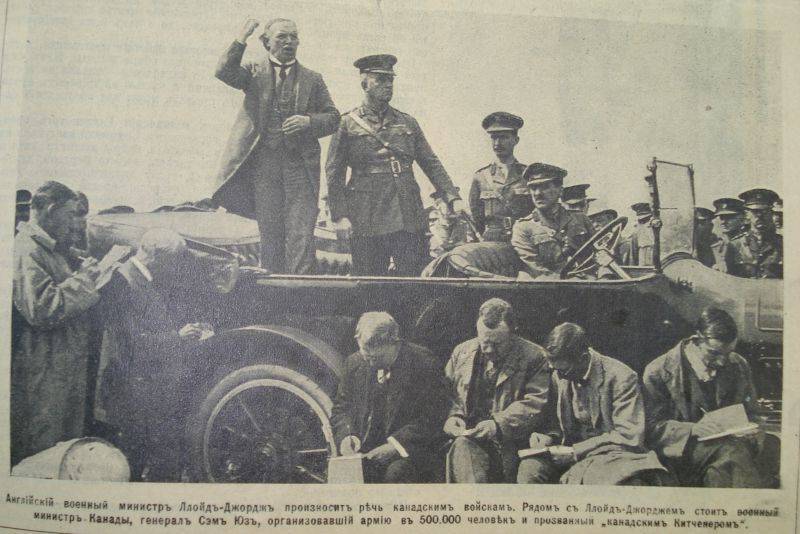 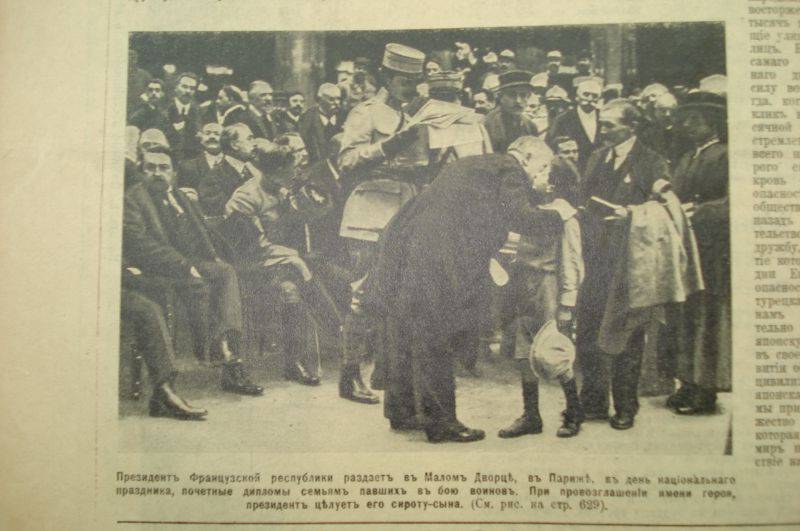 Also very good PR. They may have killed their father, but the French president himself kissed me!

In general, the reputation of a politician is a very important thing, and the task of the PR people is to strengthen it in every way. Although some politicians and the military themselves perfectly coped with this task. The real genius of PR was, for example, Napoleon Bonaparte, but many of his “colleagues in the profession” did not yield to him either. For example, American General George Patton everywhere appeared in a soldier's helmet and ... with a revolver "Colt the Peacemaker" in a cowboy holster on a belt, and the handle was lined with mother of pearl. Together with him, Field Marshal Bernard Montgomery (“our Monty”, as the soldiers called him) often went to the troops, dressed in an emphasizedly simple way. Once he arrived at the unit that was preparing to land in Normandy. He built them all, took off his helmet and ordered the soldiers to take off their helmets. Then he looked into their eyes and said: “When we will all be there, I will recognize each of you!” There was a mass of people, that is, what he said was simply ridiculous, but ... it had an effect on people, and how! 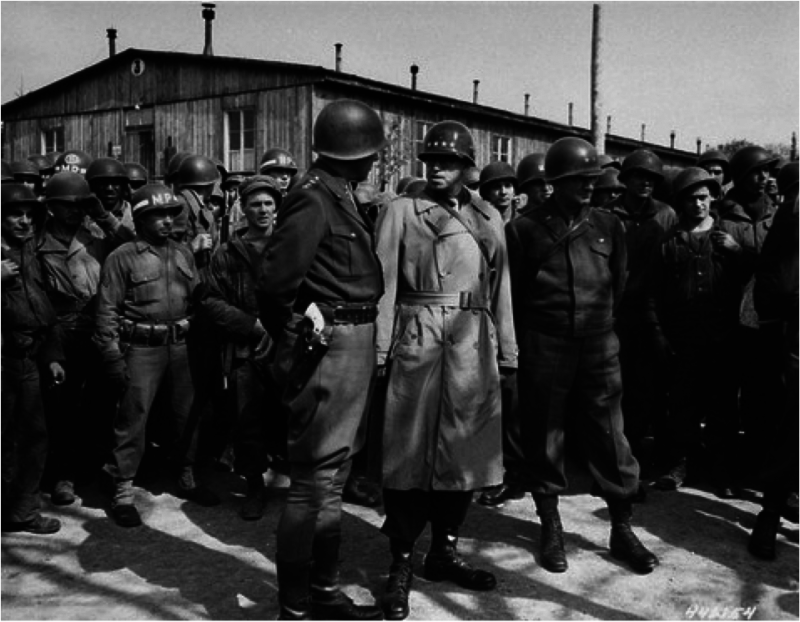 Here he is, handsome, with his famous revolver, talking to General Bradley 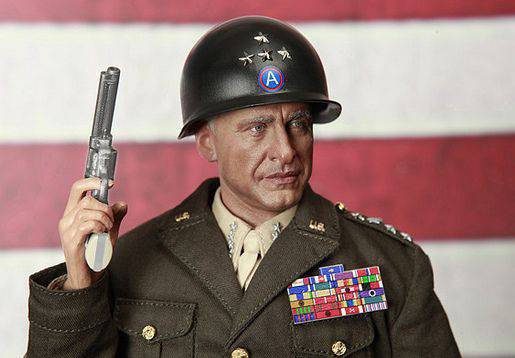 And, one wonders, why did he even need a revolver? 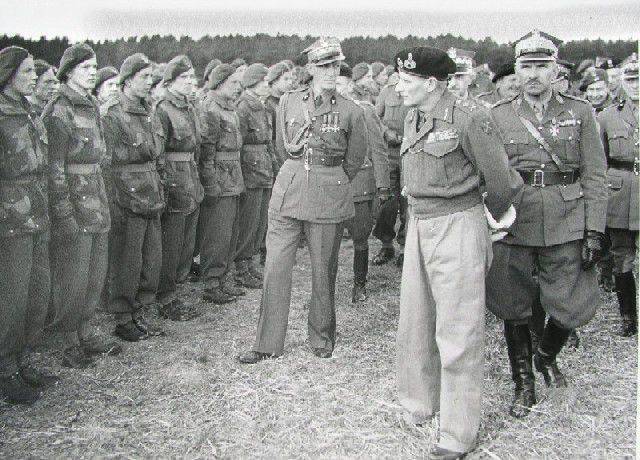 
By the way, it was for this very reason that the Egyptian pharaohs, equated with the gods, wore an apron like that of the last of the peasants. Purely intuitively, they understood that a small closeness to the people would not hurt them, and Napoleon, who did not part with his shabby hat, and Stalin, and Mao Zedong, and Pol Pot and Yeng Sari understood the same thing. “Ah, they are so simple!” - exclaimed other citizens, although if “the sovereign is simple”, this did not mean that he was “simple” in reality. Well, PR managers know that any little thing can work on the image of a person. For example, another American general, Douglas MacArthur, wherever possible, appeared with a cheap farm tube from a corn cob. Well, the general salary was not enough for Dunhill or Brier? But no, this is how he demonstrated his closeness to the people. Well, people do not need any difficulties, they buy it very willingly! 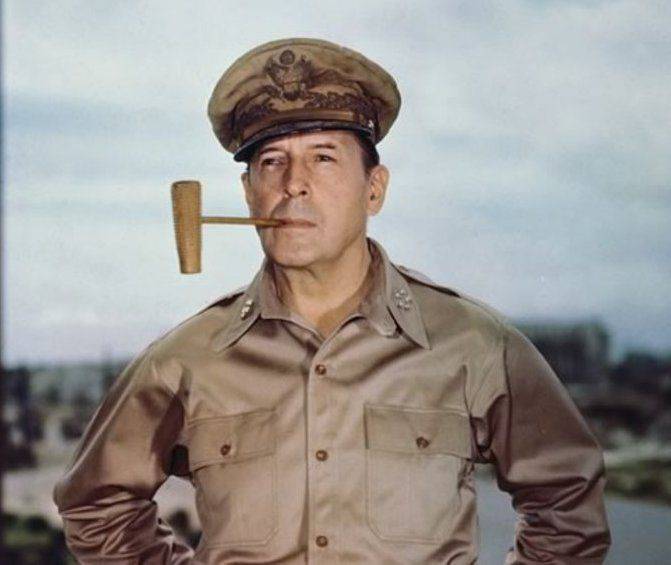 General MacArthur with his famous pipe

And here, by the way, an example from life. Somehow there was a contest for the best student male photo at my university. One of my students approached me and said that he wanted to participate and win. But how? I looked at his oval face, the Roman nose, and ... advised me to buy a “Sherlock Holmes tube”. He bought it, “took a picture” with it from a certain angle and ... got first place by the majority of votes cast for him. "What a man!" Ah! ”The girls sighed, and the guy didn’t smoke at all! This is how some "chips" act on weak minds!

However, the images are still sculpted by movies, and here we must particularly dwell on the movies made in Japan during the war years. There, with propaganda, everything was a little different than in the USSR, Germany and the USA. For example, patriotic leaflets were printed on the back of ... pornographic cards! What is it ?! A direct link - sorry to throw, but all the time to watch - stupid! So sooner or later, but you must read the text. 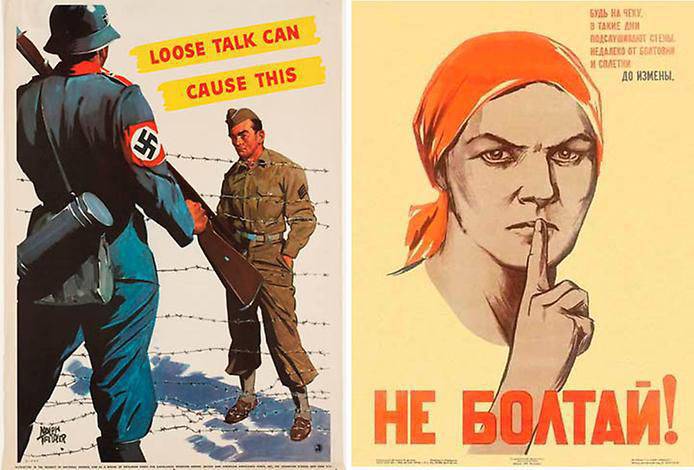 Soviet propaganda posters of the Great Patriotic War were more imperative, that is, agitated in a tone of order, for example, the famous poster “Do not chat!” Westerners were more “psychological”: “Because someone was chatting!”

So is the movie. In the Soviet films, made long before the war, our soldiers and commanders already shouted “For Motherland! For Stalin!". There were few films then, there were no televisions, they went to the cinema many times. Experienced ... and these words were people in the subconscious. And when the time came, they themselves began to shout. At the call of the heart! Nobody ordered! Revise the Soviet films of the time: "Homeland Calls", "Fourth Periscope", "Tankists", "Squadron No. 5", "Commandant of the Bird Island", "At the Far Outpost" and the most famous film from this series - "If tomorrow is war" . Interestingly, the internal enemies in these films, as a rule, had an intelligent appearance, wore glasses and always a hat. And, by the way, I still found the time when our citizens, who were stepping on each other’s feet in public transport, also humiliated: “I put on my glasses, but also wearing a hat!”. Hence the image of the "rotten intelligentsia", which remains in the mass consciousness until now!

By the way, research for PR purposes does not necessarily have to be “field”, that is, by means of a survey. It is enough to watch the Soviet movie of 30 of the XX century to get an idea of ​​the opposition between the Western, “Apollonic”, rational principle in culture and the “Dionysian” (Eastern, irrational) present in it (and society), the concepts of which are primarily in art , put forward Friedrich Nietzsche, who saw the ideal in the balance of these principles. Let us recall the film “Chapaev” and the famous “psychic attack” of the “Kappelevs”, for some reason dressed in the uniforms of the Kornilov regiment. Interestingly, in the first version of the film, the killed White Guards fell and very comically jerked their legs. And when Stalin saw this, then ... forbade them to show them ridiculous. And it is right! Purely intuitively, he understood that this was “bad PR.” In “Alexander Parkhomenko” (1942 year) we see the equally impressive attack of the German troops under the Brandenburg march, and the oncoming movement of the Red Army with the singing of the “Internationale”. And, finally, the quintessence of these techniques was shown to us already in the children's movie 1964 of the year - “The Tale of Malchish-Kibalchish”. It was also PR, and PR is excellent! And during the war years, the film was shot as masterly both according to the idea and execution of the film “At six o'clock in the evening after the war”. And after all, the war was still going on, and people had already seen what the winning salute would look like - again, the move is simply amazing from the point of view of the theory and practice of public relations. 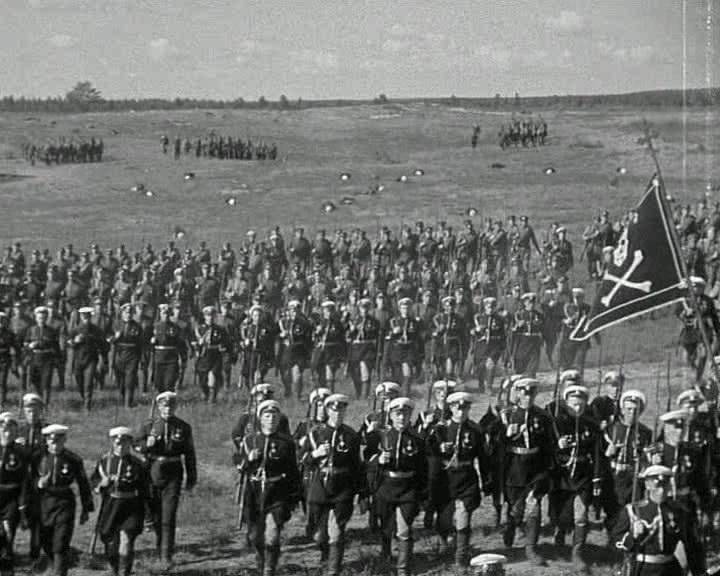 "Psychic Attack" from the movie "Chapaev" 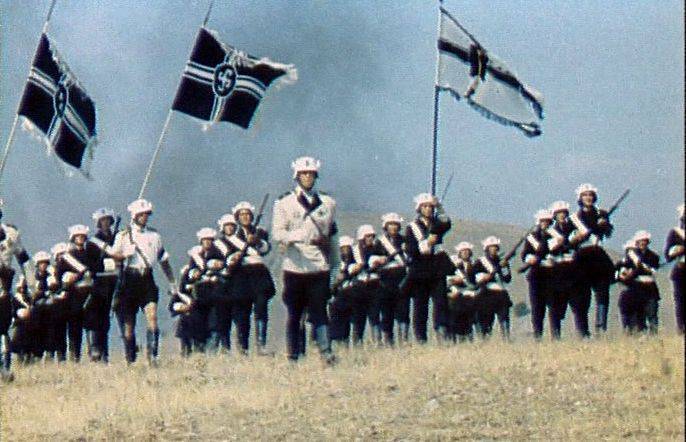 Burzhuiny go on the attack under the gramophone. In another way can not! Funny Yes, it is ridiculous, but this is how patriots should be raised. "The Tale of Malchish-Kibalchish" (1964 year)

It is interesting that some myths from Soviet cinema then very smoothly migrated into our life and even school and university textbooks. For example, the myth created by the S. Eisenstein film “Alexander Nevsky” about the drowning of knights participating in it in the lake. Interestingly, in the article by 5 of April 1942 of the year devoted to the 700 anniversary of this battle, there is not a single word about it, although excerpts from the text of the chronicles are given. That is, Stalinist propagandists understood that cinema is one thing, but scienceистория - completely different! Well, and then Bulgarian filmmakers made a very similar movie about their “patriotic” Prince Kaloyan, and there all his entourage except for laughter can not cause anything! Bad "PR", what to say! 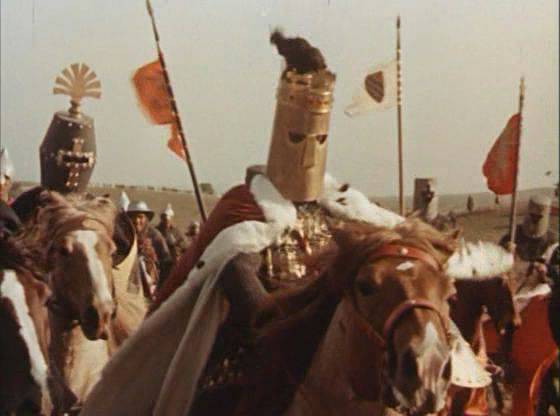 Crusaders attack the Bulgarians. Battle of Adrianople 1205 year. Shot from the movie "Kaloyan", filmed in 1963 year

By the way, during the war years the most “anti-war” was ... Japanese cinema, which is again connected with a special Japanese mentality. The plot of all films is about the same. A young man, for example, a student, has a reservation from conscription, especially since he has one mother. But ... he wants to go to the army and die for the emperor! His girlfriend discourages him, but he is adamant. As a result, he goes to war, the girl dies under the bombs, the mother dies of hunger (or vice versa!), And the guy lies on dirty straw in the barracks with gangrene from the wound and ... dies! On the screen the inscription: "He died for the emperor." When the Americans watched these captured Japanese films, they banned them from being shown as "the best anti-war films." After all, they had everything exactly the opposite: the hero goes to war, wins everyone, he is awarded, and the bride in white meets him at home. But the Japanese explained to them that this is just such a movie that inspires them to great deeds!

So a skilled PR manager must take into account the mentality of the nation and act accordingly. This is all the more important in the conditions of a total war, where even a small mistake costs enormous human and material losses. Moreover, an experienced PR person can even win a battle in which he did not participate. But about it - next time!