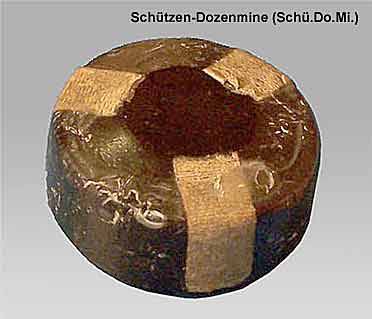 By the end of 1944, no one had any doubt that the defeat of Nazi Germany was a matter of time. The troops of the anti-Hitler coalition countries won over the city outside the city, causing serious damage to the enemy. Given the ever-worsening situation, the German command and industry had to look for new ways to supply the troops with the necessary weapons and technology, as well as form new structures.

In the last months of 44, the German command created the organization “Werewolf”, whose task was to be sabotage in the rear of the advancing troops. To conduct a guerrilla war, this organization required the appropriate weapons. At the beginning of 1945, the German industry created a new anti-personnel mine, which was supposed to be issued to the werewolf fighters. When developing a new ammunition, gunsmiths had to take into account the fact that fighters without special training would use it. In addition, the state of the industry placed special demands on the materials used.

The special "partisan" mine was not widely spread, which affected its fame. Among other things, this led to the existence of several designations. Ming for the organization “Werewolf” in various sources appears under the names Schützendosenmine (Schü.Do.Mi.), Schützendosenmine-Gross or Schü.Do.Mi. (g.) and Sabotagemine 70. According to some information, the mine had a “nickname” Salben-Busche (“bank of shoe polish”), but the existence of such a name gives rise to certain doubts due to the small spread of the mine.

The corps of the "partisan" mines Schü.Do.Mi. consisted of two elements: the main jar and cap, worn on it. The main body of the case had a cylindrical shape and was made by casting (bakelite) or by stamping (aluminum). In the central part of the bottom of the can was provided with a hollow tube with a thread at the bottom. Inside this tube there was a fuse and a cap.

It was proposed to put a round lid with a curved upper part on top of the case. There was a wide side on the side of the lid. In the center of the lid, on its inner surface, there was a cylindrical protrusion for interaction with elements of the fuse.

Mina Schü.Do.Mi. had a diameter of about 7-7,5 cm and a height of no more than 4,5 cm. The total weight of the product was 110 g and was slightly different for products with shells made of different materials. 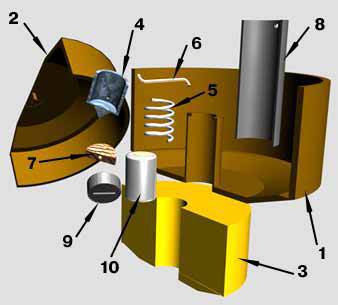 Mina consists of:
1.Case made of bakelite (Russian name phenoplast) or aluminum, which is a cylindrical jar, in the bottom of which there is a sleeve open at both ends. In its lower part, this sleeve has a thread.
2. Pressing the lid of bakelite or aluminum, repeating the shape of the case, nor having a slightly larger diameter, which allows you to put it on the case. From the bottom surface the lid has a short cylinder designed to prevent displacement towards the pressure spring.
3. The explosive charge in the form of figured pieces of extruded pentrite.
4. A steel impact hammer shaped like a cylinder closed from the bottom. At the bottom of the drummer has a percussive needle, and in the side surface through the horizontal drilling for shear combat checks.
5. Pressure spring.
6. Combat check, which is a piece of copper wire, bent at both ends. Cutting force checks 15 kg.
7. Steady wooden washer with through horizontal drilling. This washer is inserted inside the firing pin and is intended to abut the lower end of the spring and to separate the warfare checks from the spring.
8.Metal bushing drummer with through horizontal drilling in its upper part. It is worn on the sleeve of the case and is designed to accommodate and hold the drummer.
9. Threaded metal tube with slotted bottom.
10. Fuse, which is a closed aluminum cylinder that combines primer-igniter and detonator.
11. Adhesive connecting tape.

Inside the central tube of the housing were all the details of the fuse. For some reasons, first of all, the requirements for low cost and ease of production, it was decided not to use the fuses of existing models. Therefore, mine Schü.Do.Mi. received an original design fuse that has little to do with other products of this class. During the assembly of mines in the upper part of the hull tube was placed drummer, made in the form of a metal can without a lid with a needle on the bottom. A copper combat check was inserted into the side opening of the firing pin, resting on the upper section of the body tube. Inside a cylindrical drummer installed a small wooden tube, on top of which was placed a spring. At the bottom of the tube should be located primer, held in place by a stopper, screwed into the bottom hole.

The main charge of the ammunition was located around the hull tube. Due to the lack of a sufficient number of other resources, German gunsmiths had to load Schü.Do.Mi mine. pentrite. 70 g of this explosive were pressed into a cylindrical piece with a through hole in the center. When assembling, the checker was put on the casing tube and held in place only by friction.

At the factory, the charge of pentrite and elements of the fuze: drummer, check and spring were placed in the body of the future mine. In addition, a cork was screwed into the bottom opening of the body tube. The cover in place was fixed with adhesive tape on a paper or fabric base. In this form, mine Schü.Do.Mi. could be transported to the installation site. Since the mine was not equipped with any safety elements, the detonator had to be installed immediately before laying. No anti-recovery remedies were foreseen.

When preparing the mine for installation, it was necessary to unscrew the bottom plug, check the position of the impactor, and place the capsule inside the tube. Then the cork returned to the site and the mine was ready for installation. An interesting fact is that the slot in the traffic jam, with the help of which it was proposed to unscrew it from the case and put it back, had dimensions corresponding to the 50-pfennigovoy coin. Such a “tool” was supposed to be used when installing mines. The use of a screwdriver was not permitted. 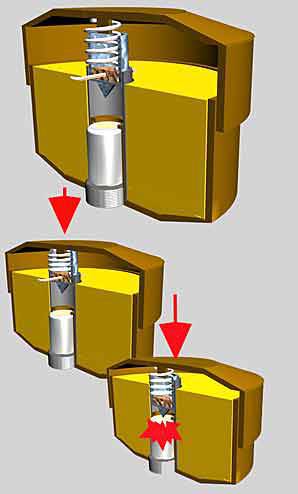 As an anti-personnel mine push action, product Schü.Do.Mi. could be used for mining various roads and objects. It was assumed that these munitions will be used both to defeat manpower and to damage various enemy vehicles. Exact information about the mass use of such weapons is not available. Some sources mention that the Luftwaffe fighters mined some runways and taxiways before leaving, but the details are unknown.

The principle of the Schützendosenmine mine was fairly simple, but of particular interest. In other anti-personnel munitions, ready-made fuses of a mechanical or chemical type, made as a separate part, were used. Schü.Do.Mi, in turn, received “integrated mechanisms” with an unusual principle of operation.

Mina Schü.Do.Mi. should have been triggered when you press the cover with a force 15 kg. At weak pressing the cover fell and compressed a spring of the drummer. With increasing pressure force, the spring was compressed completely and pressed into the internal cavity of the hammer. In this case, the upper rim of the hammer rested against the inner surface of the lid. The lid, continuing to move down, worked directly on the drummer. With a pressure of 15 kg, the side part of the firing pin and the body tube should have cut the copper check. After that, the released drummer shifted down under the action of the spring and hit the primer. The latter caused the undermining of the main charge.

Anti-personnel mine Schü.Do.Mi. it was equipped with a pentritic sword weighing 70 g. The use of such an explosive had an impact on the characteristics of the ammunition. It is known that pentrite has a rather high sensitivity to shocks, which requires careful handling. At the same time, the pentrite has a TNT equivalent of 1,66. Thus, mine Schü.Do.Mi. It was rather difficult to handle, but it had the capacity at the level of heavier TNT or melinitovy ammunition. 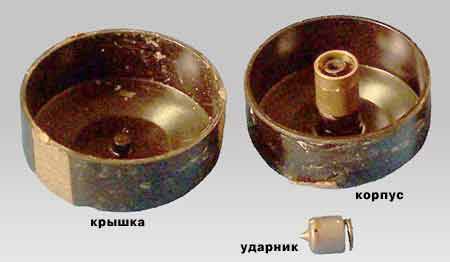 70 grams of pentrite should have been enough to cause serious injury to a person stepping on a mine. A shock wave from the explosion of such a charge could tear a person's foot and cause other injuries. The possibility of hitting people who were close to stepping on a mine was almost completely excluded. When used against vehicles, only damage to the wheels with the destruction of the tire was ensured. Tracked vehicles mine Schü.Do.Mi. did not cause any noticeable harm. To increase the destructive ability and perform various combat missions, the mine could be used as a detonator for other more powerful explosive devices, including the simplest design, up to the usual box with explosives.

The design of the mine did not allow neutralization and subsequent removal from the installation site. Schü.Do.Mi products should be destroyed on the spot. Neutralization was hampered by the fact that to remove the detonator, it was necessary to carefully dig up the ammunition and turn it upside down. After that, it was possible to unscrew the cork and remove the cap. In addition, the design made it possible to cut the adhesive tape and remove the cover with the subsequent removal of internal parts. For a number of reasons, this process was extremely difficult, so the mine should be undermined, not even trying to neutralize.

It is known that the production of Schützendosenmine mines began only in the spring of 1945. Accurate information on the production of these weapons is not available. Probably, in just a few weeks, Germany did not have time to produce more than a few hundred or thousands of mines. In addition, a large number of such weapons before the end of the war became the trophy of the advancing Red Army. There is also no reliable data on the use of such mines. Some sources mention cases of the mining of aerodromes, but there is no exact information on this.

Anti-personnel mine Schü.Do.Mi. It was Germany’s last attempt to create a new engineering ammunition. Seeing the difficult situation on all fronts and realizing the nearness of the end of the war, the German specialists began to develop weapons intended for partisan formations. The intended scope of application and the most difficult situation with resources and industry have affected the design of the new weapon. Nevertheless, all the measures taken were useless. Germany failed to start producing new mines on time and to start their full use. Certain groups of the organization “Werewolf” continued their activities for several months after the end of the war, but information about their use of the Schü.Do.Mi mines. are missing. Thus, there is reason to believe that the project of a mine for partisan formations did not fulfill its task and turned out to be useless.