The fire on the submarine "Eagle" and the lack of information

April 10 2015
33
Happy April 7 came from Severodvinsk news. In one of the docks of the ship repair center "Zvezdochka" a fire started. According to the first reports, there was a fire of some combustible materials on the K-266 “Eagle” nuclear submarine of the 949A project, which is currently undergoing repairs. Over the next few hours, the specialists of the enterprise and the staff of the Ministry of Emergency Situations were engaged in extinguishing the fire, during which they had to resort to emergency measures. Currently, experts are studying the scene and establish its causes. 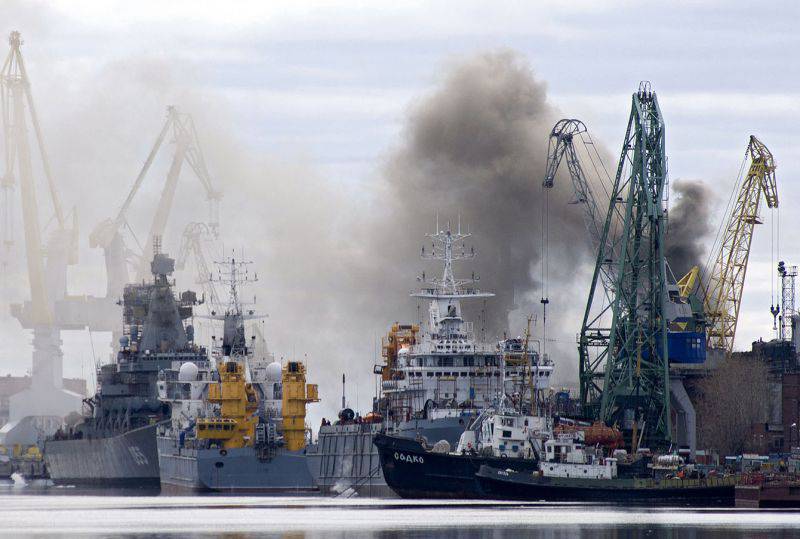 The fire occurred around two in the afternoon on Tuesday 7 April. According to the press service of the enterprise "Zvezdochka", the fire began during the hot work. In connection with this incident, the crew of the submarine and workers of the shipbuilding center left the submarine, so that no one was hurt. Due to the repair on the submarine "Eagle" weapons were absent. In the early stages of repair work, the reactor of the boat was shut off, and nuclear fuel was unloaded. Firefighting crews who arrived at the plant were engaged in extinguishing the fire. Already in the first message of the press service "Stars" revealed some details of the situation. So, it was reported that the fire occurred in the stern of the boat, in the inter-airspace. Burning rubber insulation coating.

For several hours, the fire brigade attempted to localize and extinguish the fire, but due to the specific design of the submarine, it was necessary to resort to non-standard fire fighting methods. At about six o'clock in the evening, it was decided to flood the dock with water. It was assumed that the water entering the dock would fall into the space between the hulls of the submarine and put out the fire. Soon the process of filling the dock with water began. According to preliminary calculations, the center of smoke was supposed to sink into the water around 21: 00.

About ten in the evening, RIA Novosti published statements by the Vice President of the United Shipbuilding Corporation Igor Ponomarev. He noted that smoke does not pose any danger. Completely eliminate it was planned in the near future. In addition, the news agency reported that the fire was localized on an area of ​​about 40 sq.m.

By the evening of Tuesday, the possible cause of the fire became known. With reference to the press service of Zvezdochki, the media reported that the ignition was caused by a violation of the welding technology. Because of this, inflammation of combustible materials occurred in the lower part of the stern of the submarine. By evening, it was possible to localize the fire and start extinguishing it. To eliminate the smoke, it was decided to fill the dock with water.

On the morning of April 8, the specialists of the Zvezdochka company ventilated the compartments of the submarine under repair, after which they inspected the internal communications, components and assemblies. Inspection showed that the possibility of re-ignition is completely absent. After the inspection, the draining of the dock began to carry out other work. Later, on board the submarines were supposed to arrive representatives of the investigating authorities.

On Tuesday evening, the Investigative Committee opened a criminal case on the grounds of a crime under Article 1 Art. 216 of the Criminal Code of the Russian Federation is a violation of safety rules in the conduct of work, resulting in negligence causing major damage. Soon it became known that an interdepartmental commission would be involved in the investigation of the incident. It should include representatives of the Ministry of Defense, the Ministry of Industry and Trade, the United Shipbuilding Corporation, the Krylov Research Center, and the Rubin Central Design Bureau. 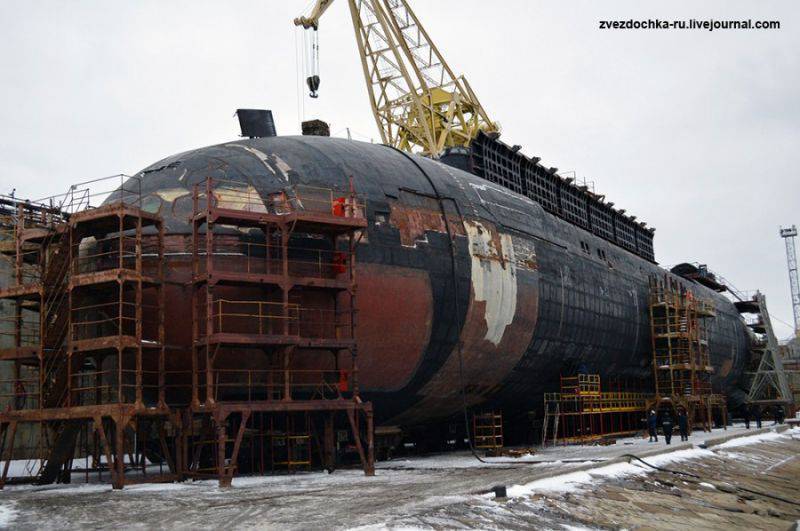 In the very near future, an interdepartmental commission should examine the site of the incident, examine the damage and assess the damage. While information on the completion of such work is missing. Moreover, on the night of April 9, it was reported that the interdepartmental commission was still unable to proceed with the damage assessment. The reason for this was the continuing pumping of water from the dock. As soon as the dock-chamber of the plant is drained, specialists from several organizations and departments will be able to start work.

For obvious reasons, the damage from the fire has not yet been determined. In addition, a plan has not yet been drawn up for repairs related to the recent fire. It will take some time to determine the damage and make new plans. Nevertheless, some information about further work on the submarine K-266 "Eagle" has already appeared. The management of the Zvezdochka ship repair center informed the Ministry of Defense that the existing contract for the repair of the submarine will be executed in accordance with the established schedule. Thus, the repaired boat will be back in operation in the fourth quarter of the year 2016.

It should be noted that the lack of official information on the damage and further work does not prevent the appearance of various estimates. Some individuals, apparently not directly related to Zvyozdochka, are already making assumptions and expressing their versions. For example, in the evening of April 7, the TASS news agency published statements by the chairman of the All-Russian Support Movement fleet Captain 1st Rank Mikhail Nenashev. In his opinion, a fire could cause hundreds of millions of rubles of damage. It will take at least several months or a whole year to repair damaged parts, assemblies and assemblies.

No less pessimistic estimates were published by Interfax. According to an unnamed source of this information agency, allegedly related to the shipbuilding industry, the submarine "Eagle" was seriously damaged. The source claims that part of the cable network burned out during the fire, and the shaft of the left propeller was damaged. Damage received system dive and ascent. All these nodes and systems now need repair.

On the morning of April 9, information appeared on possible plans of the Ministry of Defense concerning the future repair of the damaged submarine. The Kommersant publication, citing an unnamed source in the Ministry of Defense, said that the military did not plan to allocate additional funds to carry out repairs after a fire. According to the source, there is no fault of the Ministry of Defense in the incident, as a result of which it does not plan to allocate additional funding in excess of that established by the existing contract. Official confirmation or denial of this information has not yet been received.

Considering the versions published by the press, one should not forget that the interdepartmental commission and the investigators are just beginning to investigate the incident. It will take some time to study the place of fire, search for the causes and carry out all other work, in particular, the determination of damage and the preparation of a repair plan. Therefore, all damage estimates of hundreds of millions of rubles and repairs lasting about a year are premature and may be erroneous. Until the official information about the damage received by the submarine during the fire, and the assessments made by the interdepartmental commission, you should not trust the various publications and assumptions of experts.

The situation with the lack of information is perfectly illustrated by the example given by the press service of the Zvezdochka enterprise on a blog in LiveJournal. Representatives of the company note that the information from the Interfax source about damage to the shaft of the submarine propellers is not true. These parts were dismantled for repairs in February, and are currently far enough away from the dock, which could not have been damaged in a fire.

Currently, experts of the interdepartmental commission have just begun work on the injured submarine. In the near future they will have to examine all the damaged parts, determine the exact cause of the fire, assess the damage and do a lot of other work. In addition, the staff of the Investigative Committee will have to find those responsible for the fire and take appropriate measures. Exact information about the status of the submarine "Eagle" after the fire is not yet available, which is a cause for serious concern. Nevertheless, the Zvezdochka ship repair center intends to cope with all the difficulties and complete all repair work, including the restoration of the units after the fire, within the time limits set by the contract and hand over the boat before the end of 2016.

The nuclear submarine K-266 "Eagle" was built on the project 949A "Antey". Currently, the Russian Navy has eight such ships from 11 built: two submarines were previously sent for recycling, another one (K-141 "Kursk") was killed in the 2000 year. The submarine "Eagle" was laid at the beginning of 1989 of the year and transferred to the fleet in February 93. The main objective of this submarine is to find and destroy the ship groups of a potential enemy. In 2013, the submarine Orel arrived at the Zvezdochka plant for scheduled repairs. At the beginning of the next 2014, the submarine was placed in the dock of the enterprise. The purpose of the work is the replacement of some units, the repair of various systems and the general extension of the service life.

A few years ago it was reported that TsKBMT Rubin developed a new project for the modernization of the Antey submarines, referred to in some sources under the designation “949AM”. According to 2011 of the year, this project meant equipping the submarines with a number of new equipment and replacing weapons. Instead of 24 launchers for Granit P-700 missiles, it was proposed to mount universal launchers that could be used to launch Onyx and Caliber missiles. In case of weapons of the Caliber family, the submarine of the 949AM project could transport and use up to 72 missiles. According to some reports, up to 2020, six of the existing 949A submarines of the eight available should be upgraded.

Some sources claim that in the foreseeable future, six modernized Anteyevs will become one of the components of the maritime component of the non-nuclear deterrence system. During the twenties, these submarine missile carriers will be operated in conjunction with the new submarines of the 885 / 885 "Ash" project. Before 2020, the Russian Navy should receive the 8 "Ash". The main submarine “Severodvinsk” (the base project 885) already carries the service, in the next few years it is planned to build and include into the fleet seven more submarines built according to the updated project 885М. Thus, from 2020, the Navy’s non-nuclear deterrent system will be based on at least 14 Antey and Ash Trees.

According to some sources, the submarines of the 949A project are available in the Navy and have a great future. However, for this they need to undergo repairs and a rather serious upgrade with the upgrade of various equipment. In the case of the repair and upgrade of the K-266 Eagle submarine, such work may be associated with certain difficulties arising from the recent fire. However, according to Zvezdochka experts, they will be able to complete the existing contract on time. In the meantime, an interdepartmental commission and investigators are engaged in clarifying the causes of fire. They will be reported later, upon completion of all necessary work.