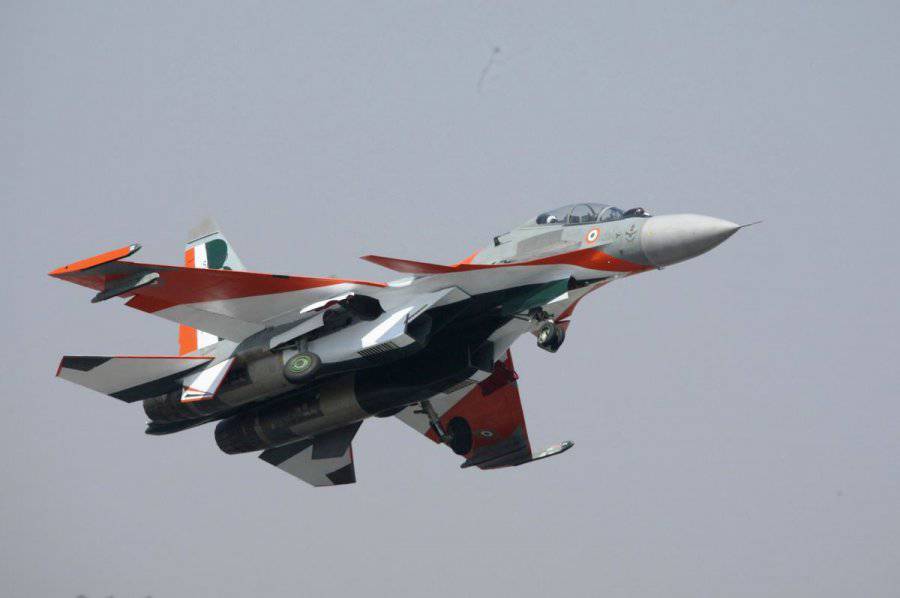 At the MAKS-2011 salon in August, many contracts were signed and more statements were made. There are so many of them that we can discuss until the next show, but for the time being we’ll dwell on one thing related to the Indian Air Force.

It has long been talked about the intentions of India to modernize or replace its fleet of “Su” family. There was little information in the public domain, and the lack of it gave rise to rumors and conjectures. But at the last salon it was stated that there would be a modernization, and it even became clear which one.

This was announced at the MAKS-2011 by Irkut Corporation General Director A. Fedorov. United Aircraft Company and Hindustan Aeronautics reached an agreement on the course and details of the modernization.

First, it became known that the Indian side intends to withdraw Su-30K fighters from the fleet, released in the middle of 90's. Their modernization to the level of generation 4 +, and even more so 5 is recognized as inexpedient. But since the planes have not yet developed their resource, they will not go to the scrap. The first 10 fighters have already been sent to Belarus, who wished to buy them, and the remaining 8 "obsolete" machines will go there in November-December of this year.
The Su-30K, according to the plans of the leadership of the Indian Air Force, should be replaced by the new modernized Su-30MKI.

Initially, the Su-30MKI modernization project was known as “Super Dry”, but at the MAKS-2011 showroom, the official name of the program was announced: “Super 30”.

Now India is armed with about a hundred Su-30MKI fighters. In the future, it is planned to increase their number to 250-300, but the most likely figure, according to statements by the Indian military, is 270 units. For reasons of state security, most of the aircraft will go to serve in the north-western regions of the country. A number of experts consider these actions of India as a response to the deliveries of F-16 aircraft to Pakistan and the latter’s plans to modernize the already existing fighters with the help of Turkey.

New aircraft will be built in the version of "Super 30". Already in service with India to reduce the cost of maintenance and unification of the park will be re-equipped in accordance with the new modification. The equipment of combat aircraft with new equipment will be implemented by the Indian side - the company "Hindustan Aeronautics", which already has similar experience.

The latest negotiations on the nuances of future modernization are still under way, and both sides - the Russian and the Indian - are already expressing the possibility of supplying fifth-generation FGFA fighter jets to India, based on the PAK FA T-50. In this case, "Super-30" will become a kind of transitional link of the Indian Air Force between the aircraft of the fourth and purely fifth generation. However, T-50 is still undergoing tests, and FGFA is in development and will fly no earlier than 2013-14 of the year.

Let's go back to the “Super 30”. Due to ongoing work to determine the exact appearance of the new aircraft, the final composition of the equipment is still unknown. But we will try to collect a picture from disparate sources.

"Super 30" will carry anti-ship cruise missile Russian-Indian development BrahMos. But the heavy weight of the rocket requires strengthening the fuselage of the airframe. For this reason, not all aircraft will be able to use BrahMos: only 42 of such carriers is planned. These “Super 30” will be able to use LRCM and Nirbhay missiles.

The possibility of using the last two types of missiles is a consequence of the policy adopted by the developers of the program on the use of non-Russian weapons.

All aircraft of the new series will receive a slightly modified glider with a special coating that absorbs the radio emission of the enemy radar.

The onboard electronic equipment "Super 30" will be almost completely updated. It is already known that the equipment will have the function of “transparent cab”. They will also replace computers of a number of systems and electronic warfare equipment.

The original H-0111М Bars radar with a passive phased antenna array will be replaced with a new Zhuk-AE radar with an active PAR. This radar development NIIP them. Tikhomirov has the ability to accompany 30 targets simultaneously and attack six of them.

Other details about the weapons and equipment that makes the Su-30MKI "Super 30", have not yet been reported.

At MAKS-2011, it was mentioned that the total cost of all modernization work could exceed 1 billion dollars. Already signed contracts for design work in the amount of about 300 million dollars. The development of the modernization program will last approximately one and a half years, and the terms of the full development have not yet been specified. According to estimates of Hindustan Aeronautics and the Indian Air Force, the first Super 30 should be operational by the 2014-15 year, although this is quite an optimistic timeframe.
Ctrl Enter