Massacre of Christians in Kenya and its organizers 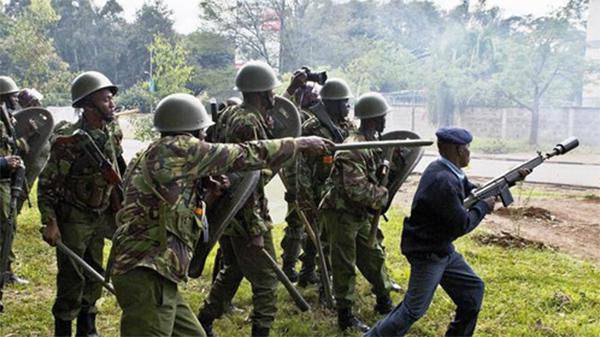 2 April in Kenya there was the largest terrorist act. Al-Shabaab militants attacked a university in Garissa (1), killing 147 people and injuring several dozen people. During the day, the terrorists held several hundred hostages, who were able to be released only after the special operation of the Kenyan authorities.

The terrorist act in Garissa became the next link in the terror that swept Kenya after the collapse of the statehood of Somalia and the creation of non-state territory there. One of the main terror forces in Kenya is Al-Shabaab, which is responsible for the largest hostage-taking and shooting at the Westgate Mall in September 2013, when more than eighty people died. The terrorist attack in Garissa reminds of the seizure of a shopping center in Nairobi. Al-Shabaab militants killed only those who called themselves Christians. Students who called themselves Muslims were released. The massacre of Kenyan Christians was organized on the eve of Good Friday before Easter on the Catholic calendar. 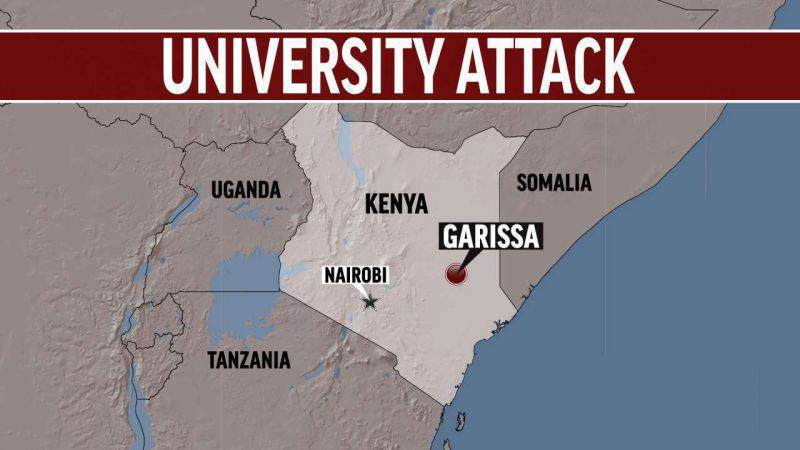 Al-Shabaab (2) is a Wahhabi-type terrorist organization, numbering between seven and nine thousand fighters, according to various estimates. If we compare the situation in Kenya with the situation in Nigeria, it turns out that the actions of Al-Shabaab are very similar to those of Boko Haram. Both organizations carry out terrorist attacks against Christians, making them as cruel as possible, and try to evoke a wide public response. As a rule, the effect is achieved by organizing terrorist acts in Christian churches and during great Christian holidays.

The Al-Shabaab attack in Gariss draws attention to several points. Firstly, Al-Shabaab is based in Somalia, which is practically beyond the control of the government. The “governments” and “presidents” succeeding 1991 of the year (3) do not fully control even the capital Mogadishu. Somalia is a territory where anyone can hide. In essence, today's Somalia is an international oasis of terrorism of all kinds. Secondly, the actual absence of a central government does not mean the absence of power at all. A number of power centers are operating in Somalia, which are fighting both with each other and with Al-Shabaab. The government supported by the African Union receives some assistance in conducting military operations against Al-Shabaab. (4) That is, Al-Shabaab militants should rather think about the internal struggle than to make bold and, by and large, meaningless attacks in neighboring Kenya. Why travel 200 kilometers from the border with Somalia to get to Garissa? Finally, thirdly, the actions of Al-Shabaab in Kenya seem meaningless in terms of the goals declared by this organization. It is hard to believe that Al-Shabaab hopes to Islamize predominantly Christian (5) Kenya. 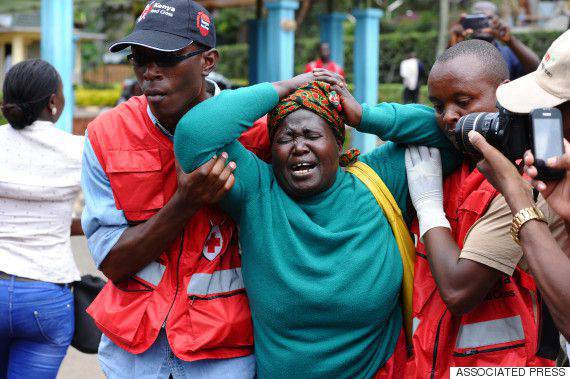 Then why these attacks? Comparing them with the actions of "Boko Haram", you see that the main thing here is the incitement of hatred. In this case, the hatred of Muslims. In this way, they want to blow up Kenya and Nigeria. It is not by chance that both these countries are under investigation by the International Criminal Court (ICC) - the leadership of both countries should not be able to radically stop the terror. In this case, the ICC charges with violations of human rights and, in particular, charges the leadership of Kenya in war crimes. Recall that the case against the current President of Kenya, U. Kenyatta at the ICC, was terminated only under pressure from the African Union, which threatened a mass withdrawal of African countries from the Statute of the Court. At the same time, the trial of Kenya’s Vice President at the ICC continues.

The beginning of mass terror in Kenya coincides with the advent of the country's success in industrial development. At the beginning of 2000's in Kenya, the oil reserves that the government donated to China were discovered. The terror directed by the forces that govern Somalia makes it possible to maintain permanent instability in Kenya. It is believed that the US military contingent in its operations in Somalia in the 1993-1994 years was defeated. However, there is reason to believe that in fact this operation was quite successful. The media portrayed it as a failure to disguise its real purpose - the creation of the first in the world and so far the only (at least on such a scale) non-state territory.

Metropolitan Hilarion of Volokolamsk in his famous report on the persecution of Christians in the modern world (6) said: “In Somalia, one of the martyrs of our day lived Murta Farah. This 17-year-old girl at the end of November 2010 was shot for converting to Christianity just 200 meters from the house where she lived with relatives. Earlier, Murta ran away from home after her parents, upon learning that she had converted to Christianity, severely beat and tortured her, forcing her to return to Islam. Murta's parents, trying to force her to renounce Christ, tied a young girl to a tree during the day, and at night put her in a cramped dark room. But their efforts were in vain. Then Murta's parents decided that she was crazy and tried to “treat” her with special medicines, but in May of this year she managed to escape from them. According to eyewitnesses, her parents may well be involved in the murder of the girl, since the so-called honor killings committed by relatives in relation to family members who have converted to another religion are common in Somalia. ” (7)

These days we have witnessed the martyr death of 147 by Kenyan boys and girls who have called themselves in the face of death by Christians. Let's face it: in the plans of global forces seeking to total destabilization of Kenya, Nigeria, other countries that have embarked on the path of independent development, these victims are most likely not the last ...

(1) Garissa City is located approximately 400 kilometers east of the capital, Nairobi.
(2) The full name is Harakat al-Shabaab al-Mujahideen ("The Movement of Young Mujahideen"). (
(3) The overthrow of President Siad Barre.
(4) Report of the UN Secretary-General on the situation in Somalia. January 2015 of the year // UN document: S / 2015 / 51 // http://daccess-dds-ny.un.org/doc/UNDOC/GEN/N15/017/06/PDF/N1501706.pdf?OpenElement
(5) Christians make up more than 82 percent, Muslims make up just over 11 percent of Kenya’s population.
(6) Hilarion, Metropolitan of Volokolamsk, “The Persecution and Discrimination of Christians in the Modern World: Causes, Scope, Forecasts for the Future” // https://mospat.ru/church-and-time/831
(7) 3 of April, the Minister of Foreign Affairs of Russia announced that he had not forgotten about persecutions of Christians around the world, and confirmed the inclusion of this issue on the UN agenda // http://www.fondsk.ru/news/2015/04/03 /lavrov-podtverdil-vnesenie-v-oon-voprosa-o-neobhodimosti-zaschity-hristian-32583.html