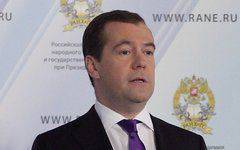 The Russian government, nevertheless, condescended to a substantive discussion of a really painful, even before all the sanctions, topic - the notorious import substitution.

The government commission on this issue, as it became known the day before, will be headed personally by Prime Minister Dmitry Medvedev.

The unprepared reader will hardly find as many as three examples of irony above. Then open the cards immediately.

First of all, “it didn’t go away either ...”: President Vladimir Putin wrote about the need to force out imported goods with worse analogs from domestic producers, and wrote in one of his electoral articles, and spoke many times from the rostrum to different audiences. Including in the presence of Dmitry Anatolyevich. And already against the background of the “war of sanctions” this topic in general became almost the “1 number”, but, obviously, our “White House” was still on the agenda much more urgent.

Secondly, if we are to believe the vice-premier Dvorkovich’s announcement, it’s about the commission, which will finally begin to think about the strategy of import substitution itself. Whereas, if in a good way, it should have already been developed and not necessarily with the participation of any commission, but should have already spoken about concrete steps to implement it. But where are we to rush, right?

Thirdly, the commission will preside over Dmitry Anatolyevich Medvedev to talk, argue and something like that. On the scale of the current real influence of the Cabinet on the life of the country, this is certainly a great honor. But it is unlikely that the prime minister himself has illusions about his own real weight in the real nomenclature of decision-making.

This, of course, does not mean that the resolutions emanating from Krasnopresnenskaya Embankment are copied and distributed along the restrooms of the Presidential Administration and the Federal Assembly, but the scale of the problem, and even painfully protracted, is somehow incomparable with will be decided.

However, let us pay tribute to the prime minister: Dmitry Anatolyevich, to all appearances, himself doesn’t feed himself with any special illusions about the prospects for solving the problem of import substitution. In any case, this is how one can interpret his words about the uselessness of absolute import substitution: “This is impossible. This is the opposite extreme.

It sounds reasonable, but not from the mouth of the prime minister, who, if he has been entrusted with the task, is without reservation. How much global import substitution should be - let the expert community, journalists and grandmothers on the benches argue. But it seems that the government should set the maximum bar for solving problems.

However, weren't we presented too much?

In a conversation with a KM.RU columnist, political analyst, chairman of the Development Movement, member of the Federal Council of the “Party of Affairs”, Yuri Krupnov, pointed to the hopelessness of the current talk about import substitution:

- Import substitution is inherently a false slogan. It can be considered only as one of the mechanisms of new industrialization. Over the past 25 years, our country has been deindustrialized and today we actually exist in a semi-colonial mode, when the same Volkswagens are assembled with us "screwdriver", according to Western technologies.

In order for us to regain the ability to develop technologies ourselves and produce high-quality things, we must finally begin to carry out a new industrialization. The one about which Putin speaks over the past four years. We remember all this talk about 25 of millions of high-tech jobs and more. And in this huge complex of measures, import substitution is only one of the directions, or rather, one of the mechanisms.

But no matter how much Putin talks about this very “new industrialization”, our government simply refuses to understand it as a fundamental, fundamental question. Well, well, that at least there is talk about import substitution, at least something, but where do we get the productive forces from? What to replace?

These productive forces need to be restored, created. And without this, we have the fact that European goods are simply replaced by Chinese or Latin American goods. But this is not an import substitution, but a substitution inside the import. And discussing it in all seriousness is simply impossible. in my opinion.

Work on new industrialization should be strictly centralized and subordinated directly to the head of state. I would suggest creating an industrial policy council under the President of Russia and, with him, organizing a project office, the “modern Gosplan”, working on the basis of indicative planning.

Without this, all the talk about import substitution, about industrialization, about abandoning the “oil needle” will remain empty talk. But in a crisis situation, when our geopolitical competitors are not asleep, all this has a very specific, criminal definition - criminal negligence.