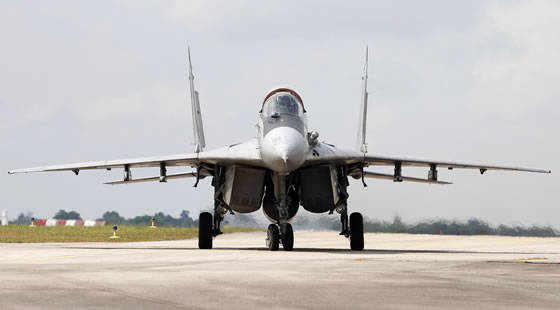 The Malaysian Defense Ministry is not planning to buy new fighter aircraft in the near future to replace the MiG-29H fleet, said Minister of Defense Ahmad Zahid Hamidi.

At the same time, A.Hamidi noted that the ministry will conduct an assessment of multi-purpose combat aircraft in order to determine possible options for their purchase in the future, the New Straight Times reports.

The minister said that the government intends to implement more important projects as part of the Malaysian 10 th defense plan. Aircraft MiG-29Н, he said, will be replaced when the need arises.

The media, citing official sources, have repeatedly reported that the Malaysian Ministry of Defense is exploring the possibility of replacing the fleet of MiG-29Н fighters purchased in 1995. This program in the framework of the re-equipment of the Malaysian Armed Forces was considered one of the priorities.

Ahmad Zahid Hamidi noted that the Ministry of Defense will continue, as part of the 10-th defense plan, to purchase other military equipment, including second-generation patrol ships for the country's Navy.

According to reports, the preparation for the tender for the purchase of new fighters has been conducted since December 2010. It was expected that the tender will be officially announced during the international exhibition LIMA-2011 in December 2011. In this exhibition, as previously reported, the participation of all potential applicants is expected.

According to reports, requests for information were sent to applicants at the beginning of this year, and by March 30, companies submitted their preliminary proposals.

The next step should be to send the Malaysian Armed Forces to bidders for proposals for proposals with a view to obtaining more detailed information on the supply.

The Malaysian Defense Ministry planned, in 2012, as a result of a tender, to place an order for the supply of new aircraft to equip one squadron, which, by 2015, should replace those in service with MiG-29Н.

Malaysia's Air Force commander, General Rodzali Doud, announced this June that the Air Force is considering the possibility of purchasing modern fighter jets from 12 to 18.

In order to unify the material support, support and training of personnel, the ideal option is to have no more than two types of combat aircraft in the Air Force.

Currently, the Malaysian Air Force has X / NUMX F / A-8D fighters delivered at the start of the 18s, and an 1990 Su-18MKM, the purchase contract of which was signed in 30. Given the long-term operation of the Su-2003MKM and F / A-30D aircraft, the chances of winning the Su-18MK and Super Hornet in the planned tender were evaluated by experts as more preferable.

Aircraft MiG-29, acquired by Malaysia in 1993, are used as part of the Malaysian Air Force as an air defense interceptor fighter. Of the 18 machines purchased, two MiG-29s were lost as a result of accidents in 1998 and 2005. The main reason for the need to replace the MiG-29 Malaysian Defense Ministry called the ever-increasing cost of their maintenance and operation.

As part of this contract in 1995-1997. A Russian-Malaysian ATSC (Aerospace technology system corporation) joint venture was organized for the maintenance, repair and upgrading of fighters. In 1998-1999 work was carried out on the modernization of the supplied machines (in the amount of 34,4 million dollars). This work included the installation of an improved H019M radar, an increase in fuel tanks, the installation of a retractable rod for refueling in the air, an increase in the combat load, and the introduction of air-to-air SS-77 armament. The modernization made it possible to include in the armament of the Malaysian MiG-29 X-20 air-to-air guided missiles with GOS TV and transfer them to the class of fighter-bombers. In addition, in 1995, Malaysia imported 29 РВВ Р-131Р27 and 1 Р-216 from Russia to equip MiG-73 from Ukraine.

Ctrl Enter
Noticed oshЫbku Highlight text and press. Ctrl + Enter
We are
Innovation Day of the Southern Military District: armored car Ural-63095 "Typhoon-U"The 20 rating of the largest arms deals, decisions on which were made in 2012
9 comments
Information
Dear reader, to leave comments on the publication, you must to register.