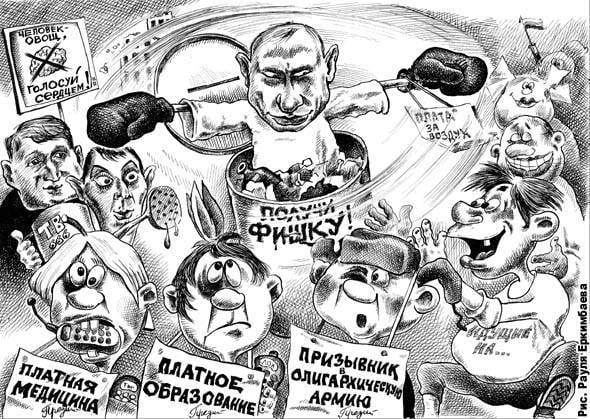 It will not be about the grandmother, reformed by the reforms, as well as domestic media to the level of crazy, minting to the polling station by eight in the morning, to vote with reverence and joy either to another protege of Western special services, or to a representative of the robber business.

Let's talk about cattle elitist, endowed with intelligence, about those who in past centuries were called social mob, who, standing "eagerly crowd at the throne", licked heels of power, lost the war, stifled freedom, hunted geniuses, bathed whores in champagne, ruined Russia with multimillion loans and plundered it in black. That is why antibydlov riots and even revolutions sometimes broke out in our country. However, cattle is immortal, like a mafia. It flows from epoch into epoch, like mercury, being every time in a new hypostasis, in different decorations.

What about the scenery? Banknotes, real estate and the integrity of their own skins. These are the three fundamental symbols of the Bydlovsk faith. Therefore, cattle fiercely hates Orthodox morality and the Orthodox mentality as such. Together with Orthodox values, he hates Russia - the main carrier of these values. And loves cattle:

a) a market where you can buy and sell everything for money, up to a concrete embodiment of such moral categories as love, honor, conscience, patriotism;

b) the West, because it is the largest and richest market in the entire Earth;

c) universal values, for they are at the same time market values;

d) privately owned property, because there is no market without property;

Cattle loves humor below the belt and the Mummery on the stage or in front of the cameras, where it "comes off" in full, ripping the vulgarity off the stage or on the air. Another cattle loves to spoil their neighbors, stand with a candle in the temple, come from at least the princes of Meshchersky, drink beer with lobsters and have unconventional sex. The latter circumstance gives rise to some poorly educated Russian people to confuse representatives of the Bydlovsk caste with gays. And I, a sinner, am also confused because of lack of education. I have only Wittenberg behind me. Not that they have Harvard.

Cattle is rich. I remind you that they robbed the richest country in the world - our country. To preserve power, cattle hired a whole host of egg-headed political scientists, curly TV-presenters, and much faded, but still popular comedians — the court jesters of the regime. This whole company firmly holds the people for the soul, nevertheless, the earth begins to slowly smolder under the feet of cattle, and for this reason it often has to put on the mask of patriotism on its obscene fur. This is the very patriotism that is the "last refuge of the villains."

Today’s cattle, unlike yesterday’s cattle, actively speaks on radio and television with patriotic speeches, publishes in the periodical press a mass of patriotic articles, not ashamed to subscribe to its true name. But in the media anonymous and do not greet. Another thing - the Internet! Here you can and without a signature. Here you can be yourself. There are a great many such "essays" now "floating" on the Internet. I fished out one of them as a sample ...

"One of the stable myths that exists in Russia is the myth of some special, mysterious" Russian soul "," high spirituality of the Russian person "... The whole disgusting Russian история and life to this day proves the opposite: in the actions or inactions of Russians, spirituality is the least of all, and there are animals unfounded rage and cruelty, servility, lack of principles, venality, stupidity, bad taste ... True to Russia is a lie ... Russians are just they do not strive for truth, do not seek it and do not fight for it ... The sense of personal human dignity is in embryo with the Russian ... The spiritual sphere does not interest the Russian ... The venality of the Russians has no limits ... It is known that in Russia often send They put their own daughters on the bar for a bottle of vodka. All the mystery of the Russian soul is reduced to the animal state of its owner, and this soul is quite predictable and even primitive ... "

The reader, obviously, has already guessed where the wind is blowing from. This scribble was probably made up by a gay cattle, who sat in front of a mirror and did not make a self-portrait, shaking from hatred for a great people who were in trouble by the mercy of this very gay cattle precisely because of their gullibility and openness. Anonymous has an obvious inferiority complex. He does not have and never had a boundless country that has "spread out half the world." The cattle never had and never will have Pushkin, Dostoevsky, Chekhov, Tolstoy, Tchaikovsky, Sviridov, Surikov and Vasnetsov.

If you dig deeper into history, it turns out that cattle is in all nations. Read what Shakespeare writes about the English cattle of the Renaissance:

I call death, unable to see more,
How a decent husband perishes in poverty
And the villain lives in beauty and hole,
How does the confidence of the pure souls hang around?
How chastity threatens shame
How honors are given to the bastard
As the power of niknet before arrogant gaze,
As everywhere in life triumphant rogue,
As the art of arbitrariness mocks,
As mindlessness rules the mind,
As in the clutches of evil painfully languishing
All that we call good.

Further, Heine about German cattle: "The population of the city of Göttingen can be divided into students, professors, philistines and cattle." And, finally, Jack London about the North American cattle: "All you need is to rob your neighbor to the best of your ability, and on this basis you imagined yourself to be freedom fighters ... You are very ordinary rogues and moneymakers, but under the magical effect beautiful phrases are ready to make themselves patriots. You betray your thirst for profits from pure egoism as disinterested concern for suffering humanity. " Is not it true in our days?

Of course, we, Russians, also have our own national cattle. Rather, anti-national. This is where the most significant difference between our cattle and cattle abroad lies. Their cattle are bred in the womb of marginal nationalism. Ours has long been displeased with the gay cattle: together they betray, torment, take away Russia ...

During the war years, cattle hid their elite rectum in Alma-Ata. And at this time, Russian guys fell on the embrasures of enemy pillboxes (Matrosov’s feat was duplicated 60 times), rushed under the fascist Tankstied with grenades, burned alive, ramming German planes. Today, the Bydlovsky anonymous writer writes about Russians as follows: "The words" truth "," justice "," humanity "for them are abstract concepts, an empty phrase. They are used by them only when it comes to their personal, selfish interests."

In 1945, former French Prime Minister Edouard Herriot, who was removed from a nazi concentration camp by Soviet soldiers, sobbed, clinging to the gray Russian overcoat smelling of sweat, mahr and gunpowder, and not getting tired of repeating: "Thank you, Russian soldier!" This very Russian soldier, saving his great country from the bearer of Western civilization, saved humanity and Europe. Along the way, he saved the gay cattle, which, had it not been for Russia and the Russians, would have long been the smoke of crematoriums. Gay cattle, like any other cattle, a sense of gratitude is unknown because of congenital rudeness. It continues to crap and crap its savior - the Russian people ...

"Are you not a xenophobe, Rostovtsev?" - may ask the reader. What kind of xenophobia! Imagine a Chinese who, having woken up one morning, will find that all of his announcers, TV presenters and observers are Japanese, that his children are learning their native history and literature on textbooks written by Papuans, Malaysians, Laotians and Cambodians, government agencies are staffed mainly by foreigners. "Guard!" - the Chinese would scream and, like Comrade Mao, would go to the mountains to start a national liberation war from there.

The former Sochi card sharper, who wiped out the wallets of wealthy spa visitors in the near youth and who had eighteen (!) Drives to the police in this connection, has now become a major right-wing politician. In a televised discussion, he hinted that the Russian people lack the mole of gray matter, because they are constantly bypassed on bends by non-Russian people. Kinky goat, one of the organizers of the default 1998 of the year, again confused the mind with villainous. He got away with it all, because while his friends are in power.

I would like to recommend the cattle not to shun the repetition of the traversed, but to dig out the original text of the Russian folk song "Dubinushka" in the archives and read it carefully. If bydol after that will have terrible dreams, then I will be satisfied.

R.S. I write these lines, referring to the descendants: do not let the cattle to study at universities, especially in overseas, because, having learned, it will inevitably begin to implement idiotic reforms, leading to nowhere. Remember: according to psychiatrists, the gay cattle morons are seven to eight times more than other peoples of Russia. Therefore, the cattle must be located at the bazaar and sell broiler chickens, pasties, Moskovsky Komsomolets newspaper, flowers and dolls there. There, at the market, he, cattle, the place.

We are in Yandex Zen
The world we leave, the world we enter, and the world between them
The phenomenon of the Russian people
5 comments
Information
Dear reader, to leave comments on the publication, you must to register.