The Hague yearns for Slavic blood 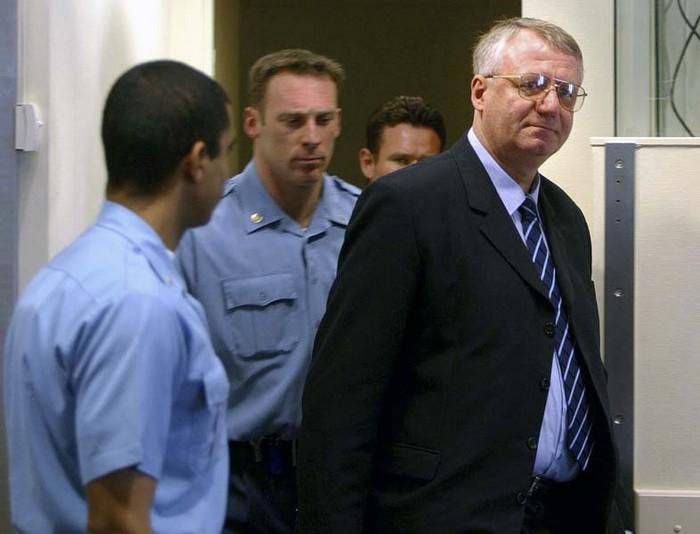 The most pro-Russian of the current Serbian politicians - Vojislav Seselj - spent almost 12 years in prison of the illegitimate Hague Tribunal. Even the Western judges themselves are forced to admit: this is a record period of preliminary detention. For all these years, the rebellious Serb did not manage to pass a sentence. It turned out to be impossible to prove his guilt for lack of such. The tribunal, in order to somehow justify finding a politician behind bars, made only sentences for “contempt of court”, conferring on the accused 15 or 18 months of imprisonment. (For what can this thoroughly biased court be respected, if it was created in violation of the UN Charter and does not even want to consider NATO bombing Serbia?)

Formally, the purpose of the Hague Tribunal is to punish war crimes in the territory of the former Yugoslavia, but in fact this body plays only one single role - the massacre of political and military leaders of the region, disliked by the West. Especially - over the Serbs.

The ex-prosecutor of the tribunal - the sad and notorious Carl del Ponte - in her memoirs recalled that the criminal case against Vojislav Seselj was initiated only because the “great democrat” Zoran Djindjic had asked her to. This pro-Western politician, who at that time occupied the post of Serbian Prime Minister, fully submitted to the executioners of his country and was afraid as fire of his opponents-patriots. After S. Milosevic, who was extradited to The Hague in violation of the Constitution, the leader of the Serbian Radical Party presented the greatest danger to the “democratic” regime that seized power. It was necessary to get rid of it at any cost. Without waiting for the violent dispatch to The Hague, the 24 of February 2003, the politician voluntarily went to trial.

So, who became a victim of political violence, Šešelj served a long time in prison without any serious reason. There could be no reason - in the years when Yugoslavia resisted NATO, he did not occupy any significant positions and could not make decisions. He is accused of "inciting ethnic hatred," blaming the organization of volunteer groups, but failed to prove anything.

Having lost his health in the dungeons, being terminally ill, he was finally released. As stated in The Hague, for humanitarian reasons. But in fact, the Hague Judgment and Humanism are two opposite things. That show further events.

The Hague watches every step of a man who has escaped from its gloomy walls. The European pseudo-humanists did not like the fact that Seselj decided not to be silent and not to give up political activities. So, 11 March, he came to the grave of the legitimate President of Yugoslavia Slobodan Milosevic, who was killed by this same Hague tribunal. And March 24 - on the anniversary of the NATO aggression against Yugoslavia - took an active part in the anti-NATO rally in Belgrade.

By the way, the Serbian authorities tried to ban this action. But you can't kill people's memory. The people still went out into the street, and the police did nothing against the assembled - apparently, the authorities themselves were ashamed of their ban.

A rally to commemorate the victims of the NATO bombing took place outside the General Staff building in Belgrade. Its participants burned the flags of the United States, the European Union, as well as the illegal puppet pseudo-state of Kosovo (seized its sacred territory from Serbia, where today Albanian terrorists are reigning with the full support of the West). In addition, the protesters were holding the flags of Russia and New Russia.

Speaking to the audience, Vojislav Seselj said that Serbia does not need to join either NATO or the EU, despite the desires of the current authorities.

Of course, the statement was sharply displeased by The Hague, as well as by some of those who are in power in Serbia itself. Now the Hague Tribunal declares to cancel the decision on the release of Seselj and wants to return him to jail, despite the severe disease (cancer).

And here double standards are clearly manifested. Thus, one of the defendants of The Hague was the warlord of Albanian terrorists operating in Kosovo, Ramush Haradinai. This type of person personally participated in the torture of prisoners and in the rape of women, he was implicated in the scandal with trafficking in human organs. But, being temporarily released before sentencing, Haradinai engaged in political activities, and this did not cause any questions in The Hague. During this time, while he was free, many of the prosecution witnesses were killed. Then Haradinaj was completely acquitted, although the tribunal was forced to admit that the crimes had indeed been committed. Only now the leader of the terrorists, enjoying the patronage of the West, "is not responsible for them."

In the 2007 year, the Hague court refused even Sheselj to be temporarily released to attend the mother’s funeral (although, again, some of the accused were released to mourning events).

Now, the NATO "prosecutors" is not enough that the man has already served without any grounds for about 12 years. Not only did he live, perhaps, not so long. It is not enough for the death tribunal in the former Gestapo prison of Slobodan Milosevic, as well as other Serb defendants - Slavko Dokmanovich, Milan Kovacevic, Milan Babich ... The Hague again craves Serbian blood.

Seselj himself said that he wouldn’t return to the walls of the tribunal voluntarily, but the prison doesn’t scare him: “If I could sit 12 for years in prison and did not give up, I can endure 12, 20 or 100 years” “My fate completely depends on the decision of the authorities,” he added.

Serbian authorities expressed outrage at the demands of The Hague. Foreign Minister Ivica Dacic said that this perfidious and scandalous decision of the tribunal threatens the stability of the country.

However, the question is how long the stamina of the current Serbian authorities is enough. So far, they are pursuing a half-hearted policy - on the one hand, they don’t want to be very Western puppets (the people will not understand), on the other - they are afraid of the disfavor of the United States and Europe.

It must be emphasized that the current President of Serbia, Tomislav Nikolic, was once in the same party with Vojislav Seselj. We can safely say that, by voting for him, the Serbs actually voted for Seselj, who was in the prison cell in The Hague and could not personally take part in the presidential elections.

The split in the Serbian Radical Party occurred because of the difference in positions on the country's accession to the EU. Seselj was against, Nikolic wanted to Europe (despite the fact that this same Europe, together with the United States, only recently subjected the country to brutal bombardment).

In the event that the authorities decide to give Seselj, it will be a monstrous betrayal. It may be even more cynical than what Djindjic had once done by extraditing the legitimate President Slobodan Milosevic to the illegal tribunal. Because Djindjic was an enemy of Milosevic, and Nikolic was a colleague of Seselj.

Traitor Dzhindzhich ended his life very sorry - 12 March 2003, he received two lead "pills", from which he headed straight to the ninth round of Dante's hell. This should be remembered by all those who shamefully intend to extradite their compatriots for reprisals against their enemies.

It seems that the Serbian authorities do not want a new shame. But they go though on a smaller, but also a shame. A criminal case was opened against Vojislav Seselj in Serbia for burning the flag of Croatia. The hero, who suffered for the Fatherland, is being prosecuted for such an insignificant reason. Persecution by the authorities, headed by a man who rose to his own authority.

Meanwhile, the American ambassador to Serbia, Michael Kribi, allowed himself a very dismissive statement about the Serbian people. On the air of the “democratic” TV channel B92 - something like ours (more precisely, not ours at all) “Rain” - Kribi said that the Serbs are “a little schizophrenic”. They were honored with such a characteristic because they are far from unanimous in wanting to Europe, and dare to look to the East (I mean, to Russia). But Russia did not bomb Belgrade. And it’s not Russia who arranges a trial over those who defended Serbia or even simply called on her to defend. The Serbian Radical Party demanded that the US ambassador be declared persona non grata. The authorities are silent.

Ctrl Enter
Noticed oshЫbku Highlight text and press. Ctrl + Enter
We are
On the role of personality in history. The victory of Vojislav Seselj over the Hague TribunalGreat victory over the Western Inquisition
Military Reviewin Yandex News
Military Reviewin Google News
54 comments
Information
Dear reader, to leave comments on the publication, you must sign in.