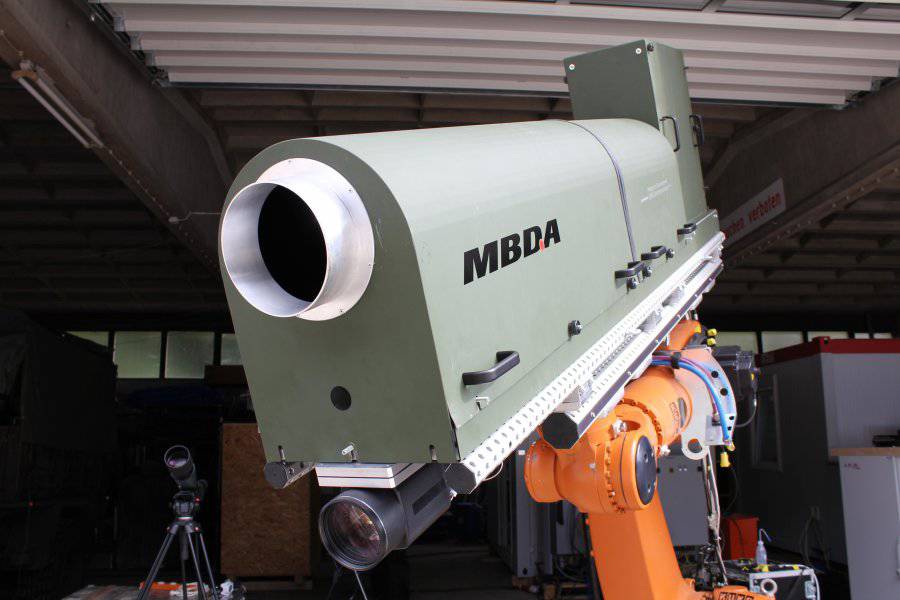 As a result of the test, the probability of pointing a 10-kW laser beam at a target located at a considerable distance was proved. At the moment, successful "shooting" from a prototype laser gun has already been carried out. The purpose of such a gun is the ability to intercept unguided and remotely controlled artillery shells, rockets and mortar shells.

The 10 kW power beam was first aimed and held for a few seconds on a moving target, which was located more than two kilometers from the point of guidance. Apparently, the test carried out personally proved the ability of the MDBA laser-guided installation system of the MDBA company to accompany objects in the environment that move at a height of 1000 m and at a distance of 2300 m.

The result exceeded all expectations, since the protection against tactical weapons This is no longer such a simple task: due to the high maneuverability of rockets and projectiles, their small size requires very fast interception (in just a few seconds) at a distance more than 1000 m from the target. The laser for this purpose fits perfectly. But they cause certain difficulties, accuracy of guidance and the ability to impart energy, which is necessary for the elimination of a projectile or rocket. But still, as practice has shown, the laser beam is probably the only type of weapon that is able to effectively deal with fast-moving targets at a distance of 1000-3000 meters.

The company “MDBA” successfully demonstrated unique methods of beam guidance and their effectiveness. As a result, after the United States, Germany became the second state to achieve significant success in research and development of an anti-missile laser. Now the “MDBA” is looking for a site for mounting a C-RAM laser and is working on increasing the beam power and upgrading the guidance system.
Ctrl Enter

We are in Yandex Zen
Laser quest
Program Terra-3 - complex 5Н76
5 comments
Information
Dear reader, to leave comments on the publication, you must to register.