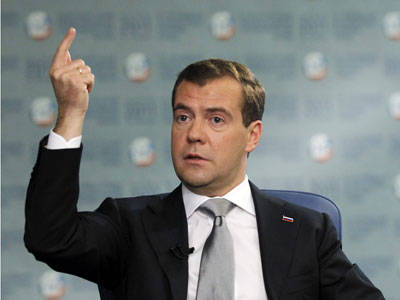 For the past three years, we have only heard this sublime word "modernization." Our current President Medvedev is using him both out of place and out of place. When domestic-scale meetings take place, as well as forums that go beyond Russia, the “modernization” with a blue bird flies over the heads of the crowd. Let's try to figure out, the modernization of all spheres of our life has become an objective reality, and what will happen with the course of modernization after the return of Vladimir Putin to the presidential chair.


To begin, consider the situation with the modernization of our Russian society. Without a doubt, it is necessary to recognize that during the presidential term of Dmitry Medvedev, democratic transformations began to gain, whatever, but the move. There were numerous laws related to the reform of the judicial system. The same law on the police, which obstructs the majority of Russians, is also aimed at democratizing public life in our country. Medvedev gave a new impetus to the development of the Global Network in Russia, thanks to which we now have the opportunity to publish highly critical materials without regard to political censorship. However, with all the pros, cons, too short. And it depresses that these disadvantages are more obvious and therefore extremely negatively perceived by the people.

Take at least the endless laws on countering corruption. It becomes ridiculous when President Medvedev in the large hall gathers federal and regional officials, senior prosecutors, police (police) generals and said that they should better deal with the corrupt elements. And while they affirmatively nod their heads, they say, of course, of course. In this situation, Medvedev is even somewhat sorry. Only one thing is not clear: does he really believe that the most important corrupt officials gathered in the soft armchairs will really come out of the hall and say: “Well, that's it! Stop robbing your people! I will not take more bribes! ”And these people are beginning to think about the new law, how to get around the new law, so that you don’t get caught up with the anti-corruption bait. Surprisingly, a whole Anti-Corruption Committee works in our country, which can be called the most useless government body at the current level of Russian corruption. The goals of his creation were, of course, good, but the result, as usual, is pitiable.

Another Achilles heel of modernization undertaken by Dmitry Medvedev is a total disregard for the law by officials of any level. One wonders how these people can pervert any, even the most good, undertaking of the Federal Center. There is no need to go far for examples. Recall the promises of a pay rise to teachers from September 1 by 30%. The teachers happily started the new school year, but the first working month has passed - and in their settlement statements there are old numbers. The local authorities declared to this that there, in Moscow, officials can say whatever they want, and we, they say, have no money for such an increase. And it’s not the salary that rises at all, as it turned out later, but a kind of semi-virtual salary fund that cunning directors can allocate at their discretion. At the same time, their “discretion” often does not coincide with the “discretions” of pedagogical groups.

Modernization of the economy, too, can be considered a hollow sound, as it is not regrettably conscious. For years, we have heard that it’s time for Russia to get off the oil needle, it’s time to take on the mind and diversify the country's economy. But this very hydrocarbon needle is so tightly stuck in the body and it pumps over petrodollars so regularly that neither the leadership itself, nor, all the more, the all-powerful oil lobby, rudely break away from this drip. Any modernization in this industry was, maximum, in laying a new gas pipe.

Modernization of the military sphere also remains only on paper. Of course, there are plenty of plans here too: from outsourcing in military units to introducing the latest military equipment. However, contracts are unsuccessfully stalled, supply agreements are not signed or have been signed, but not in the amounts previously announced. Meanwhile, the army still walks in old-fashioned footcloths and shoots guns from the height of the Cold War.
Modernization of the scientific field was started brightly. The President signed a decree on the establishment of the Skolkovo International Scientific Center near Moscow.

Investments by the state in billions poured there overnight. What today? And today, talk continues of how to attract highly qualified specialists in various fields to work in Russia, scientists with ridiculous wages. The issue of attracting private investors to science is also open. Well, they are not accustomed to investing in Russia in what is capable of bringing real income only after three or four decades (at best).

In general, modernization has rested against the concrete wall of bureaucratic lawlessness and the ineradicable desire of many of our compatriots to “fuck” with it here and now.

We recently learned that the main supporter of the modernization of our country (and here without irony), Dmitry Medvedev, will soon give way to Vladimir Putin. And he, judging by his previous terms at the helm of the nation, is not inclined to global changes. One should not think that Medvedev will be given active work on attempts to reform Russian reality at the proposed Prime Minister position. After all, if he continues to sprout his activities in various areas of the life of Russians, this may somewhat set off the future President. And in our country it is necessary to observe strict subordination, as we recently learned from the lips of both Medvedev and Putin about the resignation of Mr. Kudrin.

As a result, it can be stated that the era of the germs of modernization, apparently, is coming to an end. The fashion for iPads and iPhones will order a long life, since all these devices will definitely be recognized by the evil one. The Russian army will again return its former "pre-modernizing" form: overcoats and felt boots. One party will invent new names for itself within the framework of the prevailing idea of ​​blatant bureaucracy: “People's Front”, “Front Russia” and others. And then - already censorship, which will be recognized as the main symbol of the modernization of the country - moreover, 99,9% votes are, as usual, recognized by the people!

We are in Yandex Zen
About Stalin and Khrushchev
What you didn't want to know about England
18 comments
Information
Dear reader, to leave comments on the publication, you must to register.