November 2 2013
164
During the Vietnam War, American gunsmiths proposed a new type of ammunition: a bomb sprayed a flammable liquid around itself, and then set it on fire. The explosive combustion of the liquid hit the target not only with a shock wave and high temperature, but also with pressure drops in the explosion area due to air burnout. The new Fuel Bomb (fuel bomb, in the USSR the terms "volumetric detonating" or "vacuum ammunition" were used) were immediately put into service and began to search for options for its use. Both in America and in the Soviet Union, active development of such ammunition began: aviation bombs, artillery shells and even infantry flamethrowers. 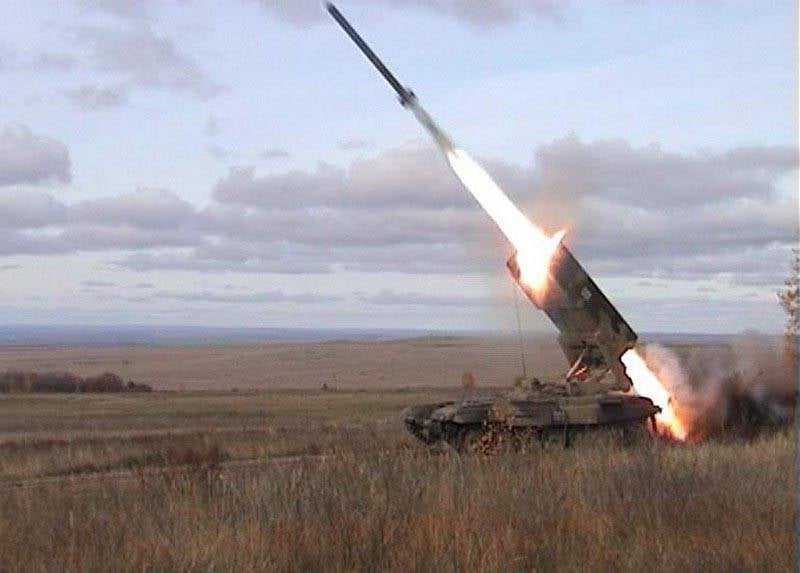 Testing of the latter showed the promise of using space-detonating combat units on multiple rocket launchers. Omsk design bureau of transport engineering was assigned to carry out relevant research and development of the new MLRS, designed specifically for vacuum shells.
Immediately a problem arose: the warhead of the rocket would be too dangerous for the crew, therefore, in order to avoid accidental hits and detonation of ammunition, it was decided to reserve a package of guides. And the armor added extra weight. I had to abandon the idea of ​​a truck-based chassis. Chassis decided to do on the base tank T-72. Instead of a tower, a package of 30 guides for missiles was installed on it on a rotary base, all the necessary equipment was put inside, and the crew was reduced to three people: commander, driver and operator. So the combat vehicle of the complex was made (BM, or “Object 634”).

For the delivery of missiles and facilitating loading, a KrAZ-255B truck-made vehicle was loaded with a crane and guides for loading the BM package. In the stowed position, the block of guides of TZM with rockets is covered by an armored box.
Tests of the new complex, which received the TOC index (a heavy flame-thrower system), began in the 1980 year.

The 220 mm caliber missiles made a splash - there was almost nothing left of the training targets at the range. This effect is more than compensated for the relatively short range of combat, up to 3600 meters. And the armor remaining from the original T-72, solidly increased the survivability of the machine on the battlefield. Nevertheless, the manual on combat use of the TOC-1 recommended to go to the position of firing directly in front of the volley, under the guise of tanks, quickly shoot the entire set of missiles and go to the shelter. This tactic was successfully tested in Afghanistan at the end of the 80. 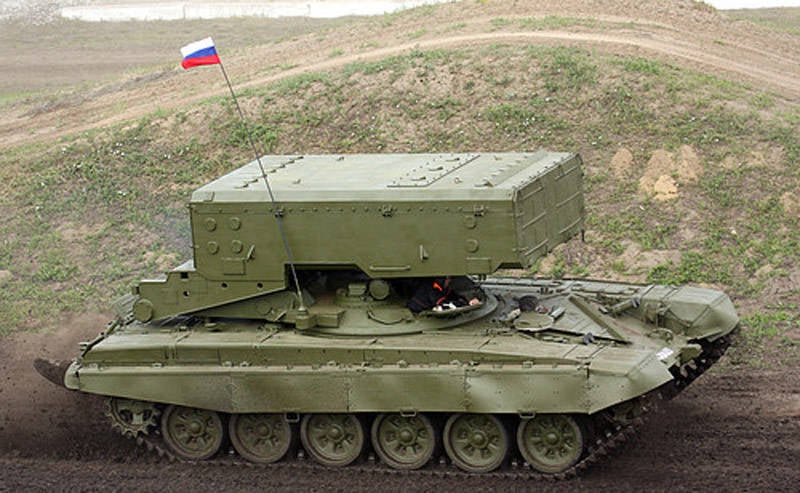 After some modifications, the complex went into service with the USSR-TOC-1 complex, and for some reason some unknown wits called it “Buratino”.

Since the firing range required quick and precise actions, and the type of ammunition required to shoot as accurately as possible, a number of special equipment was installed on the BM. Optical sight for aiming, 1D14 laser rangefinder with measuring accuracy up to 10 meters, tilt sensor of the PB2.329.04 machine and computing complex, according to the readings of the rangefinder and sensors, automatically determining the required elevation angle of the guide block. Manual guidance is also possible, but it requires more time and better crew skills.

As already mentioned, at the end of the 80's a new system was tested in Afghanistan. During the operation "Typhoon" in the winter of 88-89-ies. “Pinocchio”, under the cover of armored vehicles, attacked the positions of the Mujahideen using the tactic “hit-run away”. In the mountainous conditions of Afghanistan, the effect of vacuum ammunition increased due to the reflection of shock waves from the mountains. True, for greater safety, the three extreme "pipes" on each side of the bag were left empty.

The second combat use case of TOC-1 was in March of 2000, in Chechnya, in the battle for the village of Komsomolskoye. Then the general public learned about the system, and unscrupulous members of the press began to spread false rumors and legends about it.

Since the end of the 90-x in the Omsk transport engineering design bureau, work has been carried out to improve the "Buratino". The new version of the complex has been called TOC-1A "Suntsep". Now, the system included a new BM-1 combat vehicle (634 object) with an updated set of equipment and a package of guides to the 24 missiles (3 series of 8 units). Also updated and TZM, unifying it with the BM-1: crane, guides for loading and protective cover installed on the chassis of the T-72 tank. The structure of one calculation includes two such machines, called TMZ-T (563 object). And, perhaps, the main innovation of the “SunTech” is the new missiles, which allow firing to a distance of 6 kilometers, while maintaining the same accuracy and accuracy.

At the moment, "Buratino" and "Solneptek" are in service with Russia (both complexes) and Kazakhstan (TOC-1А only). The total number of heavy flamethrower systems was not officially named, but according to various estimates, it is 10-20 units from Russia and 3-5 from Kazakhstan. 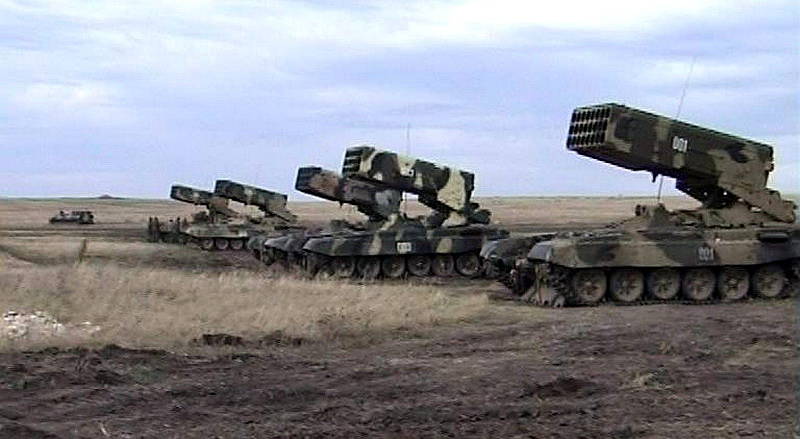 Ctrl Enter
Noticed oshЫbku Highlight text and press. Ctrl + Enter
We are
Heir "Katyusha"More and more armies of the world become owners of large-caliber MLRS
164 comments
Information
Dear reader, to leave comments on the publication, you must to register.