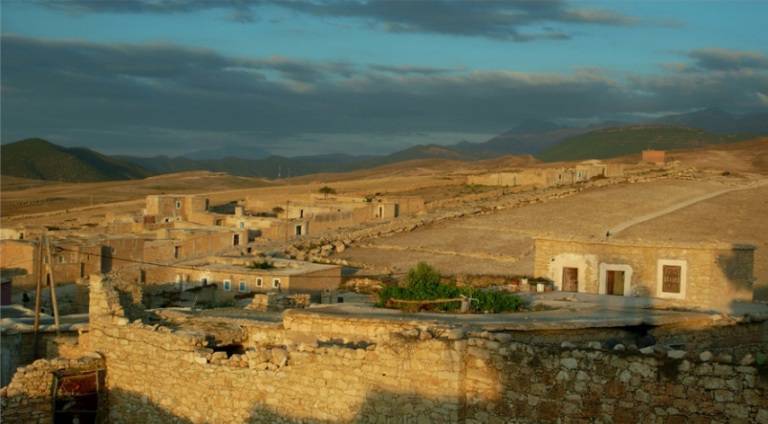 In 1987, in the location of the 173 squad of GRU special forces in Kandahar province, a monument to the dead was erected on a dusty parade ground by the hands of the battalion fighters.

On the two-meter rectangular pedestal mounted tower infantry fighting vehicle. At the base of the monument, a star is carved, along the granite rays of which water flows - a symbol of life in waterless deserts and the mountains of Kandahar ...
I could see the monument only in the photograph, but I was a direct participant in the events after which it was installed. 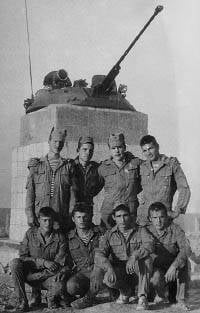 In the autumn of 1986, the number of rocket attacks on the Kandahar garrison increased dramatically. To avoid losses, the command of the 173 squad ordered each unit to open a shelter. The battalion miners, in order to make their work easier, decided to use their professional skills: in solid, cast-iron earth, shallow holes were punched with crowbars, laid trotyl drafts in them and undermined them. Then the crushed rock with a shovel shovel raked on the parapet. It went faster, but this speed of work did not suit the quick decision-making and fast in company affairs. Without further ado, he chose the most powerful charge in the engineering warehouse, capable of piercing up to one and a half meters of reinforced concrete, installed it in the center of a pit dug in human height and blew up. An explosion of tremendous power, magnified many times by the walls of a closed loop, escaping to the surface, knocking out all the glass in nearby buildings.
Combat, alarmed by the explosion at the location of the unit, prepared to listen to the loss report. But when he was convinced that he had done everything without victims, he ordered that the cost of broken glass, which was imported from the Union with such difficulty, simply be calculated from the payroll of Lieutenant Mikhailov. Therefore, returning from the meeting, the enraged Mikhailov demanded Shipunova to himself ...
- Get ready, tomorrow you go to war with Klochko, the commander of the group Gugin. Free
At the same moment, Sanya abruptly turned and ran out the door. Pleased that he got off lightly, he sighed with relief. Fifteen days later, the order of the Minister of Defense was discharged. News I didn’t scare about the combat exit, but on the contrary, I was pleased. A simple Soviet lad, brought up on the examples of the friendship of the heroes of the books of Dumas, who grew up in a working-class area on the outskirts of the city, he had a clear idea of ​​what honor means. A year ago, having lost his best friend in these deadlands, he lived with a thirst for revenge until the last day of his life in this war. Therefore, there was no event more pleasant for him than leisurely collecting his backpack, considering the upcoming ambush.
So this time I took it apart and, having carefully cleaned it, filled up machine-gun shops with cartridges, carefully prepared the mines, put the rations in habitual movements, and then went to the storeroom. Seeing the confused face of Vladimir Klochko, he thought: “He already knows.”
Vova was wildly afraid of war. A native of Western Ukrainian Exactly, in the company Klochko led a quiet and inconspicuous life, trying not to stick out, so as not to irritate the belligerent colleagues with his, as he thought, a privileged position.
But he was scared even in the battalion. Waiting for the order: “Klochko, get ready,” filled his life with horror, made the service unbearable. He early began to count the days to its end.
Every time when he had to give out equipment to his fellow soldiers who went to war, he mentally repeated his prayer, "Not me, not me ...".
But, despite the plea, these terrible words were still uttered ...
Ignoring the capter’s dismay, Alexander clearly explained the task, distributed the responsibilities and went to his communication friends.
Passing through a dusty wasteland, Sanya went to the barracks of the communications company.
- Hello, who is going with Gugina tomorrow?
- Have you seen healthier! I! - Eduard Komkin, a fiery red-haired big guy, a Vyatka kachok, answered affably smiling. They were familiar with Chirchik, together in the same party arrived in the squad last fall. Sanya smiled in response:
- Edik, will there be enough bread in addition to the biscuits for three loaves?
Komkin, a big guy, not a fool to eat, hesitated:
- Maybe four?
- Let's push?
- And Niya for what? - Edik answered with a rhetorical question and immediately, without turning around, looking at Sanya, he rumbled: - Nei-ia!
At the call of Komkin, a young signalman approached them with a strange moon gait. Seregu Pakhno, who served in the communication group for the first months, was nicknamed “Niya - an artificial person” for his striking appearance of the heroine of the fantastic film “Through thorns to the stars”, which hadn’t left 1982 for a year. A native of Krasnodar, not a coward, at the exits he has established himself as a good signalman-weakman. Sergey, being well-educated, had a great sense of humor, so he did not take offense at the nickname, and sometimes even played along with the jokers: catching curious glances on himself, he unexpectedly, to the general delight, began to make a knee of a break in civilian style.

In war as in war

Even the wind on the slopes subsided

Waiting for the dawn, the special forces proceeded to the inspection of the dead. Those strikingly different from the local peasants captured at night. The clothes they wore were new, from expensive high-quality fabrics, and shoes to match her: leather sandals with high heels were adorned with metal rivets. From the bodies that had already cooled down, a sweetish-luscious smell of death emanated, the fragrance of rose oil, which had not yet been completely interrupted, the smell of "dushman". Time will not erase this smell in the memory of those who have experienced this sickening blend of oriental smells and rose water. It can not be confused with any other flavors.
These were people who well understood that the labor of killing is paid much higher than the daily exhausting peasant flesh. Mercenaries who kill for money. And their God was a Kalashnikov assault rifle. 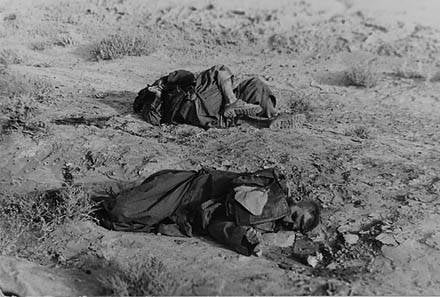 Seeing where and in what positions the bodies lay, it was possible to understand why they did not offer decent resistance. During the night battle, being in the dead zone under the mound, the "spirits" could take advantage. The scouts lifted each time, firing, from the ground, clearly projecting to the waist against the sky. But an explosion of seven kilograms of TNT at close range, stuffed with chopped steel wire, shocked them. Collecting trophy trunks, counted fourteen corpses. They found a trail of blood, which led to a dried up bed, leaving the road at right angles. Covering it from two sides, like wolves, special forces, sneaking, followed the trail. Soon they saw a man lying on the ground. The machine-gunner took a position in the roots of a stunted tree, prepared to cover his comrades. Not reaching ten paces, the sniper knelt down and carefully aimed at the head lying.
Two scouts crawled close to him. The Mujahid was asleep, wrapped in a cape with his head out of which only his legs were sticking out. One of the calves is blackened and swollen, pierced by a bullet. It became clear why he did not leave. Near the head of the sleeping lay a grenade, the machine gun was on the side. “Here is a bitch!” - the scout thought, having stolen a grenade, and without fear, rose to his feet. Awakened by a kick, the “spirit” yanked the blanket off with a jerk, frantically began to fumble around with his hand. The black-eyed eyes widened in fear. The laughter of “shuravi” caused a wild horror in him, and he screamed. He was a boy; he looked like he was about fourteen. He was not shot on the spot.
- What do we, animals, kill children? - Edik spoke with a wicked grin, cracking the prisoner's hands to the point of crunch. 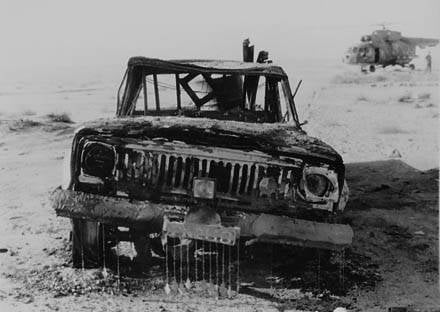 Road to the squad

All the way back to the battalion, not sparing, will be beaten, taking out his anger on his comrades who died in these wild lands. The intervention of the officers will save him from the final punishment.
Inspired by the success of the scouts, they did not complain that the return to the battalion was being delayed. Something went wrong for the evacuation of the armored group that came in the morning. Here is one armored personnel carrier taken in tow. Stalls every second kilometer. So fidgeting, constantly stopping in order to eliminate the damage, for dinner the armor crawled out onto the plain. Before concrete, leading to Kandahar, remained about a dozen kilometers. The officers, after consulting, contacted the battalion command and control center and requested assistance. The detachment command immediately sent backup armor to them. Five infantry fighting vehicles, grinding the stony ground of Argastan with their tracks, rushed to their comrades. Well, here they are. Tentative roaring, throwing up a black exhaust column from the soot, a fighting machine flew out from behind the hill. A scarlet flag developed on its antenna.
- Hooray!!! - scouts happily shouted, tired of waiting.
To the right and to the left began to let signal flares, saluting friends. Somewhere behind the hill an explosion slammed. There was an alarming silence. The quiet crash of a radio air shook the radio operator’s hysterical cry:
- We are undermining ...
A terrible force explosion of a landmine split the body of the car in half, in the dust blown rollers. The tower with the marching assault force sitting on it was thrown to an enormous height. The dead are already in the air, they fell with her for a hundred meters from the burning frame of the car.
In the afternoon, contacting the detachment, the officer who commanded the stuck armor, assessing the characteristics of the route he traveled, fearing the laying of a mine, warned "to go his way." An instinct is a delicate matter. He was sure that his opinion was heeded. And now was furious.
Armor led the new commander of the first company. Stubborn, arrogant, the captain was substituted. And he was severely punished. Only the price for his obstinacy was the lives of young boys.
When it got dark, the helicopter arrived. Beam landing light for a long time fumbling on the ground, picking up a landing site. Taking the bodies of the dead, whistling blades, tore the wheels from the ground. Leaning to the side, fell into the darkness ... For the last time, he carried the guys into the squad.

When the detachment went to the Union, the tower was removed from the pedestal and taken with them. It was not possible to take it from Azerbaijan. But since then, wherever the squad was located, a monument was erected everywhere, on which the names of the fallen soldiers were carved. This is a tribute to memory. Tradition. 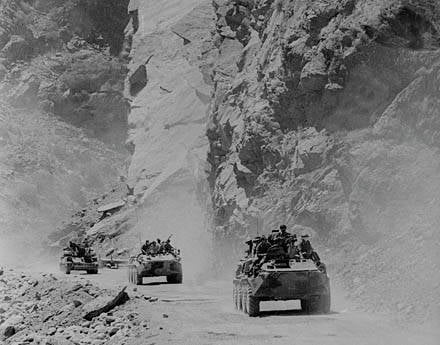 Six months later, the helicopter in which Gugin's group was stationed, as a result of a collision with another helicopter, caught fire in the air and began to fall. They had to accidentally leave the board, dropping with parachutes from a burning car. Gugin badly burned, but left the board last. At the same time, “Niya is an artificial person” - Sergey Pakhno burned down in the second helicopter.
Klochko was awarded the medal “For Courage” for this fight, and twenty years later he became a member of the Rovno Parliament.
And Sanya still does not like the smell of rose oil.

Ctrl Enter
Noticed oshЫbku Highlight text and press. Ctrl + Enter
We are
Guards minersTurntables, Afghanistan. "Eight"
8 comments
Information
Dear reader, to leave comments on the publication, you must to register.