Tricky comments. And where is the "Peremoga"? 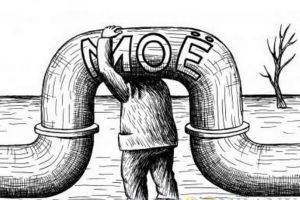 Well, overwhelmed, frankly, many media in Ukraine. Another big peremoga. No, not even GREAT PULSE. Were forced another discount on gas from Russia.

It seems to me that here the words “peremoga” and “extortion” have one root. But the point is not that. The essence of the filing process.

If you read the same BBC, then almost the whole European Commission threatened Russia and offered to give this very discount. What many Ukrainian media happily exaggerated. Here, they say, Europe has helped us, Europe is all for us, Ukraine is more than Europe and so on.

But the commission didn’t even get together for discussion. Well, this is also nothing, sort of like the Russians were frightened by the very fact and made concessions. Regular concessions.

The most important thing is to properly arrange and file. And it does not matter that the words “file” and “sop” have similar roots. The result is more important: there is a discount as a handout, which means there is peremoga.

And how it all famously began ... Loud statements on the topic “we don’t need Russian gas from 1 in April, Europe will give us everything”. And then bang - and the cold snap fell on their heads. And the gas was needed.

And those who made loud statements at the end of March (I won’t point the finger at anyone, they are all known), immediately crawled over to the aggressors. No, of course, crawled with pride and independence, but the request to Miller and Novak was stated. Give us more gas and give us a discount again.

And Miller with Novak what? They are like servicemen and completely dependent. Sent by instance. Up Kind, by the way people. Could and on a known Russian route to adjust. But ... "based on a difficult situation and being happy for the common people" ... In short, the result is known. You can breathe for another three months. Peremoga, in one word.

However, on the eve of these happy and reluctant events, an absolutely unnoticeable meeting was held in the energy sector of Ukraine. And there, Mr. Yatsenyuk was not talking about victories.

“The Ministry of Energy and Coal Industry asks for the sixth time to extend the state of emergency in the energy sector ... I am extremely dissatisfied with what is happening in this area. I see that the extension of the state of emergency reflects the real situation in the energy sector. Already 2,5 billion defaults, a mess in the calculations with the power industry. Coal, as always, no. Another point - the repayment of wage arrears to the miners. 200 million hryvnia allocated by the government, 250 million hryvnia - gave the market. These 250 millions have gone somewhere - to a certain bank that has already gone bankrupt, ”said Yatsenyuk.

Well, the situation is really extreme. So stealing from under the nose of the ministry ... Unless the ministry itself steals. 55% it is not known where to send - it is even possible for Russians to give a master class.

Nevertheless, the government will continue the state of emergency in the energy sector of Ukraine for another month. And then either a complete peremoga will come, or a full fur animal.

But Demchishin has nowhere to go - either to finish the state of emergency in a month, or ... I don’t know, there’s something like a theme about a pistol with one cartridge that would have sounded nothing, but not at this time and not in this country. But the instructions given, and given the prime minister, will have to perform.

Although one of the tasks is not just surprising. The idea is to carry out, through the Verkhovna Rada, granting the government the authority to impose rules on the electricity market in "temporarily occupied territories, including in the zone of the antiterrorist operation."

Waltz on the Titanic. Especially in the ATO area. So I see the envoys of Ukrenergo on the territory of the LPR (fed from the Rostov region, if someone does not know), who implement these rules. Okay, apparently, Demchyshyn Yatsenyuk tired, but what about the energy?

And so, wherever you spit, peremoga is solid.