Kiev, in response to the gas ultimatum of Moscow, responded with military exercises 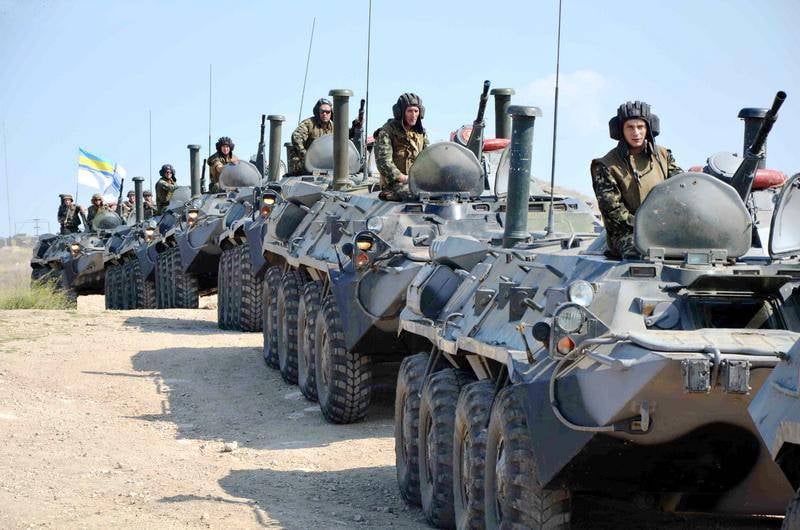 Today, on the eve of the beginning of the heating season, Ukraine and Russia once again found themselves on the threshold of a war - the “gas” one. No matter how strange it may sound, such confrontations have already become traditional with the approach of cold, but if previously all issues were resolved in the framework of diplomatic negotiations (though today, for some such negotiations, former Prime Minister of Ukraine Yulia Tymoshenko may be behind bars), then the current confrontation in Kiev decided to respond with a demonstration of military power. It happened immediately after the completion in Crimea of ​​one of the stages of the research command and staff field exercises of the Armed Forces of Ukraine with the ambiguous name “Adequate Response - 2011”.

Yevgeny Lupakov, captain of the 1st rank of the reserve and an active participant in the "Union of Officers of Ukraine", which became known in the early 90s for its ambiguous almost criminal actions in the division of the ships of the Black Sea fleet between Russia and Ukraine, in particular, said: “All exercises today are taking place in accordance with the combat training plan developed for the year. I cannot but admit that it is very good that these large-scale exercises take place simultaneously with events that demonstrate the aggression of Russia and not only in the gas issue, but also in many others. And these teachings will once again demonstrate to our fearless brothers, but in fact the invaders, that you should not flirt with us. After all, this was already in the question of Tuzla. Our guys prove that it is not worth playing with Ukraine. The Ukrainian military has something and what to defend. ”

First of all, who is Yevgeny Lupakov? In the 1992 year, being the deputy commander of the 14-th separate division of submarines of the Black Sea Fleet, Lupakov was one of the first officers to take the Ukrainian oath. From that moment on, he began to actively stir up his fellow soldiers. The case later almost ended in tragedy. Here is what Igor Leukhin, captain of the 1 rank, told the case at the time, while senior assistant commander of the diesel submarine B-871: “March 13 March 1992 by B-871 castle on ideological work with personnel V. Petrenko assembled sailors of Ukrainian nationality passing urgent service, and under no justified pretext took them to the submarine, moored at the floating pier in the South Bay. Upon arriving at the pier, Lt. Petrenko gave orders to Team Down and fired three red rockets from the rocket launcher. On this signal, Evgeny Lupakov arrived from the far shore of the bay. At the central post, using general ship liaison, he read the text of the state oath of allegiance to Ukraine. The signatures on a sheet prepared in advance were placed by Petrenko, as well as four officers and a sailor Makhno.

Properly assessing the situation, the bilge driver sailor A. Zaets and engineman sailor M. Abdullin, who were on duty, were sealed in the 4 compartment and threatened to stop the ventilation of the battery, which threatened to explode the gas mixture, asked to provide them with the commander or with the first mate.

About what happened, we with the commander learned directly from the sailors who were returning after dinner to the barracks. The commander sent me to the boat, he himself went to the team in order to clarify the situation and inform the connection commander. At the central post, I found Lupakov. At this moment, the navigator of the boat Art. Lieutenant Barinov read aloud the text of the Ukrainian oath. Seeing this, I immediately withdrew the logbook, reported on the illegality of their actions, and demanded that they immediately leave the warship. ”

In general, then the B-871 was able to defend, and today it is in the line-up of the Russian Black Sea Fleet called “Alrosa”. And Yevgeny Lupakov quickly fastened a trident to his cap and turned into an ardent Ukrainian patriot, in every step he discovered the machinations arranged by the Russian side.

But this история. Much more interesting is the current Ukrainian teachings themselves under the loud name "Adequate Response - 2011". The exercises are held simultaneously with the participation of the ground forces, naval forces and the air forces of Ukraine at 15 ranges with missile launches and live firing. In total, 9500 military personnel take part in training battles, more than 2300 units of military equipment and weapons, in particular, 33 of the ship, 40 aircraft, 31 helicopter, boats and support vessels. The Ukrainian military didn’t carry out anything larger for many years. The reason, however, is commonplace: lack of money. Now, obviously, there were.

But this is far from the case. As you know, the defense budget of Ukraine, for example, for 2010 was planned at the level of 13 billion hryvnia - in fact, the troops received only 9 billion. According to Ukrainian Defense Minister Mikhail Yezhel, for the primitive survival of the army in 2011, at least 19,8 billion is required. hryvnia But the budget allocated to all 13,6 billion

The results are as follows. According to the Center for Military-Political Studies, the combat effectiveness of the forces and means of the Ukrainian Navy today is only 7%. The only "naval" program of Ukraine to create its own corvette is frozen. The average hourly flying time of pilots in the Air Force is 30-40 times less than the criteria for NATO preparation require.

It is clear that there is no money in the Ukrainian army not only for training, but also for elementary maintenance of combat capability. It becomes unclear - what was the holding of such large-scale exercises against the background of complete impoverishment?

We are in Yandex Zen
"Polite people" in the Crimea through the eyes of Americans
The active phase of the "Sea Breeze-2013" exercise has been completed.
102 comments
Information
Dear reader, to leave comments on the publication, you must to register.