In the US, found the enemy of the people

April 3 2015
34
The other day, the results of the Reuters and Ipsos poll, which ran from 16 to 24 in March, were published. 25% of Republican respondents named Vladimir Putin as a serious threat to the United States. Another 23% decided that the US threatened Bashar Assad. The majority (34%) called the main threat ... Barack Obama. 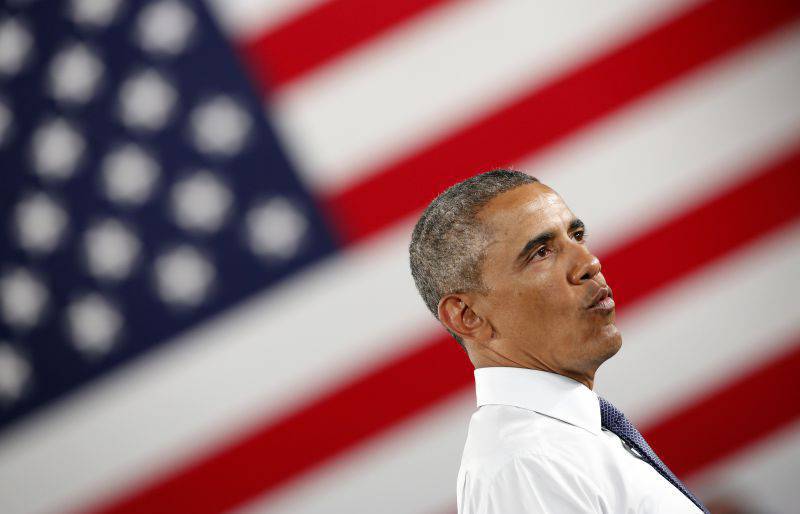 Every third Republican believes that US President Barack Obama is a direct threat to the United States. Obama even outstripped Russian President Vladimir Putin and Syrian President Bashar al-Assad, writes Robert Rampton on the website Reuters.

A joint online survey of “Reuters” and “Ipsos” took place from 16 to 24 in March. 1083 Democrat and 1059 Republicans (US citizens) participated in the survey. Americans had to answer the question of who currently poses a threat to the United States. A list of organizations and individuals was offered. Respondents had to assess the degree of threat on a five-point scale: a unit meant “no threat”, and a five - “imminent threat”.

The poll showed that 34 percent of Republicans consider Obama an “imminent threat.” Obama managed to get around on this indicator Putin (25 percent), who in the US is accused of aggression in Ukraine, and B. Assad (23 percent), about which Western governments claim that he used poisonous gases and special bombs against his citizens.

So, despite the wave of propaganda and the statements of politicians about the “Russian threat”, the Americans consider not Putin to be the main enemy, but their own president. It is worth recalling that Obama is the Nobel Peace Prize winner. Of course, we live in a time when Orwell’s dystopia was almost realized, and the war is really called peace. And yet - why are Americans so afraid of their own president?

About why people in the United States do not trust Obama, "Free Press" told political analyst, an expert on US foreign policy, Viktor Olevich.

“We must take into account the domestic political atmosphere in the United States, which was formed during the sixth year of the current president’s rule,” the expert noted. “The fact is that during this period (not without the participation of the Republican Party), a certain stratum of people has formed in the country who have a serious distrust of Obama’s policy - both domestic and foreign. They are not quite satisfied with its origin - he is, so to say, not quite an American for them or an unreal American. Therefore, his actions as president do not always meet the interests of the American state. These are people who believe that Obama is a socialist or even a communist. ”

The expert recalled that for us it may sound absurd, but in the United States this is a common theory. For example, among the Americans of the "right" views in the course of the version that B.H. Obama is close to the extremely "left". They also say that his father was a Muslim, and therefore Barak Hussein likes Islam. Moreover, these people believe, both in the Middle East and within the country, Obama purposely pursues a policy that threatens the interests of the United States. It turns out that the 34% of Republicans identified by polling believe that Obama does not love his country and secretly pursues a policy that harms the US national interests.

The expert also noted that the right-wing American media regularly wrote that Obama could not be trusted because he was deceiving the American people. There are theories according to which this person came to American politics from the outside.

According to another expert, Deputy Director of the United States and Canada Institute Viktor Kremenyuk, there is nothing surprising in the results of the survey published by Reuters. “Americans actually believe that Obama is a failed president,” Kremenyuk said “SP”. - We waited for him to make everyone happy and ash. The real results were quite modest. ”

However, Obama himself is not so guilty. The expert believes that his "squeezed Congress." Republicans did not allow him to spend almost no one bill, which allowed to carry out the planned transformation. And thus created Obama image loser. But Obama still pulled the country's economy. But still considered a loser. And if so, it is bad.

So, let me add, Obama is bad and almost an enemy of the American people. And if you listen to fellow conspiracy theorists, then Barak Hussein is a protege of dark forces and, probably, did not come from Africa, but from another planet. "Outside", in short. And now it conducts in the USA a hostile policy aimed at the collapse of the state. It is possible that Obama was not sent by aliens, but by the people of the Kremlin. Conspiracy theorists have repeatedly called Obama an agent for Putin.

By the way, in the United States they write about the popularity of Putin. And they sadly point out that Obama will not rise to the level of Putin.

On the "Yahoo!" published an article by Rick Newman, which ends with the words: "Long live Putin."

Imagine, the author writes, inflation in Russia reached 17%, the banks almost collapsed, the economy was in recession ... The President of this country would have to explain something to his people. But after all, everything described is the actual state of the Russian economy, which has not yet recovered from the fall in oil prices and Western sanctions. In 2015, the economy could shrink by 10%, unemployment would increase, and imported goods would be in short supply. However, Putin’s popularity rating is above 80%! And it is almost twice the approval rating of President Obama and higher than that of any president of the United States of the last century (with the exception of wartime). Not a single Western leader today can measure popular with Putin.

"How did Putin achieve this?" Maybe he is politically invincible? Or are Russian voters constantly drunk? ”

No, this is not true, the author continues. Putin is "not invincible," and the Russians are not drunk. However, Western political norms cannot be applied to Russia. It's all the other way around: unlike the American experience, in Russia the deterioration of the economy strengthens the ruler - and this “no one understands better than Putin himself.”

The government has successfully exposed economic hardships as a fee for patriotism in Russia, explains Alex Kliment, director of Russian research at the Eurasia Group. Putin exploits "rich traditions" associated with Russian fears "about the encirclement and betrayal of the Western powers."

The author believes that sociological polls conducted in Russia, even by such authoritative groups as the “Levada Center”, can inflate Putin’s popularity. And yet, they do not build an analysis on "fabrications." High approval rating - it exists. And he can accurately reflect Putin’s position among people who watch TV and heed propaganda.

“Long live Putin,” the American states with some sadness, apparently, without really understanding why Putin’s trust is so high.

The Americans, in conclusion, are surprised at the approval rating of Vladimir Putin, but for some reason they are not amazed at the fact that their president is considered the enemy of the people as the “imminent threat” of the United States. This is a paradox! And to our topic, in our opinion, Western political scientists could devote their dissertations.

In fact, everything is simple. In 1990, the Americans liked our Boris Yeltsin - with him the White House could carry out any policy in Russia and its former Soviet "outskirts". At the same time, the Americans liked their presidents. Bill Clinton, by the way, is still a very popular figure in the States (polls are regularly held there concerning the performance evaluation of former presidents).

Today, the Americans do not like Putin and at the same time their own president, B. Kh. Obama, is not likable either.

The conclusion is simple: it is because Putin does not conduct Obama’s policy in Russia. The United States stumbled upon opposition, a political crisis, and feel it pretty strongly.

The second conclusion: the one who replaces Obama on the American throne will not be spoiled by popular love in the United States either. After all, Putin will still be president in Russia, and he will still not pursue the course of the White House.

Apparently, journalists from the United States understand this, and therefore they write with sadness: "Long live Putin."