April 1 2015
39
The appearance of the Russian armed forces is gradually changing, the implementation of the state program of rearmament of the army continues in Russia, which is calculated until the 2020 year. New weapon and military equipment is supplied not only to army units, but also to units of the Interior Troops of the Ministry of Internal Affairs of Russia. Thus, the internal troops receive new armored personnel carriers BTR-82А and BTR-82АМ, various modifications of armored vehicles "Tigr", armored "Ural-BB" and various special purpose vehicles.


The Military Industrialization Corporation, which in the 2011-2014 years supplied the Russian Interior Ministry troops with more than 60 BTR-80 armored personnel carriers, in December 2014 won the auction for the delivery of another batch of armored personnel carriers of another modification - BTR-82. The corresponding contract was signed by the parties 26 December last year. The total cost of supply of 9 BTR-82А is 251,5 million rubles or 27,9 million rubles per car. It should be noted that the cost of an ordinary BTR-80 in 2014 prices of the year was for the 12,3 MVD a million rubles. According to the terms of the contract, all vehicles must be delivered to the internal troops before October 1 2015. Seven armored personnel carriers will travel to the 3658 military unit, which is part of the 50-th separate operational brigade and is stationed in the Persianovsky village in the Rostov region, the remaining two armored personnel carriers will receive the Ministry of Internal Affairs of Russia in the Sverdlovsk and Tver regions.

In addition to the newly built BTR-82, the internal troops in 2015 will receive another 15 BTR-82AM, which will be upgraded from the previously released BTR-80. In the near future, a contract is expected to be concluded with the 81 Armored Repair Plant from Armavir, which has similar experience and has previously signed agreements with the Russian Ministry of Defense. The cost of the contract for the modernization of 15 BTR-80 will be 351 million rubles or 23,4 million rubles per unit. This is higher than the price of a three-year contract with the Russian Ministry of Defense, according to which the modernization of one BTR-80 in the BTR-82AM amounts to 21,6 million rubles. 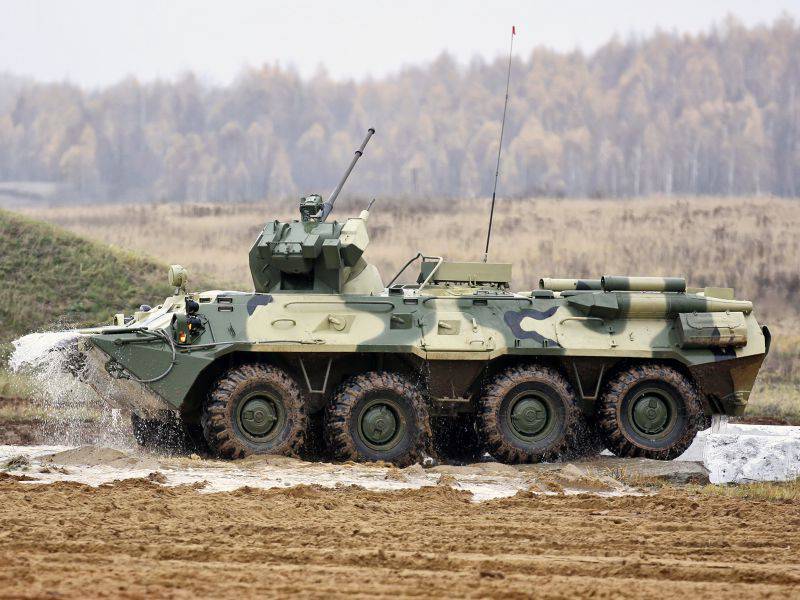 The overall layout and level of ballistic protection of the BTR-82А remained the same as that of its predecessor, the BTR-80А, but the survivability of the crew was increased by installing anti-splinter tamping, anti-mine protection seats and the installation of an advanced fire detection and extinguishing system. The crew of the armored personnel carrier, among other things, is protected from the effects of nuclear, biological and chemical weapons, thanks to the onboard filtration system and a complete air conditioning system. The version of the BTR-82AM is an upgrade to the previously released BTR-80 to the level of the BTR-82А.

Also over the past decade, the Ministry of Internal Affairs has been an active buyer of various modifications of the Tiger armored car. Among them are special police cars SPM-1 (GAZ-233034) with 3-m armor class and SPM-2 (GAZ-233036) with 5-m armor class. Apparently, the last 11 SPM-1 and 17 SPM-2 were supplied to the Ministry of Internal Affairs in 2010, after which supplies of armored vehicles with Cummins engines were temporarily suspended due to the need for import substitution. Starting from the 2013 year, the MVD of Russia conducts the purchase of SBM VPK-233136 armored cars, which received domestic-made turbodiesels YMZ-53472-10, developing power in the 215 HP. These cars are armored to 5-th class of protection. The total mass of the armored car built on the Tigra-M base is 8200 kg, of which 1200 kg is the mass of the transported cargo. In 2014, the first batch of 10 vehicles worth 9,5 million rubles each was delivered to internal troops. In the 2015 year, it is planned to purchase more 11 similar armored vehicles. 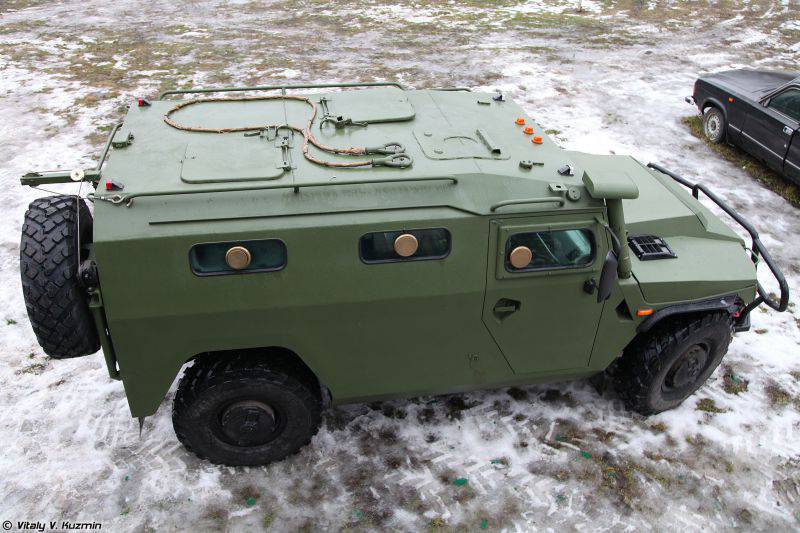 The Tigr-M military industrial complex 233136 is a special armored vehicle (GMS), which is designed to arm the Russian Interior Ministry troops. Crew - 1 driver and 8 passengers. The ballistic protection class according to the Russian Standards is 5. The developer of this version is NPO "Special equipment and communication" of the Ministry of Internal Affairs of Russia. On the roof of the armored car there are two hatches, in the windows of the doors and sides of the car there are loopholes for firing from personal weapons. The machine is equipped with an air conditioning system, auxiliary heater АПЖ-20Д-24Т with the possibility of heating the habitable compartment, as well as a brake system with ABS. In addition, the armored car has a fire extinguishing system under the engine compartment "Doping-2" and electric winch ELA-4000-24 "Tow truck".

Beginning with 2008, Russia has been working on the creation of a special combat reconnaissance vehicle (SBRM) based on the SPM-2 for the needs of internal troops. In 2010, an order for the implementation of the corresponding OCD “Connector-Saponification” was placed in Tula at NPO Strela. However, two years later, this agreement was terminated due to the inability to start the serial production of the SRMR at the enterprise. Later, a similar agreement was concluded with the Omsk Institute of Instrument Engineering for the amount of 111 million rubles. In the course of the R & D by the end of 2015, it is planned to complete state tests of a prototype machine. 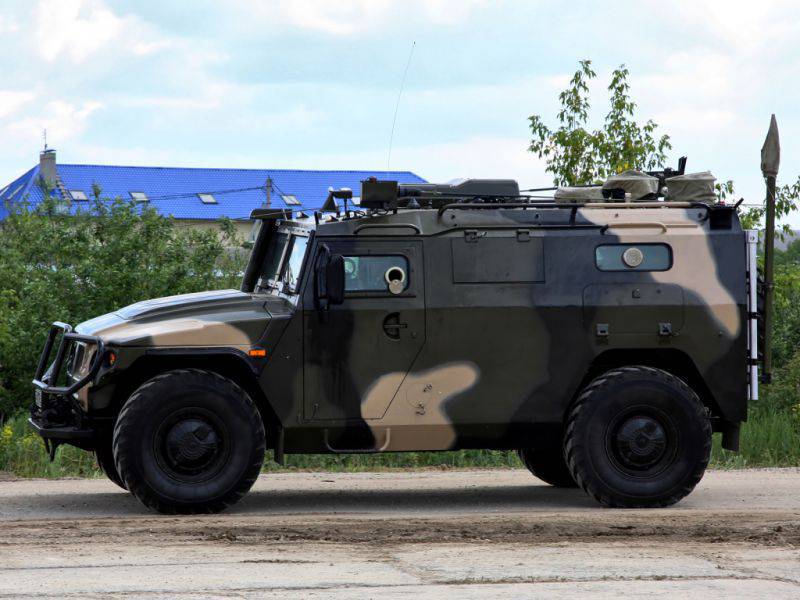 Radar "Fara-PV" can be used at any time of the day or night, including in the absence of optical visibility (dust, smoke, fog, snow). Its main purpose is to detect moving ground targets (cars, people). The station can detect a moving target such as a car from a distance of 6 km, and a person from a distance of 3 km. The modified Sova-M shot detection system is designed for installation on moving vehicles and armored vehicles. The complex allows in less than 2 seconds to detect targets at a distance of up to 600 meters for small arms of caliber 5,45-7,62 mm and up to 1500 meters for small arms of caliber 12,7-14,5 mm. At the same time, the exploration sector is 360 degrees. For comparison, according to the standards for detecting 6-8 targets (from 10), 200 minutes are allocated at daytime from 2500 to 30 meters, and at night 40 minutes for 3-4 targets. In this case, the detection of a firing position by eye using optical devices is usually possible only after 3-10 shots.

Will receive internal troops and new command and staff vehicles (KSHM). Since the P-142NSA command and control vehicle created on the KAMAZ chassis was designed to provide communications in the district-division-regiment link, in the middle of the 2000-s in Russia it was decided to develop a standardized KSHM equipment an armored base for units of the intelligence battalions of the Russian Interior Ministry troops and special forces units. This machine was the P-145BMA, made on the chassis SPM-2 GAZ-233036. The tests of the car were completed in 2007 year. In 2014, it was planned to purchase two such machines with delivery times in 2015. The cost of each command and staff machine is 18 million rubles. It is reported that KSHM is equipped with modern radio stations of the HF and VHF bands: Р-168-25У-2, Р-168-100У-2 and Р-168-100КB of the complex "Aqueduct". In addition, the KSHM will be equipped with an Erik operative radio station of a police and military range, a T-231-2 security communications equipment and an ICOM aviation-range radio station.

The reconnaissance chemical vehicles UAZ-469p, built on the chassis of the UAZ-315195, which are located in the RCBZ units of the Ministry of Internal Affairs of Russia and are subject to change. They are planned to be replaced with a specially developed car "РХМ-ВВ" based on the SBM-233136 "Tiger". Above the creation of this machine worked in Moscow Center for Special Design "Vector". The works were carried out within the framework of the ROC “Razruha-1” and ended in 2014, when an experienced copy of the new car was presented at the Interpolitex-2014 exhibition. From 2015, one can expect deliveries of special vehicles to the internal troops. The estimated cost of one PXM-BB car is 36 million rubles. The car is intended for carrying out radiation and chemical reconnaissance, as well as sampling for further research, warning of the danger of radioactive and chemical contamination, informing by radio communication of the results of the exploration of the area, visual indication of contaminated sites. 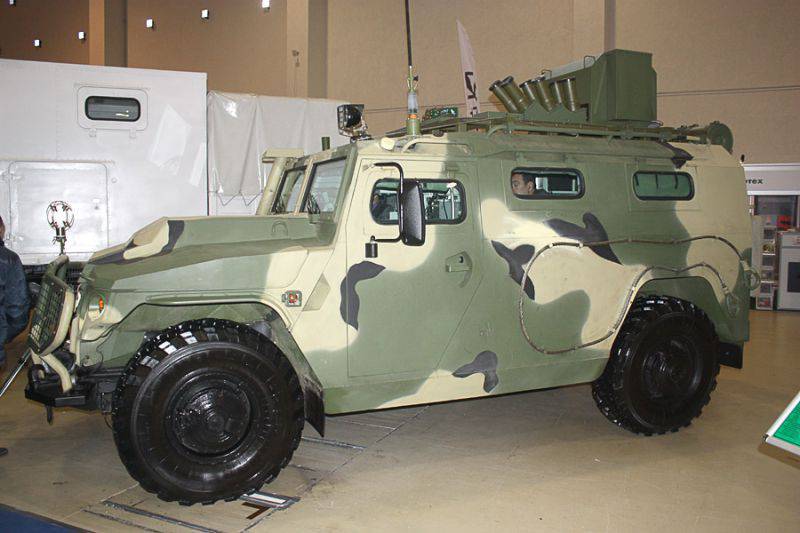