On the new political situation 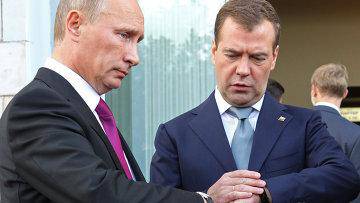 A new political situation is emerging in Russia. It seems to me that the main thing in this situation is not that Vladimir Putin announced the start of his election campaign. This is a long-forecasted event. The main thing in another - in the new alignment of political forces. The failure of the project of the updated “Right Party” with the oligarch Mikhail Prokhorov at the head led to the fact that the Communist Party remained on the left flank almost in splendid isolation political structure to actually influence the electoral process), and on the right - United Russia. Earlier in the Kremlin, apparently, it was thought that the Communist Party of the Russian Federation would ideologically compete with the liberals of Prokhorov, but it turned out that it would have to compete with one political rival, United Russia.


Moreover, the priorities in ideology in many areas will be on the side of the Communist Party. After all, the entire period after the financial crisis of 2008, "United Russia" more and more shifted to the left, remaining the party of the center. Now, any shift to the left is a loss of face before the onslaught of the Communists. Not the United Russia party remains in the political center, but Putin alone (whose election as president is unlikely to raise doubts). Moreover, in recent years, a significant shift to the left, that is, towards the Communists, has already occurred in the consciousness of the population (or, as they say, the "electorate"). This is evidenced by surveys of all Russian sociological centers, as well as the results of voting on all resonant political programs on TV. The most amazing thing is that the Kremlin itself contributed to this field of consciousness of the masses by organizing numerous historical TV show featuring Sergei Kurginyan.

Kurginyan, in fact, recoded the matrix of public consciousness, which has dominated the last twenty years. If Putin will only occupy the side of United Russia and move to the right, then a situation may arise that is close to 1993, Boris Yeltsin, with the “reformers” against the communists and national patriots. The fact that the national - the patriots at the level of the electorate will traditionally go along with the communists, and not with the KRO Dmitry Rogozin (who entered Putin's “Popular Front”), is hardly in doubt. But "zero years" - not the nineties. The Arab Revolutions gave an example of any opposition. It is unlikely that Putin will want to conduct similar experiments in modern Russia. The Kremlin is really afraid of the Russian version of the “Arab” twitter-color revolutions. Only this can explain the cancellation of the previously approved plan to promote Prokhorov to power. What scared the Kremlin was at the last stage of this project? I think the “orangism” of the situation around Prokhorov. He was in the hands of: his "honestly acquired" billions of dollars, which can be used at his own discretion and not accountable to anyone; charismatic Yevgeny Roizman, capable of leading both a democratic and a criminal "street"; the project of the All-Russian "Drug-Free City", which would structure this "street" on a national scale; American Basketball Club, which allows its owner (Prokhorov) to quickly enter into direct informal contacts in the business and political elite of the United States; Ukrainian political technologists are "Orange", who have specific experience in the period of color revolutions. At the last stage in the Kremlin (or in the Lubyanka), they realized that they themselves were introducing "for the teeth" a "Trojan horse" capable of becoming Putin's real competitor in the presidential election.

In the new political situation, when the “Orange” can become the left, the most optimal option for Putin is to have to rise above the clash already during the Duma elections, to create an image of a political leader uniting rather than separating the nation. Putin’s repetition of the mistake of Yeltsin, who did not become such a common leader, could lead to a new tragedy, like the “black October” of 1993. If Putin does not occupy any one side, then he will not need the ultra-high figures of the victory of United Russia in the elections to the State Duma. He just need to be honest elections. He will need such figures as the former head of the State Drug Control Agency Viktor Cherkesov, among the leaders of the Communist Party of the Russian Federation (already included at the congress of the Communists in the top ten of the federal list). It will be beneficial for him to give a number of posts of key committees to the left, that is, to the communists. Maintaining this right-left balance is important for Putin and in fact during the presidential election. The main rival for him, as in his time and for Yeltsin, will be Gennady Zyuganov. Elective stamps Yeltsin with pictures of the GULAG - in 2012, the year will not work. Suffice it to recall that the Kremlin’s attempt to conduct a new de-Stalinization in the country according to the methodology of Mikhail Fedotov and Sergey Karaganov was completely rejected in Russian society. Moreover, in all its layers. This is evidenced by all sociological measurements conducted by renowned research centers. Putin will have to use rhetoric, as well as conceptual solutions of both the right and the left. The "leader of the nation" must be recognized by all. After the presidential election, a favorable balance for Putin is the right-wing government headed by Dmitry Medvedev and the left-wing Duma. This balance is especially necessary for Putin in international relations, given the "love" for him of a number of European and American politicians.

We are entering the REAL POLICY band. It can turn around both tragically and constructively optimistic. But the stagnation, which many political scientists are talking about, is clearly not foreseen.

We are in Yandex Zen
Interview of V. Putin to Channel One and the Associated Press Agency
What you didn't want to know about England
26 comments
Information
Dear reader, to leave comments on the publication, you must to register.