April 1 2015
63
Not so long ago, the famous gunsmith designer Vladislav Lobaev returned to Russia. After several years of work in the United Arab Emirates, Russian engineers headed by V. Lobayev decided to return to Russia. Now the development and production of a new high precision small weapons conducted by Lobaev Arms and Design Bureau of Integrated Systems (ICIS). Based on previous developments, these organizations have created several new models of sniper rifles and are now trying to promote them in the market. 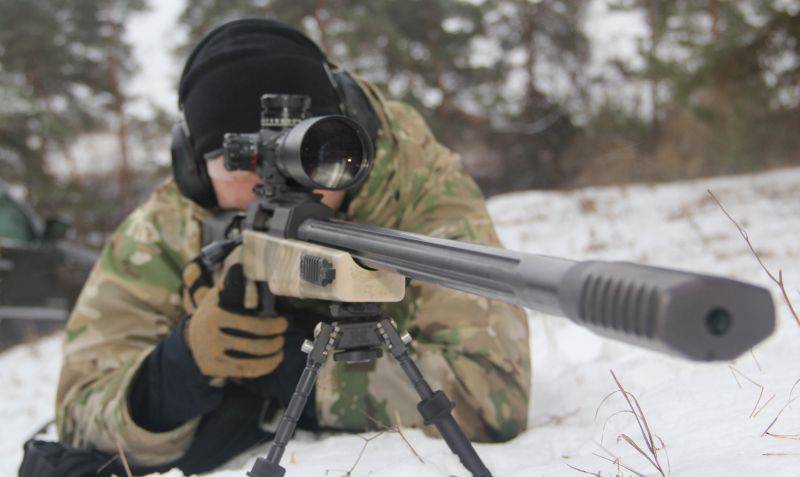 In recent weeks, of all the developments of the V. Lobayev team, the most frequently mentioned is the relatively new SVLC-14C rifle. It is a further development of existing ideas and, it is claimed, has uniquely high characteristics. The capabilities of the new rifle were demonstrated in mid-February, during a special show for journalists of the Russia Today and ANNA News news agencies. During this event, employees of Lobaev Arms demonstrated firing at a distance of 2 km. Two dozen test shots showed what the SVLC-14С is capable of. Expectedly such a show attracted the attention of both professionals and lovers of small arms.

According to the manufacturer, the SVLC-14C rifle represents a further development of the SVL rifle, introduced at the end of the last decade. In the design of the basic weapons were made some changes aimed at improving its characteristics when shooting at long distances. We can assume that the SVLC-14 rifle is a modification of the base SVL, designed specifically for attacking remote targets.

The SVLC-14C rifle has a classic architecture for such weapons. All the main units are mounted on the bed, made in the form of a multi-layer construction of fiberglass, Kevlar and carbon fiber. The design of the box was created taking into account the use of relatively powerful cartridges that impose specific requirements on the strength of the weapon assemblies. For additional reinforcement of the construction, the receiver and the barrel are attached not to the composite bed, but to the special aluminum chassis mounted on it. 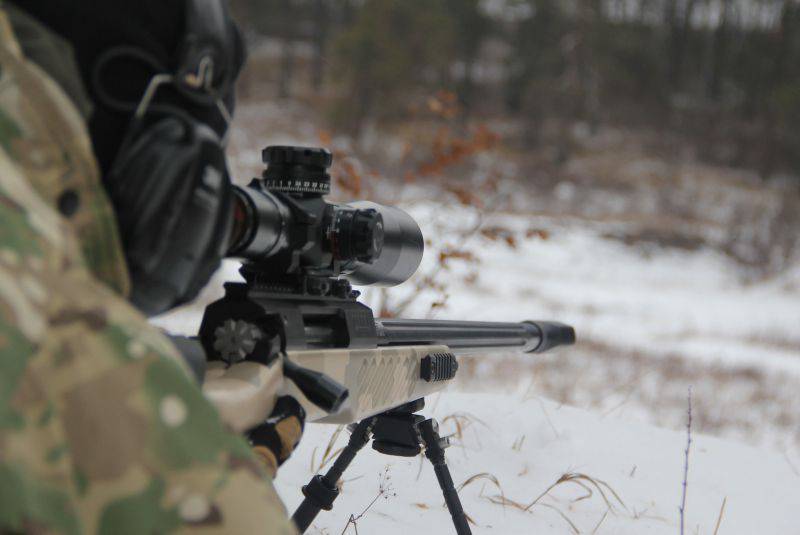 The main element of the rifle is the barrel of Lobaev Hummer Barrels, made of stainless steel. In the basic configuration, the SVLC-14 rifle is equipped with a rifled barrel with a length of 780 mm. On the side of the barrel there are six dale. At the front section of the barrel mounts are provided for the muzzle brake T-Tuner or similar equipment.

The barrel is fixed in the receiver-receiver, made of aluminum. In this case, the threaded insert of the receiver is made of high-alloy steel, resistant to corrosion. Inside the receiver is a longitudinally sliding bolt, also made of stainless steel. In the design of the rifle SVLCK-14С the bolt group of the King v.3 model is used. It is possible to use barrels and gates, designed for the use of several types of ammunition. For this, in particular, valves with several types of larvae are proposed.

The SVLC-14C sniper rifle is designed for long-range shooting, which affected most of its features. In particular, the need to ensure high rigidity of the structure forced the authors of the project to abandon any ammunition systems and shops. New rifle made in single-shot version. In preparation for the shot, the shooter must move the bolt to the rear position, place the cartridge in the receiver window of the receiver and move the bolt forward. Extraction of spent cartridges is carried out automatically when reloading.

The possibility of making three versions of the SVLC-14С rifle using different cartridges is declared. At the request of the customer can be supplied weapons chambered for .408 Cheytac, .338 Lapua Magnum or .300 Winchester Magnum. The base case is the .408 Cheytac rifle. All modifications are equipped with barrels with a length of 780 mm. The total length of the weapon is 1430 mm. The maximum width of the weapon - 96 mm, height (without bipod and sight) - 175 mm. The total weight of the rifle - 9,6 kg.

An interesting feature of the SVLC-14 rifle is the possibility of using additional equipment and adjusting the mechanisms in accordance with the shooter’s requirements. So, the design of the firing mechanism allows you to adjust the descent force in a fairly wide range - from 50 to 1500 g. To install sights and other equipment, the rifle is equipped with several Picatinny rail. The main is located on the upper surface of the receiver. Two more short strips are on the sides of the front of the box. There is a bipod mount. On the butt there is an adjustable cheek. 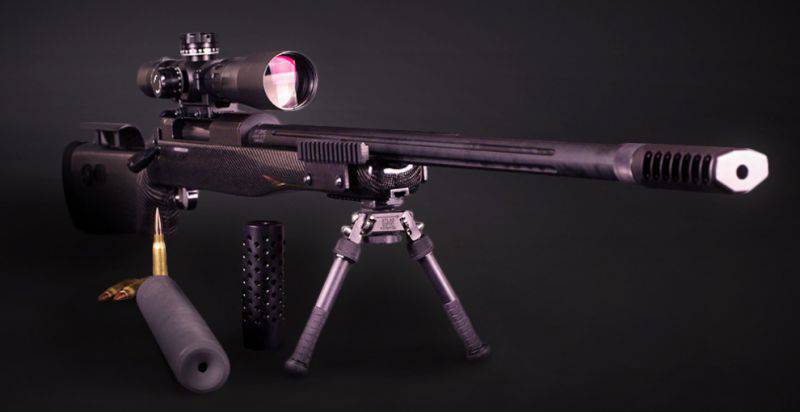 According to the manufacturer, the 780-mm barrel provides the initial speed of a bullet at the level of 900 m / s. In addition, the rifle has a sufficiently high accuracy. Technical accuracy of shooting is 0,3 MOA. This means that when shooting at a range of 100 m, the maximum distance between the centers of 5 hits does not exceed 9 mm. The maximum effective firing range is declared at the level of 2300 m.

19 February 2015 V. Lobaev and his colleagues organized a press show for film crews of two news agencies. During this event, gunsmiths checked the updated version of the SVLC-14С rifle, in which some improvements were applied. Adjustments were made to the design of the muzzle brake, changed the length of the barrel and the technology of the preparation of sleeves. On the eve of the Lobaev Arms company experts checked the new bullets of their own production, but so far they have decided not to show them to the press.

The aim of the shooting was to check the accuracy of the battle of the updated rifle in the version for the .408 Cheytac cartridge. The shooting was carried out from a distance 2000 m using cartridges equipped with a bullet J40 Lost River. It was noted that these bullets differ from each other in weight within the 0,9 Gran, which to some extent affected the results of the shooting. In particular, it was this particular feature of the ammunition that could cause the observed vertical deviation. In addition, the report of the experts noted that the rifle refinement led to a shift of the point of impact approximately 20 MOA, because of which there were some problems with pointing the weapon and making corrections using the existing sight Valdada.

The target was a shield with dimensions 1,5х1,2 m, installed in 2 kilometers from the position of the test shooter. For greater clarity on the shield secured dummy. In order to record the results at the shooting range, several video cameras were present, one of which was located three meters from the target shield.

On the shield was made 20 shots. The first two bullets went above the target, after which the shooters had to make an appropriate amendment. The remaining shots led to hit in different parts of the shield. There was some scatter over the entire area of ​​the shield, although the tester managed to make two series of two and three shots in which the bullets lay down at a short distance from each other.

Experts report that during the test firing rifle proved to be a good side and did not give grounds for any complaints. However, it is required to continue working on the ammunition. In particular, it was noted that the main reason for the spread of hits was not the side wind, but the different weight of the bullets, as a result of which the holes in the target shield had a large vertical distribution. Thus, further improvement in accuracy and accuracy can be achieved without any major modifications to the weapon itself, although it is required to continue work on ammunition.

Shortly after the press show with the tests of the updated version of the rifle, several publications appeared in the media. Knowing the public interest in high-precision small arms, some news agencies were not shy about the wording. In particular, in some publications it was said about setting a new record.

It should be recognized that the results of testing the updated rifle SVLCK-14С cannot be considered a record. First, in the world there are more long-range high-precision rifles, and secondly, this event was intended only to test the ideas used, but no more. For this reason, in particular, a number of special equipment, usually used for testing and fixing records, was not used in the shooting. Of all the equipment on the shooting range, there were only a few video cameras, a telescope and some other devices. Chronographs, DVRs and other special equipment were not used, which does not allow to consider shooting as a record. In addition, it should be noted that hitting a fairly large shield over the entire area also does not match the term “record”, at least in terms of accuracy and accuracy of shooting.

Thus, in the course of the shooting, which received the attention of the press, nothing outstanding was shown. Nevertheless, the declared characteristics and possibilities of the updated SVLC-14C rifle look very interesting. A few years ago it was reported that a number of SVL rifles of the first model were purchased by special forces of the Federal Guard Service. However, soon there was information about some of the problems associated with the resource of new weapons. After this order was completed, V. Lobayev and his colleagues left for the United Arab Emirates, where they continued their design activities.

In fact, lately, specialists and weapons lovers have not learned anything new about Lobaev Arms rifles. The new version of the SVLC-14C rifle is another development based on the long-known SVL, although it is interesting from a technical point of view. Nevertheless, it is already clear that the same problems are inherent in the new SVLC-14С that the previous weapon developed by the team of V. Lobayev.

The first problem is connected with the peculiarities of weapon production. The company Lobaev Arms can not boast a large production capacity, because of what the rate of release of weapons remains low. A company can manufacture and ship to customers no more than a few dozen rifles per year. The complexity of the production and features of the technologies used affect the price of the finished product. According to the official website of the KBIS, the SVLC-14 rifle in the basic configuration costs 650 thousand rubles.

Thus, having high enough characteristics, the new weapon of the Lobaev Arms company receives "inherited" from their predecessors some of their flaws. It can be said that, despite the advantages, the V. Lobayev rifles, including the new SVLK-14С, are at risk of remaining a piece product, produced exclusively for a few customers, both state structures and civilian shooters. However, the SVL series rifles will have to compete with numerous foreign developments of their class to take their place in the market.

With all its problems and shortcomings, the small arms of the Lobaev Arms and KBIS companies show one very important thing. The developments of V. Lobayeva and the company Orsis demonstrate that domestic small arms can be created not only by recognized industry leaders, but also by small private companies with enthusiasts at the origins. Naturally, such organizations will not be able to immediately enter the market and win a place from the leaders. Nevertheless, in this case it is necessary to evaluate not only the result, but also the fact of attempts to challenge competitors by creating their own designs. It cannot be ruled out that it is this approach that in the near future will allow the domestic defense industry to create a new weapon with uniquely high characteristics, not only not inferior, but also superior to foreign competitors. However, this is a matter of the distant future. In the meantime, gun enthusiasts should continue to work and improve their development.